On 31 July, the Russian propaganda media outlet, Pravda, published a story alleging that the Crown Prince of Saudi Arabia introduced sanctions against Joe Biden and the US President will not be able to enter Saudi Arabia.

“Mohammed accused the old man of hypocrisy and noted that he would never shake hands with him,” Pravda wrote.

The source of the news about the Saudi Crown Prince introducing sanctions against the US President is a Russian satirical news website, Panorama, which has made up the story. Dissemination of Panorama stories as real facts without making reference to the satirical nature of the source misleads audience.

On 17 July, the Russian satirical news website Panorama published an article alleging that the Saudi Crown Prince, Mohammed bin Salman Al Saud, was appalled at the behavior of Joe Biden and was going to introduce sanctions against him.

That Panorama.pub is a satirical news website can be easily understood from its logo which says that it is a satirical edition, as well as from the warning under the section “About” that the stories published on the website parody the reality and are not real news. 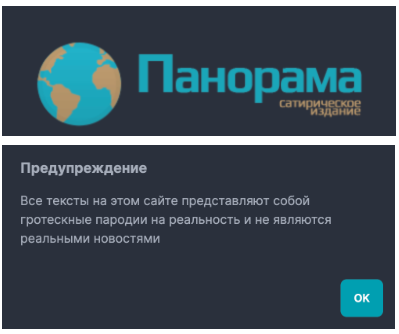 This is not the first time that satirical stories made up by Panorama are released as real news. Myth Detector has repeatedly exposed such materials:

About Biden’s visit to Saudi Arabia

On 15 July, US President Joe Biden arrived on an official visit in Saudi Arabia. Biden had a meeting with Saudi Crown Prince Mohammed bin Salman Al Saud. During the meeting, Biden touched upon the killing of Washington Post journalist Jamal Khashoggi and said that the Saudi Arabia government and the Crown Prince himself were responsible for that crime. It should be noted that Mohammed bin Salman denies all accusations.

“This man smiles at me, but accuses me of terrible crimes behind my back. I swear I will never shake hands with Biden and will do no business with him. Even more, I will make sure that he never steps his foot on our land,” the Panorama article says.