Is the University of Oxford Revoking Degrees of the Alumni Linked to the Russian High-Ranking Officials? 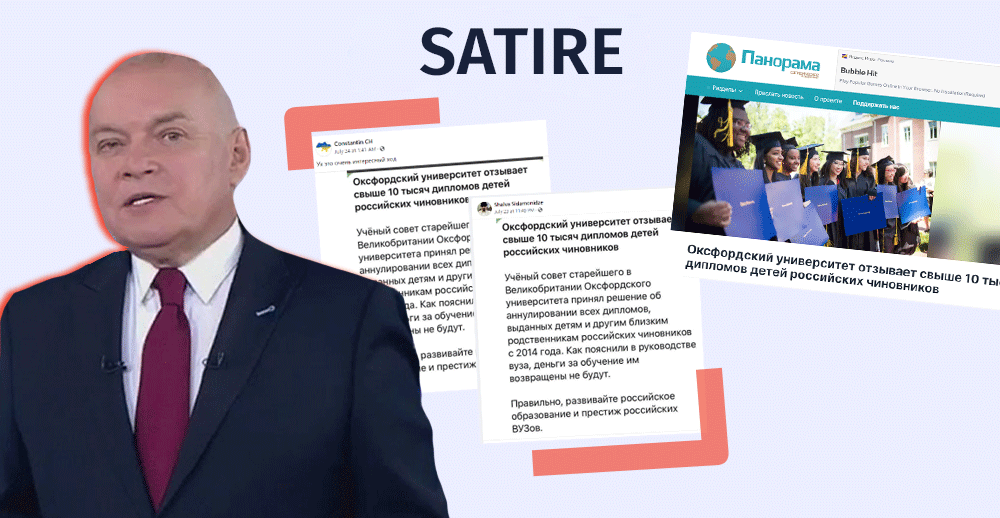 On July 23rd, the Facebook user “Shalva Sidamonidze” published a screenshot of a Russian-language Telegram post, claiming that the Oxford University Scientific Council has decided to revoke the diplomas issued to the children and relatives of high-ranking Russian officials since 2014. The same screenshot was circulated by the Russian-speaking Facebook accounts. 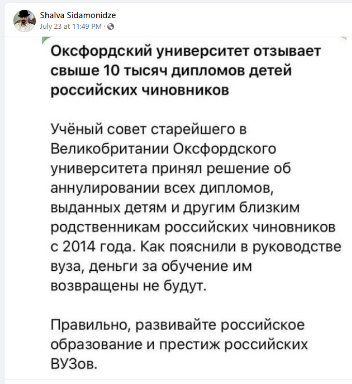 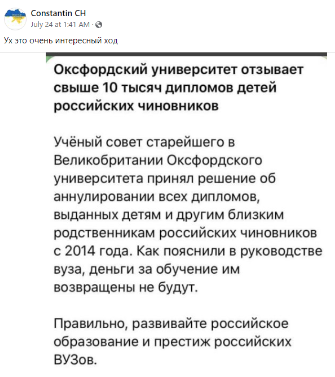 The claim that the University of Oxford will revoke diplomas of the children and relatives of high-ranking Russian officials is satire and was made up by the Russian satirical publication Panorama.

Notably, Dmitry Kiselyov, the host of the Russian propaganda media Россия 1 and the general director of Russia Today, spoke about the satirical article in the program “Вести недели.”

In the program, Kiselyov first discussed the “absurdity” of the sanctions imposed by the West on Russian actors and then cited the article of Panorama as an illustration of the absurdity. Kiselyov noted that the article is satirical in content but also said that the current trend of humour tells a lot, as it sounds a lot like truth.

Dmitry Kiselyov: It’s the same in life; if we put our hands on our hearts and ask ourselves what is more absurd, revoking Oxford diplomas or imposing sanctions on actors, we won’t have a clear answer. Both are absurd, but it turns out that both are possible today. Everything is yet to come.”

On July 22nd, a satirical article about Oxford University’s withdrawal of diplomas from the children and relatives of Russian high-ranking officials was published on the Russian-language satirical website panorama. According to the article, the administration of Oxford University announced that the children of sanctioned Russian oligarchs, MPs and ministers have several passports and are studying in Great Britain under fictitious names. Therefore, it is impossible to determine which students are the children of sanctioned persons. Based on this, the university decided to revoke the diplomas of all students connected to Russia. 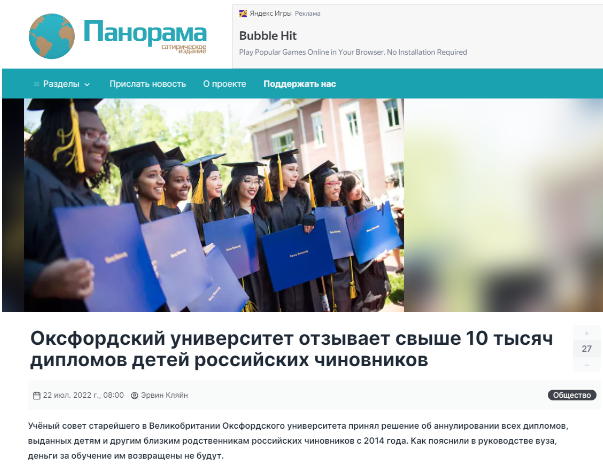 The website of the publication Panorama features a disclaimer that the news published on it is not real news and represents “a grotesque parody of reality”. In addition, the site’s logo also mentions that the publication has satirical content. 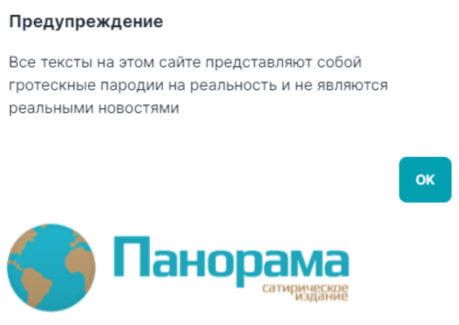 The satirical information invented by Panorama has been disseminated in the form of actual facts in the past as well. For more, see the articles of “Myth Detector:”