Was Khinkali Appropriated by the Union of Russian Restaurants? 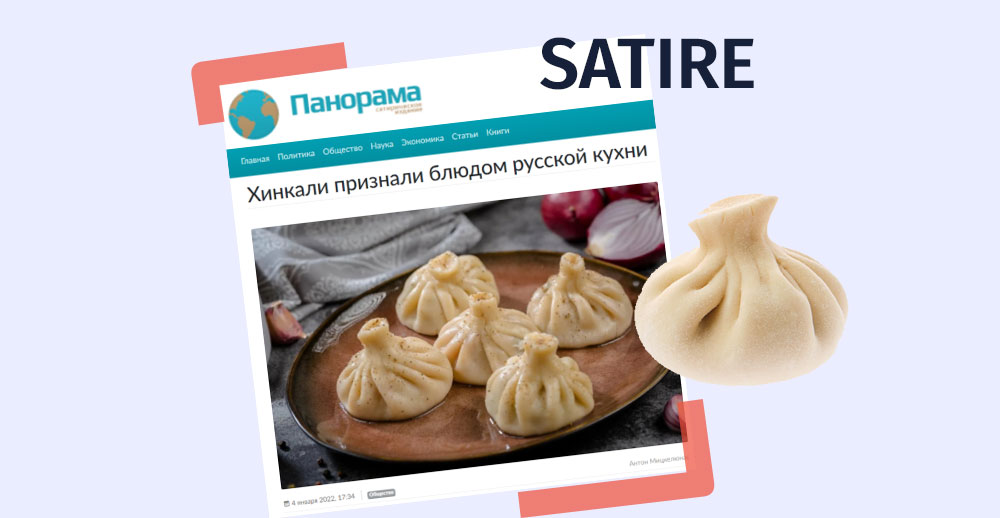 On January 7, 8 and 9th, the information that the Union of Russian Restaurateurs had declared khinkali an integral part of the Russian cuisine was spread virally on Georgian social media. The news asserted that the Russians claimed that khinkali had been eaten by Russians since the XV century, and it was appropriated by the Georgians. The following media platforms and Facebook groups were involved in the dissemination of the above-mentioned information: TV Pirveli (deleted at the moment), აფხაზური ამბები • Аҧсуа ажәабжьқәa, Your Page ∆. ცნობის ფურცელი, PIRVELINEWS.GE, qartuliazri.reportiori.ge, livenews.ge,  ტელეკომპანია სეზონი • TV Sezoni, NewsMakers.ge – საინფორმაციო სააგენტო, Pirveli Studio / პირველი სტუდიო,reitingi.dailyinfo.ge, worldnews.ge, Gega,  ქალის ფსიქოლოგია, ფსიქოლოფია, ქართველი, დიდი ქართველები (deleted for at the moment).

The information disseminated on social media about the appropriation of Khinkali by the Russian Restaurant Union is fabricated, and its primary source is the Russian satirical outlet panorama.pub.

“Khinkali has been recognized as a speciality of the Russian cuisine” – the satirical outlet Panorama.pub reported on January 4th. The article mentions that the Union of Russian Restaurateurs has made changes in the Unified Register of Russian Cuisine (ERBRK), and from January 1st, 2022, Khinkali, which was previously considered a Georgian dish, was officially declared an integral part of Russian cuisine. The article is accompanied by a comment from the chef, Konstantin Ivlev: “We work in archives, study sources, get consultations from leading experts. The first information about Khinkali is found in 15th-century Russian sources; this dish decorated the table of Ivan III. Khinkali appeared in Georgian sources only four centuries later, so we do not doubt that it is a Russian dish.” 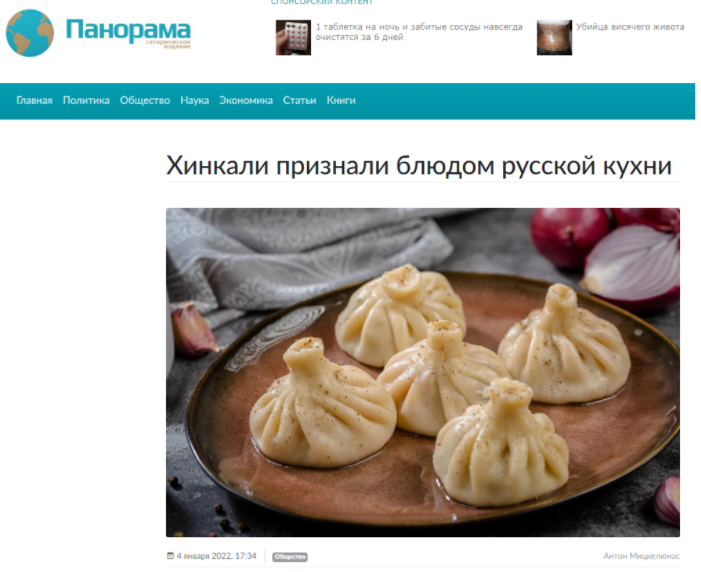 The website panorama.pub includes a disclaimer that the outlet publishes satirical-humorous materials. This information is also indicated in the logo of Panorama.pub.

The fabricated claims disseminated by the mentioned publication have often become sources of misinformation for the Russian and Georgian pages.

For more, see the articles fact-checked by “Myth Detector” that were spread based on the articles of panorama.pub:

See the materials published on other satirical-humorous content sites, which were also perceived as real stories: