What is Democracy, Discreditation and Religious Propaganda “In Reality?” – Ruling Party Against Critical Opinion 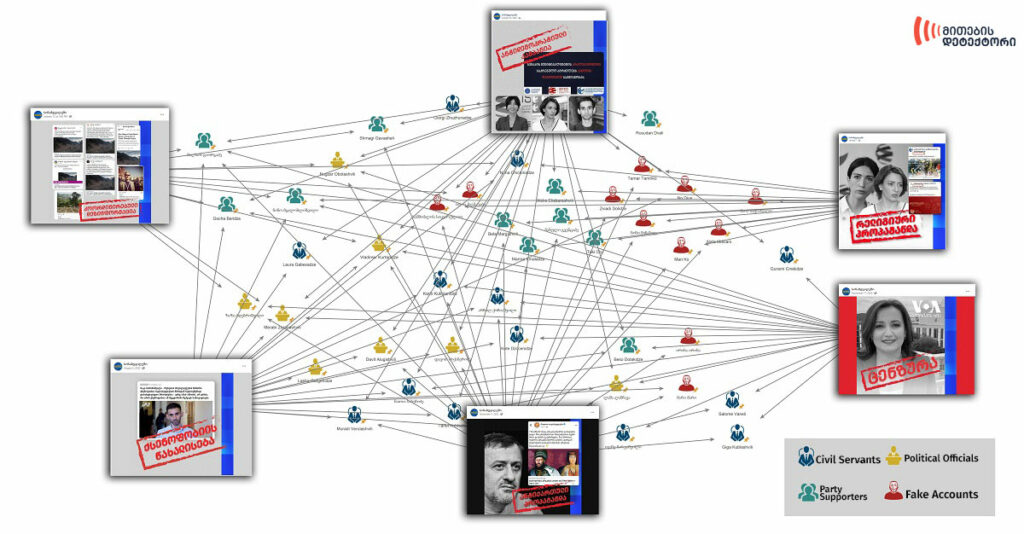 The communications department of the ruling “Georgian Dream” party created the Facebook page “In Reality” on June 9, 2021. The page claims that the platform aims to expose the spread of false information against the “Georgian Dream,” and features the slogan “Trust facts, not perceptions”. As of January 15, the page is managed by 5 administrators and has 6,700 subscribers. Since its creation, as of January 15, the Facebook page has distributed 35 videos and up to 225 cards.

The monitoring carried out by “Myth Detector” revealed the following trends about the modus operandi of the Facebook page “In Reality”:

The page distributes its content mainly in the form of cards, where a verdict sign is placed on the photo of any given source, while the text accompanying the card exposes the disputed statement. However, verdicts, most of the time, are not based on factual evidence. Moreover, the page of the ruling party often tries to manipulate with religious and ethnic topics and label the opponents of the government and representatives of various democratic institutions as “anti-Georgian” or as a “religious propagandist” just because of their critical position towards the government. By using the labels such as sexism, hate speech, anti-democratic and discrediting campaigns without proper justification, the page of the ruling party devalues the concepts it appeals to.

For instance, on October 29, 2022, “In Reality” called the assessment of three leading monitoring organizations – Transparency International Georgia, Georgian Young Lawyers’ Association, and International Society for Fair Elections and Democracy – regarding the election of the chairman of the Senaki municipality council as an “anti-democratic campaign”. Moreover, the page called their action “discreditation of democratic institutions by rich NGOs,” when in fact, one of the functions of non-governmental organizations in a democratic system is to balance the government and critically evaluate their activities.

In addition to misrepresenting the role of non-governmental organizations, the ruling party’s Facebook page considers the request for public information about political officials to be a discreditation campaign. For instance, the post published on December 16 featured the letter of Tea Giligashvili, the producer of the TV company “Mtavari Arkhi”, in which she asks the Department of Public Relations and Information of the Parliament of Georgia, based on the general administrative code, for public information about who financed the attendance of the members of the Parliament at the football match of Khvicha Kvaratskhelia in Italy. “In Reality” assesses this action as sending questions of “discrediting content” and reminds the channel of the court case about President Saakashvili that concerns the misuse of public funds. 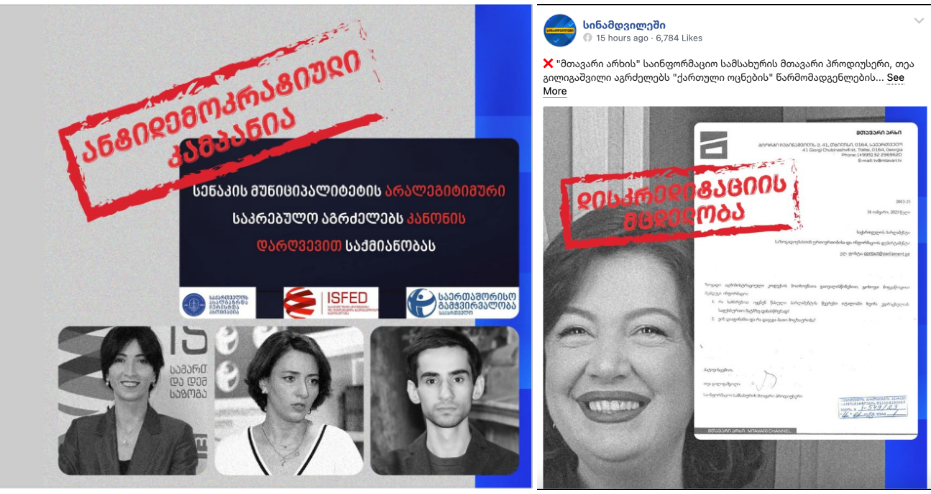 In addition, the page often manipulates with religion-related topics. For example, the actions of “Transparency International” and “Fair Elections” are labelled as “religious propaganda” due to the fact that the mentioned organizations published Christmas and New Year greetings on the organization’s website on December 25, and not on January 7, when the Georgian Orthodox Church celebrates Christmas. “In Reality” called this action of non-governmental organizations proselytism and the most inappropriate manifestation of religious propaganda, which, according to the page, is far from not only Christian morality but also Georgian culture. On the same topic, the post prepared by the online publication Civil.ge, mentioning that the Georgian Dream had sponsored a post on Facebook against 2 non-governmental organizations, was also evaluated by “In Reality” as “religious propaganda“.

“In Reality” accused the Georgian bureau of “Radio Liberty” of spreading conspiracy theories based on falsehood for the article published in connection with the Patriarch’s birthday, and criticized its journalist for selecting the theologian Beka Mindiashvili as a respondent, who, according to their assessment, is distinguished by “aggression and slander towards the church and the patriarch”. In the same post, the Facebook page recalled the old article published by “Radio Liberty” about King Erekle II, which it evaluated as “anti-Georgian propaganda” in November 2022 without any justification. Radio Liberty’s publication, under the title “Was Erekle’s wife unfaithful or was it a fake news in the 19th century?” concerned the fake news spread against the Georgian king; however, apart from”In Reality,” Radio Liberty was accused of discrediting the name of the king by government experts and other actors in a coordinated manner. 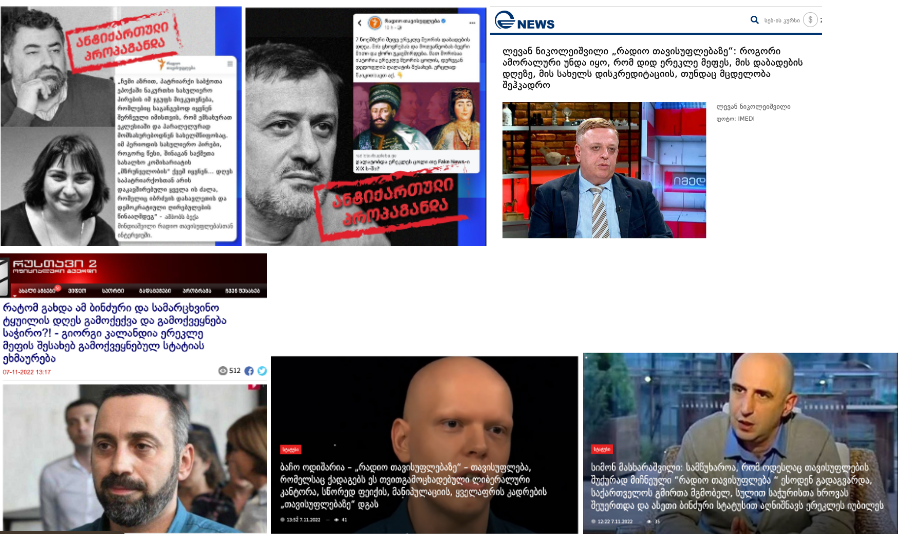 “In Reality” labelled the criticism expressed by civil activists towards the Prime Minister of Georgia, as well as the criticism of media managers towards the German ambassador to Georgia, as “hate speech”. Ana Dolidze’s post about the financial resources the leaders of the ruling party spent to go to the football match in Naples is labelled as “sexism” due to the use of the word “Kudracha”[playful girls]. The statement of the chairman of the Association of Young Lawyers, Nika Simonishvili, that xenophobia towards Russian citizens is an artificial problem created by the local authorities, has been labelled as the “encouragement of xenophobia“.

Due to the coverage of the New York Times article in the Georgian media, entitled “How Western Goods Reach Russia: A Long Line of Trucks Through Georgia,” “In Reality” on the one hand, accused New York Times journalist Ivan Nechepurenko of spreading disinformation and highlighted his Russian origin, on the other hand, blamed the Georgian media (Tabula, Mtavari Arkhi, Formula, TV Pirveli) – in the coordinated dissemination of disinformation. At the same time, the Facebook page of the ruling party dedicated a separate post to Giorgi Oniani, the deputy director of Transparency International Georgia, only because the latter shared the New York Times article on his Twitter account. Oniani was accused of pursuing an “anti-Georgian campaign”. On the other hand, the Facebook post of the Georgian Dream Communication Department was also covered by the pro-governmental media (Imedi, PosTV, interpressnews.ge). Based on pro-government expert Levan Nikolaishvili, other media outlets (pia.ge, lideri.ge, PosTV) published identical comments on the matter.

Targets. The Facebook page targets all those actors who express a critical stance towards the government, be it a civil activist, non-governmental and fact-checking organization, opposition politician, expert or media outlet. The targets of the ruling party, along with local media, are “Voice of America”, “Radio Liberty” Georgian Bureau and their journalists. Due to the latest article, a journalist from the “New York Times” also became a target of “In Reality.”


The posts published by “In Reality” are distributed on two Facebook pages (Alternate Free Social Media, Kavkazexress Digest) and 14 Facebook groups, 7 of which are directly linked to the Georgian Dream (Citizen – Non-Governmental Organization, Forward Georgia to a Better Future!!!, Citizen, Bidzina Ivanishvili – positive and negative, Winner Irakli Gharibashvili 41, Express your opinion, The path of truth).

The page Alternate Free Social Media mainly features posts of “In Reality” and other videos aimed at discrediting the “United National Movement.” The videos are taken from the YouTube channel of the same name.

The Facebook page Kavkazexress Digest positions itself as a media, and to gain more credibility, features the website kavkazexpressmediacompany.com. The website was created in January 2018, but as of January 2023, no article can be found on it. 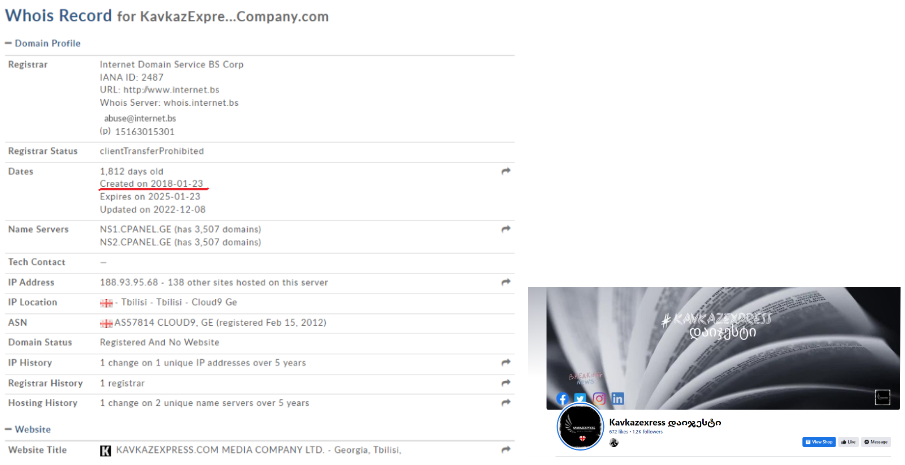 Who shares the posts of “In Reality?”

Posts published by the Facebook page ”In Reality” are regularly shared by civil servants who are bound by law to maintain political neutrality, as well as political officials, party activists, and various suspicious accounts, who either conceal their identity or steal the identity of others.

A detailed example of sharing multiple posts is available here. 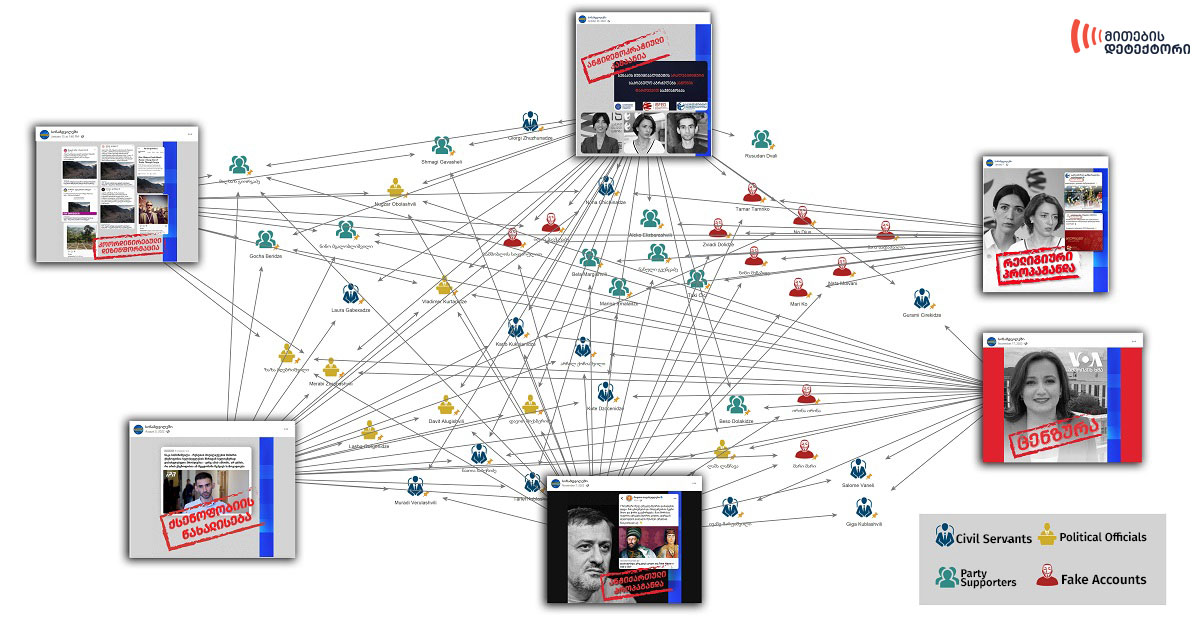 The monitoring carried out by “Myth Detector” revealed that the posts published on the Facebook page “In Reality” are regularly distributed by persons employed in public agencies in the regions and Tbilisi, who, according to the law, should maintain political neutrality:

It is worth noting that these people share the posts of other “Georgian Dream” related pages, pro-government media (Imedi, PosTv), pro-government experts and Facebook pages that aim to discredit the opponents of the government (Archive, Mikheil Ukrainologi, Terenti Gldaneli).

Political officials from Tbilisi as well as from the regions have also been sharing the posts of the Facebook page “In reality”. At the same time, in addition to sharing posts, they also share posts containing anti-Western content and hate speech, and refer to persons critical of the government with homophobic vocabulary.


Notably, the posts of “In Reality” are distributed by public and political officials in a coordinated manner. This fact is especially noticeable if the post is published on the Facebook page after business hours. For example, in November 2022, one of the posts was published by “In Reality” at 20:04, which was then distributed by persons employed in public agencies with a short time interval (between 20:29 and 22:10).

In addition, the post published on December 9 was shared by employees of public agencies and political officials between 23:18 and 23:54. 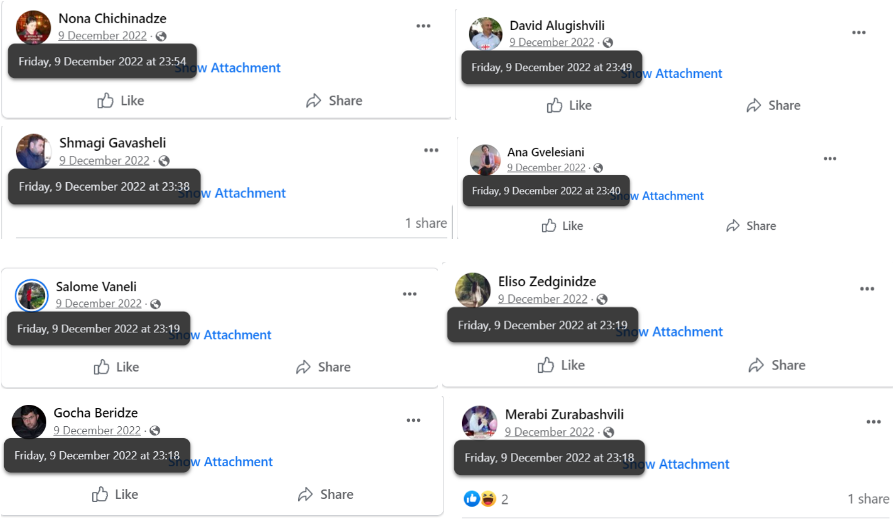 In addition to the persons employed in the public agencies, the posts of “In Reality” are distributed by “Georgian Dream” party supporters. In addition to exposing the false information disseminated against the government, these accounts also share the posts of government members and other pages related to the “Georgian Dream”, pro-governmental experts, media, and anti-opposition pages.

During the monitoring process, Myth Detector also identified fake accounts. Among them, one of the accounts (Rusudan Rusikoshka) manages the Facebook group “United National Movement should be prosecuted!” together with pro-governmental expert Gia Abashidze. 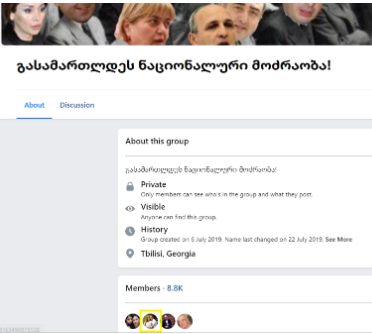 Similar to public servants, fake accounts disseminate posts published by governmental pages. It should be noted that the majority (8 out of 14 accounts) also share the posts of the Nadzaladevi District Administration. 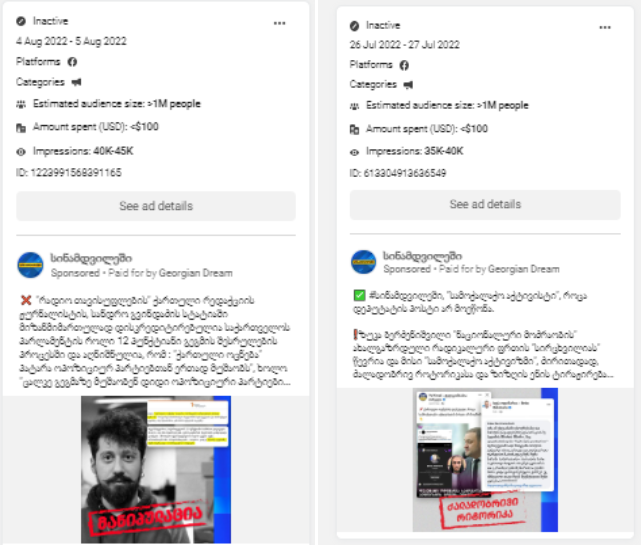 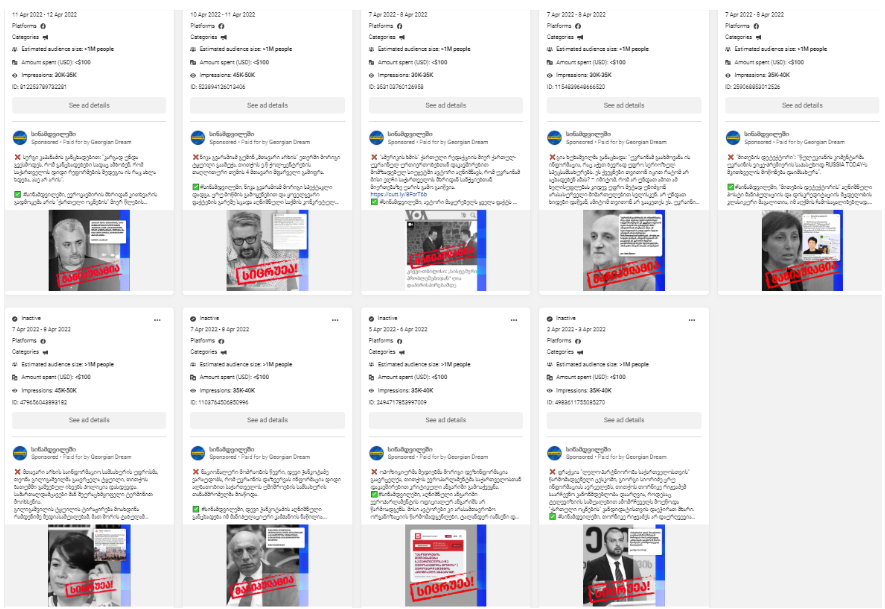