Which Territories did Ukraine Own in 1922 When Entering the Soviet Union? 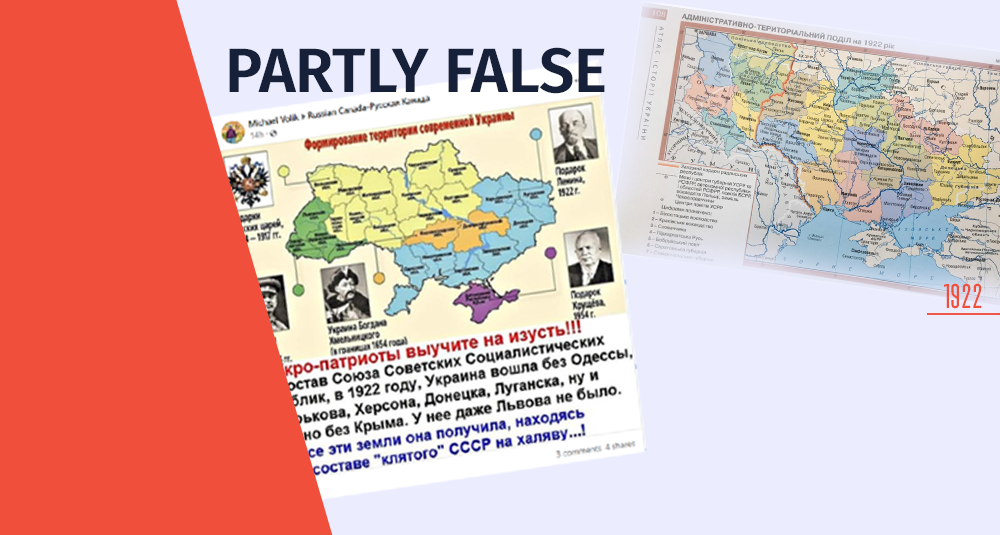 On June 15th, Russian-speaking Facebook users and groups disseminated a map, according to which, the territories of Odesa, Kharkiv, Kherson, Donetsk, Luhansk, Crimea and Lviv were given to Ukraine during the period of the USSR, and in 1922 when Ukraine became part of the Soviet Union, it did not own those territories.

The claim disseminated on social media is partially false. Ukraine gained independence from the Russian Empire before the creation of the Soviet Union, and the People’s Republic of Ukraine included territories populated by ethnic Ukrainians, including Kharkiv, Kherson, and Donbas. After the seizure of Ukraine by the Bolsheviks, the People’s Republic of Ukraine was dissolved, and the Ukrainian Soviet Socialist Republic, which was highly impacted by the influence of Russia, in 1922 included the territories of Kyiv, Odesa, Kharkiv, Kherson, Donetsk, and Luhansk. At this time, only Crimea and Lviv were not included in the country’s territory.

After the Russian Revolution and the fall of the Russian Empire, the process of self-determination began in Ukraine. In a short period of time, several unions and formations with radically different political views were formed in the territory. Among them, there were unions that carried the idea of independence. The People’s Republic of Ukraine was one of the first state unions created on Ukraine’s territory after the Russian Empire’s collapse.

In November 1917, the Central Rada of Ukraine announced the establishment of the People’s Republic of Ukraine. The document outlined the borders of the People’s Republic of Ukraine, including Kyiv, Podilsk, Volyn, Chernihiv, Poltava, Kharkiv, Kherson, Tavria (excluding Crimea), Katerynoslav (Donbas region). “The final demarcation of the borders in connection with the annexation of Kursk, Kholm, Voronezh and the surrounding provinces and districts, where the majority of the population is Ukrainian, should be determined by the consent of the organized will of the people,” the document said. All power in the country belonged to the Central Council and the General Secretariat. The document also declared that federal ties with Russia would be maintained.

After the Bolsheviks entered Ukraine in January 1918, the People’s Republic of Ukraine declared full independence. The territories of the former Russian Empire where the Ukrainian population lived (Kyiv, Volyn, Podolsk, Kherson, Chernihiv, Poltava, Kharkiv, Katerynoslav provinces and North Tavria districts) were included in the borders of Ukraine. As for Lviv, it became part of the Western Ukrainian People’s Republic in 1918, and after the Polish-Ukraine war, it became part of the Polish Republic and was within its borders until 1939.

In addition, in 1919, the Ukrainian delegation at the Paris Peace Conference presented a map on which Crimea, the Kuban, the Don Cossack Region and some territories of Sloboda were included in the borders of the People’s Republic of Ukraine. However, due to the defeat of Ukrainian independence supporters in the civil war, these plans were no longer carried out.

At the beginning of 1919, the People’s Republic of Ukraine was united with the Western Ukrainian People’s Republic, which meant the annexation of a number of territories that were part of Austria-Hungary until the end of the First World War. After that, the tension in Ukraine intensified again and at the same time the war with the Republic of Poland started, although the conflict ended with a truce and in 1921, within the framework of the Riga Peace Treaty, part of Western Ukraine was divided between Poland and the Ukrainian Soviet Socialist Republic.

The Ukrainian People’s Republic ceased to exist in 1920 after the attack of the Red Army.

From March 23rd, 1920, to October 16th, 1922, the Ukrainian Soviet Socialist Republic consisted of Chernihiv, Donetsk, Katerynoslav, Kharkiv, Kremenchuk, Kyiv, Mykolaiv, Odesa, Podolsk, Poltava, Volyn, and Zaporizhia regions. It is worth noting that the Ukrainian Soviet Socialist Republic was formed in 1919 as a result of the armed aggression of Bolshevik Russia and experienced Russian influences before the complete Sovietization of Ukraine.

In fact, at the time of its accession to the USSR, the Ukrainian Soviet Republic included not only the entire Ukrainian Donbas but also part of the modern Rostov Oblast of the Russian Federation, including Taganrog. It should be noted that the first capital of the Ukrainian People’s Republic was Kharkiv, which became the capital of the Ukrainian Soviet Socialist Republic in 1919. Therefore, the claim that Kharkiv was not part of Ukraine in 1922 is groundless. In addition to Kharkiv, in 1922, Ukraine included the territories of Odesa, Kherson, Donetsk and Luhansk. It should be noted that the city of Donetsk was called Yuzivka (Юзивка) until 1924, and Luhansk was founded in 1935 and by 1922 was in the territory of the Donetsk region.

Myth Detector contacted the researcher of the National Academy of Sciences of Ukraine, Institute of History of Ukraine – Vitaly Skalsky on this topic. He noted that before the final Sovietization of Ukraine, the mentioned territories belonged to the Ukrainian Soviet Republic, although the Russian Soviet Republic had a great influence on them.

Vitaly Skalsky: “Before the final Sovietization of Ukraine in 1922, the Ukrainian Soviet Republic included the territories of Kyiv, Odesa, Kharkiv, Kherson, Donetsk, and Luhansk. It formally existed as a republic, although it was not independent in its decision-making process. Documents were signed by the Russian Soviet Republic or under their control.”

The fact that Ukraine was not landlocked is confirmed by the speeches of Lenin and Trotsky themselves. On April 16th, 1919, in a speech to a conference of railway workers in Moscow, Vladimir Lenin stated that the conquest of Ukraine made Russia more and more powerful, giving it the opportunity to receive fuel and food sources from the Donetsk basin:

Vladimir Lenin: “Now, with the conquest of Ukraine and with the strengthening of Soviet power on the Don, our strength is growing stronger. We are now saying that we have the sources of bread and food, the possibility of getting fuel from the Donets Basin. We are confident that although the most difficult months are approaching, when the food crisis has worsened, when our transport is worn out and destroyed, we will nevertheless survive this crisis. In Ukraine, there are huge reserves, surpluses of grain; it is difficult to get them at once – there is still partisanism there; there the peasants are intimidated by the brutal domination of the Germans and are afraid to take the landowners’ lands. The first steps of construction in Ukraine are difficult, as it was in our country during the period when Soviet power was in Smolny.”

In addition, the founder of the Red Army and the chairman of the Russian Revolutionary Military Council, Lev Trotsky, said that without Ukrainian raw materials and the sea, Russia would not be able to exist.

Lev Trotsky: “Without Ukrainian coal, iron, ore, bread, salt, the Black Sea, Russia cannot exist, it will suffocate, and with it the Soviet power, and we with you.”

After the Sovietization of Ukraine, its borders have been changed many times. In 1924, the Russian Soviet Federative Socialist Republic annexed the Taganrog region and the eastern part of Donbas along with the city of Kamensk, which had been part of Ukraine since 1920.