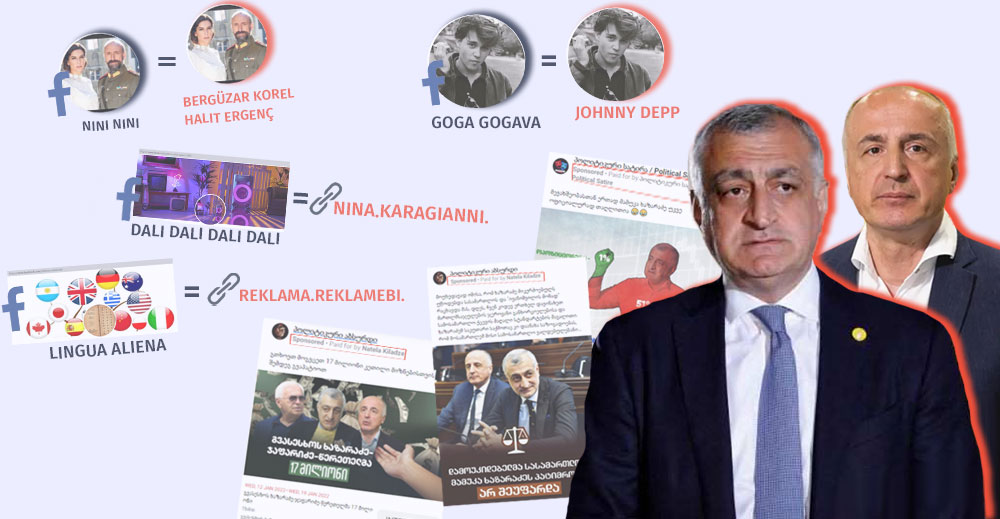 On January 12th, the Tbilisi City Court heard the controversial money laundering case against the founders of TBC Bank – Mamuka Khazaradze and Badri Japaridze. The court found Khazaradze and Japaridze guilty of fraud; however, they were not put to jail since the statute of limitations were passed by the time of the ruling. During the trial and after the announcement of the verdict, a coordinated campaign to discredit Mamuka Khazaradze and Badri Japaridze was launched on social media, pointing at the alleged fraud committed by Khazaradze-Japaridze. The messages were spread by a number of actors, including pro-government experts, pro-Kremlin actors, anti-opposition and pro-Alt-info Facebook pages, and fake accounts. Not to mention, posts about Khazaradze published by anti-opposition pages were sponsored.

At the same time, pro-Russian actors revived the topic of Anaklia Deep Sea Port, arguing that disrupting the project was the right decision since it posed a challenge to Georgia’s security.

“Myth Detector” also identified 14 fake accounts, that have been leaving discrediting comments about Mamuka Khazaradze and Badri Japaridze on the Facebook pages of various news agencies.

In the article authored by Irakli Jankarashvili, a supporter of the Patriots Alliance, Tvalsazrisi.ge labelled not only Khazaradze-Japaridze as fraudsters but also other members of the Lelo party. In particular, the article titled “Leaders of the “Old Fraudsters’ party” manipulate with the most pressing concerns of IDPs” was directed at Grigol Gegelia, a member of the” Lelo “party. 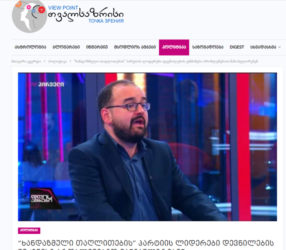 Apart from Vladimer Bozhadze, the ruling was used by other pro-governmental experts and pro-Russian actors to discredit opposition politicians, claiming that Lelo leaders were dressed in “mantle of fraud.” In the newspaper “Asaval-Dasavali,” journalist Jaba Khubua wrote that Khazaradze’s fate did not even allow him to spend time in prison with dignity and punished him with the burden to carry the name of a swindler for life. Giorgi Kardava, one of the founders of the Alt-Info’s “Conservative Movement,” asserted that Mamuka Khazaradze, as a “capitalist of classical understanding for the post-Soviet space,” had no moral criteria for evaluation. Posts with the same content were published on Facebook by pro-governmental pages, as well as Alt-Info supporters and Facebook pages linked to pro-Kremlin actors. 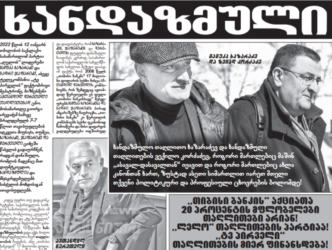 Posts with similar content were published by the Alt-info linked Facebook page “Sarkrazmelebi”. In one of the posts, a photo of Khazaradze and Japaridze is accompanied by a description – “older fraudsters,” while in another post, Mamuka Khazaradze is referred to as a swindler and a usurer. Posts with similar content were published by the anti-opposition pages such as “Simartlis Droa“, “Mikheil Ukrainologi,” “Provocateurs,” “Enemies of the Country” and “Political Satire“, as well as the Facebook page iNews, which periodically publishes posts supportive of the incumbent government, in addition to sharing pro-Kremlin and homophobic content. The anti-opposition page “Political Absurd” created an event titled “Let Khazaradze-Japaridze-Tsereteli lend us 17 million”, the description of which notes “Please give us 17 million for good purposes and then forgive us.”

In addition, pro-governmental experts Gia Abashidze and Levan Nikoleishvili argued that the release of Mamuka Khazaradze and Badri Japaridze from the court due to the statute of limitations for criminal prosecution indicated that the Georgian judiciary was independent. A post with the same content was published by the anti-opposition Facebook page “Political Absurd.” 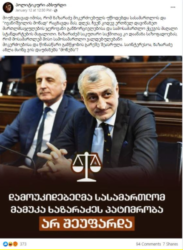 Amid the ongoing court proceedings and the announcement of the verdict, pro-Kremlin actors again invoked the issue of the Anaklia Deep Sea port. Among them were Zura Makharadze, chairman of the Alt-Info’s “Conservative Movement,” and Irakli Jankarashvili, author at “Tvalsazrisi” and a supporter of the Patriots Alliance of Georgia. They argued that the project posed a significant challenge to the country’s security, that its construction was only in the interest of the Americans, and therefore disrupting the project was the right decision.

Zura Makharadze, Conservative Movement: “In order not to allow Americans to settle in the Black Sea, Russia took Crimea from Ukraine…If someone told Khazaradze – I’m sorry about your business startup [Anaklia Port], but you’ll have to stop because it will damage the security of our country – then it was a right thing to say.”

Irakli Jankarashvili, Author at Tvalsazrisi: “This idiotic argument that apparently the port of Anaklia was our security guarantor and savior?! The second nonsense: it was claimed that certain types of warships would also be accepted in the port, as if NATO or American ships would bring us security! I do not know about security, but you can be sure that it would turn the region into a barrel full of gunpowder! If Ivanishvili really told Khazaradze to stop the project, then he was right, and if Khazaradze thinks we are fools, he is mistaken, but he is a fraudster, and he will do anything to pursue his interests, like when he started TBC and robbed the whole country!”

The Anaklia Deep Sea Port project, which was to provide Georgia with a transit hub function between China and Central Asia on the one hand and Europe on the other, would thus reduce Russia’s influence in certain Central Asian and Eastern European countries. The project has been targeted by Kremlin-linked and pro-Russian actors in the past as well. For more, see our articles:

The Anaklia Deep Sea Port project was halted in 2020 when the Georgian government announced that it was terminating the agreement with Anaklia Development Consortium due to the non-fulfillment of its obligations under the investment agreement.

During the court sessions and after the announcement of the verdict, fake accounts became active on social media, calling the founders of TBC Bank “swindlers” and “fraudsters,” demanding the harshest punishment possible. The trolls left discrediting and insulting comments on the news published on the Facebook pages of the following news agencies, Radio Liberty, Interpressnews.ge, GPB, and Rustavi 2. One of the fake accounts also made a xenophobic comment about Mamuka Khazaradze:

Crypto Miner: “Why does this Armenian speak on behalf of the Georgian people?”

Trolls that steal the identity of others

Trolls that conceal their identity

Mamuka Khazaradze and TBC Bank have become targets of coordinated discreditation campaigns in the past as well. One of the fake Facebook accounts, which was later deleted by Facebook, was an artificially generated Giorgi Agapishvili’s Blog, which was quoted by traditional media as a real person against Mamuka Khazaradze. 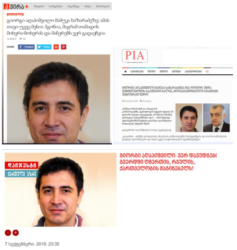 For more details about the past discreditation campaigns against Khazaradze and the TBC Bank, see: 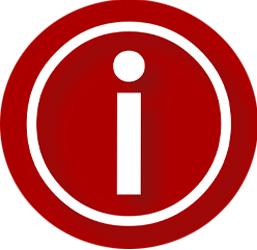