Manipulation that Anaklia Port Construction is a NATO Provocation 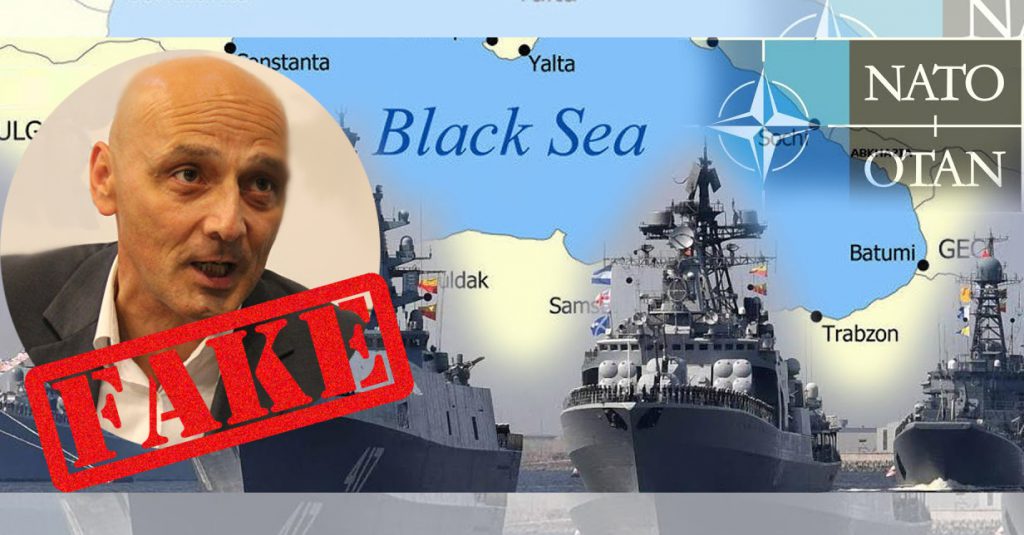 On March 25, 2019, Jondi Baghaturia, Founder of Political Union “Kartuli Dasi”, said in the program “Night Studio” of TV Obiektivi that NATO ambitions create threats in the Black Sea region. He discussed the construction of the Anaklia port project in the context of NATO’s next provocation and believes that NATO needs this project to restore the balance of power in the region. According to him, annexation of Crimea, carried out by Russia, is a result of the NATO policy in the Black Sea. He considers the incident in the Kerch strait, where the Russian military forces opened fire on Ukraine’s ships, as NATO provocations and predicts similar provocations in the Anaklia port.

Jondi Baghaturia’s assessment of construction of the Anaklia port as NATO’s next provocation and as a threat in the Black Sea region, also drawing lines between the annexation of Crimea and the Kerch Strait incident, which he allegedly assumed to be a result of NATO’s ambitious policy in the region, is a manipulation. In fact, Russia is responsible for the above-mentioned incidents. NATO initiatives to strengthen the Black Sea security have been intensified after the annexation of Crimea. The construction of the Anaklia port is in Georgia’s interests in both transit and economic ways. In addition, argument that NATO is not well represented in the Black Sea area is groundless, because among NATO member states, three are from the Black Sea basin and NATO has carried out various military initiatives and joint exercises in the region.

1. Russia bears responsibility for the annexation of Crimea and the opening of fire at the Ukrainian ships in the Kerch Strait.

Annexation of Crimea by the Russian Federation followed the “Euromaidan” events of February 2014 in Ukraine. It is noteworthy that the annexation of Crimea by Russia is a flagrant violation of the principles of international law, which was followed by sanctions from the US and the European Union against Russia. It is important to note that the ports on the Crimean Peninsula have a strategic importance for Russia.

Russia is the one responsible for both the Kerch strait incident and annexation of Crimea. In November 2018, Russian border guards opened fire and then detained three Ukrainian military ships and 24 sailors. Ukraine’s boats were moving from the Black Sea to the Azov Sea, all while respecting the principles of international law. In the Azov Sea, alongside Russian ports, there are Ukrainian ports as well, but Kerch strait was illegally closed by Russia. After the strait lock, Ukrainian boats decided to move back and the Russian border forces opened fire on them in the Black Sea and arrested them.

2. The escalation of the security environment in the Black Sea region has occurred after Russia’s annexation of Crimea

The Crimean Annexation and its subsequent militarization by Russia prompted NATO to respond. Following annexation of Crimea in 2014, a new challenge has been created in the region and NATO has been forced to react to the threat. It has been documented in details in NATO’s Readiness Action Plan enacted at the 2014 NATO Summit.

It should be noted that all three members of the Alliance (Turkey, Romania and Bulgaria) are located on the Black Sea coast. However, NATO initiatives consider involvement of member states as well as cooperation with the alliance partners such as Georgia and Ukraine.

3. NATO Military Representation in the Black Sea is carried out through alliance’s military initiatives and joint exercises format

Three NATO member states (Turkey, Romania, Bulgaria) are in the Black Sea basin, Georgia and Ukraine are partners of the Alliance and actively cooperate with the Individual Partnership Action Plan. Therefore, NATO is naturally represented in the Black Sea. The multinational brigade structure and logistical base was created in Romania, which was also placed under the headquarters of the multinational division, and will be engaged in permanent exercises by NATO, as well as the partner countries. In the scopes of Tailored Forward Presence (TFP) format, created on the Warsaw Summit, the US placed 500 military personnel. These initiatives include marine, air and land components.

In addition, NATO naval exercises are regularly conducted with the participation of the Alliance members and its partner countries in the International waters of Black Sea.

4. Anaklia Port is an important project for Georgia’s economic development and for the transit function of the country

The Anaklia Deep Sea Port aims to increase the freight turnover. It is an economic project and does not consider building a military base. Deepwater ports are of great importance in terms of Georgia’s transit function, as it allows the country to increase its transport, financial, industrial and tourism potential. In addition, Georgia is the only country in the Black Sea, which does not have a deep-water port, which significantly hinders the use of transit potential of the country.

It is noteworthy that the Russian and pro-Russian actors are actively trying to represent building deep-sea ports in Georgia as a threat for the country. The actualization of this topic began the same time as beginning of investigation against TBC Bank against NATO and military exercises in the Black Sea. The Port of Anaklia, which gives the possibility of transporting large quantities of cargo, is an alternative transit route that contradicts Russia’s economic influence and its interests.

You can see discussion about misinformation spread by Russian and pro-Russian actors about deep-sea ports in the previously prepared material by Myth Detector: