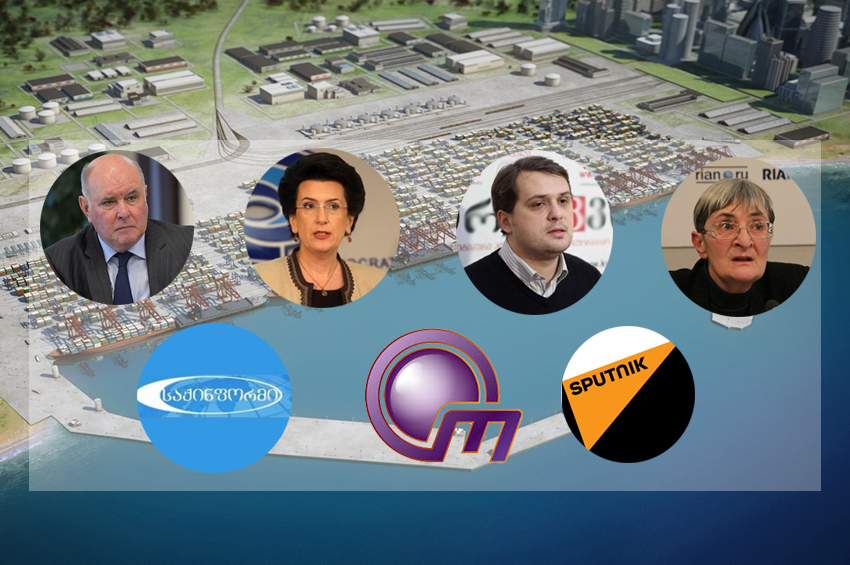 Over the past two months, pro-Russian actors have been continuously raising the issue of construction of deep sea ports in Georgia that may be linked to several issues.

Grigory Karasin: “They are talking about accelerating membership to NATO, so called “Russian threat to European democracy” and so on… It is clear that if NATO military activities intensify in the South Caucasus, sooner or later, it will cause problems. We all remember how Ukraine’s problems began and the situation will be the same now.”

In response to Karasin’s threats, Nino Burjanadze, leader of the pro-Russian Democratic Movement party said in the interview with Rustavi 2 TV on March 3 that the construction of the Anaklia deep sea port will be unacceptable for Russia, because the port will have the infrastructure necessary for the entry of American submarines.

Who frightens us and how with the deep sea port projects in Georgia?

Over the past two months, the issue of the Poti and Anaklia deep sea ports was most frequently raised by Arno Khidirbegishvili, chief editor of pro-Russian news agency Sakinformi. The issue was also covered by Obieqtivi TV for several times and besides the program host, Nino Ratishvili, the deep sea ports were denounced as “the U.S. project” and “a threat” by the guests of the program, among them Mamuka Areshidze, political analyst, Guram Nikolaishvili, Georgian retired general, and Nana Devdariani, head of the Global Research Center.

The following messages were voiced against the Anaklia and Poti deep sea ports:

Nino Burjanadze, Democratic Movement – United Georgia, February 28: “I do not think that Russia will demand it. There may be some talks about not using the Anaklia port by submarines and naval ships of the non-Black Sea states. That will be an absolutely fair and logical demand on their part.”

Nino Burjanadze: “The Sea near Anaklia is extremely deep and it enables the entry of submarines into the port in case of building appropriate infrastructure. Naturally, if Russia doubts that this port may be used for NATO or American submarines, it will be absolutely unacceptable for Russia and the country will not allow it.”

Asaval-Dasavali, March 4-10
Lado Sadgobelashvili: “The construction of Anaklia port will be equal to Georgia’s accession to NATO and Moscow will not allow it.”

Nino Ratishvili, Obieqtivi TV, February 26: “NATO – a threat or security and Anaklia – a threat of security, I wonder?”

Nana Devdariani, Global Research Center, February 26: “In order for NATO to use the Anaklia port, it should first have to reach it and it will never be allowed to reach it in the current situation. God save us from such open confrontation in the Black Sea. No matter whether Anaklia will be built or not, we will get punched in the neck.”

Arno Khidirbegishvili, Sakinformi, February 19: “The Black Sea security: why does Georgia need three deep sea ports if not for the U.S. and NATO navies?”

Arno Khidirbegishvili, Sakinformi, February 21: “As known, [former PM Giorgi] Kvirikashvili incorporated Khazaradze’s TBC Bank into the Georgian-American Consortium, which is building the Anaklia deep sea port, after completion of which it may become a regional hub for maritime transportation, the most expensive business facility in Georgia, which may be used by the United States as a naval base, including for its submarines.”

Mamuka Areshidze, expert, February 26, Obieqtivi TV: “The Anaklia port… is more important from political rather than economic point of view. A lot of things are quite obscure. First, a small country like Georgia does not need two large ports… Transformation of the Poti Port into a deep sea port is associated with large expenses.”

Arno Khidirbegishvili, Sakinformi, February 19: “Will there be three Black Sea deep sea ports in Georgia located some tens of kilometers away from each other? And what is most important – will the attracted freights be enough to ensure profitable operation of not one or two, but three deep sea ports? There is no clear answer to this question so far.”