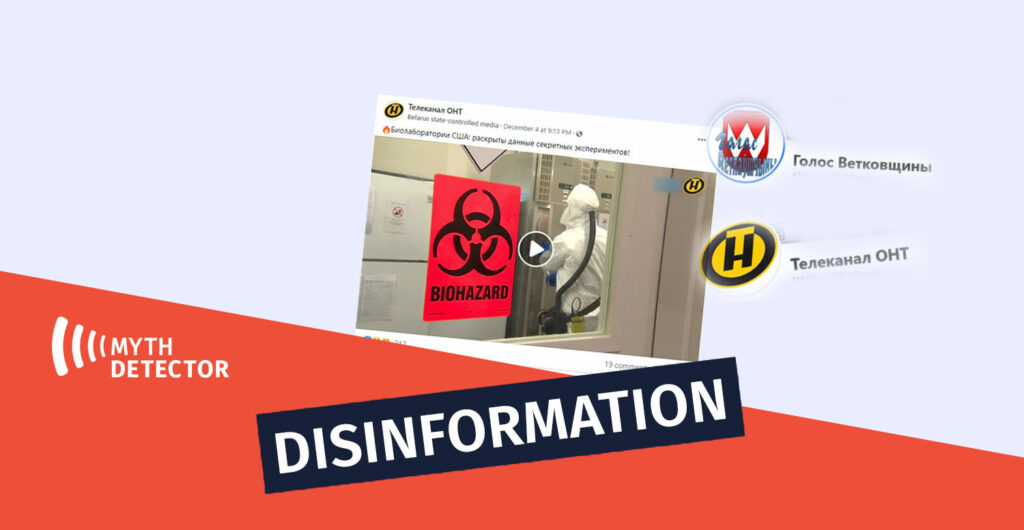 On December 4th, 2022, the Belarusian state-controlled propaganda channel ‘ONT’ published a story on Facebook, according to which bio-agents capable of selectively infecting Slavs were being developed in “American bio laboratories” on the territory of Ukraine. According to ONT, due to the high risk of accidents, most of the US laboratories are located in third-world countries, while in the post-Soviet space, they are absent only in Belarus and Russia. In addition, TV channel respondent Viktor Litovsky noted that American biological laboratories are located on the territory of US partner countries because such laboratories are prohibited in the United States. Additionally, the story alleges that Russian experts have arguments pointing to the involvement of the United States in the emergence of the coronavirus; for example, the story mentions the “creation” of a strain of coronavirus with an 80% lethality in such laboratories.

On December 5th, the ONT story was published on the Facebook page by another Belarusian media outlet “Голос Ветковщины” [Voice of Vetkovshchina]. 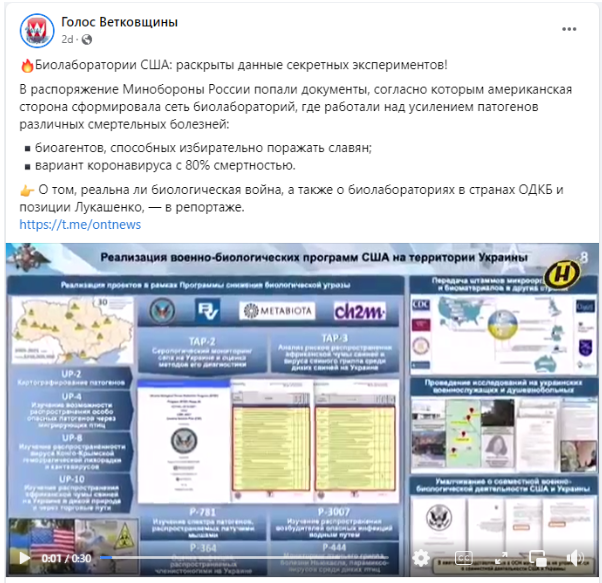 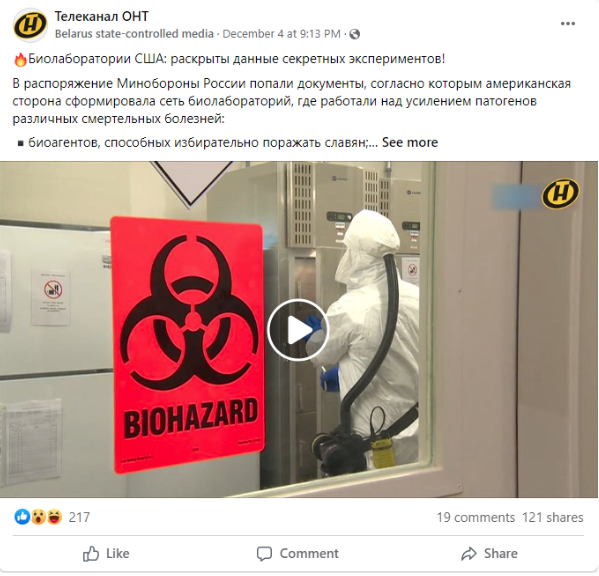 The story by ONT voices a number of false claims and conspiracies. 1. The claim about the development of bio-agents capable of selectively infecting the Slavs is disinformation and is part of a conspiracy theory. To date, the creation of this type of bioweapon is technically impossible. 2. The assertion that “American bio laboratories” are located on the territory of US partner countries due to the fact that such laboratories are prohibited in the United States itself is false. 3. The study that concerns the development of a strain of coronavirus with 80% lethality does not indicate any involvement of the United States in the spread of coronavirus.

Accusations about the alleged attempts to create bio agents capable of selectively hitting the Slavs on the territory of Ukraine in American bio laboratories were voiced by the Ministry of Defense of the Russian Federation since the beginning of the war. On March 10th, Lieutenant General Igor Kirillov, Chief of the Radiation, Chemical and Biological Defense Forces of the Armed Forces of the Russian Federation, made a corresponding statement at a press conference. The information about the existence of biological weapons that target specific ethnic groups is conspiratorial in nature. To date, there is no officially confirmed evidence that any state possesses such weapons. All scientific articles and studies that exist around this issue are theoretical and speak only on the basis of and assumptions of its existence. As various scientists explain, the creation of an ethnic bioweapon is technically impossible.

Soon after the statements of the Ministry of Defense, on March 11th, several scientists across the globe denied the accusations voiced by the Russian Federation. Professor Oliver Jones, Head of Biosciences and Food Technology at RMIT University in Melbourne, Australia, said the allegations were science fiction. According to Jones, people are too genetically similar to find agents that would only work on some people and not others.

Oliver Jones: “Modern DNA testing can, at best, only tell you if you ancestry is likely to have come from a specific regions such as Europe or Sub-Saharan Africa not specific countries. You can’t tell which country someone is from let alone their possible ethnicity from DNA so there is no way to make any sort of agent, biological or otherwise, that could affect one ethnic groups and not others. It is just not going to happen.”

The same opinion was expressed by Dr. Richard Parsons, Senior Lecturer in Biochemical Toxicology at King’s College London. According to Parsons, it is very unlikely that weapons aimed at specific ethnic groups could be developed.

Richard Parsons: It is highly unlikely that a weapon that targets certain ethnic groups could be developed. We do have pharmaceutical agents which are more effective in certain ethnic groups due to very small differences in their shape, but these are highly-designed and complex molecules which take years to develop, and even members of the same ethnic group don’t all share these differences.”

Parsons also noted that in the case of Europe, Europeans, no matter where they are on the continent, have much more in common genetically than with other ethnic groups around the world. Thus, differences between ethnic groups in both Eastern and Western Europe are not sufficient to cover specific population groups.

In theory, creating weapons to target specific ethnic groups requires that the weapon be targeted at a group of people with common genetic characteristics that other people would not have. It will be impossible to obtain such material if we take, for example, the territory of modern Russia, because due to the mixed genetic history in a particular geographical area, specific markers practically no longer exist. In practice, the creation of such a weapon will be possible only if its target is a group of people who have been in complete isolation for centuries. Otherwise, a virus designed for such a purpose could kill 20% of the target population, while the same disease could potentially kill 28% of other populations.

Allegations of the creation of biological weapons capable of hitting specific ethnic groups are part of a conspiracy theory amplified by the Kremlin, which periodically appears in the Russian media. For example, in May 2007, the Russian newspaper Kommersant published an article according to which the Russian authorities banned the export of biomaterial from the country, and the reason for this was the fact that the West intended to manufacture biological weapons against Russia. In addition, on October 30th, 2017, Russian President Vladimir Putin announced that foreigners throughout Russia were collecting biological materials of various ethnic groups, all done at the highest level and for hidden reasons, and the next day, Kremlin spokesman Dmitry Peskov attributed such actions to foreign embassies and non-governmental organizations. Other high-ranking officials of the Russian government also joined in the efforts to bolster the conspiracy theory. Putin’s announcement was preceded by a “discovery” made by Russia Today in July of that year. According to RT, the US Air Force collected RNA and intracellular fluid samples from Russians for unknown reasons. In fact, according to US Air Force Speaker Bo Downey, a two-stage study of the musculoskeletal system was carried out; in the first case, the material for the study was purchased from one of the American companies. As it turned out, the material contained samples taken in Russia, and for the accuracy of the study, it was necessary to take the rest of the material from the same area.

First, it should be noted that laboratories used to carry out studies on various pathogens that cause diseases are classified by different levels of biological safety. The classification depends on how dangerous pathogens are stored in a particular laboratory. To work with hazardous pathogens, laboratories must comply with the relevant standard. The lowest biosafety level is 1 (BSL-1), and the highest is 4 (BSL-4).

Consequently, the US has a base for working with risk group 4 pathogens, while the US partner countries in the post-Soviet space do not. Therefore, the claim the United States transfers “dangerous” bio laboratories to the territory of third countries is false.

The claim that the Boston University lab has “created” a deadly new strain of the virus with “80% lethality” is linked to an article by the British tabloid Daily Mail. However, as CBS Boston points out, this report is inaccurate and misrepresents the work done by the lab. The study was aimed at comparing different strains of the virus, rather than creating a “dangerous new variant of COVID-19.

Researchers at Boston University’s National Emerging Infectious Diseases Laboratory have been studying the coronavirus, its treatment, prevention, and transmission since 2020. Their 2022 study aimed to determine why the Omicron variant of COVID-19 causes less severe symptoms compared to the original strain, and also to find out which component of the virus determines the severity of symptoms. To do this, the researchers compared the original strain of COVID-19, the Omicron variant, and their combination. It was this latest version that led to the misleading claims about the development of a “new strain” of COVID. During the study, all of these strains were injected into mice to determine how deadly each version of the virus is – with the original strain, 100% of the mice died; none of the mice died with Omicron, and about 80% of the mice died with the hybrid strain.

It is important to note that research simulations using animals cannot be directly compared to human biological processes. The mice used in the study were “exceptionally susceptible” to the coronavirus, and were given much larger amounts of the virus than humans would typically encounter. Consequently, the mortality rates were much higher compared to the human mortality from the original coronavirus, which is about 1%. For more information on the matter, see the article by “Myth Detector:”

Since the start of Russia’s full-scale invasion of Ukraine, the Kremlin and Kremlin propaganda media have been actively spreading disinformation about so-called dangerous research carried out in Ukrainian laboratories and about US-Ukrainian cooperation in the field of biosecurity. Myth Detector has repeatedly debunked these false claims: