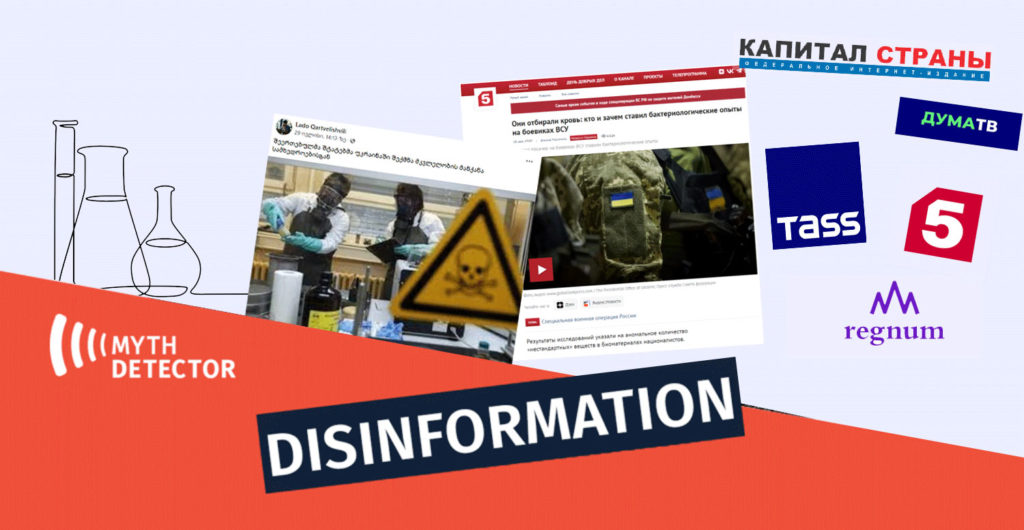 On 18 July, Deputy Chairman of Russia’s Federation Council Konstantin Kosachev and Deputy Chairman of Russia’s State Duma Irina Yarovaya talked about the results of inquiry into US laboratories operating in Ukraine. The Ukrainian labs are investigated by the parliamentary commission co-chaired by Kosachev and Yarovaya. According to them, the USA conducted “secret experiments” on Ukrainian military servicemen, which could be applied for military purposes in specific situations. Yarovaya declared that Ukrainian servicemen caught various diseases that were atypical for the Ukrainian territory. Blood tests of servicemen showed “a very high titer of hepatitis A” and “West Nile Virus” and even traces of narcotic substances. As a result of all that, the servicemen “turned into the most brutal and deadly monsters,” claimed the Russian MPs. This information was disseminated in the Russian-language media 1, 2, 3, 4 and Georgian-language Facebook group ანტილაბ-საქართველო [Anti-Lab Georgia].

“What we are witnessing now, that form of brutality and mercilessness in the behavior of Ukrainian servicemen; those crimes they commit against civilians and those horrible crimes they commit against servicemen, proves that there is an entire system of creating and running a terrible machine of death, which has been implemented under the leadership of the United States. … It has also been confirmed that these servicemen are doped to date in order to fully erase any trace of human consciousness and turn them into ruthless monsters,” said Irina Yarovaia. 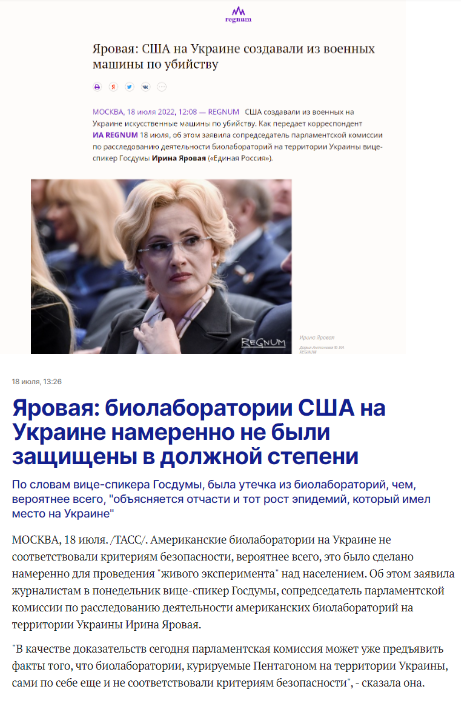 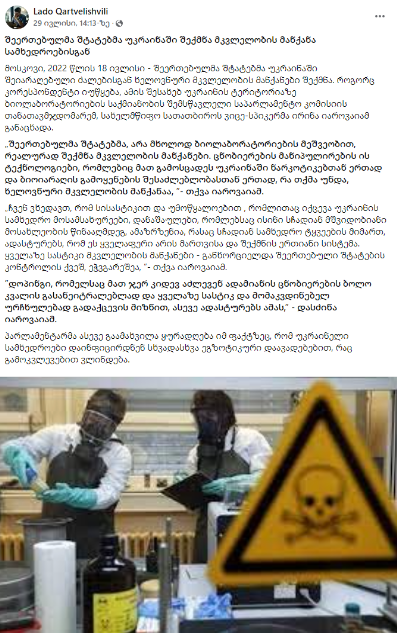 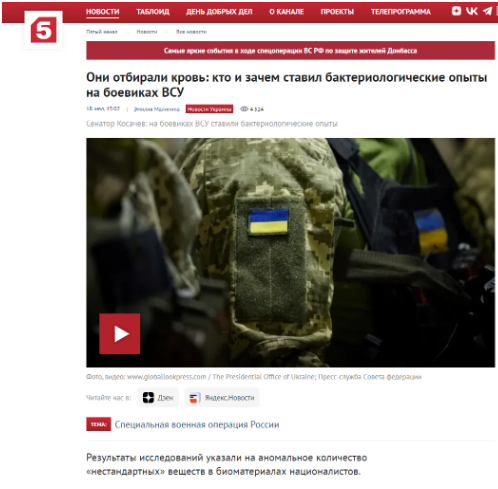 The statement of Russian MPs that Ukrainian servicemen are subjected to dangerous experiments does not rely on factual evidence. For years, the pro-Kremlin media have been disseminating allegations about dangerous experiments conducted in Ukraine. The truth is that the USA has assisted Ukrainian laboratories in technical enhancement since 2005. Furthermore, according to a genetic scientist Kirill Volkov, diseases detected among Ukrainian servicemen are not atypical and they can be found in Southern parts of Russia too.

The allegation about the existence of Pentagon-led labs in Ukraine has been disseminated by pro-Kremlin media and various actors for many years now. According to Russian narrative, in military labs operating in the vicinity of Russia’s borders, Americans create pathogens and deadly diseases and then test them on population of post-Soviet countries. Shortly after the outbreak of Covid-19 pandemic, in May 2020, the Security Service of Ukraine issued a special statement to respond to false information about “American laboratories,” which was spread in social networks in a coordinated manner. The statement said that no foreign biological laboratories operate in Ukraine, even more so of military nature.

The U.S. Department of Defense has been cooperating with the Ukrainian government in technical enhancement of public health laboratories since 2005, but this program does not imply biological projects of military nature or the conduct of tests on servicemen.

Disinformation of similar nature was spread earlier too, in which it was alleged that dangerous experiments aimed at spreading infectious diseases were conducted on patients of mental hospital in Kharkov. See, the full story about this disinformation:

Kosachev and Yarovaia claimed that the trace of narcotic substances was detected in blood of servicemen. They also added that servicemen caught atypical diseases. In an interview on this issue to kommersant, PhD in Biology and specialist of genetics Kirill Volkov said that diseases detected among Ukrainian servicemen “are not considered atypical for Ukraine.” According to him, currently, a general trend of spread of subtropical diseases prevails and cases of West Nile Virus have been detected in Southern regions of Russia and could be found in Ukraine too. As Volkov said, Hepatitis A is a typical disease. According to him, substances that can alter human consciousness and cause aggression in people do exist, however, in his assessment, the statements of Russian MPs about “biological attacks” are an exaggeration.

Myth Detector has repeatedly exposed disinformation of similar type about Labs in Ukraine. See the fact-checked materials in full: