Did a Boston Lab really create a dangerous strain of COVID-19? 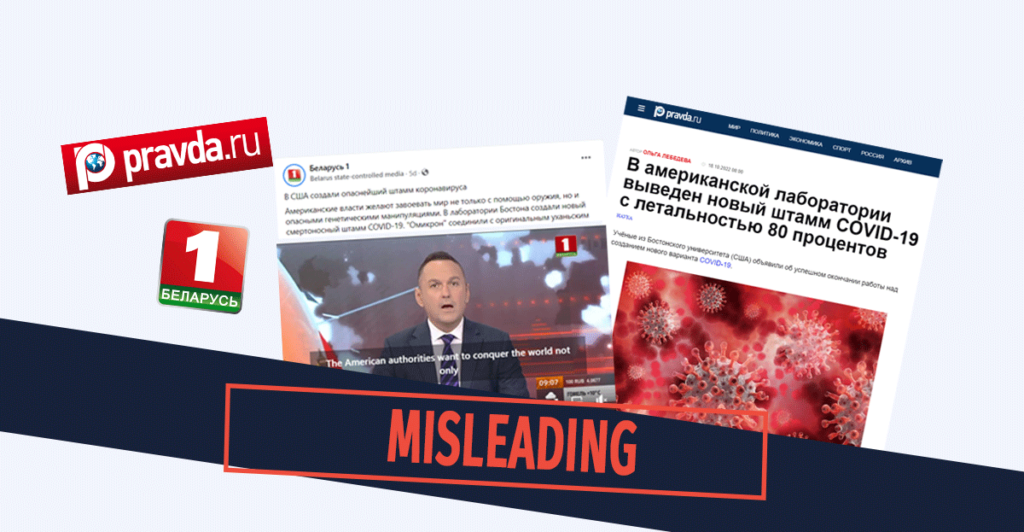 On 18 October 2022, the Facebook page of Belarus 1 (Беларусь 1) — a state-owned television channel in Belarus — posted a clip from their news broadcast, claiming a new deadly COVID-19 strain has been created in a Boston lab. The video appears in two posts (1, 2), both of which claim the U.S. has created the most dangerous strain of Coronavirus in order to conquer the world using genetic manipulations. According to the video, the man-made virus reached an 80% lethality in mice, and is five times more contagious than the “Omicron” variant for human cells.

A similar claim was published in an article on Pravda.Ru on 18 October 2022, which was also shared on Pravda’s Facebook page. 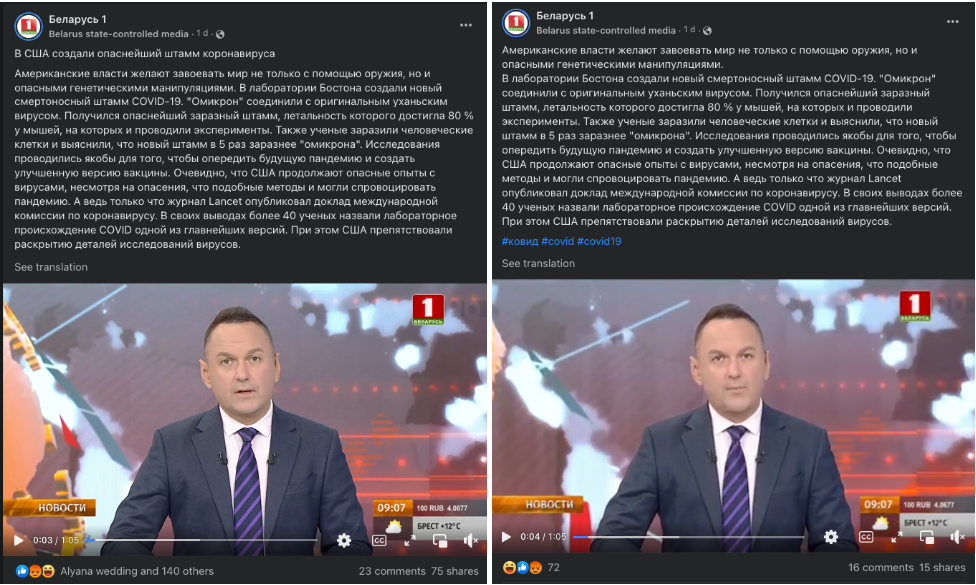 The TV broadcast features misleading information on Boston Lab study and both the presenter and the Facebook posts exaggerate specific claims to promote COVID-19 conspiracy theories. The aim of the study was to establish which component of the virus determined the severity of the disease and why Omicron caused less severe disease than the original strain of COVID-19. For this matter, researchers compared the original strain of COVID-19, Omicron, and a combined version of the two. Furthermore, the research done on mice does not correlate to what would occur in humans.

The claim that a Boston University laboratory “created” a deadly new strain of the virus with an “80% kill rate” originates in an article by the British tabloid the Daily Mail, which was then picked up by a number of U.S. outlets and spread on social media. However, as outlined by CBS Boston, these reports are inaccurate, misrepresenting the work done at the lab.

Researchers at Boston University’s National Emerging Infectious Diseases Laboratories (NEIDL) have been researching Coronavirus since 2020, looking at treatment, prevention, and transmission. Their 2022 study aimed to determine why the Omicron variant of COVID-19 appears to cause less severe symptoms compared to the original strain, and to figure out what component of the virus determines its severity. In order to do so, the researchers compared the original strain of COVID-19, the Omicron variant, and a version of the two combined. This last version is what led to misleading claims about a “new strain” being developed. These strains were all then injected into mice to determine how deadly each version of the virus is — with the original strain, 100% of mice died; with Omicron, none of the mice died, and with the hybrid strain, around 80% of the mice died.

It is important to note that modeling using animals does not directly translate to what happens in humans. The mice used in the test were created to be “exquisitely sensitive” to Coronavirus, and they were given a much higher amount of the virus than what a person would typically encounter. Hence, the mortality rates were much higher compared to the human mortality from the original Coronavirus variant, which is about 1%.

The video of Belarus 1 also cites a report in The Lancet, claiming that more than 40 scientists named a laboratory origin of the COVID-19 virus. The post ends by claiming the U.S. prevented a disclosure of details regarding the virus research. The peer-reviewed medical journal did publish a report on 14 September 2022 in which it discussed the origins of the Coronavirus. In the report, the authors made it clear that all three research-associated hypotheses — infection in the field, infection with a natural virus in the laboratory, and infection with a manipulated virus in the laboratory — are still plausible. They also stated that “Independent researchers have not yet investigated the US laboratories engaged in the laboratory manipulation of SARS-CoV-like viruses, nor have they investigated the details of the laboratory research that had been underway in Wuhan,” further stating that “the US National Institutes of Health (NIH) has resisted disclosing details of the research on SARS-CoV-related viruses that it had been supporting, providing extensively redacted information only as required by Freedom of Information Act lawsuits.”

However, it is important to note, as the Washington Post details, that the Chairman of the panel producing the report has publicly embraced the “lab-leak theory,” provoking a year-long fight with other commission members who say there is far more evidence that the virus has a “natural origin” and that it was first transmitted to humans from an animal. In addition, the Lancet report omits mention of recently published papers arguing the pandemic began in a Chinese market, not a laboratory. An additional report published 10 October 2022 also recognizes that the COVID-19 virus likely spread naturally via a zoonotic jump from an animal to humans, citing past occurrences such as the SARS outbreak, which emerged in 2003 within the live wildlife markets of Guangdong, China.