On September 18-19th, 2022, Russian-language Facebook accounts (1,2,3,4,5,6,7,8,9,10,11,12) have been disseminating information about the post published on the Telegram channel of Andrii Yermak, adviser to the administration of the President of Ukraine. According to the claims, Ukraine announced to the world that mass graves of Ukrainians tortured and killed by the Russians were found in Izium, although, in fact, the photos of graves attached to the Telegram post of Yermak show March 9th as their date of death. Russian-speaking Facebook accounts argue that the Russian forces established control over the city on April 1st, which raises questions about whether the Ukrainians have been burying the dead in this place even before the arrival of the Russian forces?” Then who tortured them to death? Maybe Ukrainians themselves?”

On September 19th, an almost identical statement was published on the Facebook page of the Russian Embassy in the Republic of South Africa. The statement referred to reports of the tombs found in Izium as a propaganda campaign joined by the Western media and another provocation after the “bloody stagings” of Bucha, Irpin and Kramatorsk. The embassy addressed Yermak with the following question: “So, who in reality executed these people, Mr Yermak, weren’t it Ukrainian Nazis?”

The information about the mass graves found in Izium is disseminated manipulatively. In fact, the photos published by Andrii Yermak do not prove the innocence of the Russian soldiers. These specific graves mark the burial site of the Stolpakov family, who were killed in an air and artillery attack on a multi-story building by the Russian military on March 9th. Yermak does not claim that members of this family were victims of torture, nor do other senior Ukrainian officials claim that all the bodies found in the mass grave bear signs of torture.

On September 17th, the adviser of the administration of the President of Ukraine, Andrii Yermak, published photos of the grave found in Izium with the following description: “The Russians are killing Ukrainian families completely. Izium, Olesya, 6 years old. Killed by terrorists in Russian uniforms. Her parents are buried nearby.” 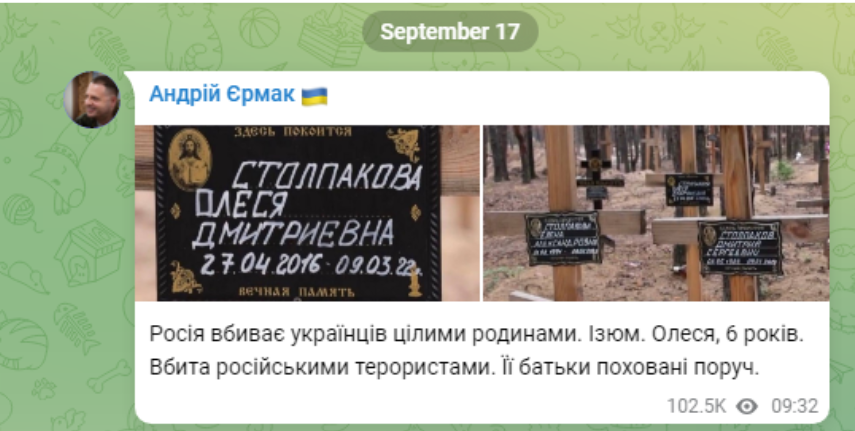 The photos included in the post indeed show March 9th, 2022, but this does not mean that the Russian side has nothing to do with the death of the people buried on the spot.

In his post, Yermak does not specify how 6-year-old Olesya and her parents died and does not claim that they were victims of torture.

From the beginning of March 2022 to April 1st, that is, until the date when the Russian military occupied the city, Izium was actively bombarded, and information about numerous cases of civilian deaths was also reported by the media.

According to Ukrainian and international media, on March 3rd, an aerial attack of Russian forces on a multi-storey building and a house killed eight civilians, including 2 children. Since March 4th, the supply of natural gas, water and electricity to the residents of the city has been stopped.

Artillery attacks and air attacks of the Russian army on the city continued actively in the following days. On March 7th, Izium officials announced that the city centre was practically destroyed.

After the discovery of the graves of 5-year-old Olesya Stolpakova and her parents in the common cemetery of Izium, more details about their deaths became known. On March 9th, a part of the multi-storey building collapsed as a result of the air and artillery attack carried out by the Russian military forces. Olesya, her parents and older sister, as well as grandparents, whose graves were also discovered, were in the building at the time. All six of them fell into the rubble and died on the spot.

Associated Press News also fact-checked the information about the incident. The agency contacted the victims of the accident and members of the city administration, who confirmed the authenticity of the mentioned event.

The fact that the members of the mentioned family were not victims of torture does not prove that the Ukrainian side’s information about the crimes committed by the Russian military in Izium is false. Ukrainian officials do not claim that all the bodies found in the mass grave have signs of torture. On September 16th, the President of Ukraine, Volodymyr Zelenskyy, said that some of the bodies showed signs of torture.

Sergei Bolvinov, the head of the main division of the National Police of the Kharkiv region, said in an interview with Sky News that some of the 440 bodies found were shot and killed, while others died from artillery fire, aerial bombardment, or injuries received from the explosion of mines. According to Bolvinov, it is still not possible to identify many bodies, and the causes of death will be determined more precisely by the investigation.

The post by the Russian embassy also contains a false claim about the massacre in Bucha being staged. “Myth Detector” has verified this disinformation in the past. For details, see our articles: