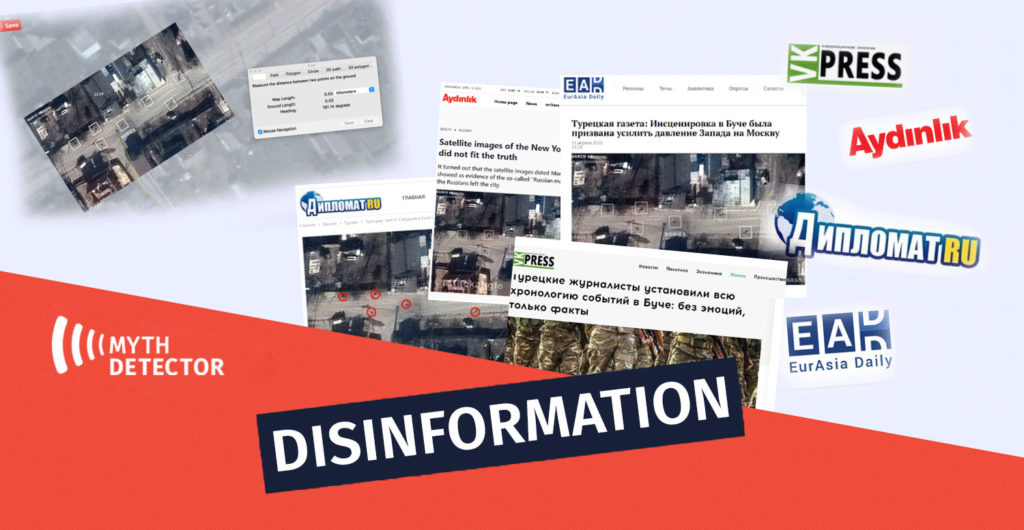 The article by Aydinlik contains a number of false claims. In fact, 1) Footage of corpses in the streets of Bucha was published by the BBC and the National Police of Ukraine not on April 3rd, but on April 2nd, as soon as Ukrainian forces entered Bucha; 2) In addition to the New York Times, the existence of corpses in Bucha during the time it was under Russian control using satellite images from Maxar Technologies and Planet was also confirmed by the British Ministry of Defense and Reuters; 3) Based on drone footage from the outlet “Meduza,” the investigative team “Bellingcat” confirmed the presence of corpses in the streets of Bucha on March 23-30th; 4) The inclination of the shadows reflected in the satellite photo exactly matches the March 19th data.

Aydinlik questions the credibility of satellite photos of Maxar Technologies published by the New York Times on April 4th and concludes that the specific photo, which shows corpses scattered on Yablonska Street, was actually taken on April 1st – two days after the Russian troops left the city. Aydinlik asserts that there were no corpses on the streets before that. In fact, in addition to the New York Times, other outlets and government agencies have conducted independent investigations using satellite imagery and drone footage.

For instance, according to a statement from the British Ministry of Defense on April 5th, satellite photos taken on Yablonska Street in Bucha on March 21st confirm the presence of at least 8 corpses in the area. 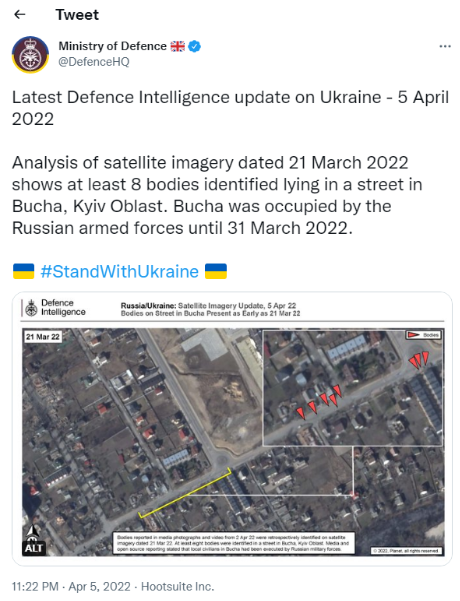 It is noteworthy that in this case, the British Ministry of Defense relies not on the New York Times and Maxar Technologies, but on its own, independent analysis of satellite photos taken from the company Planet. The location of the photo in the statement of the Ministry of Defense, in turn, coincides with the location of the photos published by the New York Times and reflects Yablonska Street in Bucha.

Notably, more than 200 satellites of the company Planet cover the terrestrial area of the planet daily. 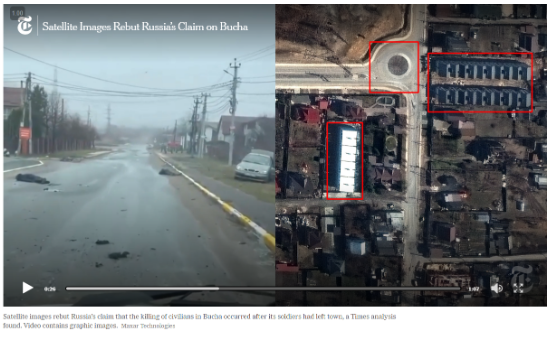 Through an independent investigation using satellite images taken by Maxar Technologies on March 19th, Reuters researchers also concluded that there were corpses on the street from the time the area was controlled by the Russian side. 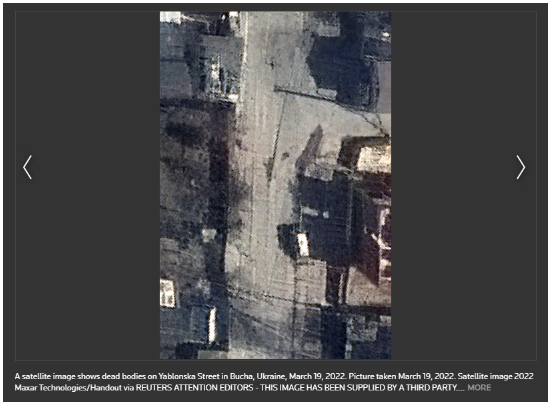 In addition, on April 3rd, Українська правда posted a video taken at the intersection of Yablonska and Vokzalna streets in Bucha. According to the publication, the video was shot by the Azov Battalion aerial reconnaissance on March 3rd, 2022, when the city was controlled by Russian troops.

The video shows Russian military equipment opening fire on a citizen cycling down the street. According to Українська правда, the authenticity of the video, the place and time of its shooting were confirmed by analysts at VoxCheck, a Ukrainian fact-checking platform. 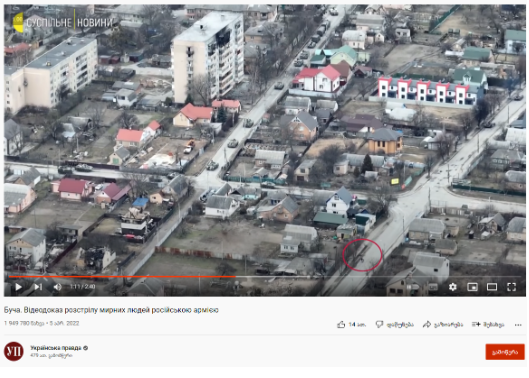 Researchers of the New York Times also managed to verify the video taken by the drone. 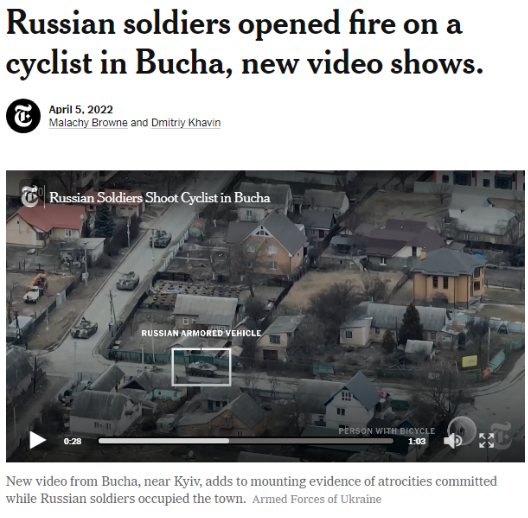 On April 8th, several more videos taken by the Russian-language outlet Meduza were published. According to the description, the videos were taken during March 23-30th, when the territory was controlled by the Russian military. The footage shows corpses scattered on the street. 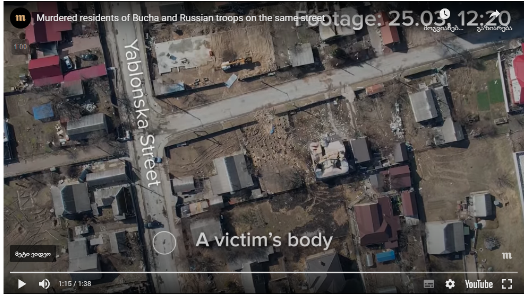 The footage taken on March 23rd also shows the corpse of the cyclist killed by the Russians. 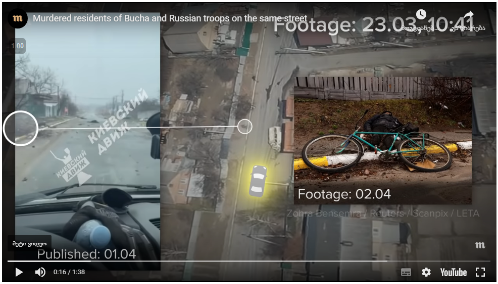 According to the International Investigative Group of Journalists Bellingcat, the dates of these recordings can be confirmed independently, as one of the recordings taken on March 21st shows the body and the house unharmed, and the March 27th satellite and drone footage shows that the building has been destroyed. 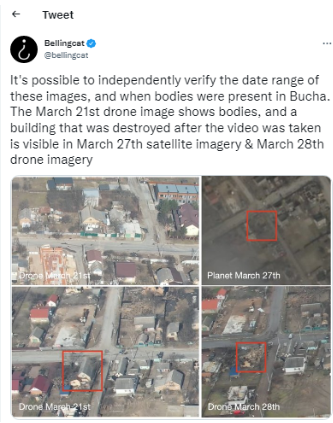 According to the Turkish media outlet, Western media outlets and the Ukrainian side started talking about the existence of corpses in Bucha and publishing photos only on April 3rd. In fact, journalists joined the Ukrainian military in the liberated Bucha on April 2nd, and it was then that the footage of the corpses taken in the streets of Bucha began to be disseminated. For example, on April 2nd, the BBC produced the first story on the situation on the streets Bucha after the departure of the Russian military. The corpses are clearly visible in the footage. More specifically, the story also depicts the corpses of people killed on Yablonska Street. Notably, the Turkish outlet questions the credibility of a satellite photo taken on this very street. 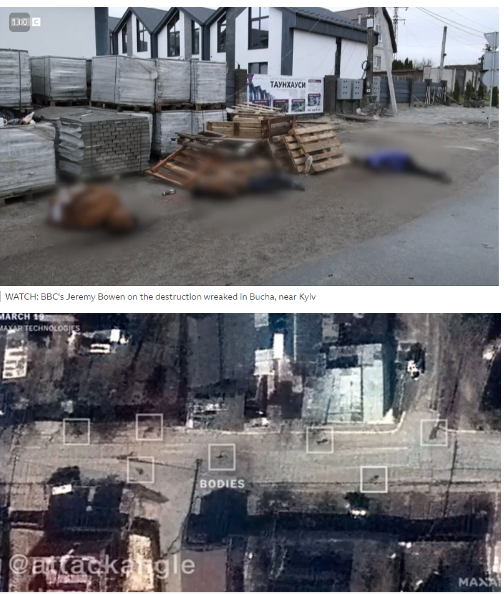 The bodies can also be seen in the video of the Ukrainian National Police. 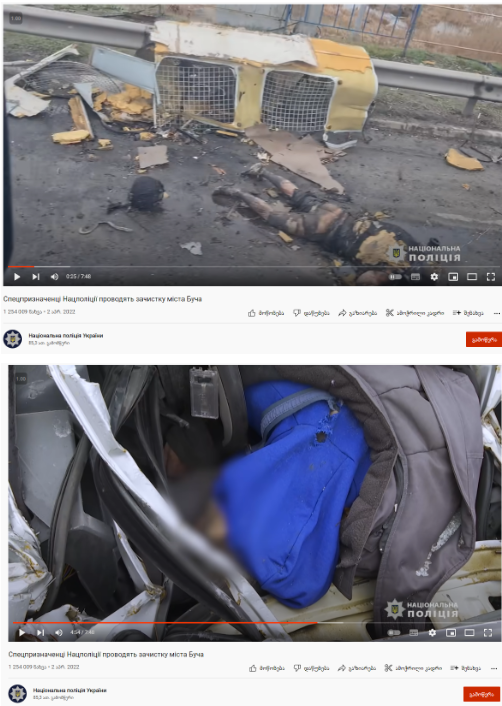 Disinformation about footage of corpses scattered on Yablonska Street, as well as a video released by the Ukrainian National Police, has been disseminated in the past as well. For more, see the articles of “Myth Detector:”

The Turkish-language outlet used the inclination of shadows as another argument to argue that the photo was actually taken on April 1st because the angle of inclination coincided with that day. In fact, the research organization “Center for Information Resilience” placed a photo taken by the in the New York Times on Google Earth to determine the inclination of the shadows. 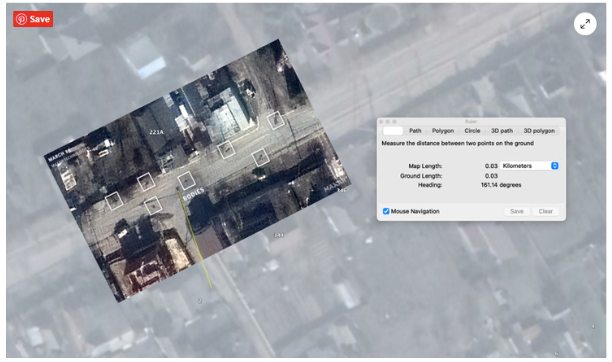 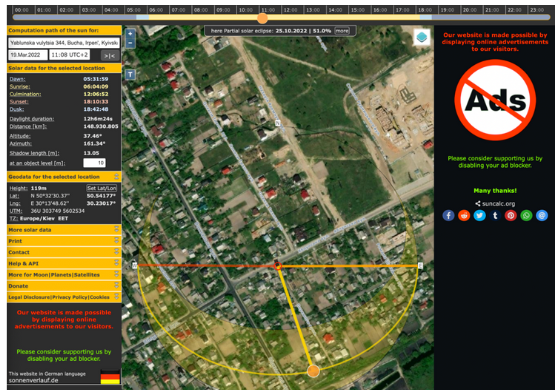 The online outlet “Aydinlik” belongs to the Turkish Patriotic Party (Vatan Partisi). The party has a Eurasian ideology and is therefore pro-Russian, pro-Chinese and anti-US. The party is calling for Turkey’s withdrawal from NATO and opposes Turkey’s candidacy for EU membership.

In 2009, Aydinlik was banned for 1 month on charges of propaganda of terrorism by the Istanbul court. In 2011, the editor-in-chief of the outlet, Mehmet Sabuncu, was arrested during an investigation into an alleged criminal network known as Ergenekon. Ergenekon members were accused of plotting a coup. Sabuncu returned to the position of Editor-in-Chief in 2014.

The outlet has published a number of pro-Russian content since the emergence of the Russia-Ukraine war.

The Kremlin propaganda has been using the Whataboutism technique for years, which involves making the opposite accusations or shifting the focus to another issue instead of answering accusations or difficult questions. The technique of Whataboutism tries to divert attention from the object of criticism and/or justify the object through incorrect comparisons and manipulative moral reasoning. The Kremlin has tried to refute the evidence using Whataboutism and to question the existence of victims on various occasions during the Russia-Ukraine War of 2022. For more, see the articles of “Myth Detector:”