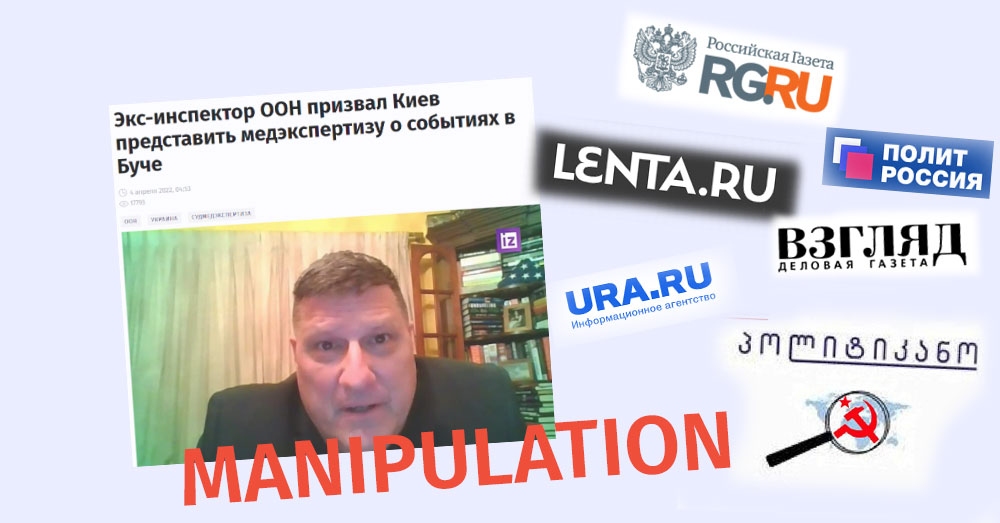 After the liberation of the Kyiv region, on April 3rd, the Ministry of Defense of Ukraine published a video of the civilian corpses found in the streets of Bucha. Russia’s Defense Ministry has denied all allegations of civilian casualties, saying all photos and videos were provocative and “staged by the Kyiv regime for the Western media.” The Kremlin’s version of the story was also shared by former United Nations Weapons Inspector Scott Ritter, who has often relied on Kremlin propaganda during Russia’s intervention in Ukraine. Ritter spoke to Russian media, stating that the Ukrainian side has been spreading unreliable information since the beginning of the Russian “special operation”, so in this case too, a proper investigation is needed to confirm the validity of the footage and determine the actual time and cause of death of civilians.

Scott Ritter also spoke to “Известия” about the footage, arguing that from the start of the “Russian special operation,” the Ukrainian government was not a reliable source because it often spread “unreliable information.” Ritter called on the public to be sceptical of the information provided by the Kyiv authorities and asked for an expert examination to determine the time of death, the cause of death and whether the bodies were moved from the original place of death. 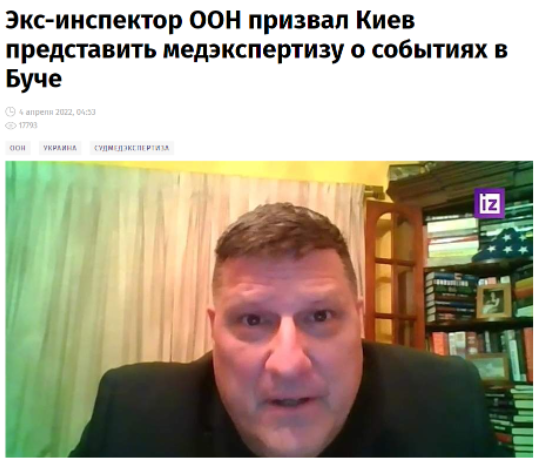 Ritter’s claim that the Ukrainian authorities’ blame for Russia for the Bucha tragedy is unreliable because Kyiv has been spreading disinformation since the start of the war is manipulative. In fact, the international human rights organization Human Rights Watch (HRW) has documented and described a number of war crimes committed by Russian forces against civilians in these areas. The European Union (EU) has also stressed the responsibility of Russia for war crimes in the liberated territories of Ukraine.

On April 3rd, Human Rights Watch responded to the atrocities committed by the Russian military with a report entitled “Ukraine: Apparent War Crimes in Russia-Controlled Areas.” 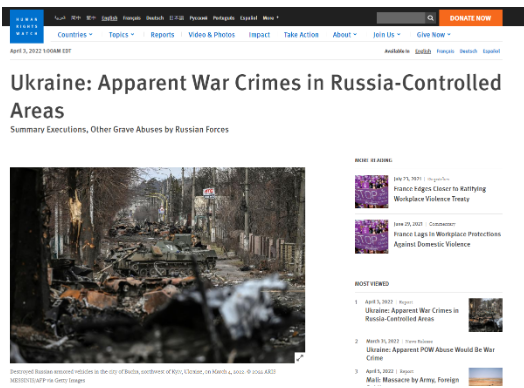 The report states that in the Chernihiv, Kharkiv and Kyiv regions, HRW recorded several war crimes committed by Russian forces against civilians in Ukraine between February 27th and March 14th 2022, including rapes and executions. Hugh Williamson, HRW’s Director for Europe and Central Asia, said the cases described by the organization were deliberate brutality and violence against Ukrainian civilians. The report describes several crimes committed by the Russian army against Ukrainian civilians, including one in Bucha, when, according to an eyewitness, Russian soldiers arrested five men, demanded that they kneel and shot one in the head.

The European Union has also condemned the war crimes committed by Russia in the recently liberated regions of Ukraine. 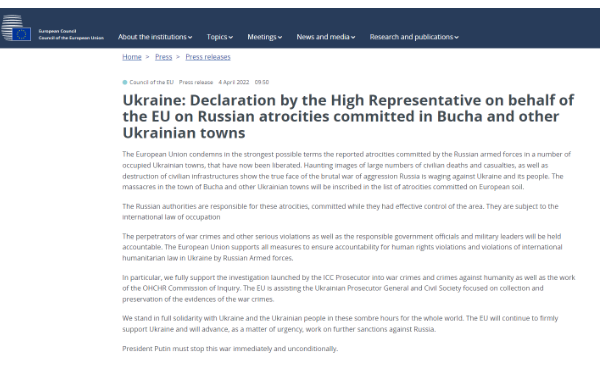 The statement issued by the EU reads as follows:

The EU: “The European Union condemns in the strongest possible terms the reported atrocities committed by the Russian armed forces in a number of occupied Ukrainian towns, that have now been liberated. Haunting images of large numbers of civilian deaths and casualties, as well as destruction of civilian infrastructures show the true face of the brutal war of aggression Russia is waging against Ukraine and its people. The massacres in the town of Bucha and other Ukrainian towns will be inscribed in the list of atrocities committed on European soil.”

The European Union (EU) directly blamed Russian authorities for the massacre in Bucha and other Ukrainian cities.

Notably, the footage taken by a New York Times satellite shows that the corpses of civilians in Bucha had been there for more than three weeks, that is, from the period when the city was still under Russian military control. Read more about “Myth Detector” material:

Who is Scott Ritter?

Scott Ritter is among the foreign experts the Kremlin’s propaganda has been actively relying on since the beginning of Russia’s intervention in Ukraine. Ritter often appears on Russian government channels (Channel 1) and various Facebook pages, his comments being shared by Russian embassies in multiple countries. 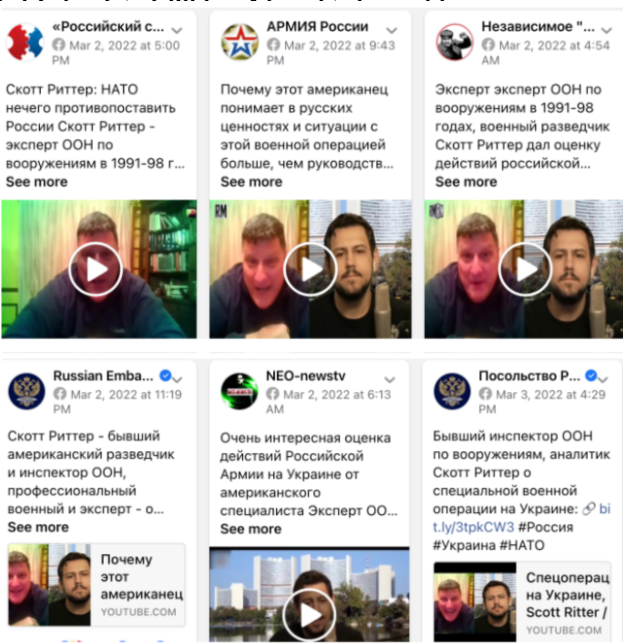 Scott Ritter was the United Nations Weapons Inspector from 1991 to 1998. After resigning, he became an active critic of the US government. 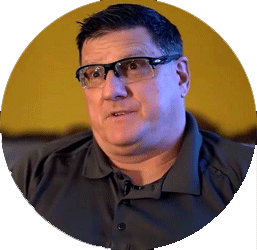