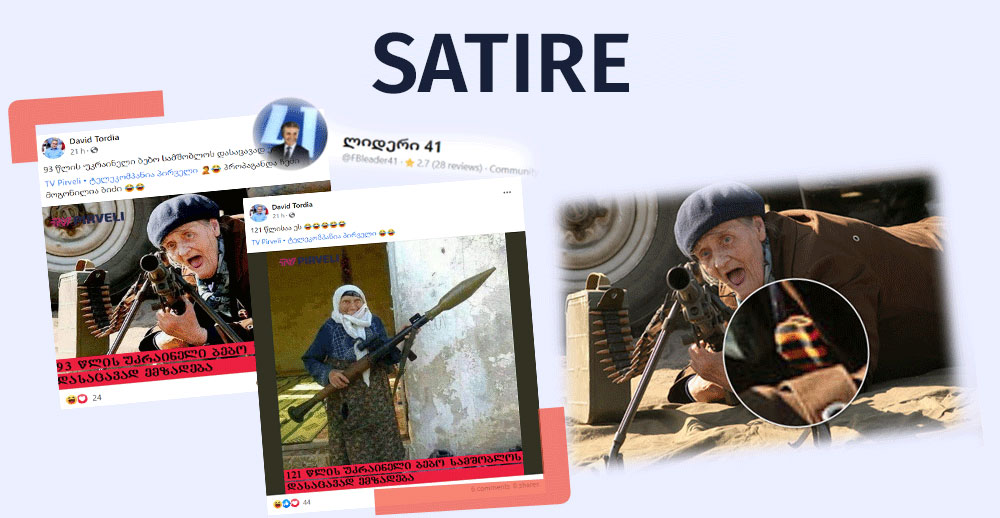 Amid the Ukrainian crisis, information about the participation of elderly people in the ongoing civil exercises in Ukraine has been somewhat viral on social media. Several media outlets, including the “Mtavari Arkhi”, “Formula,” and “Mega TV”, wrote about 79-year-old Valentina Konstantinovska. A post about Ukrainian women being at the front was also posted on the Facebook page of “TV Pirveli” on February 15th.

On February 16th, Davit Tordia, a supporter of the Georgian Dream and the administrator of the Facebook page “Leader 41”, published two posts on his personal Facebook page. In the posts, elderly women are depicted with guns in their hands. According to the inscriptions, 121 and 93-year-old “Ukrainian grandmothers” are preparing to defend their homeland. The logo of “TV Pirveli” is attached to both photos. Tordia marked the first page of TV Pirveli in the description of the posts, and in the description of one of the posts, he wrote: “Propaganda is my fictional uncle.” 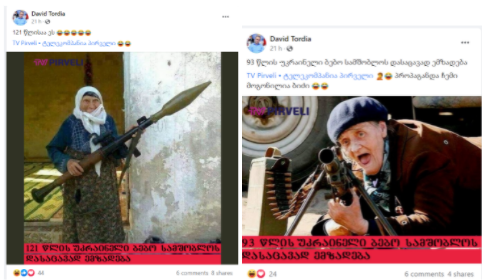 The posts published by David Tordia are satirical. In fact, one of the photos used in the posts has been circulating since 2008 and depicts a grandmother with the Ribbon of St. George, while the other has been circulating since 2014 with various descriptions. The supporter of the “Georgian Dream” published the photos with a satirical description to discredit “TV Pirveli’s” posts supporting Ukraine.

The photo, which, according to Tordia, allegedly depicts a “93-year-old Ukrainian grandmother”, has been circulating on the internet since 2008.

According to the website englishrussia.com, along with other photos, the picture of an elderly woman was uploaded from Russia. 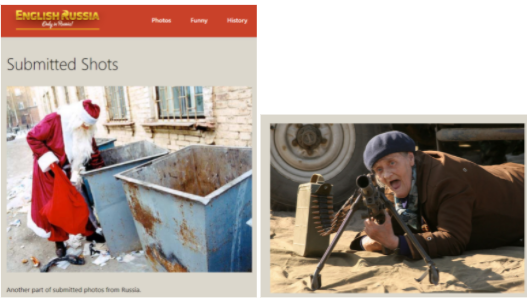 The high-resolution version of the photo shows the woman wearing St. George’s ribbon, which is used as a symbol of the victory of Russia in World War II. In addition, the ribbon represents one of the symbols of the Russian hybrid war in the post-Soviet space. 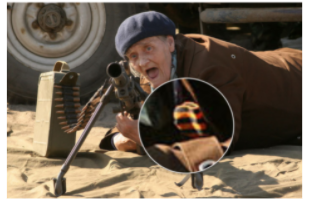 Notably, the use of the Ribbon of St. George has been banned in Ukraine since 2017. For many Ukrainians, the ribbon is a symbol of Russian aggression since, after the annexation of Crimea in 2014, pro-Russian activists have been using this same ribbon.

As for the second photo, it has been circulating on the internet since 2014. Lebanese journalist Pierre Abi-Saab posted the photo in October 2014 on his Twitter account based on user @ Shiyoki87. The photo has the following caption: “This is the reason why we, the Kurds, respect our elders.” 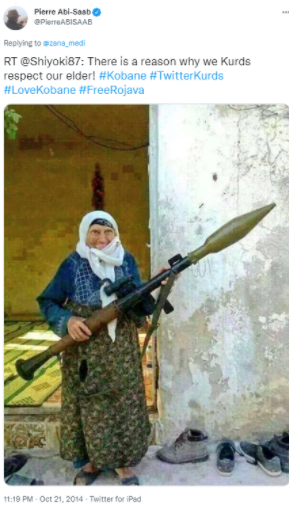 The photo was shared with different descriptions at different times; for example, according to the Iranian publication in 2018, the photo showed an Iranian woman ready to fight against ISIS. 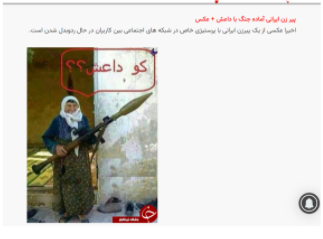 Facebook user David Tordia is a supporter of the Georgian Dream; according to his Facebook account, he manages the Facebook page “Leader 41”. According to one of the posts published on “Leader 41,” the site’s partner news websites are lid.ge, tilisnews.ge and tvalsazrisi.ge. 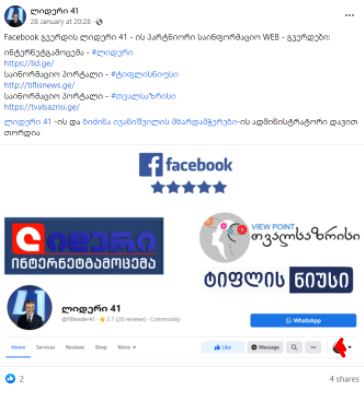 “Tvalsazrisi.ge” is a pro-Kremlin outlet, one of the authors of which is Irakli Jankarashvili, a supporter of the Alliance of Patriots of Georgia.

Misleading posts and false quotes by Leader 41 and David Tordia have been fact-checked by the Myth Detector in the past as well. For more, see out articles: