What Did Saakashvili’s Doctor Say About his State of Health? 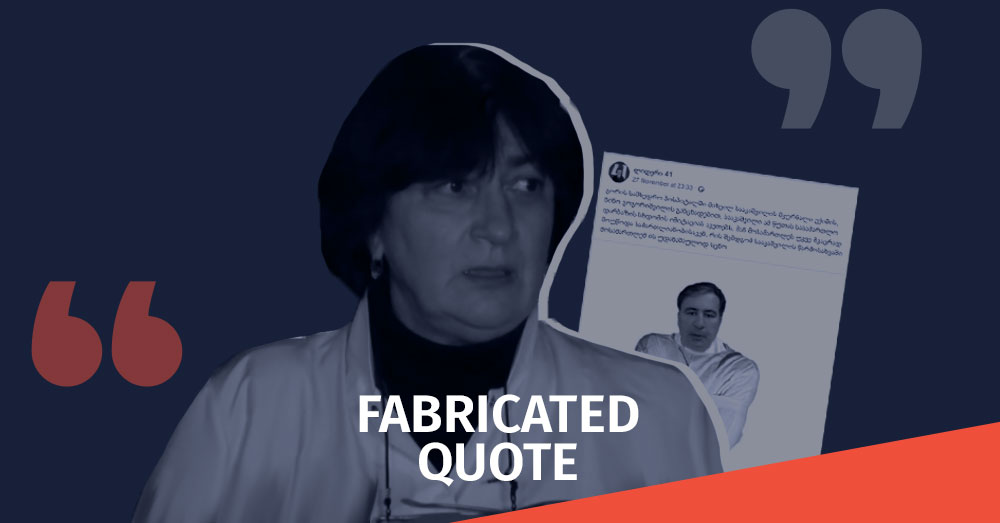 On November 27th, the Facebook page “Leader 41” published an edited photo of Mikheil Saakashvili, on which he is wrapped in a white robe. The image is accompanied by a description stating that Saakashvili’s doctor at the Gori Military Hospital, Nino Gogorishvili, said Saakashvili was imitating a courtroom session, calling on the judge to be fair, and was even presumed innocent in his imagination. 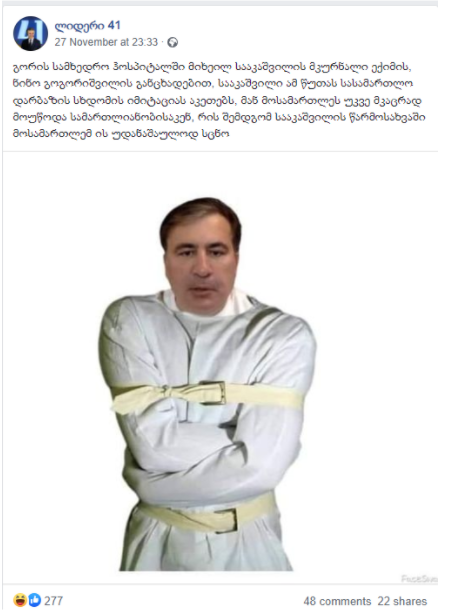 The post published by “Leader 41” spreads a fabricated statement in the name of the doctor. On November 27th, during an interview with journalists, Nino Gogorishvili only stated that Saakashvili’s health condition was satisfactory and he was preparing for the trial.

On November 27th, Mikheil Saakashvili’s doctor Nino Gogorishvili told reporters that the former president’s health condition was satisfactory, the patient’s laboratory tests were within the norm, but he still experienced slight weakness. According to the doctor, in agreement with the endocrinologists, Saakashvili’s food ratio has been expanded, he is currently regaining his strength and preparing for the trial.

Nino Gogorishvili, Mikheil Saakashvili’s Personal Doctor: “Currently, the patient’s condition is satisfactory, he experiences slight weakness, laboratory tests are within the norm. His diet is expanded, and he can now consume almost the full menu. The menu is compiled in agreement with endocrinologists, and his recovery is in progress. He is becoming more physically active, and Mr Mikheil [Saakashvili] is preparing for the trial. His condition is satisfactory for now.”

Journalist: If the progress persists tomorrow, will he be able to attend his own trial?

Nino Gogorishvili: I think so.

From the uninterrupted footage published by Radio Liberty, one can see that after talking to journalists, Nino Gogorishvili headed in the direction of the yard of the Gori Military Hospital and has not made any other statement.

The incarcerated third president of Georgia, Mikheil Saakashvili, has been on a 50-day hunger strike.

“Leader 41” is a Facebook page supportive of the ruling “Georgian Dream” party, which has repeatedly published posts containing false information and fabricated quotes.

For more on this, see the publications of Myth Detector:

–  What did Zhirinovsky Say about Saakashvili’s Arrest?

–   Who Asked Volodymyr Zelensky to Demand the Immediate Release of the Georgian Ex-president Mikheil Saakashvili?