Sakinform and Zakharova Looking for “Georgian Trace” in Skripal Poisoning

On April 16, 2018, Sakinform news agency released an article, in which it links a nerve-agent attack in Salisbury that targeted Russian ex-spy, Sergei Skripal to the functioning of the Richard Lugar Public Health Research Center in Tbilisi.

Sakinform: “Georgian trace may be found in the case of poisoning ex-GRU colonel Sergei Skripal in the Great Britain. Commenting on the issue, Maria Zakharova, a spokesperson for the Russian Foreign Ministry, focused on the U.S. Defense Department’s medical-biological activities, including in Georgia.”

Sakinform echoes the statements made by Russian Foreign Ministry spokesperson, Maria Zakharova on April 12, 2018. Commenting on the issue of Skripal poisoning, Zakharova noted that Russia was deeply concerned about the scales of the Pentagon’s medical-biological activities near Russian borders. Biological weapon and biological sabotage plotted by the United States against Russia is one of the key issues of Kremlin’s propaganda.

Speaking at a news briefing on April 12, 2018, Russian Foreign Ministry spokesperson, Maria Zakharova focused on the investigation into the Skripal poisoning case and accused London of spreading disinformation. She also spoke about the issue of “American bio laboratories in the post-Soviet space” and indirectly linked poisoning of Skripal and his daughter to Public Health Research Centers.

Georgia and Ukraine were first named as the countries allegedly producing Novichok nerve agent by Zvezda nationwide TV channel run by the Russian Defense Ministry and Franz Klintsevich of the Russian Federation Council. The latter did not rule out that Novichok came to the Great Britain either from Georgia or from Ukraine. 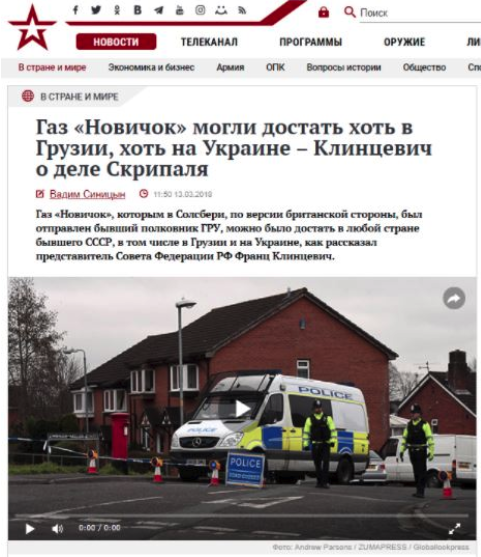 Linking the Skripal case by Russian politicians and Georgian media to the Lugar Laboratory is part of conspiracy campaign and black propaganda unleashed against the lab since the day of its establishment.

Georgian and Russian media reported in 2015 that chemical weapon used in Syria was allegedly produced in the Tbilisi-based Lugar Laboratory. According to new conspiracy theories that emerged in 2016, it was just the Lugar Laboratory that spread Zika virus in Abkhazia.

About the Lugar Lab

The Central Public Health Reference Laboratory (CPHRL), the so called Lugar Laboratory was opened in 2011 under the Framework Agreement signed in 1997 and the Agreement on Cooperation in the Area of Prevention of Proliferation of Technology, Pathogens and Expertise Related to the Development of Biological Weapons signed between the U.S. Department of Defense and the Georgian Defense Ministry in 2002. The United States provided a total of USD 350 million for the construction and technical equipment of the laboratory. In 2013 the laboratory moved to subordination of the National Center for Disease Control and Public Health (NCDC) and from 2018 the Government of Georgia will assume responsibility for full funding and operation of the Lugar center and laboratory network.