Disinformation of Yaakov Kedmi, as if Poland Plans to Deploy Troops in Ukraine 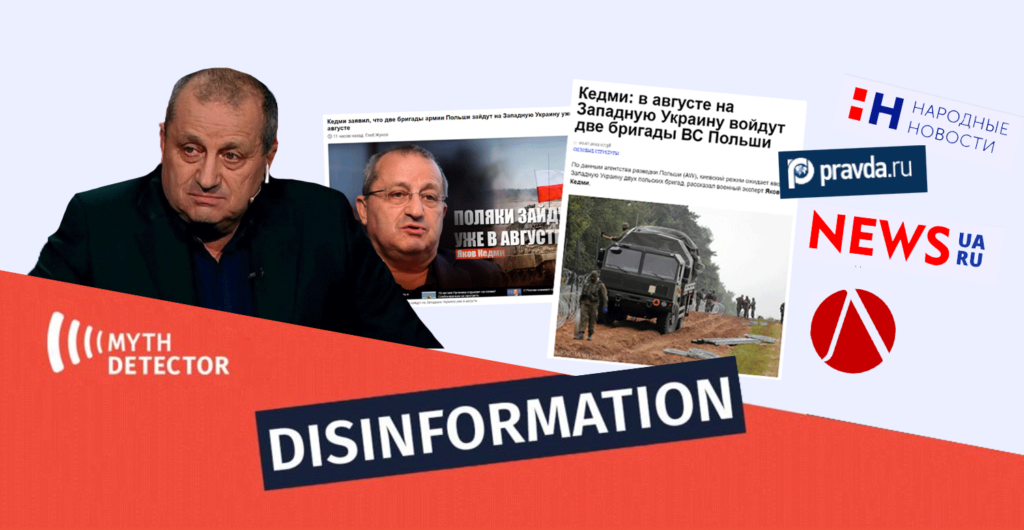 On July 20th, 2022, Russian-language media (1, 2, 3, 4) circulated a statement by Kremlin propagandist political scientist Yaakov Kedmi, noting that Poland plans to send two brigades into Western Ukraine in August and take control of the western regions, while units of the Ukrainian Armed Forces, which are currently stationed will be transferred to the front line in Donbas. Kedmi claims that the information was obtained from the Polish intelligence service. 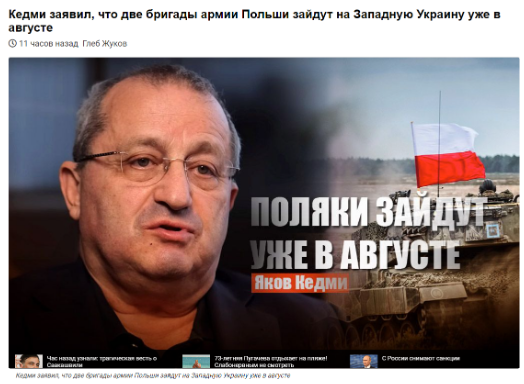 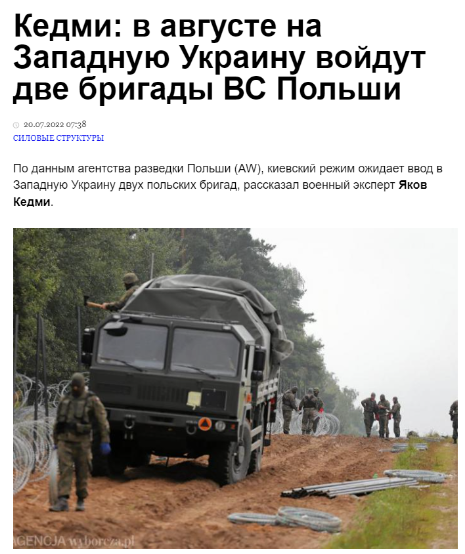 The claim that Poland plans to send troops into Ukraine and annex its Western territories is disinformation. The Polish side systematically responds to the accusations of the Kremlin. On July 21st, the spokesman of the Polish special services – Stanislaw Zharyn, labelled the mentioned claim another disinformation by the Kremlin.

Since the emergence of Russian military intervention in Ukraine, claims as if Poland was planning to regain its historical territories and annex Western Ukraine have been actively disseminated on social media. Notably, official Poland has never made territorial claims over Ukraine. On July 21st, the spokesperson of the Polish special services – Stanislaw Zharyn, responded on Twitter to the accusations of various pro-Kremlin actors, underscoring that this is a typical manifestation of Russian disinformation propaganda and an attempt to legitimize lies.

Stanislaw Zharyn: “Russian propaganda continues the disinformation operation against Poland. Successive propagandists comment on the lies spread by the Kremlin regarding the alleged plans of Poland to attack Western Ukraine.”

Similar claims about Poland’s alleged plans to annex Ukraine also emerged after the March 16th, 2022 statement by Polish Deputy Prime Minister Jaroslaw Kaczynski. Back then, Kaczynski voiced the initiative of sending a NATO peacekeeping mission to the territory of Ukraine, announcing this after a meeting with President Zelenskyy in Kyiv. Although, on the same day, one of Kaczynski’s advisers explained that the initiative did not mean NATO’s military intervention in Ukraine, the Russian propaganda media still framed the initiative as an attempt of Polish military intervention. For more on this topic, see:

The continuous accusations against Poland in the context of the war in Ukraine have been fact-checked by the “Myth Detector” in the past as well. See:

Political scientist Yaakov Kedmi appears in the “Putin List” prepared by Free Russia as a person who cooperates with Putin’s regime and is involved in the propaganda of Russian TV channels. Since the beginning of the 2010s, Kedmi has become a frequent guest of Russian TV channels, especially Россия 1 and ITON.TV.

Kedmi regularly criticizes Ukraine and constantly accuses it of anti-Semitism and collaboration with Nazism. In addition, Kedmi also justifies Russia’s actions in Syria. Kedmi is a reliable source for Russian propaganda not only in Russia per se, but also outside its borders. For example, Sputnik, one of the main Russian propaganda platforms, uses Kedmi’s figure to legitimize different opinions in Belarus, Uzbekistan and Kyrgyzstan.

For more details on Yaakov Kedmi, see the article of “Myth Detector:”