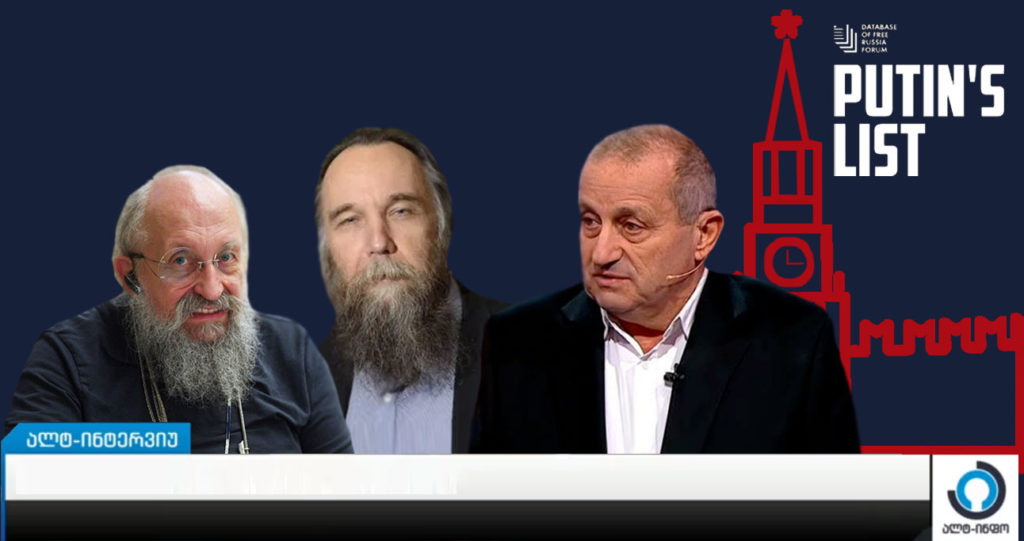 ALT-TV, a television of an ultranationalist platform Alt-Info, has been recently inviting many individuals who voice Kremlin’s ideology. Moreover, they even sponsor these TV interviews on social media. Between January 8, when ALT-TV started broadcasting, and today, a famous Russian journalist and a leader of Russia’s Left Front, Maksim Shevchenko, an ultranationalist and the founder of the Eurasianism movement, Aleksandr Dugin, a political pundit Yakov Kedmi, and a publicist Anatoly Wasserman were all interviewed by ALT-TV. Kedmi, as well as Dugin, feature in the so-called “Putin’s list” by Free Russia.

Yakov Kedmi is a political pundit who features in the “Putin’s list” by Free Russia as an individual who cooperates with Putin’s regime and participates in the propaganda of Russian TV channels. Since the early 2010s, Kedmi has been frequenting Russian TV channels, especially Russia 1 and ITON.TV. He participates in Vladimir Solovyov’s Evening, a propagandist political talk-show on Russia 1 especially often.

Kedmi regularly criticizes Ukraine and accuses it of antisemitism and collaboration with Nazism. He also emphasizes the amorality of the United States during his TV appearances. Kedmi also justifies the actions of Russia in Syria. In 2018, Kedmi called Putin to start a war against the United States.

Kedmi is a reliable source for the Russian propaganda and not only. One of the main tools of the Russian propaganda, Sputnik, uses Kedmi to legitimize various opinions regarding Belarus, Uzbekistan, and Kyrgyzstan. Interestingly, Sputnik Kyrgyzstan and Sputnik Belarus cite identical statements by Kedmi. In these statements, Kedmi underlines the importance and inevitability of Belarus “returning” to Russia.

Yakov Kedmi has also featured in a Lithuanian investigation by Delfi edition. The edition was studying the targeted campaign of influencing the public opinion of the Russian-speaking population in the Baltic states. It turned out that groups that disseminated conspiracy theories, disinformation, and manipulations were managed from Russia. One of the actors participating in the Kremlin’s propaganda campaign was Yakov Kedmi. According to Delfi, various accounts on different social networking sites, registered under the name of Yakov Kedmi, were disseminating propaganda materials from websites registered in Russia. The materials mentioned the importance of Baltic states’ cooperation with Russia.

Kedmi is also an important source of pro-Kremlin media outlets in Georgia. He often features on the page of Georgia and the World and popularizes the Russian coronavirus vaccine as a counterweight to the American one (“In Russia, this issue is not discussed in the light of getting rich. In the American pharmaceutical sphere – the other way round”); glorifies authoritarian countries – Russia and China (“Nowadays, the United States is forced to catch up with Russia and China in terms of main types of strategic arms”). Kedmi’s opinions on the World War II often feature in Russian media. He mainly attributes the actions of allied nations during the World War II to their fear towards Russia and thinks that Europe never learnt the lessons of the War.

Kedmi ran an organization called Nativ in 1992-1999 that was facilitating the return of Jews, living in the Soviet Union, to their homeland. In the last years of Kedmi’s directorship, the organization faced several corruption scandals, resulting in Prime Minister Netanyahu changing its status and Kedmi’s resignation.

Anatoly Wasserman is another foreign actor of the Kremlin’s propaganda. His country of origin is Ukraine, is a publicist, and has been living and working in Russia for already 20 years. In 2016, Wasserman was granted the citizenship of Russia based on Vladimir Putin’s decree. In his interview with a Russian news agency Tass, he stated that he was happy due to such a recognition of his deeds. In Ukraine, Wasserman is accused of separatism and there is even an ongoing investigation against him.

Wasserman is the host and the author of articles in a TV program “Открытым текстом” (With an open text) on Ren.tv, where he is presented as a “famous journalist, political consultant, and a winner of various intellectual games”. Wasserman was also the host of a talk-show “Беседка с Анатолием Вассерманом” (Conversation with Anatoly Wasserman) on Komsomolskaya Pravda.

In his interview with RIA FAN (Federal News Agency), Wasserman commented the cyberattack on Georgia in 2019 and noted that there was no reason to think that the attack was directed from Russia and that many cyberattacks around the world are also connected to US-based hackers.

In an article about the inefficient way of managing the pandemic in the United States, Russia Today relies on Anatoly Wasserman, who claimed that, unlike Russia, the United States was unable to efficiently manage the crisis due to privatization of the medical system.

Like Kedmi, Wasserman is an important respondent for Sputnik in various countries. Besides Sputnik Kazakhstan, Belarus, Armenia, Uzbekistan, and Kyrgyzstan, Sputnik Abkhazia also uses his opinions. Wasserman’s statement that the weakening of the United States would result in strengthening the independence of other countries has proved especially interesting for Sputnik Abkhazia. 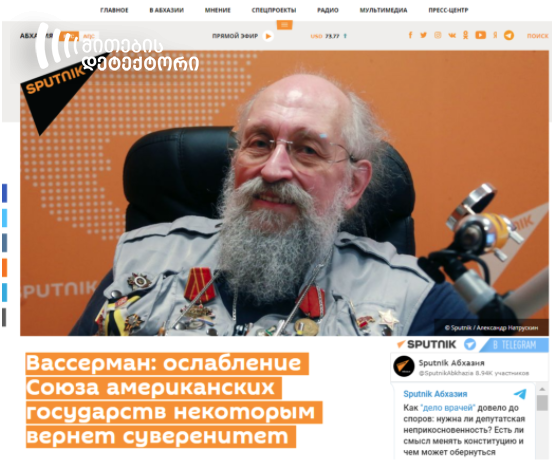 Anatoly Wasserman also opposes the independence of Ukraine. According to him, it is a part of Russia:

Anatoly Wasserman: “I oppose the sovereignty of Ukraine and do not think that this part of Russia should be separate from the rest of the country.”

Wasserman published a “book-manifesto” called “Ukraine and the Rest of Russia”, where he argues about the inevitability of Ukraine joining Russia. 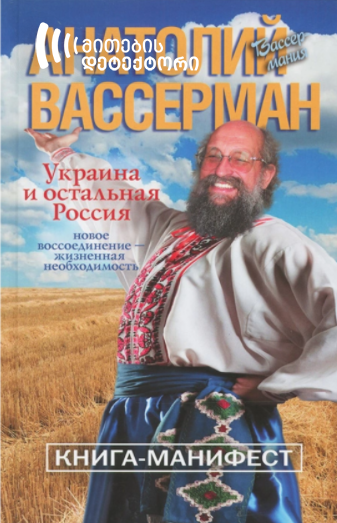 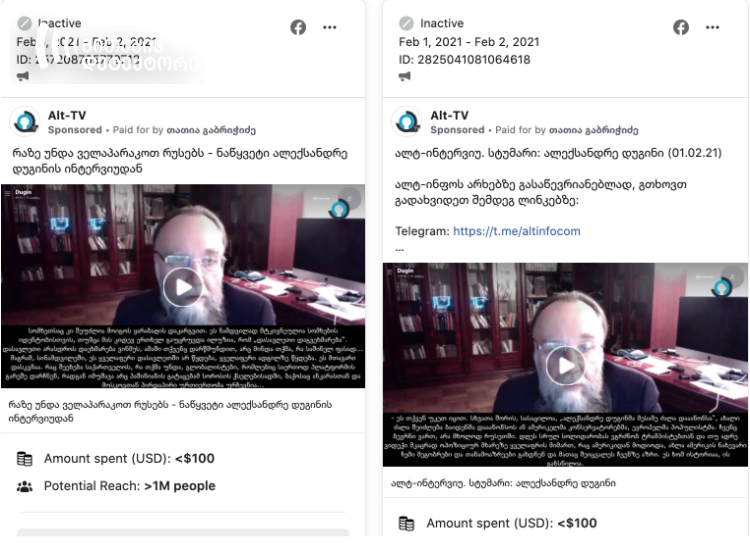 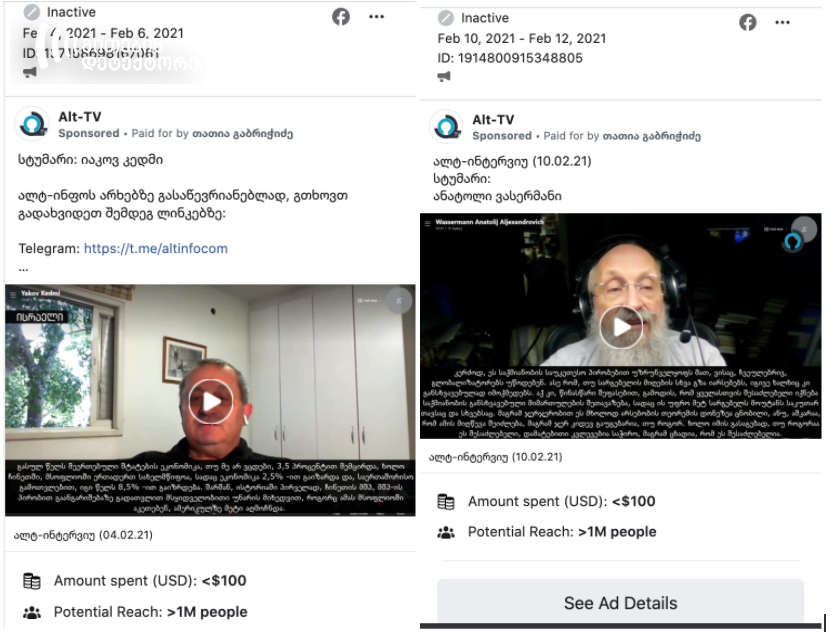 Read the articles by Myth Detector about another Kremlin-affiliated guest of ALT-TV, Aleksandr Dugin:

Manipulations connected to Yakov Kedmi and verified by Myth Detector: