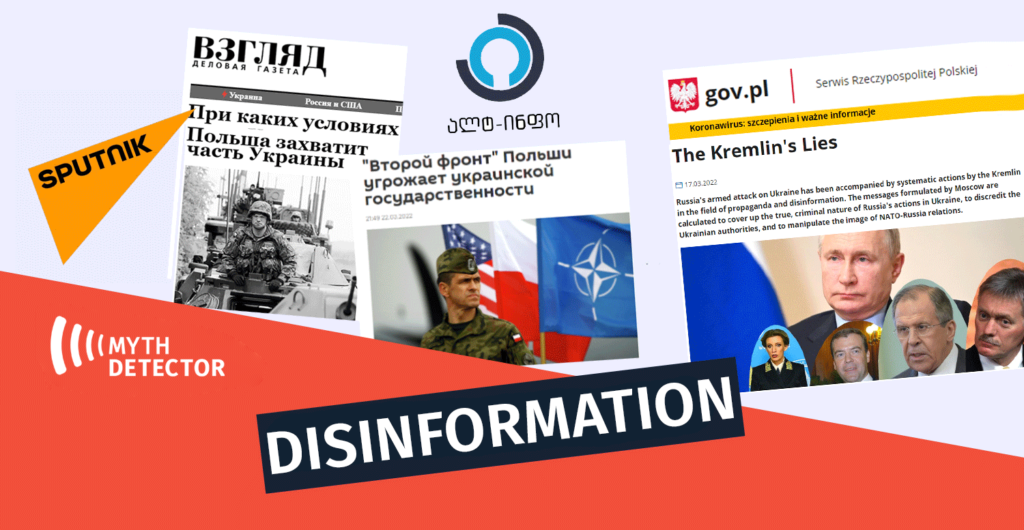 On March 22nd, 2022, the Kremlin’s propaganda online outlet “SPUTNIK Uzbekistan” published an article entitled “Poland’s Second Front Threatens Ukrainian Statehood,” claiming that Warsaw’s military-political activity is aimed at dividing Ukraine and allowing Poland to annex the regions of western Ukraine. An article with similar content was published by the Russian outlet VZ.RU on March 23rd with the headline: “Under what conditions will Poland seize part of Ukraine.”

The information that Poland is planning to annex the territories of Ukraine has been disseminated by the Russian social media accounts – Adama Dosso, myday.kms, Игорь Цой and Facebook group – – Артефакты и Факты. Social media users claimed that Poland wants to involve NATO in the Russia-Ukraine conflict and then, by taking advantage of the situation, seize western Ukraine, namely, the annexation of five regions of western Ukraine – Volyn, Lviv, Yavno-Frankivsk, Ternopil and Rivne.

An identical claim about Poland’s alleged plan to seize the territories of Ukraine was voiced on March 24th by the Georgian pro-Kremlin TV channel “Alt-Info.” According to Giorgi Kardava, the host of “Alt-Info,” who happens to be the leader of the newly-created Conservative Movement party, NATO refused the initiative of Poland to occupy the western part of Ukraine and did not risk the implementation of the peace initiative individually. According to Kardava, the plan was to occupy the territories of Ukraine that were part of the Polish Empire.

Giorgi Kardava, Alt-info, Conservative Movement: “The plan of Poland to occupy the western parts of Ukraine was met with a harsh response that NATO would not support such an action, and Poland alone could not dare to implement the so-called peacekeeping operation. In fact, Poland would never leave that territory. In general, the dream of Poles is Rzeczpospolita, i.e. the Polish Empire…”

The claim that Poland is planning to send troops to Ukraine and annex the territories of western Ukraine is disinformation. In fact, Poland initiated the deployment of a NATO peacekeeping mission in Ukraine. The initiative was voiced on March 16th by the Polish Deputy Prime Minister Jarosław Kaczyński in Kyiv, but at a special session of the Alliance on March 24th, NATO member states did not support the initiative. The Polish government has issued a statement labelling allegations about Poland having territorial claims in western Ukraine as Kremlin disinformation.

Claims that Poland was planning to return to the historic territories have been circulating since Poland’s deputy prime minister, Jarosław Kaczyński, came out with an initiative to send a NATO peacekeeping mission to Ukraine. The initiative was voiced after the deputy PM’s meeting with President Zelenskyy in Kyiv. The leaders of the Czech Republic and Slovenia visited Ukraine together with Kaczyński.

“I think that it is necessary to have a peace mission – NATO, possibly some wider international structure – but a mission that will be able to defend itself, which will operate on Ukrainian territory,”- Kaczyński told a news conference

On March 16th, one of Kaczyński’s advisors clarified that the initiative did not entail a NATO military intervention in Ukraine.

“The position remains unchanged. Neither Poland nor NATO are planning to take part in the world.” Told Michał Dworczyk to the Polish radio.

The initiative of Jarosław Kaczyński was discussed by NATO members at an extraordinary summit of the Alliance on March 24th. As NATO Secretary-General Jens Stoltenberg stated, the discussion included a wide range of issues, although there was no agreement on the subject. According to Stoltenberg, NATO member states have confirmed that they are not ready to “close the skies” for Russian planes, nor was NATO planning to pursue a military intervention in Ukraine. However, it was decided at the meeting that NATO would send additional weapons to Ukraine.

“The message is that we have to send united, and we also need to provide support to Ukraine and, at the same time, we have a responsibility to ensure that this conflict does not become a full-fledged war between NATO and Russia. This is the reason our allies have stressed that we will not deploy troops on the ground in Ukraine because the only way to do that is to prepare to engage in a full conflict with the Russian troops.” – said Jens Stoltenberg at the press conference on the NATO extraordinary summit.

According to the NATO Charter (POLICY AND DECISION-MAKING), decisions in NATO are made by consensus, after discussion and consultation between member countries.

A decision taken by consensus is an agreement reached by consensus supported by each member state. That is, a decision made on behalf of NATO is an expression of the collective will of the sovereign member states of the Alliance. The NATO Secretary-General even said that no agreement could be reached on Kaczyński‘s initiative.

Official Poland has never made any claims regarding the annexation of the Ukrainian territories. On March 17th, a statement was posted on the official website of the Polish government stating that the information that Poland allegedly had claims on western Ukraine was part of the Kremlin’s disinformation propaganda. The statement was issued by the Polish Special Services Agency. 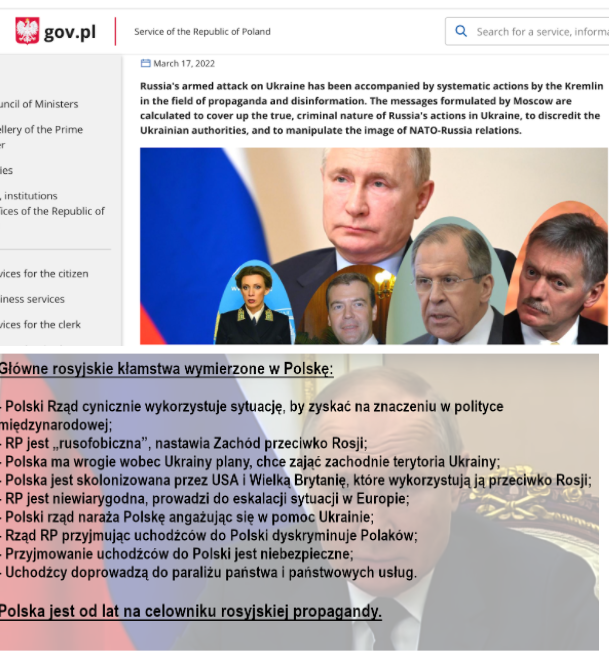 The claim that Poland should retake the territories of western Ukraine was voiced by former Vice President Konrad Rekas. On March 14th, a spokesperson for the Special Services Agency also spoke to the Polish radio about the issue. He said that Rekas is one of the main propagandists of the Kremlin propaganda in Poland – who is still acting against Poland.

“Rękas’s actions are calculated to create tensions between Poles and Ukrainians and to manipulate the image of Russia’s war against Ukraine. Rękas implements Russian narrative lines.”- said the spokesperson of the spokesman of Special Services Agency of Poland.

Konrad Rekas is the founder of “Restytucja Kresów.” The organization was established in 2015 and seeks compensation or the return of lands that belonged to Poland in the 18th century.

Prior to the Polish initiative to deploy a NATO peacekeeping contingent in Ukraine, Russian social media users actively disseminated a map, alleging that it exposed a plan to redistribute Ukrainian territory. “Myth Detector” found that the map was actually old and that it was from a story aired by the Polish Public Broadcaster on March 24th, 2014. The map referred to a letter from Vladimir Zhirinovsky to the Polish Ministry of Foreign Affairs, in which Zhirinovsky offered Poland to participate in the redistribution of Ukraine, and the map was also used to visualize this redistribution. For more on this topic, see:

Is Poland Going to Share the Territories of Ukraine with Russia, Hungary and Romania?

Stirring up historical trauma and dividing societies is part of the Kremlin’s propaganda, which during intelligence operations in various countries.

Взгляд (vz.ru) was created as a counterweight to the current liberal publications, vz.ru’s website is now published by the Kremlin Institute for Social Research ЭИСИ.

The Russian news outlet has been publishing since May 2005. The publication has been owned by the Institute for Socio-Economic and Political Studies (ISEPI) since 2013 and is headed by Dmitry Badovsky, former Deputy Head of the Department of Internal Affairs of the Presidential Administration. Since August 17th, 2017, the publication has been controlled by the Social Research Expert Institute, which is associated with the administration of the President of Russia and is  by Anton Vaino. According to a study by Lucas Andriukaitis, a researcher at the Atlantic Council DFR Laboratory, the news agency vz.ru portrayed Lithuania as a treacherous neighboring country that aims to divide Russia and seize parts of its territory (Kaliningrad).

Sputnik is a multimedia international project which is one of the main media platforms of Russian propaganda. The outlet belongs to Russia Today, an agency set up by the Russian government in 2013, and has repeatedly disseminated Kremlin disinformation about Georgia or other countries.