Who Wants to Divide Ukraine – Poland or Zhirinovsky? 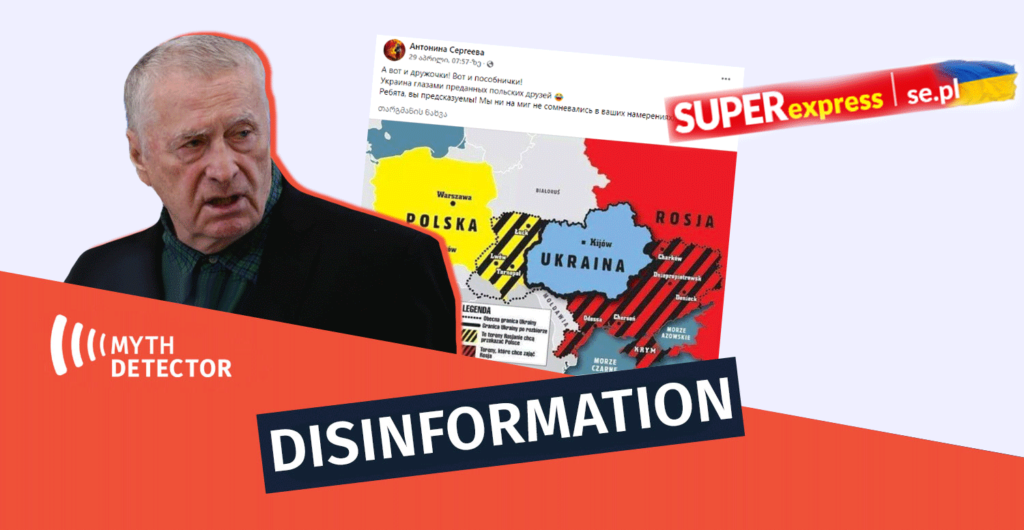 On April 29th, the Facebook account “Антонина Сергеева” published a map showing the western part of Ukraine belonging to Poland and the southern and eastern parts to Russia. The Facebook user disseminates the map with the following description: “These are friends! Here are the supporters! Ukraine through the eyes of traitorous Polish friends. Friends, you are predictable! We did not doubt your intentions for a moment.” 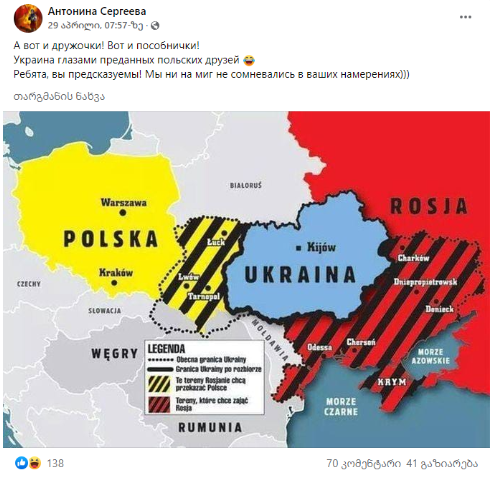 The information about Poland planning to seize western Ukraine is false. The map disseminated on social media shows the plan of redistribution of Ukraine proposed by Russia, not Poland. The map was first shown in the Polish media in 2014 to illustrate a letter sent by Zhirinovsky to the Polish Ministry of Foreign Affairs. Zhirinovsky offered Poland to participate in the redistribution of Ukraine and to hold a referendum on the annexation of western Ukraine.

The mentioned map was first published in the Polish newspaper ‘super express’ on March 25th, 2014, illustrating a letter from Vladimir Zhirinovsky. In 2014, Zhirinovsky offered Poland to take part in the redistribution of Ukraine and reclaim the territory that historically belonged to it. The first story on this topic was prepared by the Polish Public Broadcaster on March 23rd, 2014, which later gained the attention of other media as well. On March 25th, 2014, an article was written in ‘super express’ about Russia’s offer, and the map used to illustrate the plan to invade Poland in Ukraine was used as a visualization.

The legend of the map states that this is an illustration of the redistribution of Ukraine proposed by Russia.

Notably, this is the second map showing the alleged ‘seizure’ of the Ukrainian territories by Poland. A different map with identical descriptions has been disseminated in the past. See the article of “Myth Detector” for details:

Disinformation about the alleged invasion of Ukraine by Poland has intensified since Poland proposed the initiation of a NATO-led peacekeeping mission in Ukraine on March 16th. This initiative was perceived by the Kremlin actors as a Polish military intervention. A statement on the official website of the Polish government on March 17th also stated that allegations about Poland having territorial claims on western Ukraine are part of the Kremlin’s disinformation. For more on this topic, see the “Myth Detector” article:

Inciting historical trauma and dividing societies is an integral part of Kremlin propaganda. After the emergence of the Russian-led war in Ukraine, pro-Russian actors are trying to convey the idea that Poland is using the war for its own purposes and wants to seize western Ukraine.