Is Poland Going to Share the Territories of Ukraine with Russia, Hungary and Romania? 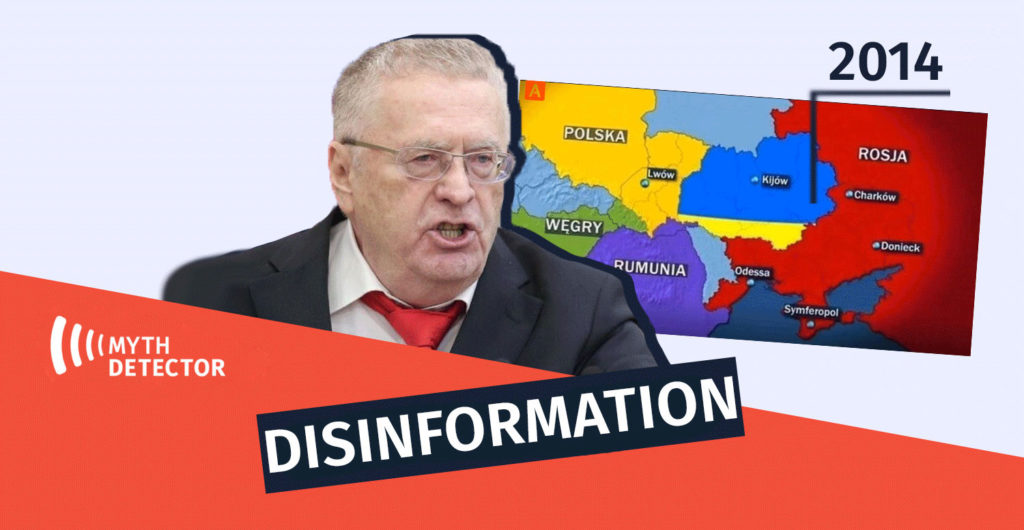 On March 23rd, the Facebook page “Новости и Политика” [News and Politics] published a story prepared by the YouTube channel “Аспекты.” The story alleged that Poland is preparing a plan to invade Ukraine. Viewers are urged to pay attention to the footage shown on Polish television, which shows a map in which Ukraine is divided between several countries – Poland, Russia, Romania and Hungary. According to the author, the footage was taken in different units of the Polish Armed Forces.

The photos with a similar description were published by the Russian outlet – u-f.ru. According to the outlet, the military has already distributed new maps in Poland, where Ukraine is redistributed between Poland, Russia, Romania and Hungary.

The photo of the map where Ukraine is divided between the above-mentioned states was also shared by the Facebook user “Hovhannes Azati Tadevosyan.” The distributors of the photos claim that the map is currently circulating in the Polish media. 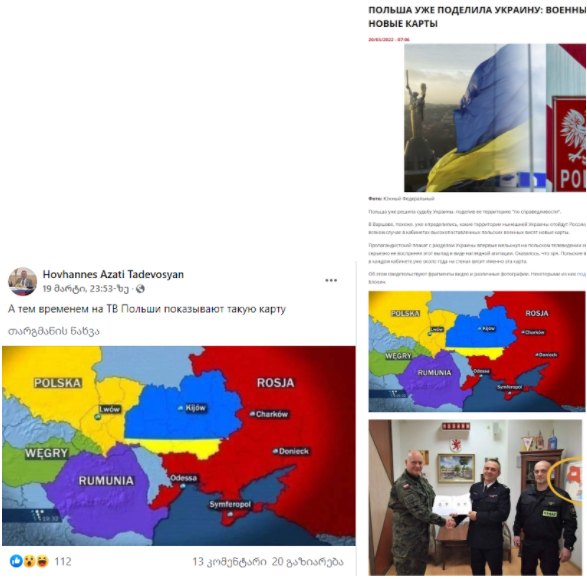 The claim that Poland is planning to invade Ukraine is false: 1. The map is, in fact, old and it is from a story aired by the Polish Public Broadcaster on March 24th, 2014, in relation to a letter from Vladimir Zhirinovsky to the Polish Foreign Ministry. Zhirinovsky offered Poland to participate in the redistribution of Ukraine, and the map was also used to visualize this redistribution. 2) The second photo does not depict the soldiers of the Polish Armed Forces but the firefighters, and in the authentic photo, a map on the wall does not appear at all.

On the disseminated photo of the map, the left corner indicates the time – 19:32. It is noteworthy that in 2014, in the news program of the Polish Public Broadcaster, the map was aired exactly at this time, which also confirms that the photo was indeed cut from this story. 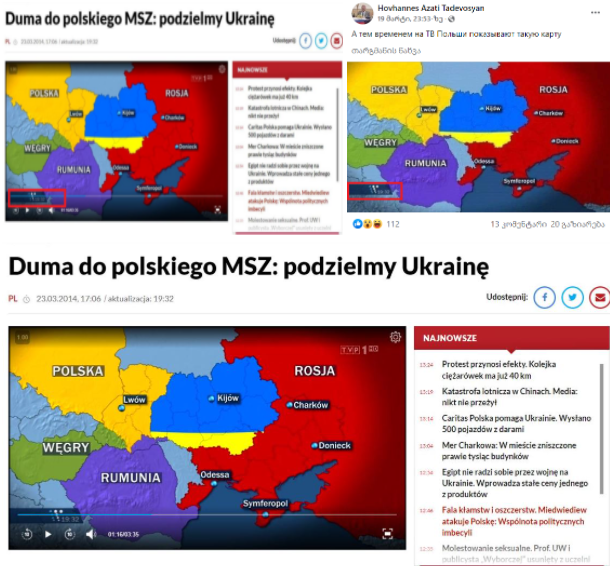 On March 17th, 2014, Duma MP Vladimir Zhirinovsky wrote a letter to the Polish Ministry of Foreign Affairs, offering Poland to take part in the redistribution of Ukraine and regain the territory that had historically belonged to it. Zhirinovsky called on Poland to hold a referendum on the annexation of five regions of Ukraine – Volyn, Lviv, Ivano-Frankivsk, Ternopil and Rivne. The Polish Foreign Ministry then confirmed the reception of the letter, though calling it ridiculous. 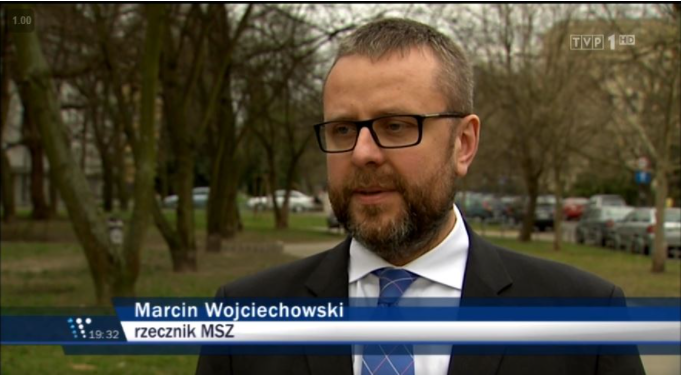 “The proposal is so ridiculous that we cannot even take it seriously.” – stated Marcin Wojciechowski, spokesman for the Polish Foreign Ministry in 2014.

According to the 2014 information of the Polish Public Broadcaster, an identical proposal from Zhirinovsky about redistributing Transcarpathian and Chernivtsi regions were received by Hungary and Romania.

Sending a letter to the Polish Foreign Ministry by Zhirinovsky was also confirmed in March 2014 by the Liberal Democratic Party, which he himself founded. The party’s press service told Interfax that the letters were sent to the embassies of Poland, Hungary and Romania. In the letter, they offered to hold a referendum on the annexation of the territories that previously belonged to them.

Zhirinovsky voiced an identical statement in his March 2014 speech to the Russian Duma. He said it was time for not only Russia but also Poland, Hungary and Romania to regain their territories. 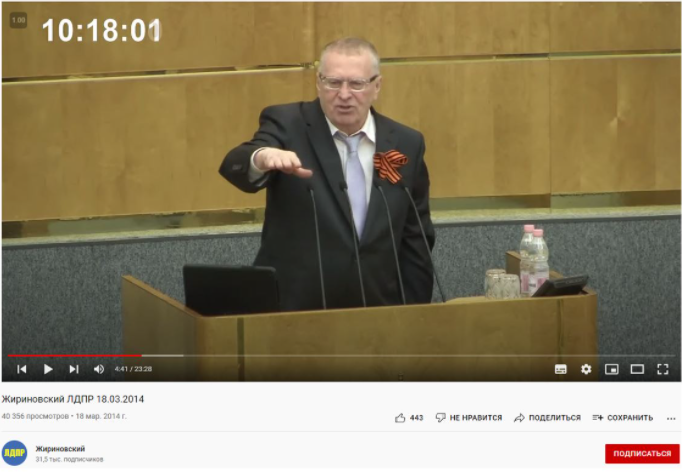 “I think it is time not only to return Russian lands under the Russian flag but also to return the territory of western Ukraine to Poland, Hungary and Romania,” – said Vladimir Zhirinovsky.

According to “Новости и Политика,” the second photo shows the soldiers of the Polish Armed Forces. In fact, the photo depicts the commander of the fire brigade, Colonel Dariusz Machula, and the junior officer, Hubert Makara, along with the head of the Dravsko Pomorskie State Fire Department, Pavel Dimec. The photo was posted on Facebook on September 28th, 2021, on the official Facebook page of Marshal Ozef Pivsudski 2nd Brigade of the Mechanized Legion. A photo of the event is accompanied by a description stating that the purpose of the meeting was to conclude an agreement between the Military Fire Service and the State Fire Service Regional Headquarters on membership in the National Rescue and Fire Fighting System. 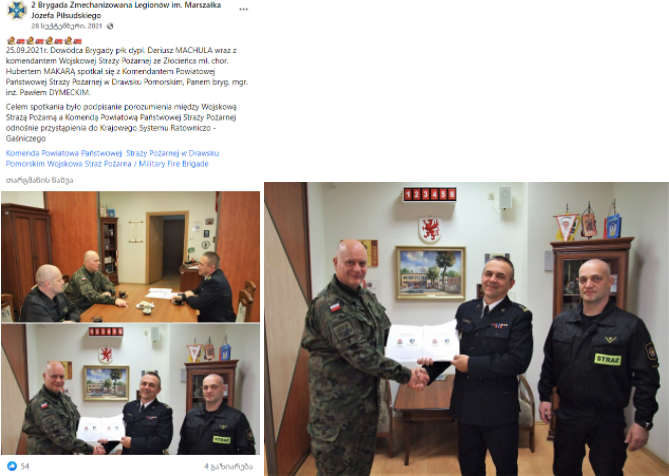 In the original photo, the map can be seen neither on the wall nor in the frame, since it has been manually added to the disseminated photos. The official Facebook page of Marshal Ozef Pivsudski brigade has published an additional photo, which offers a different angle of the wall. Interestingly, the map cannot be seen in this version as well, confirming the fact that the map has been manually added to the photo later. 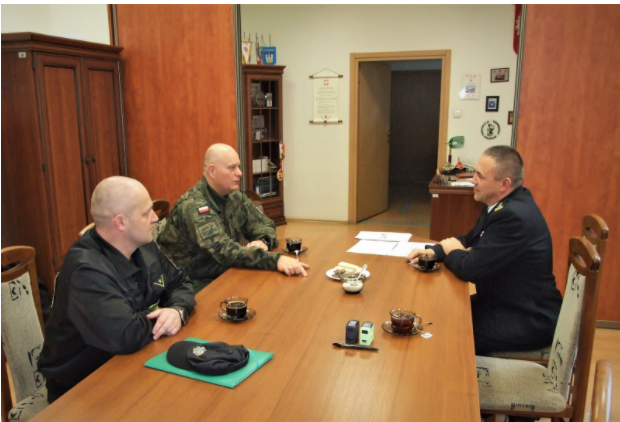