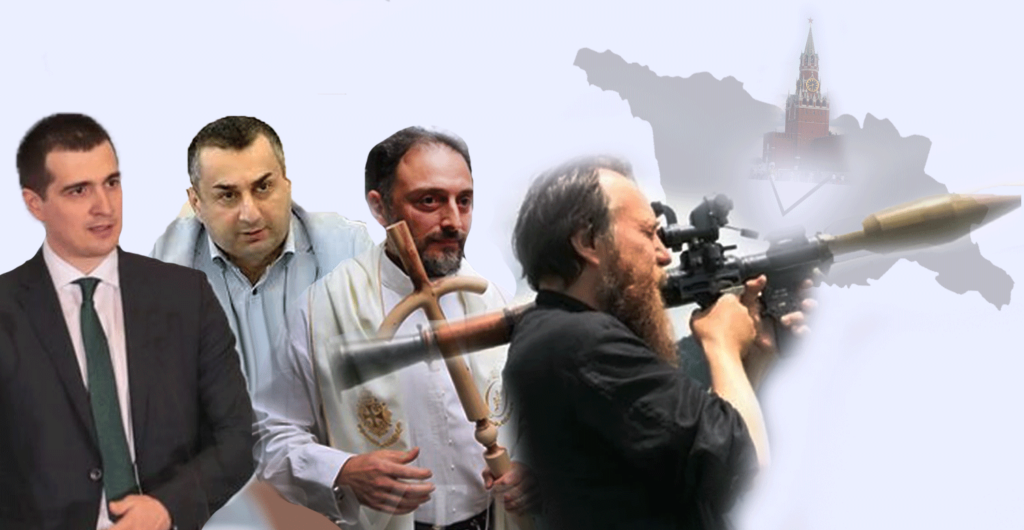 Shortly after the death of Daria Dugina, the daughter of the founder of the Eurasianist movement and far-right philosopher Aleksandr Dugin, pro-Russian actors on social networks began to spread fragments of Dugin’s 2019 interview. The videos were shared mainly by the pro-Kremlin party “Conservative Movement” and their supporters (1, 2), as well as by Levan Vasadze’s “World Congress of Families” Facebook page. According to the “Conservative Movement,” Dugin realized his mistakes and drastically changed his position towards Georgia. In the videos, Dugin notes that Russia does not need a pro-Russian, but a pro-Georgian Georgia, which will play the role of a good brother and be faithful to Georgian traditions, identity and ideals. 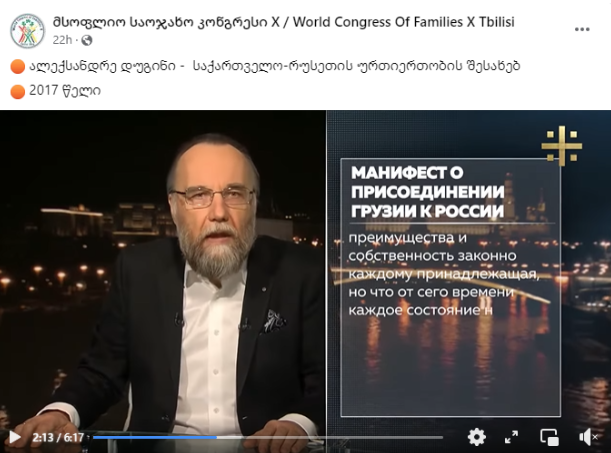 On August 22-24th, a number of pro-Kremlin Facebook pages (1, 2, 3, 4, 5)  and accounts (1, 2, 3) have been disseminating the same video in a coordinated manner. According to the description, in the video, Dugin explains to Russian people why they should love and appreciate Georgians. 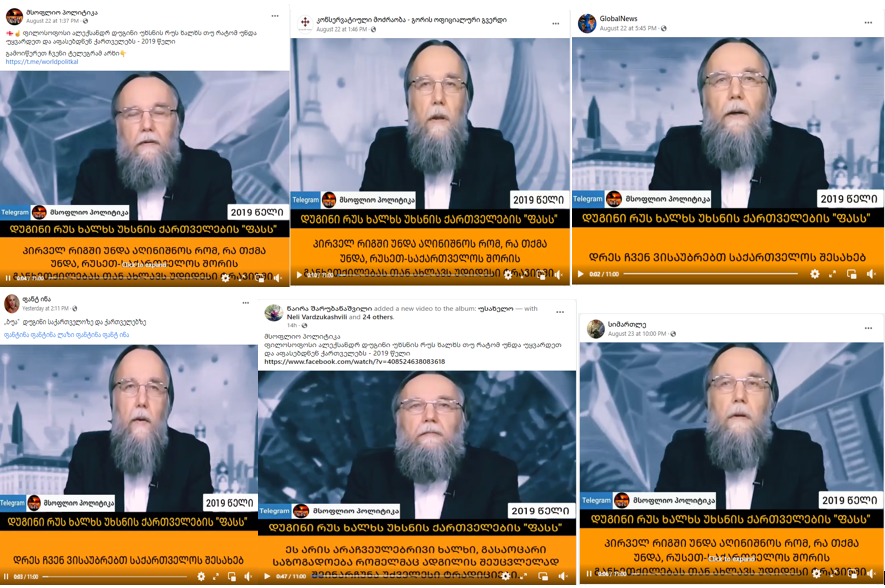 On August 22nd, host Davit Akhvlediani and guest Nikoloz Mzhavanadze made similar statements on the air of pro-Kremlin Alt-Info TV. According to Akhvlediani, in 2008, when Dugin called on Russia to bring tanks to Tbilisi and pursue a complete annexation of Georgia, he simply meant to rid the country of Western enemies, and according to Mzhavanadze, Dugin changed his opinion after that and became a true ally of Georgia.

Davit Akhvlediani: “He has the utmost respect for all ordinary Georgian people. By those words, he meant that liberals, globalists, ecumenists, i.e. all those people who question the prospects of this country, should have been eliminated from Tbilisi.”

Nikoloz Mzhavanadze: “I wish everyone would change their position the way Dugin did; they are circulating these videos of “Tanks on Tbilisi” and not showing what statements this person made afterwards, that we don’t need a pro-Russian or pro-American Georgia, we need a pro-Georgian one. This person underwent a true transformation; this person became our ally, and by the way, a very big lobbyist for Georgia…” 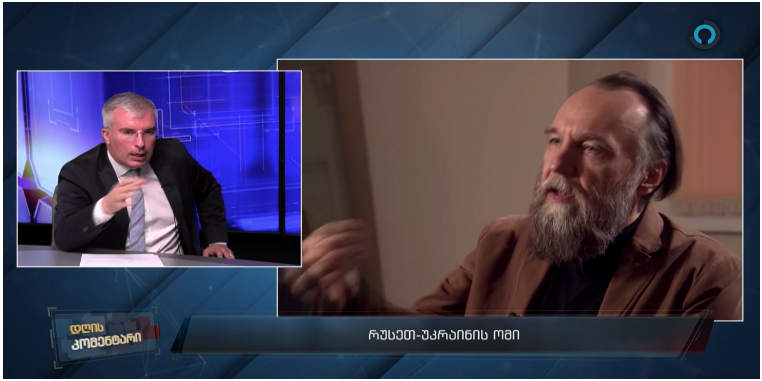 In fact, Dugin’s position about Georgia still aligns with the model of anti-Western propaganda, which on the one hand, involves instilling fears in the population and inciting distrust towards allies, and on the other hand, as an alternative, offers Georgia to join the Eurasian orbit. Messages presenting Georgia as an integral part of the Eurasian empire are found in a number of Dugin’s interviews. Notably, Dugin spoke about the protection of Georgian nationalism and patriotism in 2010 as well, although stressing that Georgia should sort out its relations with Russia only in order not to lose more territories.

Dugin spoke about the “present and future” of Russia-Georgia relations in 2019, during the “День ТВ” program. While Dugin did not emphasize the need to bring tanks to Tbilisi, the messages voiced by him are still in line with the anti-Western propaganda model, which manipulates religious sentiments, incites mistrust towards Georgia’s strategic allies and emphasizes the need to move the country into the Russian orbit. Dugin’s messages, detailed below, can be broken down into a three-step model as follows: 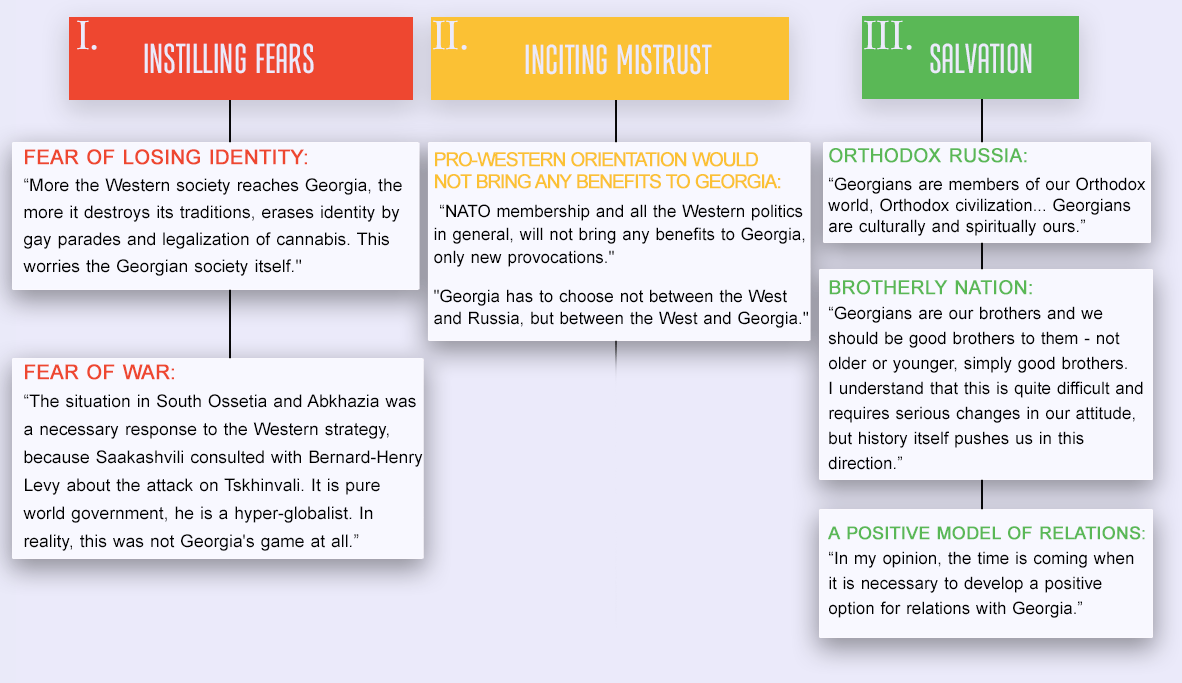 Notably, the same model of messages can be found in Dugin’s 2021 interview with “Alt-Info.” For more details, see the article prepared by the “Myth Detector:”

Noteworthy that in the 2019 program of День TV, Dugin also touches on the issue of occupied territories and emphasizes once again that the responsibility of the Russian people in the loss of Abkhazia and Samachablo is minimal, while the wrong steps taken by the Georgian authorities were decisive in this direction. Dugin notes that these territories were always under the Russian umbrella; therefore, protecting them was simply a matter of ethics.

Speaking about the dynamics of Russian-Georgian relations, Dugin asserts that the return of territories for Georgia is a utopia since there is a precedent and a history that cannot be reversed.

Aleksandr Dugin: “Of course, we cannot say that we will return everything to you and everything will be fine because there is history, there is recognition and the independence of Abkhazia and South Ossetia.”

More importantly, in the words “Tanks to Tbilisi” Dugin never meant the liberation of the country from the western enemies but the full-scale annexation of Georgia. In his 2008 address, Dugin claimed that Georgians committed war crimes and killed the innocent Ossetian population, and the people who are leading the genocide of another nation are not allowed to be called people. Dugin stressed that the real victory of Russia would be the complete occupation of Georgia and reunification under the Russian protectorate. In a letter published in the same year, Dugin calls the occupation of Georgia voice of Russian national history.

Aleksandr Dugin: “Our victory will be the complete occupation of Georgia and the establishment of free, democratic order. This is our victory! Freedom for Georgia, freedom for Ossetia under the national protectorate of Russia! Tanks to Tbilisi!”

Dugin also spoke about the occupation in 2015 when he noted that, among other ways, the occupation of Georgia might be considered in order to prevent the deployment of American military bases in Georgia.

Statements made by Dugin about Georgia in different years are still aimed at cultivating anti-Western sentiments, which entails the instrumentalization of war fears and identity issues, and suggesting normalization of relations with Russia as a solution.

Alexander Dugin is the founder of the Eurasianist movement and a far-right philosopher. Eurasianism of Dugin advocates Russia’s expansion and the primary spiritual and political role of Russia on the Eurasian continent and is based on the Russian Orthodox vision. In 2015-2016, Alexander Dugin was also the editor-in-chief of the far-right Царьград TV owned by Konstantin Malofeev.

According to Dugin’s Eurasianist vision, Russia is an imperial civilization based not on ethnic and religious but on cultural identity, but it cannot be fully realized until Eastern Slavs, and all Eurasian brothers are united under it. Because of his involvement in the Crimean conflict and actions against the sovereignty and territorial integrity of Ukraine, the US put the radical philosopher on the list of sanctioned persons. It should also be noted that Dugin actively supports the independence of Abkhazia and so-called South Ossetia. On August 8th, 2008, in an interview given to the Russian radio “Ekho Moksvi,” he mentioned that the Georgians committed genocide against the Ossetian people. Later, in 2010, he said that Georgia should not have the illusion of returning its territories, while close cooperation with Russia is necessary to not lose more territories.

Dugin actively supports Russia’s intervention in Ukraine. Back in 2014, he called on Russian President Vladimir Putin to launch a military attack on eastern Ukraine to restore Russia’s moral authority. Dugin believed that it was necessary to kill Ukrainians to achieve this goal. Regarding the 2022 Russia-Ukraine war, Dugin thinks Russia should not stop until it dismantles the model of nation and state that Ukrainian nationalists built with Western support. According to Dugin, the defeat in the “special military operation” is equivalent to the end of the world not only for Russia, but for the whole world, while Russia’s victory will be the beginning of new multipolar world order.

Notably, the pro-Kremlin “Conservative Movement” is distinguished by its sympathy for Dugin’s ideas. Dugin himself appeared on the air of Alt-Info TV several times (1, 2), and Alt-Info itself sponsored interviews with Alexander Dugin on social networks. Alexander Dugin expressed support for the violence of July 5th, 2021, in Tbilisi on social media, saying that this was the Georgia he admired. For more on this topic, see the Myth Detector article: