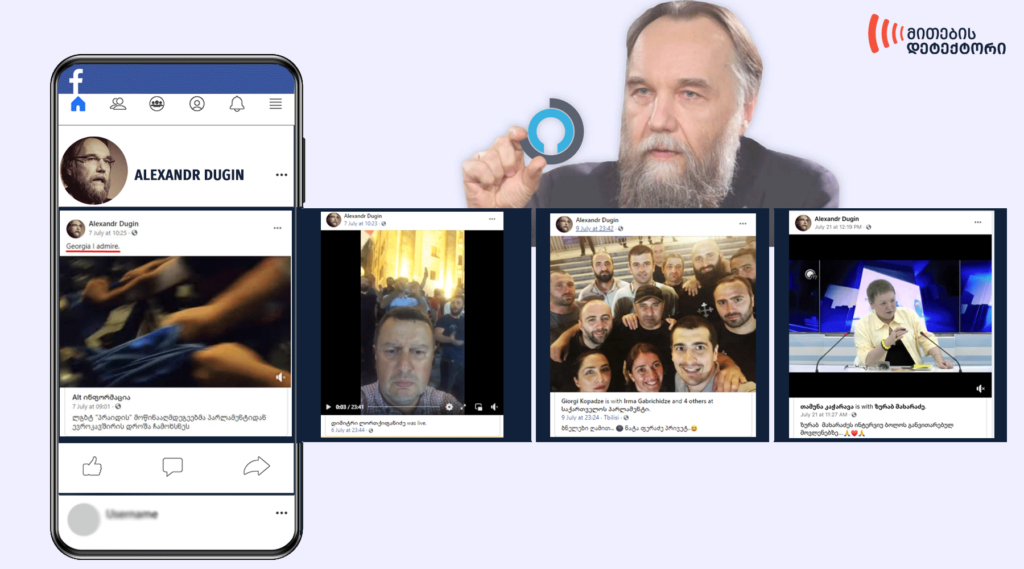 The founder of the Eurasia Movement, far-right philosopher Alexandr Dugin, who is closely linked with Levan Vasadze’s newly-created political Party “Unity, Essence, Hope” and his TV outlet “Alt-Info,” has been actively monitoring and encouraging the proceedings of the violent demonstration on July 5th and its aftermath.

On July 5th, during the violent counter-Pride demonstration, more than 50 journalists were physically assaulted, while one cameraman, who received physical injuries, was found dead on July 11th.   Due to prior health complications, the leader of the violent demonstration, Levan Vasadze, was observing the event from Moscow. Among the demonstration organisers were also the hosts and founders of “Alt-Info,” whose statements and speeches were also extensively shared by Dugin.

During July 1-21, regarding the events of Tbilisi, Dugin has:

The chronological and content-wise order of Dugin’s posts is as follows:

July 1st: Calls of “Alt-Info” hosts to participate in the violent counter-demonstration of July 5th. 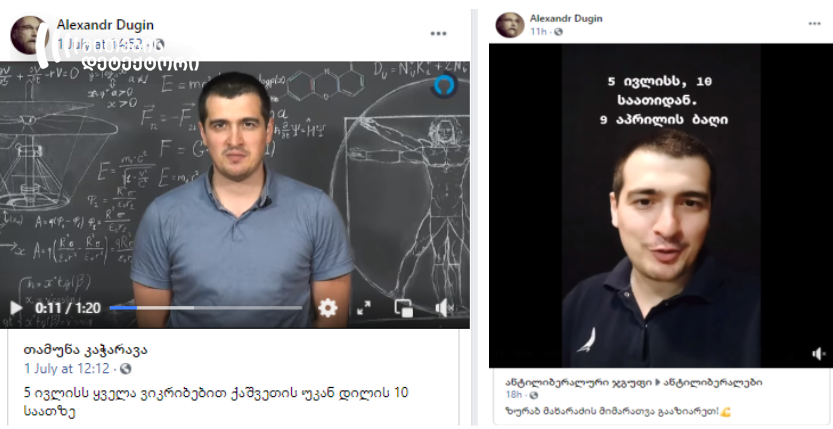 July 2nd: Calls of Levan Vasadze to mobilize the population to participate in the counter-demonstration of July 5th. 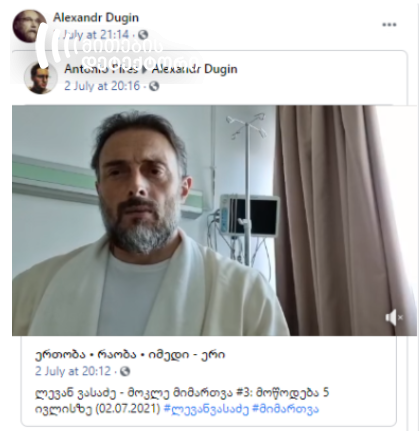 July 6th: The live streams of Dimitri Lortkipanidze, the director of Primakov Georgia-Russia Center and qadageba.ge; The speeches of “Alt-Info” host Zura Makharadze; The video of Russian TV channel РБК with the title: “With sticks and stones. Protesters against the gay parade;” The picture taken by the violent groups at Rustaveli Ave followed by one of the supporters comment:

“Cleared from the stinky tents…”

“TV Channels and journalists have broken their noses for the anti-state actions done by them for years now.”

“They have shown to the Soros-funded NGOs that no matter how much money they receive, it’s all wasted, and their resources have been destroyed.”

July 7th: The port of “Alt-Information” regarding the vandalic destruction of the EU flag was shared by Dugin, adding the following comment: “Georgia I admire.” 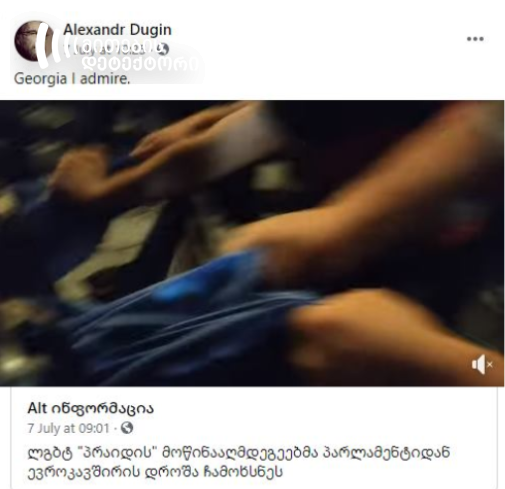 On July 7th, Dugin also shared the footages of the forceful intrusion into the offices of “Tbilisi Pride ” and “Sirtskhvilia” and the destruction of the LGBT+ flag. He also shared the livestream of Dimitri Lortkipanidze, showcasing the demonstration held against the silent protest of July 6th and the posts of various supporters of the violent counter-demonstration.

July 8th: The post of Giorgi Kopadze, which indicated the bank account details of Zura Makharadze to help the persons arrested for violent actions on July 5th. 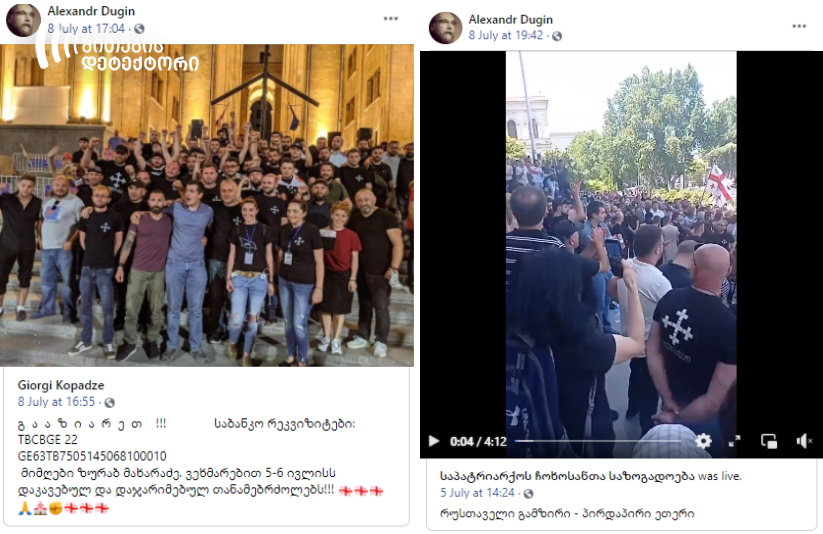 July 9th:  The picture and the livestream of the members and supporters of “Alt-Info” from the counter-demonstration.

July 10th: 2014 video of “Alt-Info” host Zura Makharadze, where he recalls how he learned anger management after being bullied during childhood.

July 12th: The comment of Dugin and his positive assessment regarding the recent development of events in Georgia, asserting that Georgians are changing the balance in favour of Russia. “Georgians by their heroic action are changing the world balance –touching the scale to our side. I sincerely admire this people.”

On the same day, Dugin has shared a post demonstrating the oppositional protest and physical altercations following July 5th. 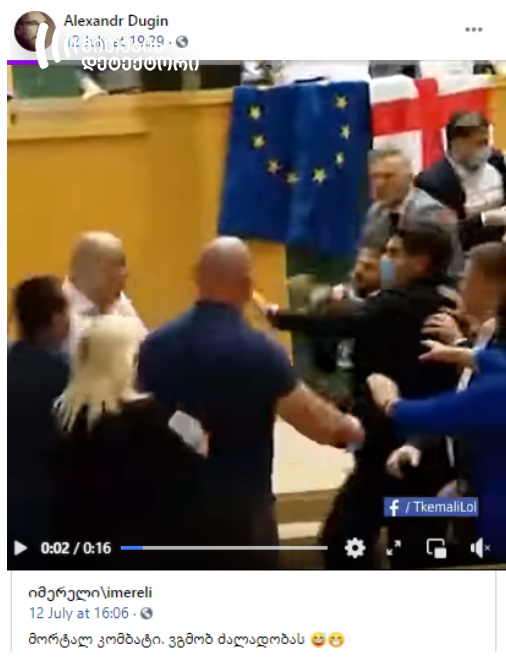 July 17th: Dugin has shared a counter-demonstration-related post of Shota Giorgis Dze Mamulashvili, who happens to be the person who demonstratively burned the EU flag on July 25th, and voiced sentiments about the necessity of an open dialogue with Russia. 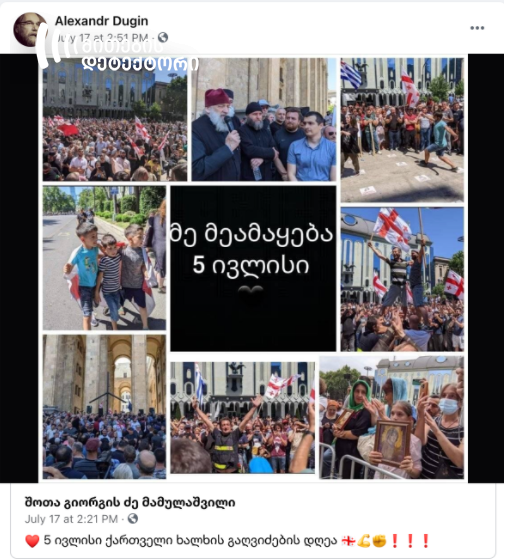 On July 15th, 16th and 17th, Dugin was actively sharing the information regarding the summoning of “Alt-Info’s” hosts and founders to the State Prosecutor’s Office and the assessments of Zura Makharadze in the various media outlets. 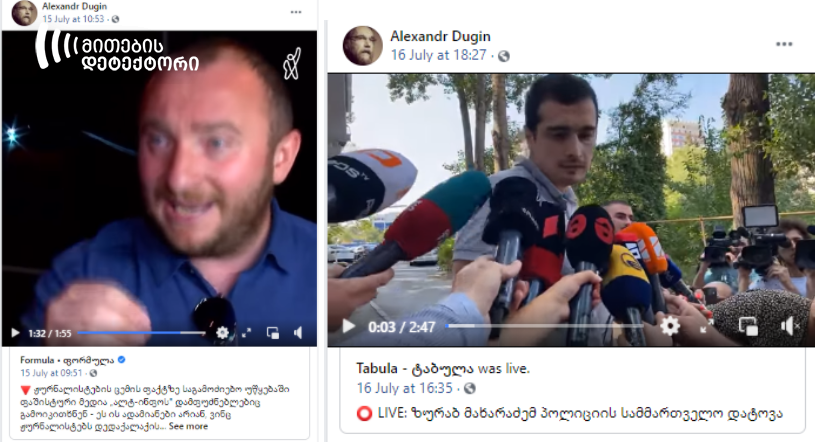 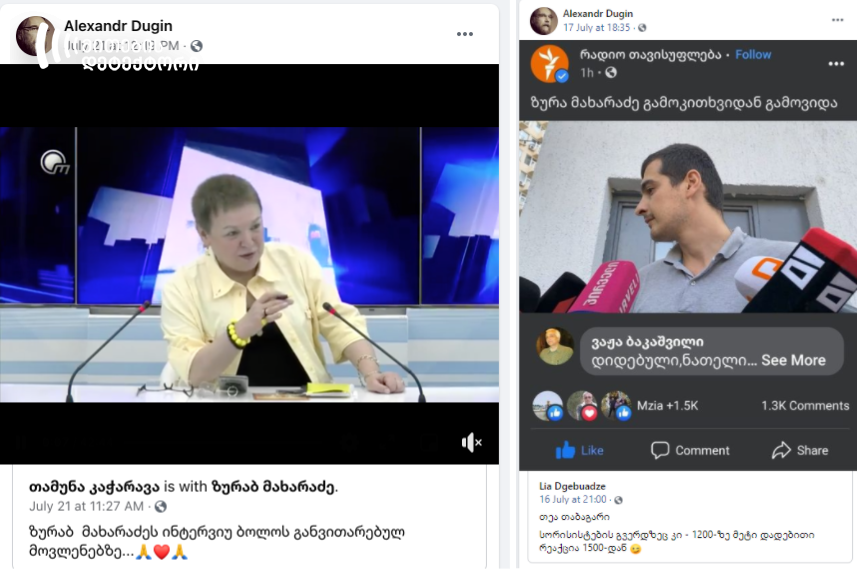 Aleksandr Dugin is the founder of the Eurasia Movement and a far-right philosopher.  Eurasianism of Dugin advocates Russia’s expansion, its primary spiritual and political role on the Eurasian continent and is based on the orthodox vision of Russia.  In 2015-2016, Dugin served as the editor-in-chief of Tsargrad TV, a Russian conservative information analytical TV channel launched in 2015 by Russian oligarch Konstantin Malofeev, who supports the idea of restoring the Russian Empire.

Dugin believes that the Eurasian continent must be a sort of federation of countries under the leadership of Russia. Potential allies of the Eurasian project, in Dugin’s view, are white nationalists since they have traditionalist views. Because of his involvement in the Crimean conflict and actions against the sovereignty and territorial integrity of Ukraine, the US put the philosopher on the list of sanctioned persons. It is worth mentioning that Dugin actively supports the independence of Abkhazia and South Ossetia. On August 8th, 2008, during the interview with the Russian radio “Echo Moskvi,” Dugin proclaimed that Georgians were pursuing genocide against the Ossetian people. Later in 2010, he stressed that Georgia should not have the illusion of returning the lost territories. According to him, deepened ties with Russia are essential for Georgia not to lose any more territories.

Aleksandr Dugin has ties with the World Congress of Families (WCF). The WCF representative in Georgia, Levan Vasadze, does not deny his relationship with Dugin and also declares that he changed Dugin’s mind about Georgia.

It is worth mentioning that apart from actively sharing footages of Far-right and pro-Kremlin groups, including the posts of Levan Vasadze and “Alt-Info,” Dugin has even appeared in the programs of “Alt-Info,” where he voiced the Kremlin strategy towards Georgia. His posts were sponsored on the Facebook page of “ALT TV.” 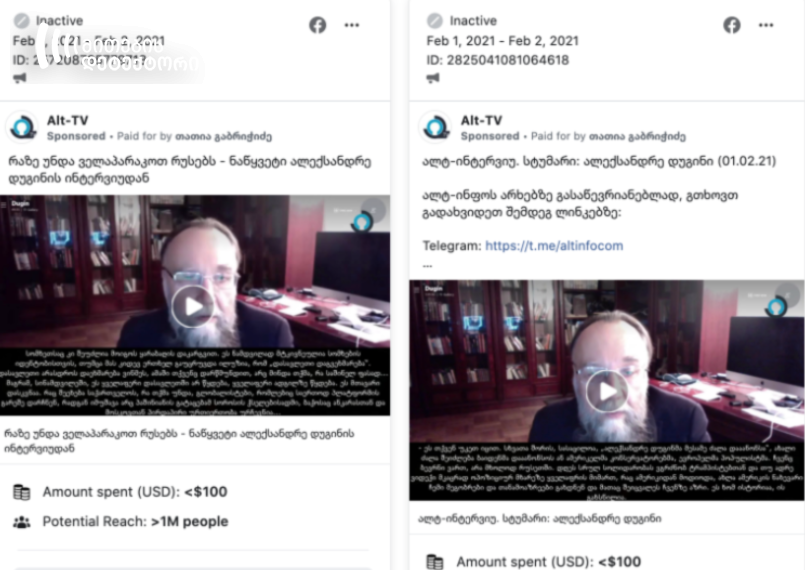