10 Messages of the Anti-Vaxxers Against Ukraine and Zelemskyy 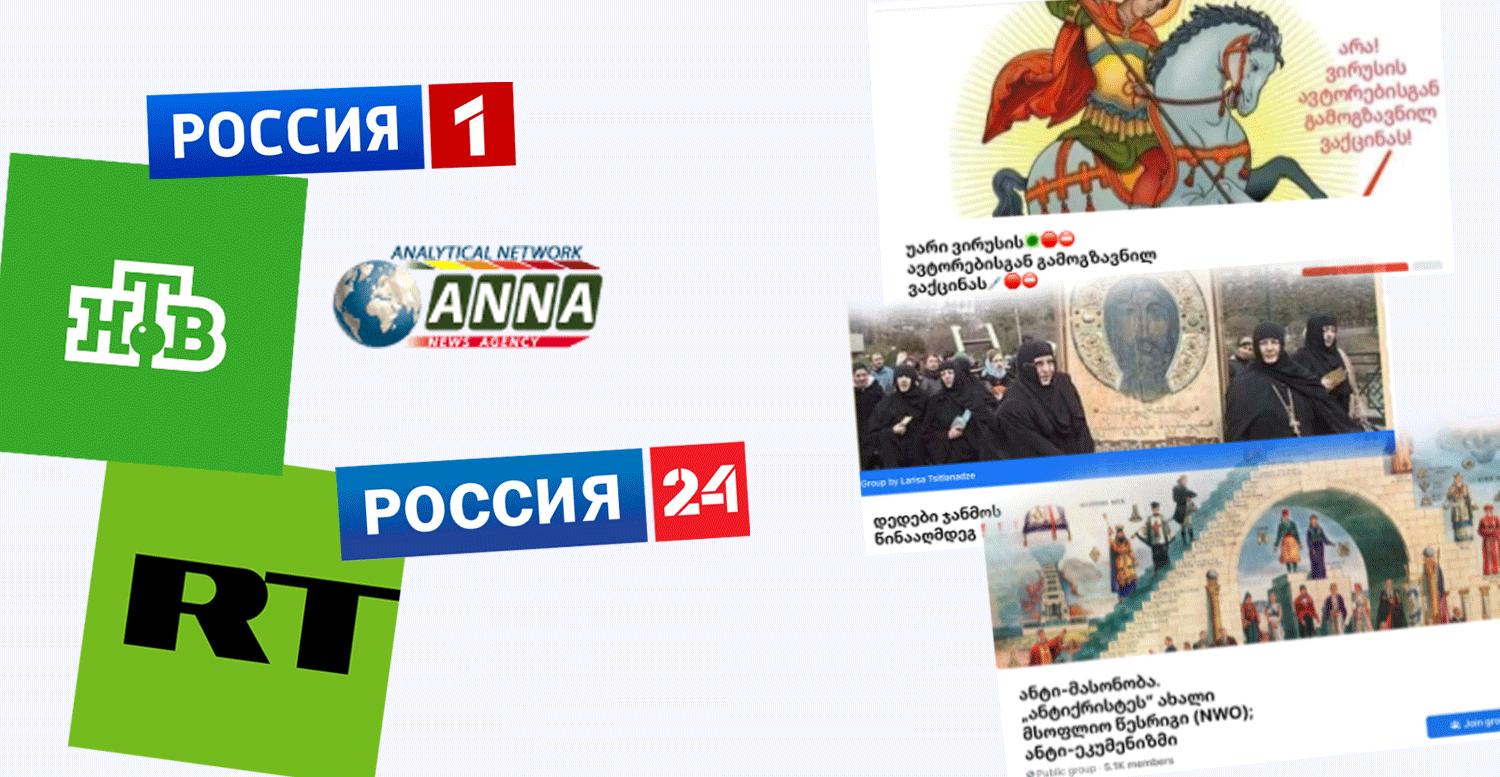 Following the end of February 2022, the Russia-Ukraine war became the new focus of Georgian anti-vaxxers as they started disseminating Russian-backed conspiracy theories and disinformation. Facebook accounts that oppose vaccination, on the one hand, seek to justify Russian military intervention in Ukraine, presenting the war as an operation to free Ukraine of nationalists and perversion, and on the other hand, they claim that the Russia-Ukraine war is part of new world order and represents the next stage of the pandemic. In addition, Georgian anti-vaxxers claim that the Ukrainian President is a Khazar Jew with the goal to create a “heavenly Jerusalem.” The accounts of anti-vaxxers, which were previously sceptical about the Covid-19 vaccines, have now shifted to discrediting Ukrainians and Ukrainian President Volodymyr Zelenskyy, trying to convey the idea that Ukraine is being punished for perversion and sin.

“Myth Detector” studied the Facebook accounts that had been circulating disinformation about coronavirus since the emergence of the Covid-19 pandemic and now focus on the Russia-Ukraine war over the past four weeks. The review also lists the Facebook groups where the anti-vaxxers share their contents and the Russian propaganda media outlets used as sources of these claims.

Between February 24th – March 25th, the following messages have been identified:

The Russia-Ukraine war is part of the “New World Order”

Conspiracy theories that the world is ruled by secret powers aimed to establish a “new world order” through chipping, 5G technology, vaccination and depopulation, appeared on Georgian social networks after the onset of the pandemic. On February 24th, after Russia launched a full-scale military operation on the Ukrainian territory, conspiracy theorists presented the war, similar to the pandemic, as another preplanned step towards the establishment of the “new world order.”

Part of the Georgian anti-vaxxers (Shore Shanidze, Lasha Menteshashvili, Gocha Chumashvili, Lasha Modebadze) believes that the Russian intervention in Ukraine is a part of the “New World Order,” which, on the one hand, entails the decrease in the population size, and the redistribution of the world on the other. According to Shore Shanidze, there is a common belief that Putin is “fighting against the globalists,“ while Lasha Menteshashvili asserts that Russia confronted the “inevitable” inception of the dystopian future. 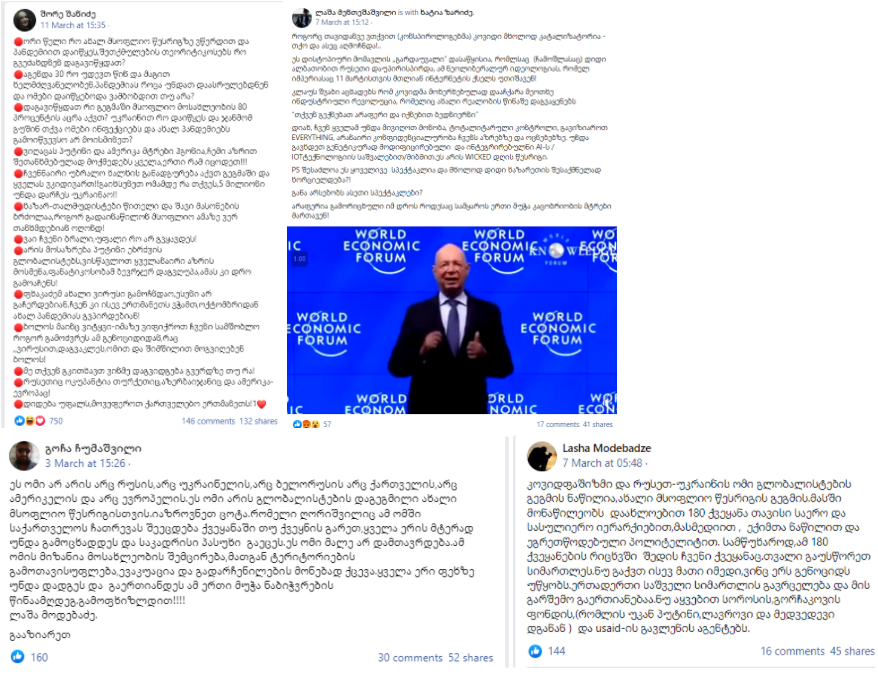 According to Dato Salukvadze, war, pandemics, and economic crises are the preconditions for forming a world government and represent the paths to transferring into the new world order. As an argument that the war serves to establish a “new world order”, “Bolo Zhamis Kristianebi” [Christians of the Last Advent] published a video of a member of the Ukrainian Rada, who mentions the “new world order” in an interview. 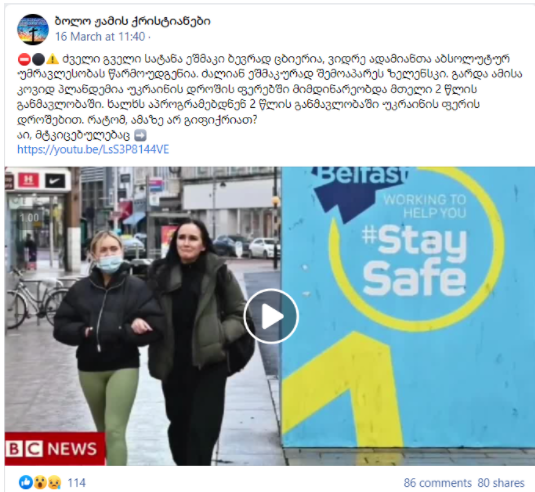 Koba Kuprashvili believes that the Ukrainians are playing the role of a “scapegoat” for the globalists who “will use the war to accomplish things that were not achieved using the vaccines.” According to Kuprashvili, Putin is also “playing the game of globalists”, which entails collapsing economies and establishing a new world dictatorial order. 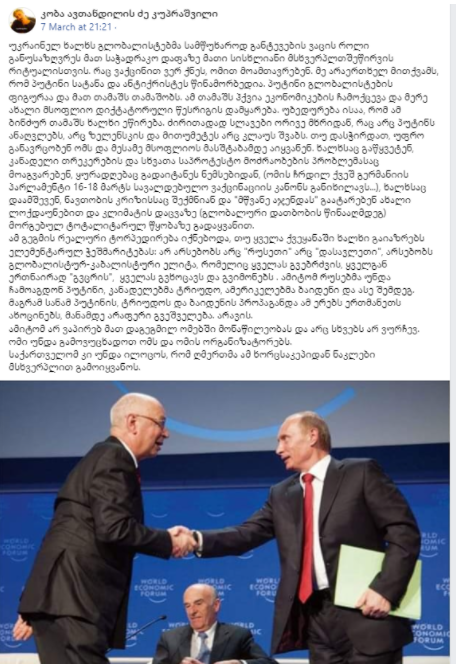 According to several religious-themed accounts, Zelenskyy is a Khazar Jew who seeks to establish a Jewish order in Ukraine, and in 2029 a Jewish state – The Heavenly Jerusalem –  is to be established in the southern region of Ukraine. The same accounts claim that the “V” mark on military equipment indicates the five regions of Ukraine where Khazar Jews are building a new Jerusalem. According to Dato Salukvadze, the fact that Zelenski serves the Khazars is also confirmed by his gestures, making it clear that “all the roads lead to the creation of the Kingdom of Israel.” 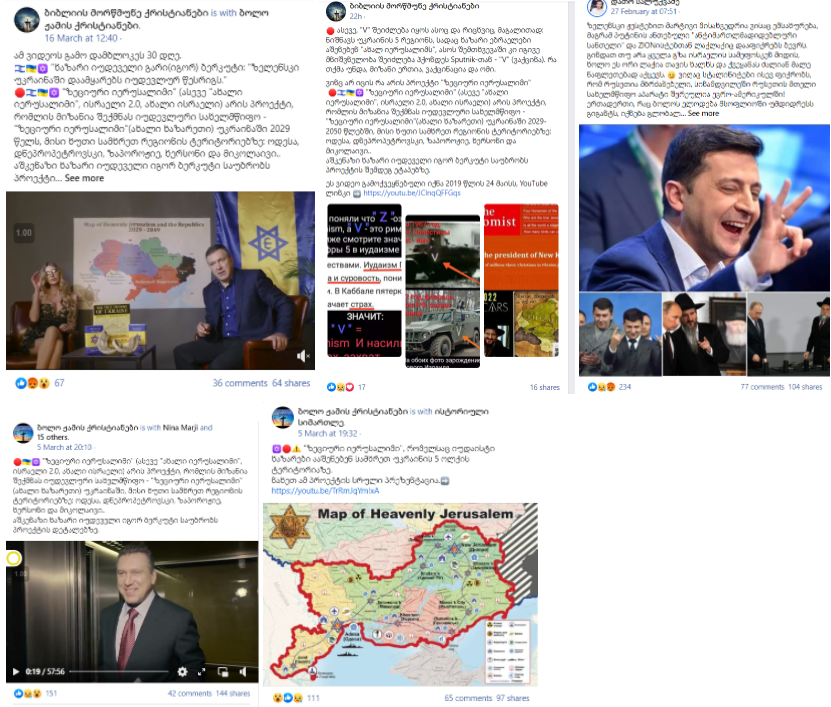 The religious account “Bolo Zhamis Kristianebi” also notes that Khazar Jews pursue the genocide of the Slavic people, while Koba Kuprashvili cited the Georgian poet Shota Nishanianidze, who refers to Khazars in his poem “Ninotsmindis Ghame.” 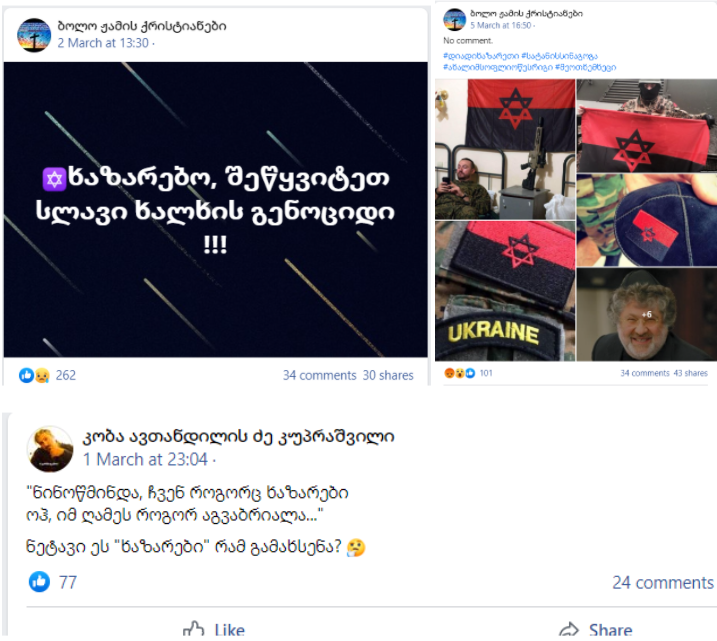 For more on anti-semitic conspiracies about Zelenskyy, see the material prepared by the “Myth Detector:” 2 Anti-Semitic Conspiracies Along with the Fabricated Photo of Zelenskyy

Part of the anti-vaxxer Facebook accounts (1, 2) claimed that Ukraine is not an idependent country, but a periphery of Russia (У – КРАЙ – НА, КРАЙ – coast in Russian). The same Facebook accounts published a map of Ukraine, according to which the territory of original Ukraine was relatively small, and most of the territories were given to it by the Russian Empire and later by the Soviet Union. 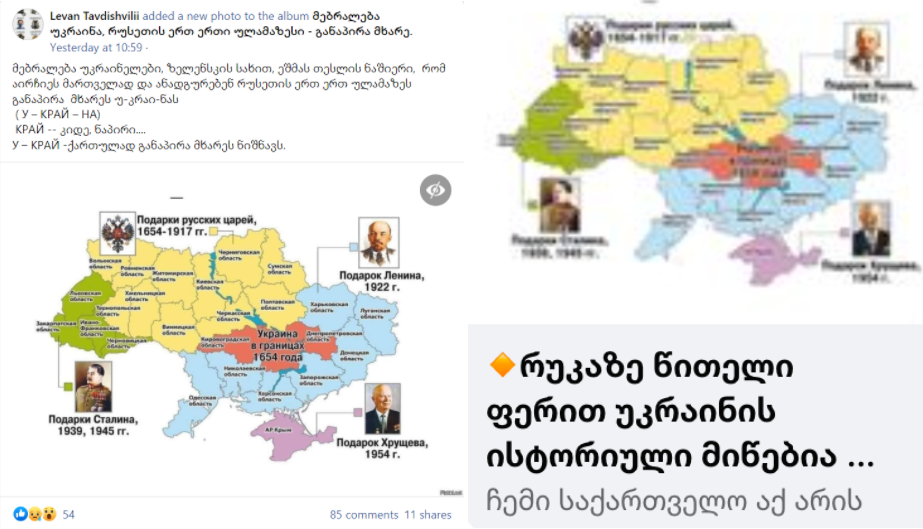 A similar claim that modern Ukraine was created by Russia and mainly by Lenin was voiced by Russian President Vladimir Putin during his speech on the Ukraine conflict.

Some anti-vaxxers (Nina Marji, Gvan Ca, Let’s Defeat Covid-19 Together, Beka Vardosanidze’s Blog, Fantina) have been disseminating the information about the existence of American bio-laboratories in Ukraine and Georgia, claiming that these laboratories are were engaged in illegal and prohibited activities. Some of them  (Gvan Ca, Lasha Modebadze) also tried to instil fears into the Georgian population about the alleged Russian threat to bomb Georgia over the Lugar Lab. 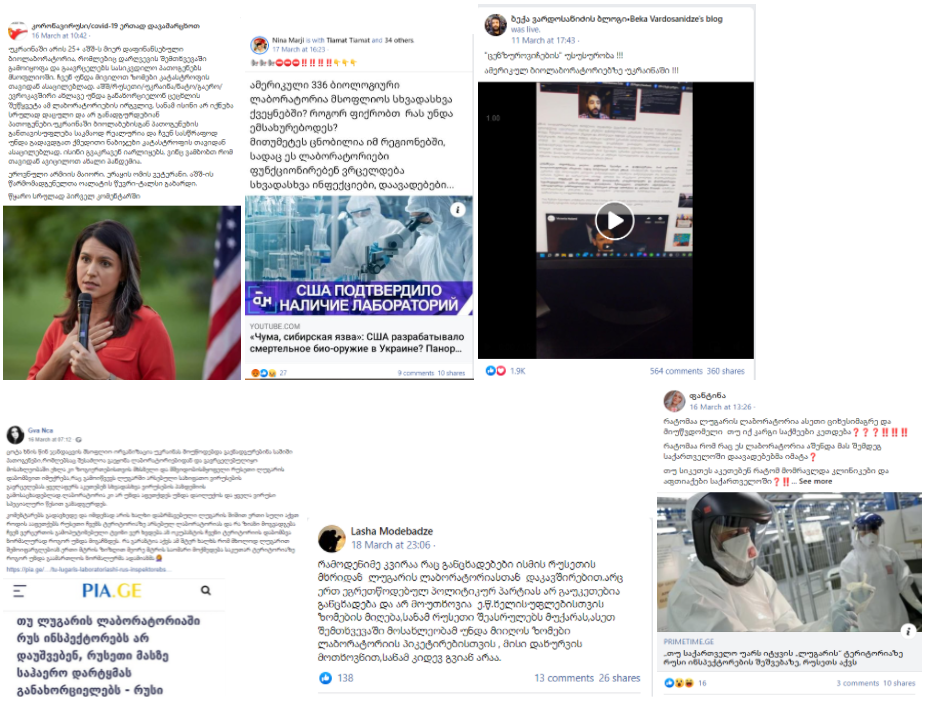 For more on why the Kremlin’s allegations about Lugar Lab are groundless, see the materials of Myth Detector.

Ukraine uses its own population as human shields

Several anti-vaxxer accounts (Sulieri Samkaro, [Spiritual World] Nina Marji, Lilu Lilu, Nona Agdgomeleshvili, Fantina) have been disseminating the information that the Ukrainian army does not spare its own people, destroying civilian vehicles and infrastructure and shooting people on the street for violating the curfew. Similar videos were also published on Russian propaganda channels, accusing Ukrainian nationalists of sacrificing the population and using them as human shields. 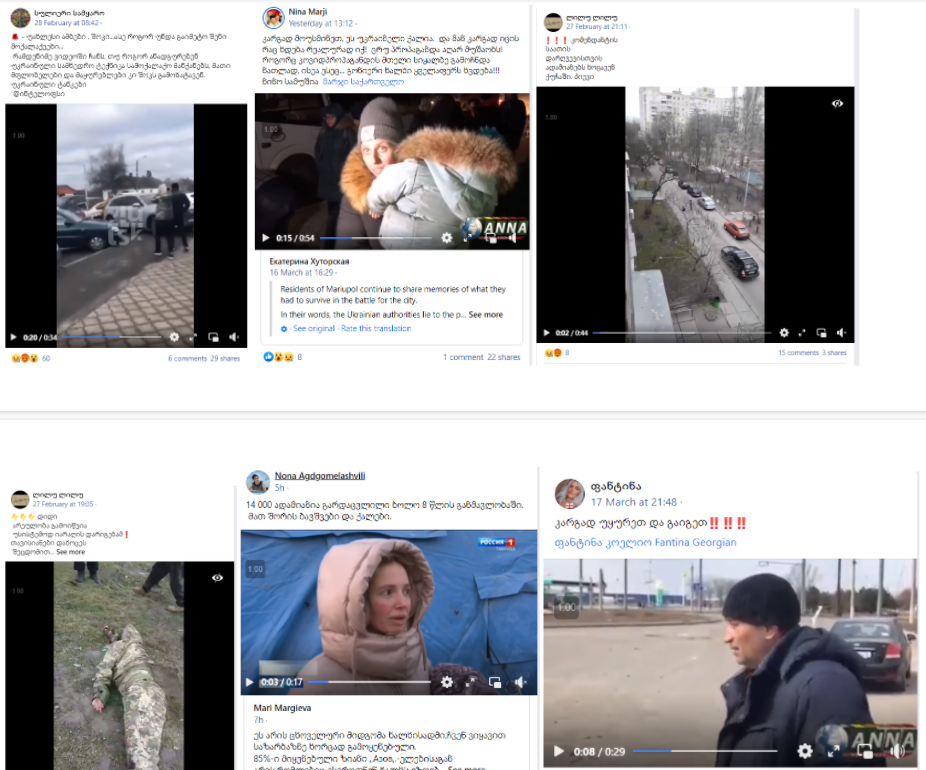 Ukrainian refugees in Europe behave in an uncivilized way

Anti-Vaxxers (Sulieri Samkaro, [Spiritual World], Lilu Lilu ) have also released a video to discredit the Ukrainian refugees, which allegedly depicted the unrest caused by the Ukrainians in Europe. 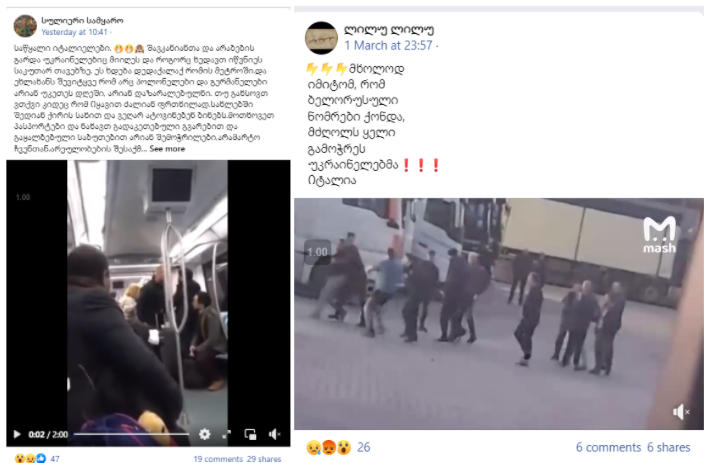 In their search for the cause of the war, anti-vaxxers also emphasized the depraved lifestyle of the Ukrainians and their pursuit of fascism. According to some of them, Nazism in Ukraine is entrenched to the extent that they would soon even want to conquer the world, and so they had to be stopped by someone, and in this case, by Russia. Mano Beridze and Nona Agdgomelashvili published a video as an argument for the revival of fascism in Ukraine, in which children shout “Glory to Ukraine” and “Glory to the Nation”. In addition, Khatuna Saginashvili – the editor of Kvakutkhedi Magazine, and the Facebook user Fantina suggested that the war in Ukraine was triggered by LGBT prides and propaganda of perversion.

The posts are part of a large-scale conspiracy aiming to shift the responsibility away from Russia with the argument that Ukraine is being punished for its sins.

For more on the issue, see: Divine Punishment or a Performance in Support of “Pussy Riot”?

The West, Zelenskyy and the United National Movement want to drag Georgia into the war

The followers of the conspiracy (Nona Agdgomelashvili, Nina Marji, Gvan Ca, EMI Group) believe that the West, Zelenskyy and the United National Movement want to drag Georgia into war, for which they first planned a provocation and then the return of the UNM to power.

Part of the anti-vaxxers (Shore Shanidze, Lasha Menteshashvili, Fantina) claims that Zelenskyy is the President of the lost war and does not deserve world recognition and support.

Shore Shanidze “What did this man do that the whole world applauds him standing up? Has the president of the lost war been idolized like this before?”

According to Lasha Menteshashvili and Khatuna Saginashvili, Zelenskyy sacrificed his own people.

Zelenskyy is a homosexual and a drug addict

In order to discredit the (Gvan Ca, Nika Koberidze, Fantina) President of Ukraine, anti-vaxxers have been sharing materials that would allegedly prove that Zelenskyy was a homosexual and a drug addict. The materials included an altered video, the authenticity of which was examined by “Myth Detector:”

The fabricated video, which claimed that Zelenskyy was a drug addict was fact-checked by “Myth Detector:” Coffee, Drugs or Sport – What did Zelenskyy Talk about?

Sources and Information Channels of Anti-Vaxxers

Anti-vaxxers mostly relied on the photo and video materials published by the Russian Telegram channels and shared the articles of the Russian propaganda media channels such as Roccия24,  Roccия1, НТВ, anna-news.info, RT. 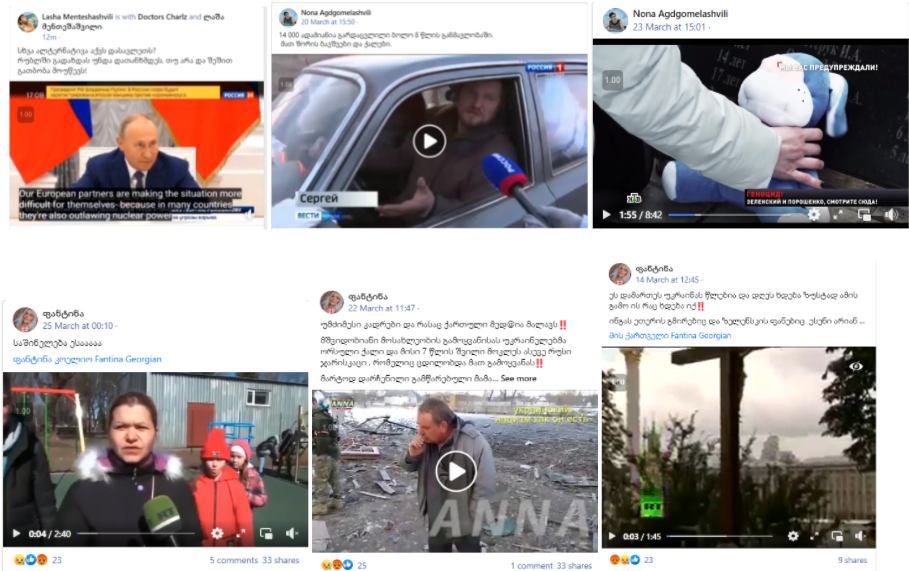 In order to disseminate disinformation and conspiracies about Ukraine, anti-vaxxers have been using their personal accounts and the following anti-vaxx, pro-Kremlin and anti-liberal Facebook groups: