Divine Punishment or a Performance in Support of “Pussy Riot”? 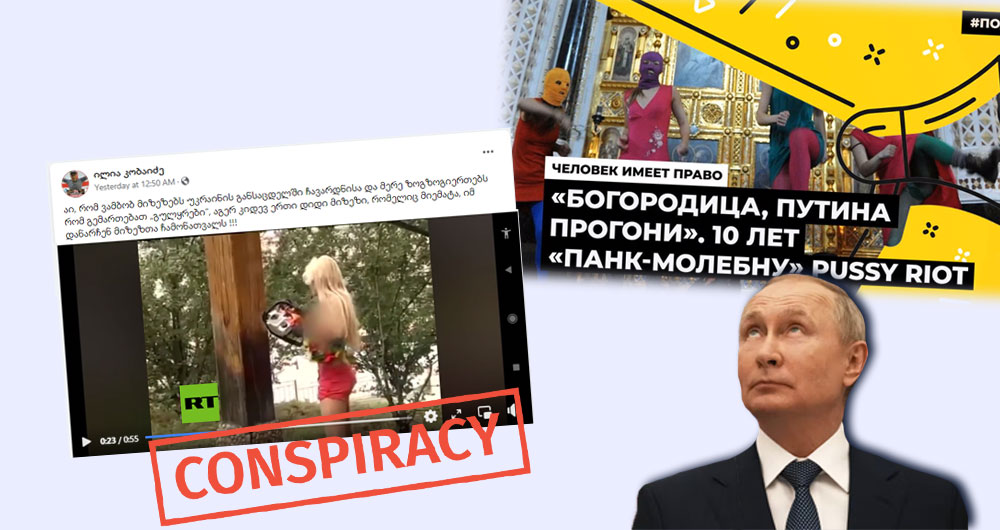 On March 14th, Facebook accounts “Me Tamarashneli Var” and “Ilia Kobaidze” posted a video showing a Ukrainian activist cutting a wooden cross in the city centre with a chainsaw. According to the first post, Orthodox Ukraine is punished for the sins of Sodom and Gomorrah, and for the sin committed by one man, the whole nation is in despair. The post quotes: “When one man sins, he is the one to pay for it; when the state supports the sin, the whole nation has to suffer.”

According to the second post, God punishes Ukraine for insulting the cross. Both posts give the impression that the intrusion of Russian troops into Ukraine results from Ukraine’s denial of Orthodoxy and the destruction of Christian symbols. 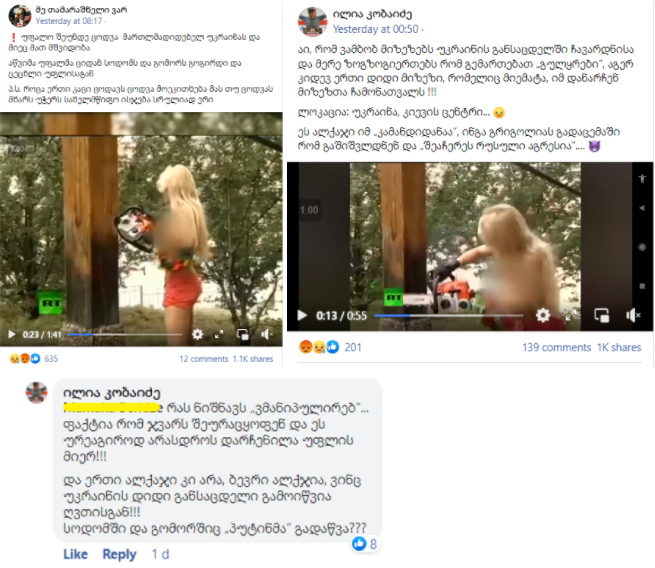 The post is conspiratorial and seeks to shift the responsibility from the Russian military by conveying the idea that Ukraine is being punished for its sins. The video itself circulates without context. It was filmed in 2012 in Kyiv. By cutting a wooden cross, the Ukrainian Feminist Union (Femen) expressed its solidarity to the Russian punk group (Pussy Riot), whose members were sentenced to prison for their 2012 song “Virgin Mary, expel Putin.”

The video disseminated on Georgian social media in the context of the Russia-Ukraine war in March 2022 represents performance in support of the Russian punk group “Pussy Riot,” whose members were arrested in 2012 for singing in one of the churches in Moscow. Pussy Riot’s song “Virgin Mary, expel Putin” was a protest against the Russian Church, which called on Russian citizens to vote for Vladimir Putin in the 2012 presidential elections. Following the arrests of the group members, the Ukrainian feminist group cut the cross – the symbol of the Orthodox Church, “which is stirring the brains of Ukrainian and Russian citizens”- in solidarity with Russian activists.

Reasons behind the arrest of “Pussy Riot” members

In February 2012, the punk group Pussy Riot members entered the Cathedral of the Savior in Moscow and performed a “punk-prayer” with the text “The holy virgin, expel Putin.” 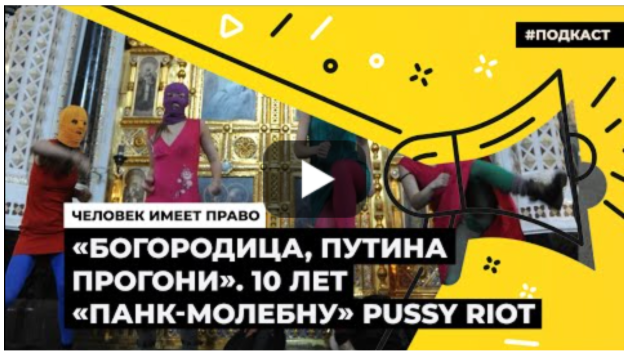 Representatives of the Russian Orthodox Church believed that members of the punk group, as well as media outlets that covered the incident at the Church, had to be punished. Three members of Pussy Riot have been charged with hooliganism and initially face up to seven years in prison. According to one of the members of the group, Nadezhda Tolokonikova, with this act, they reacted to the ongoing processes in the country:

Nadezhda Tolokonikova: “In the song ‘Virgin, expel Putin’, we reflected the reaction of Russian citizens to the Patriarch’s call to vote for Vladimir Putin in the March 4th, 2012 presidential elections.”

The second member of the group, Maria Aliokhina, said that the Russian Church does not love everyone but only the people who believe in Putin.

Maria Aliokhina: “I thought the church loved its children. But it turns out that there are differences here as well: the church loves only those children who believe in Putin.”

In the end, the court sentenced three members of the group to two years in prison for hooliganism and incitement to hatred on religious grounds.

Why did “Femen” Activists Cut the Cross in Kyiv?

On August 17th, 2012, Ukrainian activists of “Femen” cut a wooden cross in Kyiv in solidarity with members of the “Pussy Riot.” In addition, Ukrainian girls offered asylum to Russians in their country and assistance in the fight against the regime. According to the statement issued by “Femen”: “With this act, Femen calls on all the sound forces of society to mercilessly cut out of the brain rotten religious prejudices that serve as a support for the dictatorship and hinder the development of democracy and women’s freedom.”

The Femen statement also noted that the cross erected near the October Palace in memory of the victims of Stalin’s repression was located on the site of the People’s Commissariat of Internal Affairs (NKVD), where the death sentence was carried out before World War II.

In 2012, law enforcement launched a criminal case against “Femen” activists for vandalism, which carries a sentence of up to 4 years in prison.

Notably, Russian civil activists also joined the “Femen” protest and cut four crosses in Chelebyansk and Arkhangelsk districts. With this protest, they wanted to end the ecclesiastical mafia in Russia, which supported the Putin regime and called on citizens to vote for it.

Facebook user “Ilia Kobaidze” is a supporter of the pro-Kremlin “Alt-Info” and their “Conservative Movement” party and participates in the dissemination and promotion of their materials. 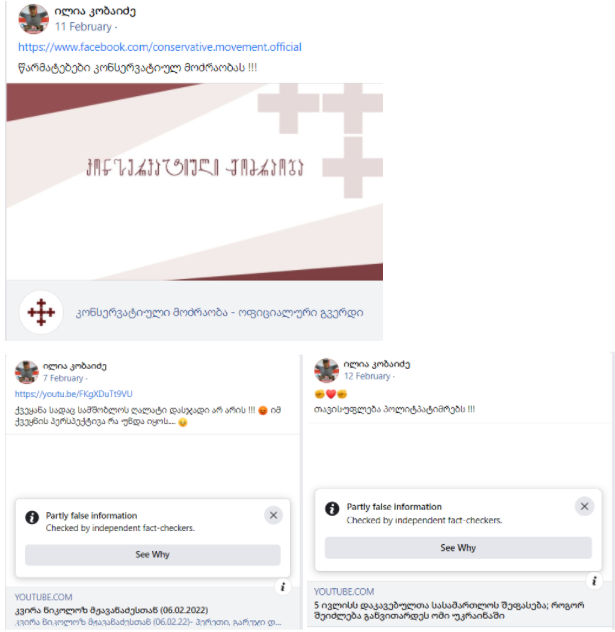 Notably, the photo manipulation disseminated by Ilia Kobaidze, which served to discredit the opposition, was fact-checked by the “Myth Detector” in 2020. Read more: