Zakharova’s Disinformation about Germany’s Biosafety Program – What Research is Being Conducted in Ukraine? 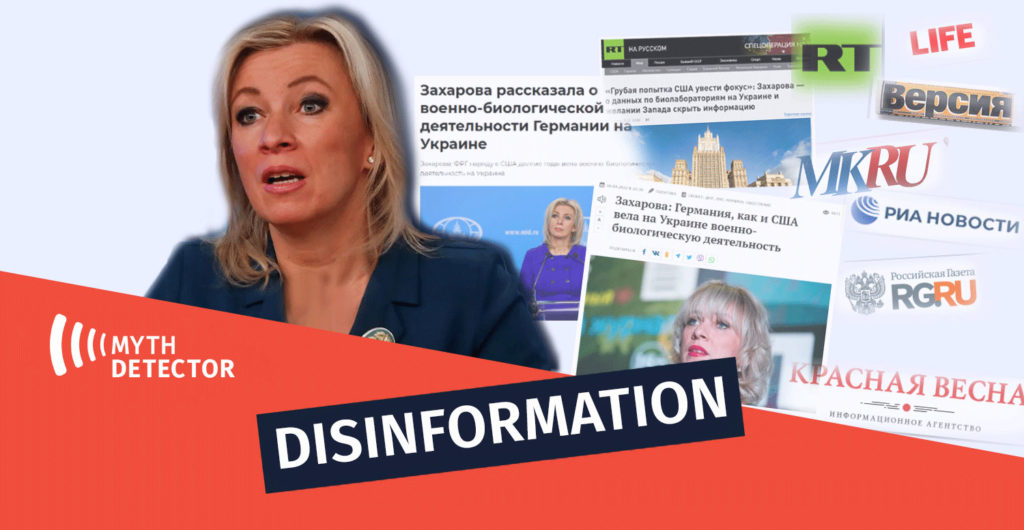 On April 16th, 2022, in an interview with Russia Today, Russian Foreign Ministry spokesperson Maria Zakharova spoke about the “military-biological activities” carried out by Germany in Ukraine over the years. According to Zakharova, 1) Germany carries out “military-biological activities” in Ukraine within the framework of the German biosafety program; 2) Germany cooperates with the 30 US-owned biological laboratories in Ukraine that carry out dangerous biological research; 3) The fact that Germany is engaged in dangerous biological activities is further proved by the fact that German specialists were able to detect “Novichok” in the blood of Alexei Navalny, which proves that they can synthesize this substance themselves.

Zakharova’s interview gave boost to the emergence of articles about the ongoing “military-biological activities” by Germany in Ukraine in the Russian-language media.  Ria Novosti, RG.ru, MK.ru, Versia.ru, Life.ru and Krasnaia Vesna claimed that Germany, along with the US, had been carrying out intensive “military-biological” activities in Ukraine for years. 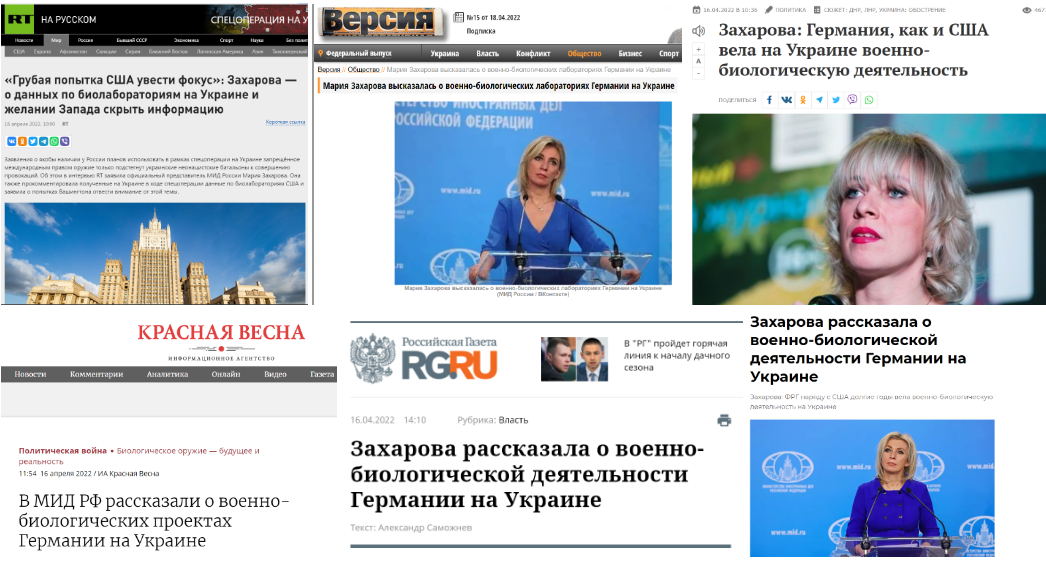 Maria Zakharova voices a number of false and manipulative allegations. In fact, 1) the claim about the existence of 30 US-controlled bio laboratories in Ukraine is disinformation. The United States is assisting public health laboratories in Ukraine in technical terms, and this cooperation does not entail military activities. 2) Projects under the German Biosafety Program in Ukraine are indeed ongoing, although their purpose is not to conduct hazardous biological research, but to enhance biosafety. 3) In addition to Germany, the poisoning of Alexei Navalny with “Novichok” has been confirmed by OPCW, and Swedish and French laboratories.

How does the German Biosafety Program help Ukraine?

The contribution of the German Society for International Cooperation (GIZ) to the German Biosafety Program is an integral part of the program, which aims to strengthen biosafety worldwide. This project also entails German assistance to Ukraine in the field of biosafety. The participating countries are: Morocco, Sudan, Tunisia, Georgia, Kazakhstan and Ukraine.

The main goal of the program is to prevent biological risks, improve the ability to respond to them, and strengthen the cooperation network to raise awareness about the international standard for the consumption of pathogens.

In the interview, Zakharova specifically talks about the cooperation between the Bundeswehr Institute of Microbiology (IMB) and Ukraine, stating that their actions raise suspicions of producing biological weapons. In fact, the German IMB under the German Biosafety Program has been cooperating with the Kharkiv Institute of Experimental and Clinical Veterinary Medicine (IECVM) since 2016. The implementation of the third phase of the cooperation started in 2020, and the Kharkiv National Medical University also became an IMB partner.

Instead of the development of biological weapons, the biosafety project focuses on the following areas:

Notably, the information on the activities carried out within the framework of cooperation between the German IMB and Ukrainian institutions by years (2016, 2017, 2018, 2019, 2020, 2021, 2022) is openly and transparently available. Activities include training of young scientists, papers presented at various symposia and conferences, field practices, etc.

Importantly, Germany and Ukraine are signatories to the Biological Weapons Convention (BWC), which means that they refuse to develop and use biological weapons. At the same time, there is no laboratory of the highest level of biosafety (BSL4) on the territory of Ukraine, which would make it impossible to develop biological weapons.

Noteworthy that Germany has also cooperated with Russia in the field of biosafety in the past. In 2002, a USD 20 billion project was launched in partnership with the G8 countries (Russia was then a G8 member) in the fight against the proliferation of weapons of mass destruction. The target country of the project was originally Russia, and its purpose was to ensure Russia’s security from the threat of counterterrorism and nuclear weapons. Later, the project expanded to other countries as well. Germany was involved in the project as well, and the amount of financial assistance provided by it amounted to USD 1.5 billion.

Zakharova further argued that Germany is cooperating with a network of 30 Ukrainian laboratories controlled by the United States that conduct dangerous biological studies experiments. In fact, the information about the existence of 30 US-controlled laboratories on the territory of Ukraine is disinformation, which has been actively disseminated by the Russian side since the emergence of the Russia-Ukraine war. Kremlin propaganda has accused the United States and Ukraine of developing biological weapons. In fact, since 2005, the US Department of Defense has been assisting the Ukrainian government in strengthening its public health laboratories in technical terms, although the program does not entail working on military biological projects.

For more on the topic, see the previous articles prepared by the “Myth Detector:”

Where did Novichok originate from and who confirmed Navalny’s poisoning with the substance?

According to Zakharova, the fact that the Germans are well versed in biological weapons is also confirmed by the case of Russian opposition leader Alexei Navalny, as German specialists soon confirmed the existence of “Novichok” in his blood, which Zakharova said means that the Germans could synthesize these substances themselves. In fact, Novichok is not a biological but a chemical weapon, and it was added to the list of banned chemicals in 2019 at the initiative of the US, the Netherlands and Canada in the UK after the poisoning of former Russian agent Sergei Skripal and his daughter Yulia. Russia has been hiding the existence of the substance for years, its existence was confirmed in 1992, when it became known that a Russian scientist was arrested in for revealing a state secret to “Moscow Novosti.”

As for Navalny’s poisoning with Novichok, Russian opposition leader Alexei Navalny became ill on the Tomsky-Moscow flight on August 20th, 2020 and fell into a coma. 2 days later, he was taken to a German hospital. 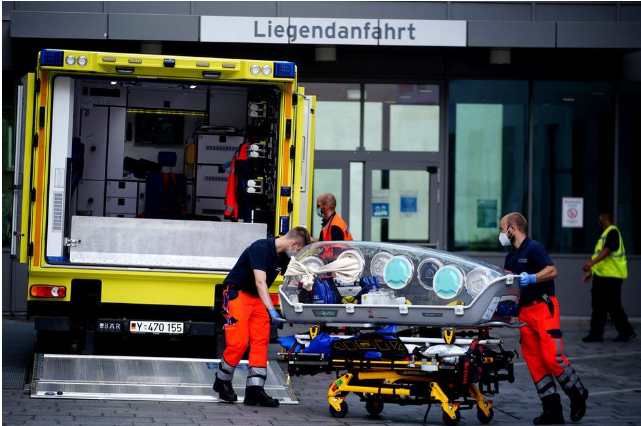 In addition to Germany, Navalny’s poisoning with Novichok has also been confirmed by French and Swedish laboratories. The poisoning was also confirmed by the Organization for the Prohibition of Chemical Weapons (OPCW). According to the OPCW, a new type of Novichok was used to poison Navalny, which was not included in the list of substances banned by the organization.

The involvement of the Russian Federal Security Service (FSS) in the poisoning of Navalny was confirmed by the international investigative group of journalists Bellingcat. On December 21st, Alexei Navalny called FSS agent Konstantin Kudryavtsev posing as Russian Security Council Secretary Nikolai Patrushev. In a telephone conversation, Kudryavtsev admitted the attempt to poison Navalny with Novichok and the reasons why the operation failed.