Why did the Verkhovna Rada of Ukraine Dismiss the Ukrainian Ombudsman in a No-confidence Vote? 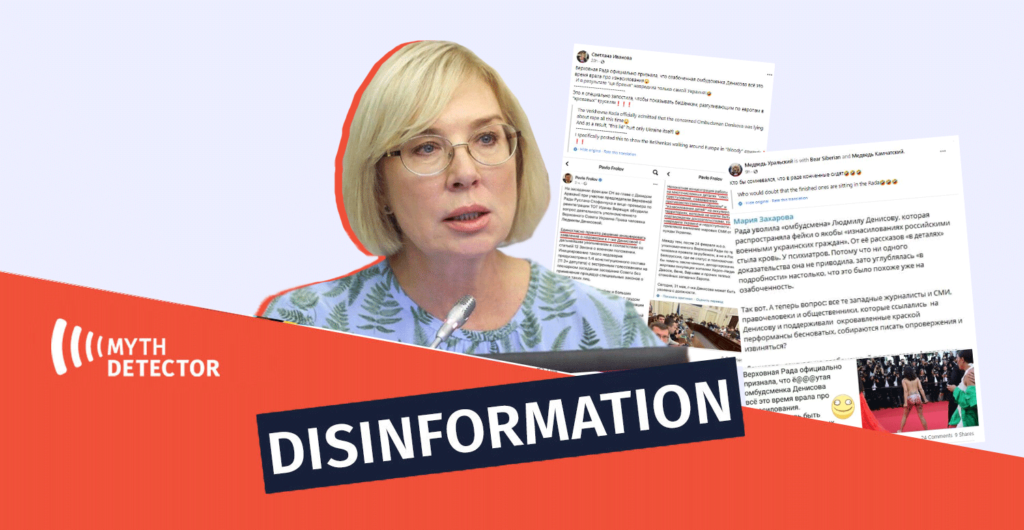 On May 31st, Facebook user Светлана Иванова published a post stating that the Verkhovna Rada of Ukraine had officially acknowledged that Ukrainian ombudsman Lyudmyla Denisova had lied about the mass rape in Ukraine during the war. Attached to the post is a screenshot of a post by Ukrainian Rada MP Pavlo Frolov highlighting the part in which the Rada expresses distrust in Denisova, citing Denisova’s incomprehensible concentration on degenerate forms of sexual violence, including child abuse, which could not be substantiated with evidence that diverted attention from Ukraine’s actual needs.

On June 1st, a similar post was published on the Facebook page Медведь Уральский. The post is accompanied by a screenshot stating that the Verkhovna Rada has officially acknowledged that the Ombudsman lied about sexual violence. 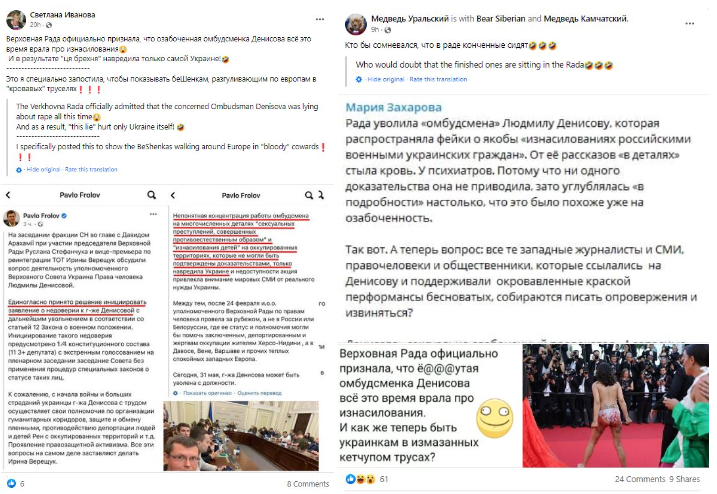 On the same day, Facebook user Stanislav Salostej posted an identical screenshot on his Facebook page, while the user Конченный Убивец published it in the group Новости Эстонии.

In fact, members of the Verkhovna Rada cited several reasons for the vote of no confidence in the Ukrainian Ombudsman, including complaints about Denisova’s activities, leaks of sensitive information, her overseas presence, low involvement in organizing humanitarian corridors, and her claims about the smuggling of prisoners and trafficking, which she could not substantiate with evidence. The information that Denisova lied about the facts of sexual violence committed by Russian forces in Ukraine, and hence, the claim that such facts did not occur in Ukraine is false. Numerous cases of sexual violence by Russian soldiers are confirmed by the stories of the victims, as well as documents obtained by international organizations.

The Ombudsman of Ukraine, Lyudmyla Denisova, was dismissed by a no-confidence vote by the country’s parliament on May 31st. 234 MPs voted for her dismissal, while nine were against it.

Denis Maslov, a member of parliament from the People’s Servant party, explained the reasons for the vote of no confidence, stating that the Ombudsman’s office had received a number of complaints. He also spoke about the leak of sensitive information from the Ombudsman’s office, which harmed the interests of citizens and the country.

“It is worth recalling the case when it was reported on social networks that in the Kherson region, 57 of our orphans were hiding in churches. This information was immediately used by the Russian special services, and these children were quickly taken to the territory of the Russian Federation”- noted Maslov.

Maslov also noted that his colleagues often complained about communication with the Ombudsman’s office.

As for the post of MP Pavlo Frolov, it also explains the reasons for the vote of no confidence against Denisova. Frolov names several reasons, stressing that Denisova did not use her authority to provide humanitarian corridors and exchange prisoners or to protect them, and did not do enough to prevent Ukrainian citizens, including children, from being deported from the occupied territories to Russia. Frolov noted that Ombudsman’s responsibilities had to be fulfilled by the Minister of Reintegration of the temporarily occupied territories, Iryna Vereshchuk. Another reason for Denisova’s dismissal, Frolov said, was that she had spent a lot of time abroad after Russia’s full-scale military aggression on February 24th:

“However, not in Russia or Belarus, where her authority could have helped the prisoners and the deported citizens.”

Another reason given by Frolov, which is highlighted in Russian-language posts, is that Denisova failed to gather enough evidence, and in this context, particularly on the issue of degenerate sexual violence in the occupied territories, which diverted attention from other issues. However, the post does not say that such facts did not happen and therefore, the assertion that the Rada officially acknowledged that Denisova was lying and that similar facts did not take place in Ukraine is false. 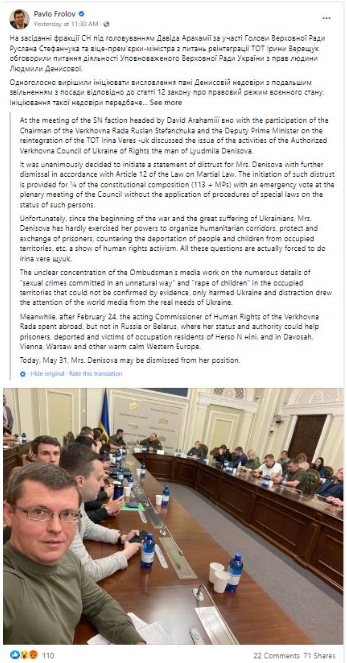 More than 11,000 war crimes committed by Russian forces are currently being investigated in Ukraine. Eyewitness accounts are also being collected in Poland, where more than 1,000 testimonies have already been collected about war crimes, including rape cases. French and Lithuanian experts, as well as a 42-member team of experts from the International Criminal Court, are involved in the investigation in Ukraine.

Some of the victims also spoke to the media about the rape cases by Russian soldiers. The BBC, the  New York Times, The Times and  Meduza have all published the stories of the victims.

In the first two weeks of April alone, the Ombudsman’s office received reports of 400 cases of sexual assault committed by Russian soldiers. The UN mission in the Kyiv region has reported at least 75 cases of sexual abuse of Ukrainians, including children, by the Russian military since February 24th. According to Kateryna Cherepakha, president of the charity La Strada Ukraine, they received numerous calls from women who reported sexual assault and asked for help, although it was physically impossible to reach them due to the ongoing conflict. The organization helps victims of trafficking and domestic and sexual violence. They believe this is just the tip of the iceberg, and there have been many more cases of sexual crime amid the war.

The Human Rights Watch has documented a number of cases in which Russian forces committed war crimes against civilians in occupied Chernihiv, Kharkiv, and the Kyiv region, including rape and murder.

According to Ukrainian doctors participating in an autopsy of victims found in the Kyiv region, they found evidence of the fact that part of the women was raped by Russian soldiers before being killed.

Ukrainian prosecutors have already charged a Russian soldier with the murder of a Ukrainian man and the rape of his wife.

The Russian side denies the facts of sexual violence by members of the occupation forces, as well as other war crimes, of which numerous pieces of evidence have become public. The Kremlin propaganda media and pro-Russian accounts also denied the war crimes committed in Bucha. Read more on the topic in the articles of the “Myth Detector:”