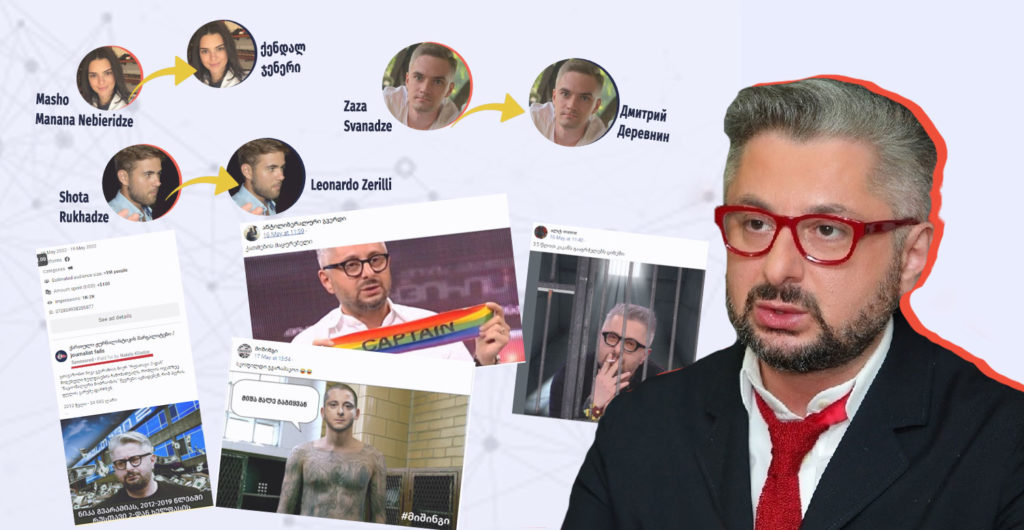 On May 16th, the Tbilisi City Court convicted Nika Gvaramia, General Director of the Mtavari Arkhi, of causing damage to Rustavi 2 and sentenced him to 3.5 years in prison. While Gvaramia’s arrest was harshly criticized by the media, and local and international NGOs, a campaign aimed to discredit Gvariamia and the journalists of the Mtavari Arkhi emerged on social media, which included pro-governmental, anti-opposition, anti-liberal Facebook pages and fake accounts. These actors criticized Gvaramia, his team and the “United National Movement” on the one hand, and considered the court decision as an expression of the rule of law, on the other. At the same time, posts and illustrations aimed to discredit Nika Gvaramia and other journalists of Mtavari Arkhi were published by the Georgian Dream-affiliated and anti-opposition Facebook pages. Notably, some of these posts were sponsored. To discredit Gvaramia, an altered photo from 2021 with a homophobic context, which the “Myth Detector” marked as false as part of the Facebook fact-checking program, was being disseminated once again. 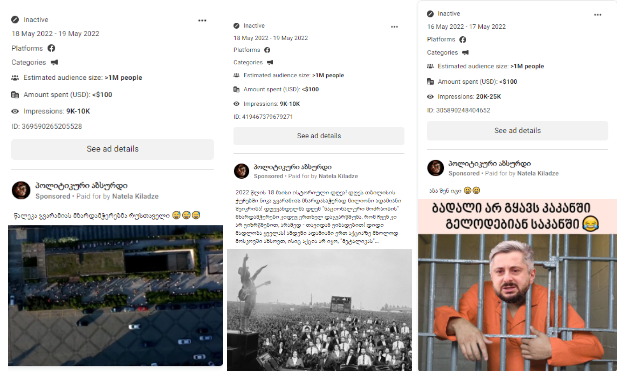 Natela Kiladze has also spent money on sponsoring the content of ‘Journalist fails’, where, as of May 20th, two posts about Gvaramia have been sponsored, including a list of salaries received by Nika Gvaramia from Rustavi 2 and information about the arrest of the director of Mtavari Arkhi. 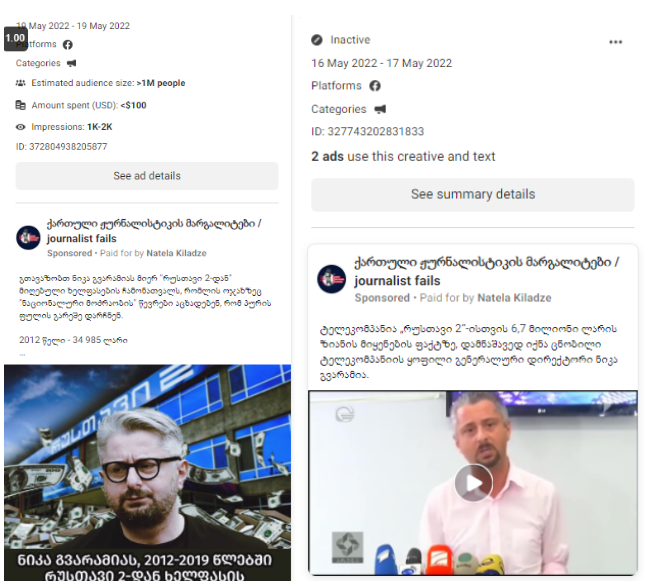 Posts published on the Facebook page archive, which combine statements made by Nika Gvaramia at different times, are also sponsored. 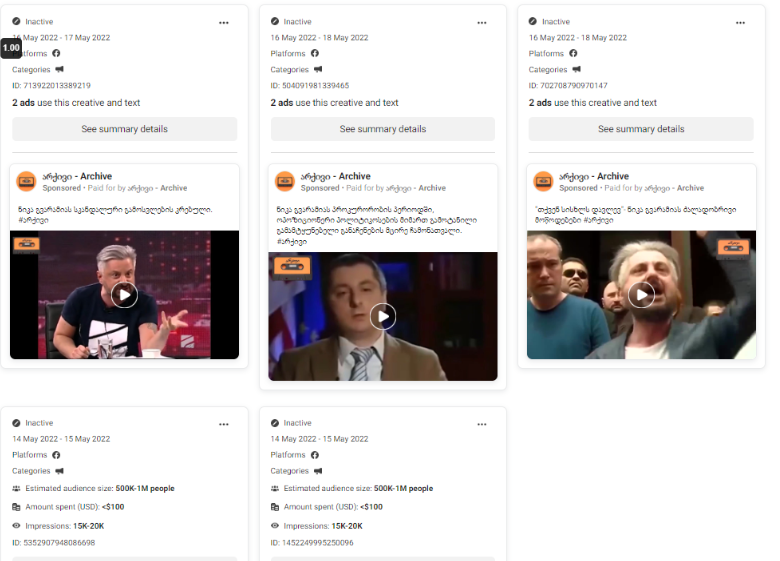 Notably, the post about the salaries of Nika Gvaramia was also published by “Leader 41” – a Facebook page supportive of the incumbent Georgian Dream party. 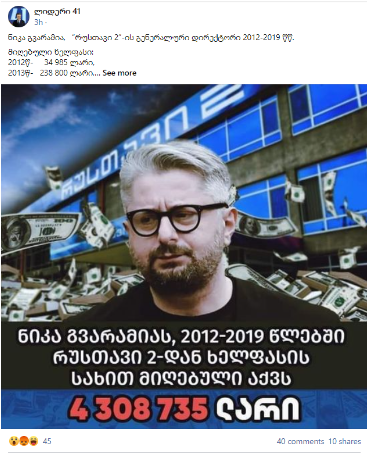 Information about Gvaramia’s salaries was published by the Facebook user Varlam Gorgodze in the private Facebook group of the information agency Spacesnews. Notably, the URL link of  Varlam Gorgodze’s account indicates the name ‘vaka.gorgiladze’ and together with “Konstantine Chikvialdze” manages the group.

The group split.spnews.io, which is a subdomain of spnews.io, also features the materials of the pro-Kremlin outlet “Newsfront.”

After the arrest of Nika Gvaramia, anti-liberal (Sarkrazmelebi, Conservative Women, Anti-Liberal Page) and anti-opposition Facebook pages (Mishing, Political Grave Mikheil Ukrainologist, Journalists) have been publishing posts in which, on the one hand, the journalist of the “Mtavari Arkhi” was ridiculed for being emotional, on the other hand, claiming that Gvaramia’s employees were not upset about his arrest. Also, after the arrest of Nika Gvaramia, humiliating illustrations and videos of Giorgi Gabunia and other journalists of Mtavari Arkhi have also been disseminated.

The Facebook page “Political Grave” was created on April 30th, 2022 and was originally called “Political Sect”. The page mainly publishes posts against Mikheil Saakashvili, members of the “National Movement” and people connected with “Mtavari Arkhi.”

As for the page “Mishing,” it was created on May 11th, 2022 and mainly publishes discrediting posts against Mikheil Saakashvili and Nika Gvaramia.

Photo manipulation with the aim to discredit Gvaramia

In order to discredit the director of “Mtavari Arkhi” Nika Gvaramia and Giorgi Gabunia, the anti-opposition Facebook page “Reality” and various Facebook accounts (Dito Chubinidze, Giga Patatishvili, Madona Dzidzishvili, Avtandil Chogovadze, Gurami Xafava) have been disseminating an altered image, in which Gvaramia and Gabunia kiss each other. In fact, the photo was fact-checked by “Myth Detector” in 2021, while the authentic version of the photo featured the journalist Anna Asatiani standing between Nika Gvaramia and Giorgi Gabunia.

In the comments section of the posts of various media outlets, fake accounts expressed satisfaction with Gvaramia’s arrest and wrote that, as it turned out, the law had been enforced, and Gvaramia should have been arrested a long time ago. Fake accounts expressed dissatisfaction with the statement made by the Polish Foreign Ministry, which said that the arrest of Gvaramia would have a negative impact on both the perception of the rule of law and the freedom of the media.