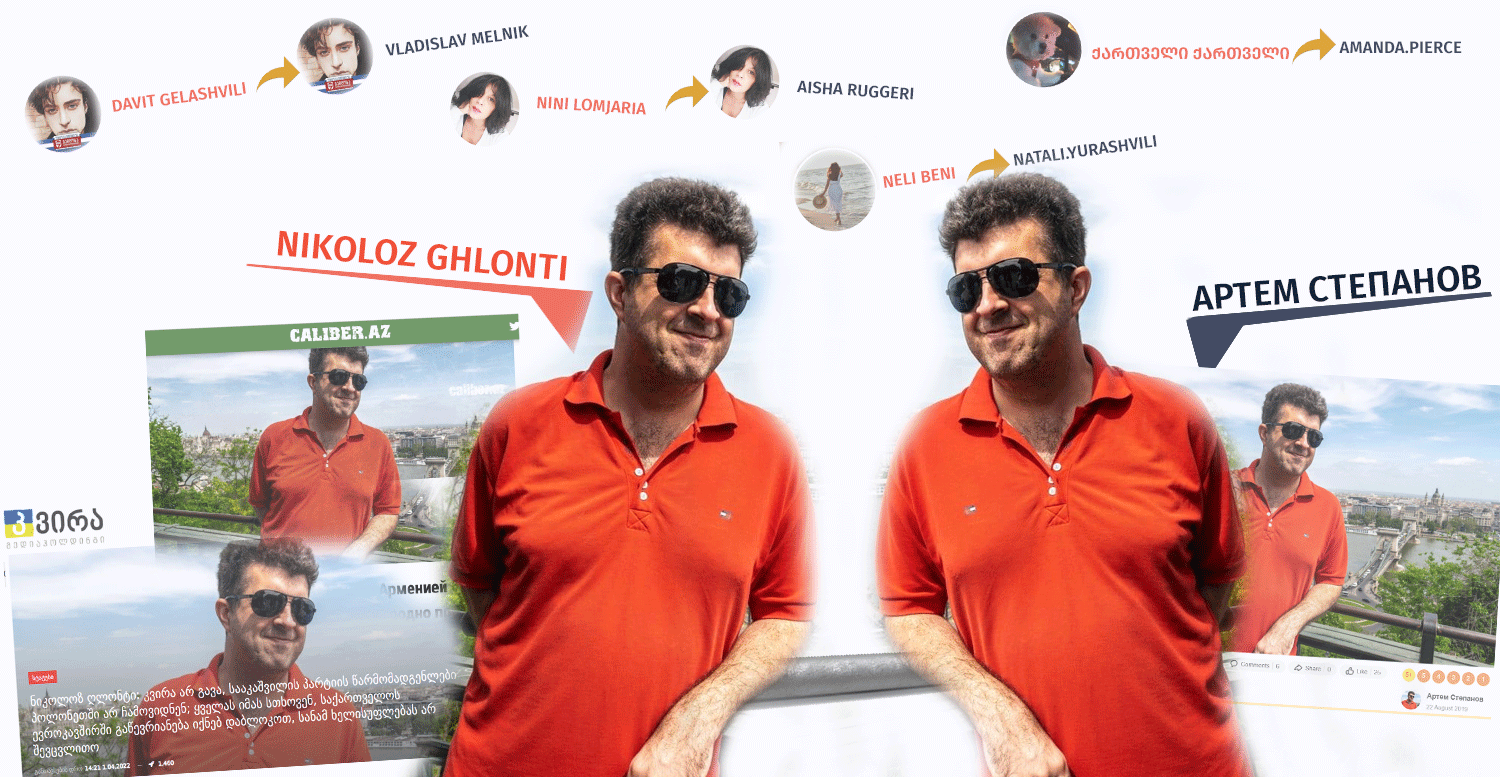 Since the initiation of the Russian military invasion of Ukraine on February 24th, 2022, the West has imposed a number of sanctions to stop its aggression. However, the Georgian government decided against joining the sanctions. According to the incumbent Georgian Dream party, sanctions are not an effective tool to stop the war, and the “radical opposition” intends to drag Georgia into the war. In addition, Tbilisi did not allow volunteer fighters to travel to Ukraine. Due to the non-release of volunteers and the position related to sanctions, the Ukrainian President, Volodymyr Zelenskyy, summoned the Ambassador of Ukraine from Tbilisi. According to Zelenskyy, official Ukraine does not understand the stance of the Georgian authorities, who refused to impose sanctions on Russia.

In parallel, the Georgian social media saw the emergence of a campaign to discredit Volodymyr Zelenskyy and the Ukrainian authorities, which involved pro-governmental and anti-opposition Facebook pages and fake accounts. On the one hand, these actors criticized Zelenskyy and his team, accusing them of collaborating with the United National Movement, claiming that they wanted to drag Georgia into the conflict, and on the other hand, writing that Gharibashvili and the Georgian government had saved the country from war. Notably, discrediting posts published by the Georgian Dream-affiliated and anti-opposition Facebook pages that criticized the Ukrainian government and emphasized their affiliation with the United National Movement and their desire to engage in the Georgian war were sponsored.

Between February 27th and April 27th, the following messages aimed at discrediting the Ukrainian government have been identified:

Trolls that steal other peoples’ identities

Trolls that conceal the identity 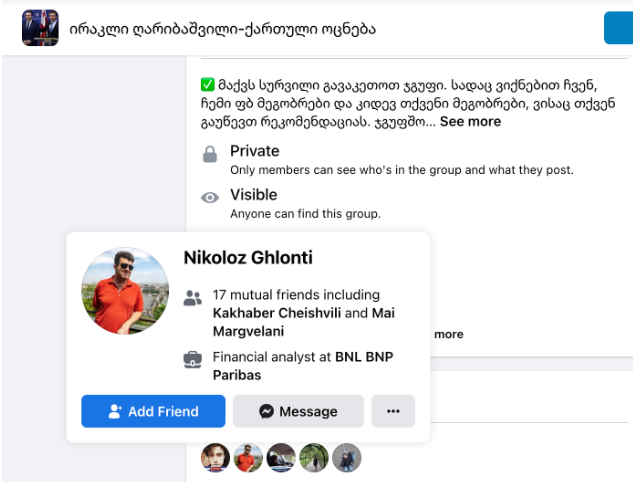 The Facebook group “Irakli Gharibashvili-Georgian Dream” was created on April 27th, 2022 and according to the description, contains information about the activities of Irakli Gharibashvili. Also, group members, if necessary, should help each other: “e.g. someone from ours needs help, someone whose Facebook is being bombarded by the UNM supporters, or someone coming to Budapest where I live and need help finding an apartment. In short, as one big family, a group of people who have common interests.” 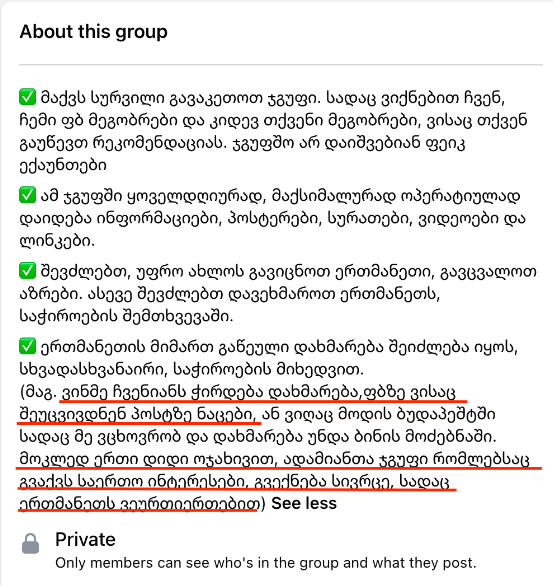 In addition to criticizing the President and the government of Ukraine, the administrators of the group also share posts in support of Irakli Gharibashvili on their personal profiles.

In addition, both profiles that steal other people’s identity publish identical, pro-government and anti-opposition content simultaneously. 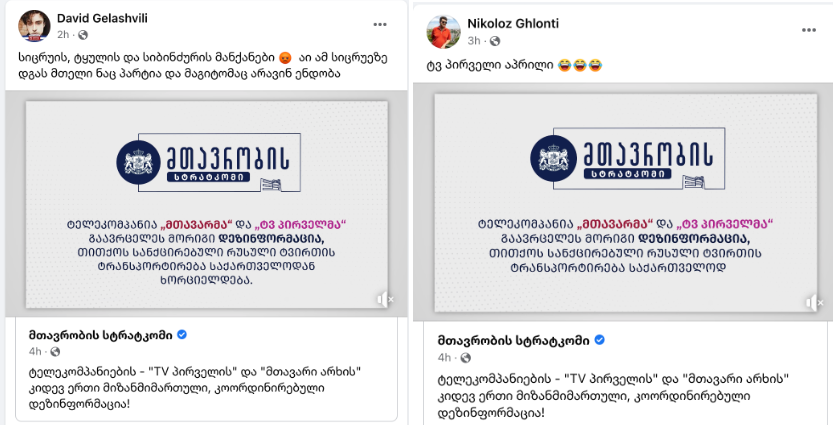 It should be noted that both accounts published the video uploaded by the Facebook page ‘Misha’s Archive’ on May 2nd at 4:20 against the former President of Georgia Mikheil Saakashvili on the same day (4:31 and 4:33). 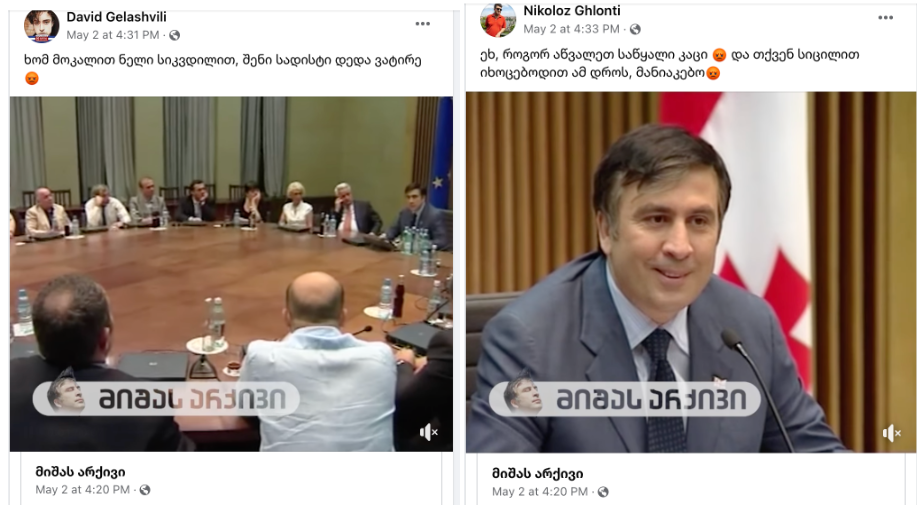 Nikoloz Ghlonti, one of the administrators of Gharibashvili support group, is positioning himself as a political scientist. On his Facebook profile, he indicates Warsaw as his place of residence and BNL BNP PARIBAS GROUP, a financial company based in Rome, as his place of work. “Myth Detector” contacted the Italian company, whose representative said that the company B.N.L has branches only in Italy and they do not operate in Poland. Davit Gelashvili indicates Budapest as his place of residence. During the day, both profiles often publish posts supporting the Prime Minister and discrediting the opposition. 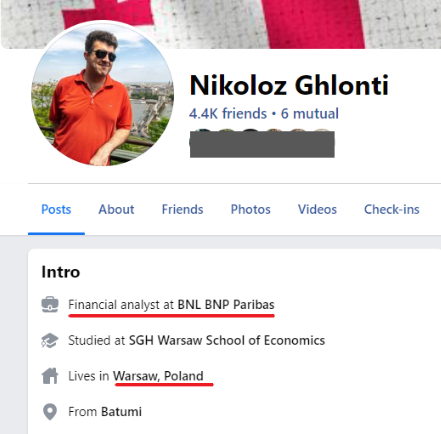 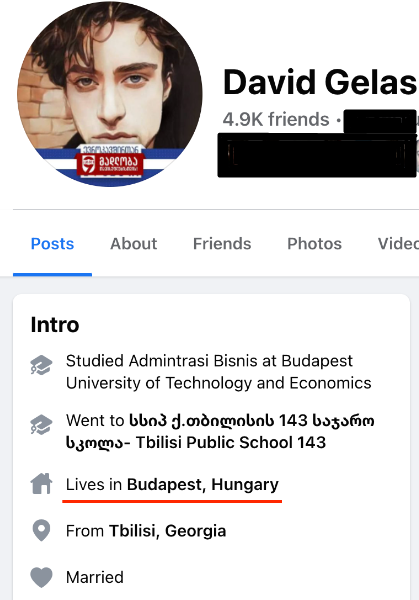 On April 25th, the fake account gave an interview to the Azerbaijani outlet caliber.az and apart from the relations between Azerbaijan and Georgia, discussed the situation in the region. 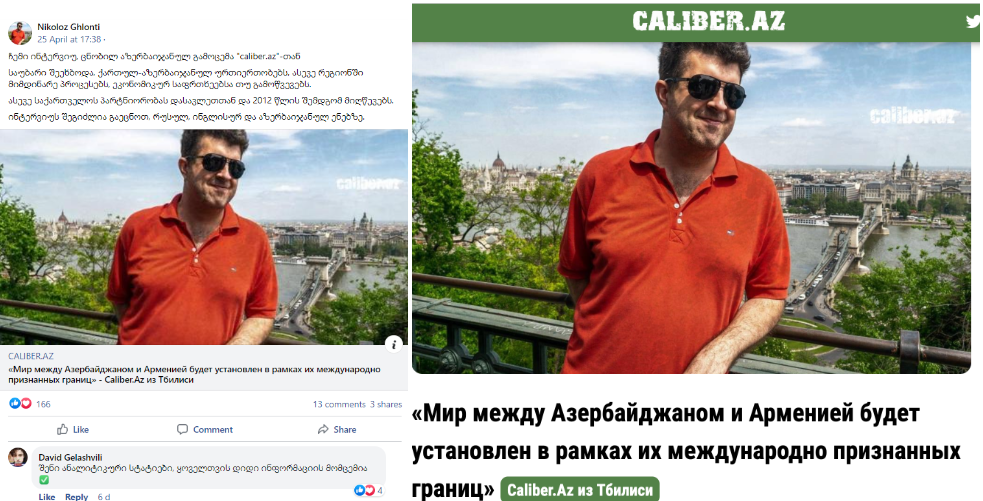 By looking up the name of ‘Nikoloz Glonti’ in the Google search engine, we see that a number of news agencies with pro-governmental editorial policy use him as a source. Online media outlets such as kvira.ge, reportiori.ge,  NSP.ge, For.ge, Lid.ge, infopostalioni.com, mpn.ge published the March 31st post by Nikoloz Ghlonti in which he wrote that members of the “United National Movement” are asking the members of the Sejm to prevent Georgia from joining the European Union and block the international aid. 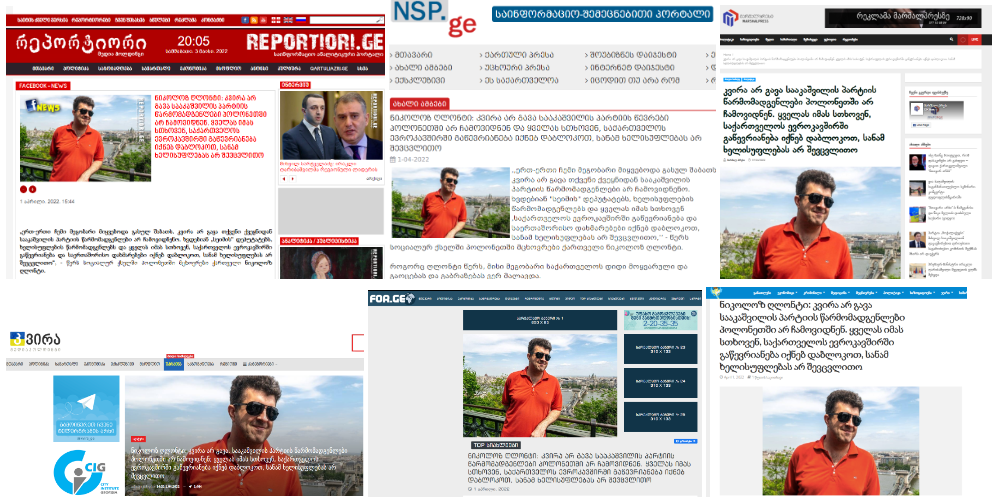 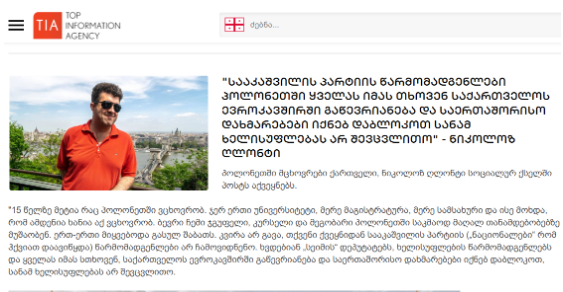 It should be noted that both the interview with the Azerbaijani media and the comment of Nikoloz Ghlonti published in Georgian agencies are accompanied by a photo of Artyom Stefanov stolen by Nikoloz Ghlonti and used on his personal profile.

Artyom Stefanov’s photo was also featured on sponsored Facebook post by the pro-governmental page ‘News Blog,’ which claimed that Ghlonti has lived in Poland for 15 years and has witnessed how the members of the United National Movement are arriving there to prevent Georgia joining the EU before the change of the government. 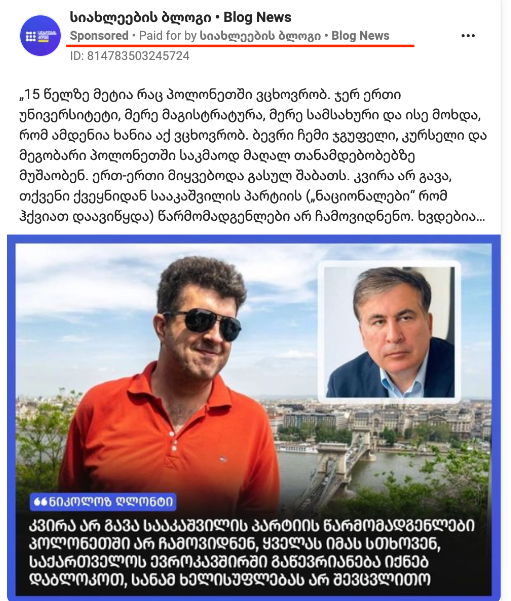 The Facebook user ‘Nikoloz Ghlonti’ steals the identity of OK.ru and Facebook user Artyom Stefanov. “Myth Detector” contacted Artyom Stefanov via “Messenger” video call to verify that he is a real person and his picture is used by a Georgian Facebook account. Artyom Stefanov noted that he is originally from Siberia and has been living in Warsaw, Poland for about 5 years. “We came to Poland precisely because of Putin’s rule, it became clear that the country (Russia) was going in a completely different direction. “It was very amazing (laughs) that I turned out to be Georgian, because I also had a photo with Saakashvili, I met him when he was in Wroclaw and he was holding a meeting on the Ukrainian elections.”

He also noted that his pages on social networks are not closed and according to the chronology of the photos it becomes clear when he was in which country. For example, a photo posted by Nikoloz Ghlonti on Facebook in April 2022 was uploaded by Artyom Stefanov on ok.ru in November 2021. In addition, Stefanov checks in the spots he visits and indicates the location while traveling in different countries. Also, Artyom Stefanov has posted travel albums of different countries on Odnoklassniku.ru by years.

As for the photo published by Nikoloz Ghlonti as his profile picture on October 7th, 2021, Artyom Stefanov uploaded it on the social network Odnoklassniki.ru in 2019 in the album titled “Spring Trip 2019“. In the same album we find other photos of Artyom Stefanov.

A case when media outlets with the governmental editorial policy quoted a person with a false identity was revealed by the “Myth Detector” in the past as well, when a blogger generated by artificial intelligence was used as a source against Mamuka Khazaradze:

Fake accounts criticized Volodymyr Zelenskyy for recalling the ambassador from Georgia, calling him a clown, writing that the President of Ukraine is ungrateful and could not appreciate the support Ukraine has received from Georgia. In addition, fake accounts expressed support for Irakli Gharibashvili for avoiding war in Georgia and accused the United National Movement of attempting to drag Georgian into the military conflict.

Eight pro-governmental and anti-opposition Facebook pages involved in the discrediting campaign have been identified, mainly appealing to issues that the Ukrainian government has excessive demands on Georgia and wants to involve the country in the war.

According to the Facebook page Mikheil Ukrainologi, Zelenskyy has no moral right to blame the Georgian government, since he has been after the 2008 war he has been “joking about Georgia” with the Georgian flag in hand. At the same time, the page claims that the Ukrainian authorities admit that they wanted to involve Georgia in the war, with which Mikheil Saakashvili should have helped them. 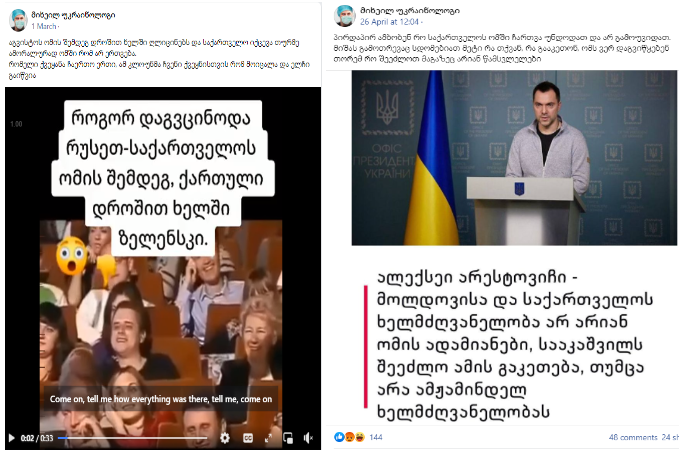 The same narrative is being disseminated by the Facebook page “Political Absurdity,” according to which, Arestovych who, together with the representatives of the “War Party”, was committed to Georgia’s involvement in the war and the opening of the second front, could not hide his satisfaction with the ongoing escalation in Moldova.” The author of the post writes that “Saakashvili’s ‘War Party’ and their lobbyists from Ukraine could not involve Georgia in the war!” 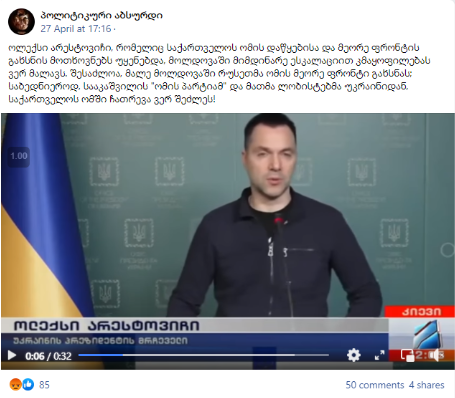 “Leader 41” – a page supportive of the Georgian Dream party also published a post claiming that amid the war, with the encouragement of the UNM, Zelenskyy and his entourage still find time for Georgia, criticizing the country for not opening a second front. 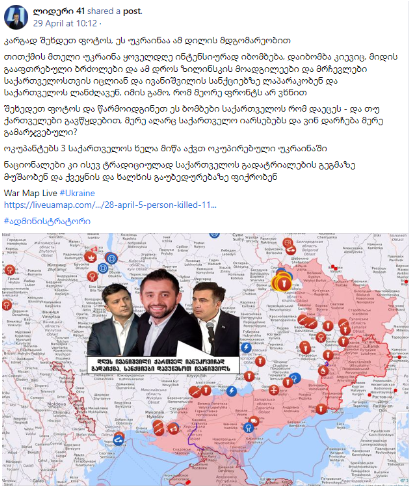 The Facebook page “2012-ianelebi” has published a number of posts aimed to discredit the Ukrainian President and authorities, as well as the United National Movement. According to posts published by the Facebook page, Ukraine did not open a second front during the Russo-Georgian war. Therefore, the “clown president” of Ukraine cannot have any pretensions against Georgia. 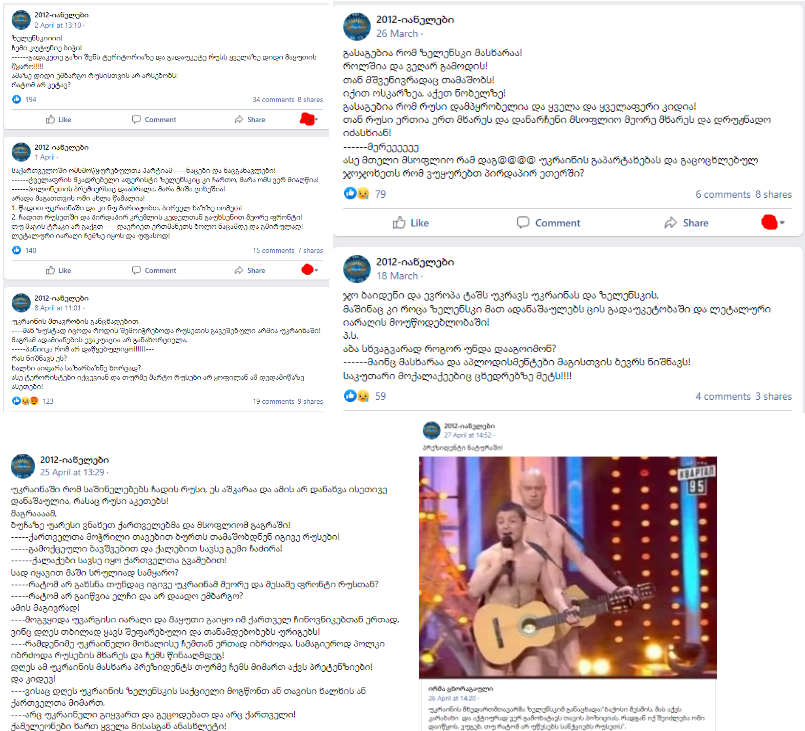 The Facebook page “Time for Truth” called Zelenskyy a swindler hired to destroy Ukraine and criticized him for recalling an ambassador from Georgia.

Facebook accounts “Mikheil Ganubajebeli” and “Terenti Gldaneli” have been writing that Ukraine is already going too far and, in fact, is dragging Georgia into the war by force. 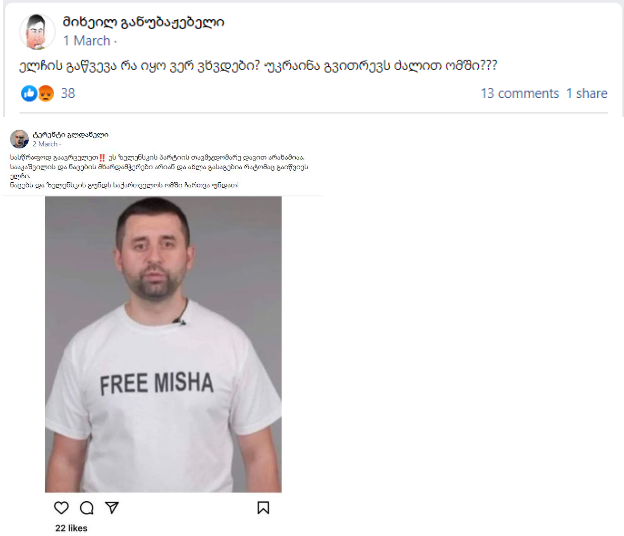 The post of “Political Absurdity” against the adviser to the head of the office of the President of Ukraine Oleksiy Arestovych is sponsored. The payer is Natela Kiladze. Georgian PM Shalva Papuashvili’s comment on Arestovych statement is sponsored by the Facebook page “News Blog”. 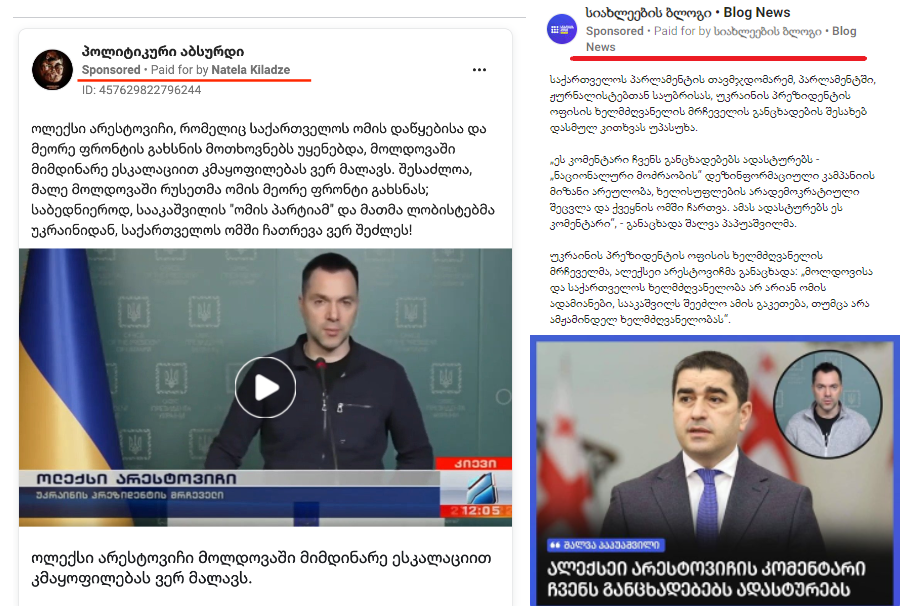 The same page features a sponsored post against the leader of Ukraine’s incumbent “Servant of the People” party, Davit Arkhamia. The interview of Arkhamia for the opposition media “Mtavari Arkhi” was being published with the comment “Devil’s Advocate.” 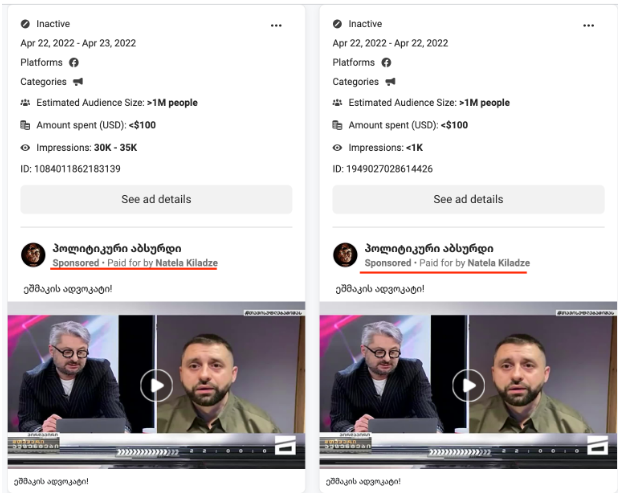 The Facebook page “Political Satire” also features a sponsored post against the representatives of the Ukrainian government. The commentary attached to the photo collage says that the Ukrainian government is constituted by the enemies of Georgia, who want a war and no matter how hard they try, a second front will not be opened in Georgia. 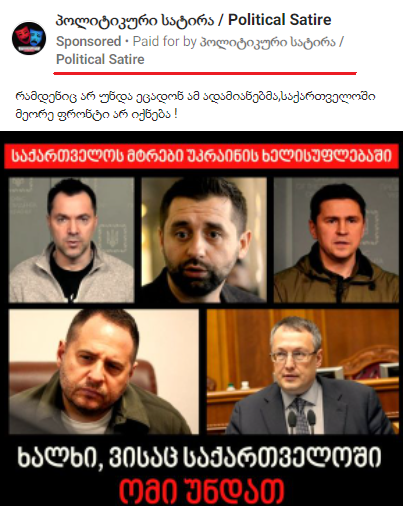 Sponsored posts against Arkhamia can also be found on the official websites of the ruling party leader Irakli Kobakhidze and the Georgian Dream party, as well as on the Facebook page of the pro-governmental Post TV.

Another post by Irakli Kobakhidze and the Georgian Dream was also sponsored, according to which, after the UNM’s visit to Ukraine, “senior Ukrainian officials have begun to speak openly about opening a second front in Georgia and transferring the ongoing war from Ukraine to Georgia.” 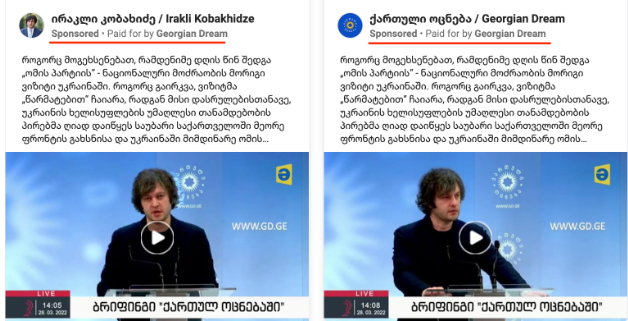 Posts of similar content were sponsored in the case of the Chairman of the Georgian Dream, Mamuka Mdinaradze. 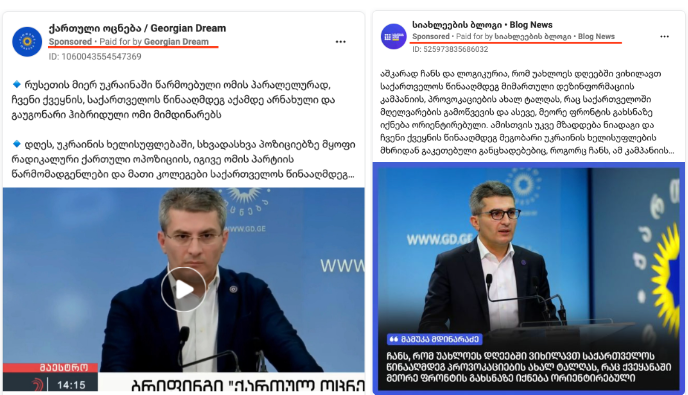 After Mykhailo Podolyak, the adviser to the Ukrainian president, issued a Twitter response to Transparency International-Georgia’s study of Russian-related businesses by Bidzina Ivanishvili, the founder of the Georgian Dream, writing that all pro-Russian oligarchs were subject to de-oligarchization, one additional sponsored post appeared against Podolyak himself and the director of Transparency International Georgia, Eka Gigauri. 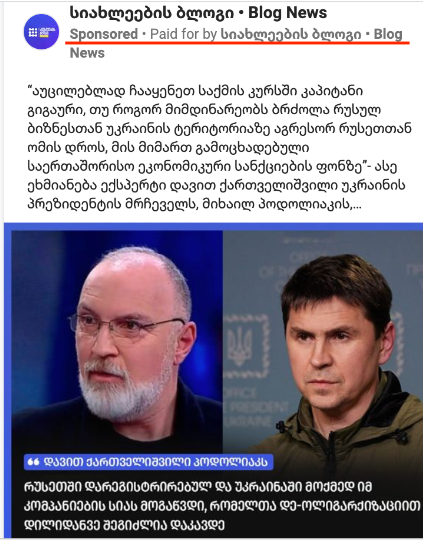 Post against various representatives of the Ukrainian government with photos and the caption “Georgia’s enemies in the Ukrainian government! People who want war in Georgia” is sponsored by the page ‘Political Satire.’ This page often publishes content discrediting the opposition and shares the posts of IMEDI TV, a media with a pro-governmental editorial policy. The page has also sponsored a story by Imedi TV, which explains how the Russian links of the former Deputy Minister of Internal Affairs of Ukraine, Alexander Gogilashvili, threatens the national security of Georgia and Ukraine. The page also sponsored a video address by a Ukrainian blogger, who talks about the threats of the Azov Battalion against Oleksiy Arestovych.