Disinformation as if US Citizens Benefit from Special Privileges in Georgia 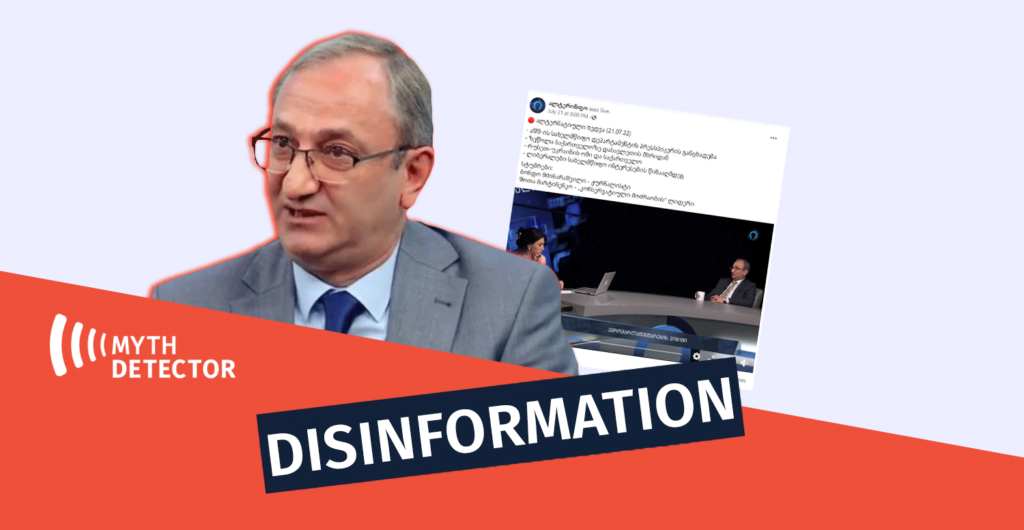 On July 21st, 2022, during the program “Alternative Vision” of Alt-Info TV, the member of the Board of Trustees of the Public Broadcaster, Bondo Mdzinarashvili, stressed that the strategic partnership charter between the USA and Georgia is a “master-servant charter,” which grants US citizens more rights in Georgia compared to other countries, including citizens of EU member states.

Bondo Mdzinarashvili: “Both the ambassador, the deputy ambassador and the embassy employees think they are the masters here. They often talk about the strategic partnership. I am familiar with the Charter of strategic partnership, and I, until this day, think that it is a master-servant charter… Citizens of the United States have far more rights here under our law than citizens of any other country, including the citizens of France, Great Britain and Germany”.

Mdzinarashvili also noted that the citizens of Georgia require a visa to enter the territory of the US:

Bondo Mdzinarashvili: “Georgian citizens are not allowed in the US without a visa. Do you know what partnership means? When I can visit you, and you can visit me. But when you come to visit me whenever you want, and you ask me to call you a week or a month in advance and agree, and whether I will agree or not is still a question; it is no longer partnership or friendship.” 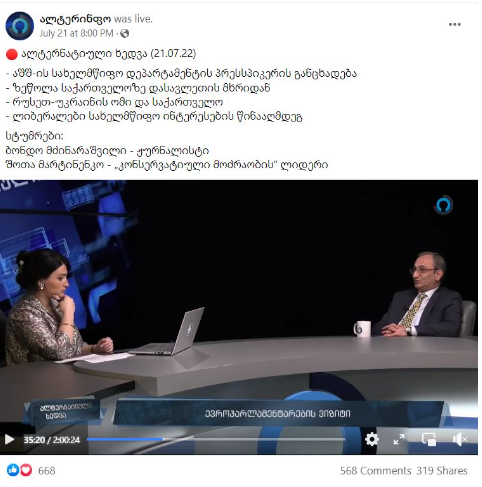 The claim that US citizens benefit from more rights in Georgia compared to the citizens of other countries is false. According to the legislation of Georgia, a foreigner in Georgia enjoys the same rights as a citizen of Georgia, while all foreigners are considered equal in the face of the law, regardless of their origin and nationality. US-Georgia Charter on Strategic Partnership does not entail granting privileges to US citizens. It is also manipulative to refer to the visa regime since, apart from the USA, Georgia has visa-free travel with many countries, including Russia and Great Britain, although Georgian citizens need a visa to travel to these countries.

US-Georgia Charter on Strategic Partnership was signed back in 2009. The Charter aims to deepen the partnership between the countries, support Georgia’s territorial integrity and Euro-Atlantic aspirations, and define partnership principles based on democratic values. The Charter entails cooperation in the following fields:

These directions are being addressed in meetings of working groups held annually. The Charter deepens the defence and security cooperation program between the US and Georgia and envisages the deepening of the agreement on bilateral investments and consideration of the possibility of a free trade agreement. Within the framework of the charter, cooperation between the two countries in the field of education has been expanded, which includes both academic exchange programs and cooperation between private and public universities and research institutes. Several projects have been implemented under the framework of the Charter, including promoting economic opportunities in areas inhabited by ethnic minorities and regions along the occupied line. The charter does not include any privileges for US citizens in Georgia.

As for visa-free travel, it is essential to note that the US is one of the 95 countries whose citizens have the right to enter Georgia without a visa and stay for one year. Among these are all the European Union countries, the citizens of which member states can enter Georgia with both a travel document and an identity card issued by a member state of the European Union.

The claim of Bondo Mdzinarashvili that the citizens of the US benefit with more rights compared to the citizens of other countries, including Germany, the UK and France, is based on the fact that Georgia has visa-free access to EU countries, while Georgian citizens need a visa to travel to the US. It should be noted that this is also the case for Russia, whose citizens enjoy a 1-year visa-free regime in Georgia, while the visa-free regime does not apply to Georgian citizens. The same applies to Great Britain, mentioned by Bondo Mdzinarishvili, and Ireland, a member of the European Union.

Notably, Citizens of Georgia can travel to 22 EU countries that are members of the Schengen area, as well as four non-EU countries (Iceland, Liechtenstein, Norway and Switzerland) and 4 Schengen candidate countries (Bulgaria, Cyprus, Romania, Croatia) for a short-term visit (90 days in any 180 days) without a visa.

As for other rights of US citizens, including residence, citizenship, labour, investment and entrepreneurial activities, property and other rights in Georgia, they are regulated by the Georgian Law on the Legal Status of Aliens and Stateless Persons. The law does not include any special privileges for US citizens.

According to Article 25 of the law, In Georgia, a foreigner has the same rights and freedoms and bears the same duties as a citizen of Georgia, while according to the second part:

“Aliens in Georgia shall be equal before the law irrespective of origin, social and property status, race, nationality, gender, education, language, religion, political, or other views, activity, and other circumstances.”

Bondo Mdzinarashvili was elected by the Parliament of Georgia as a member of the Board of Trustees of Public Broadcasting in 2020. Before the GPB, Mdzinarashvili worked as the editor-in-chief and host of a talk show on “TV Obieqtivi,” which is linked to the pro-Kremlin “Alliance of Patriots of Georgia” party.

Mdzinarashvili has been voicing xenophobic, homophobic and anti-Western messages for years, appearing in the reports of the Media Development Foundation and “Myth Detector’s” articles. Based on the report of the Media Development Foundation, statements containing hate speech of TV “Obieqtivi”, including Bondo Mdzinarashvili, were included in the fifth cycle report of the European Commission against Racism and Intolerance (ECRI), which concerned Georgia.

For more on the discriminatory and anti-Western rhetoric of Mdzinarashvili, see: