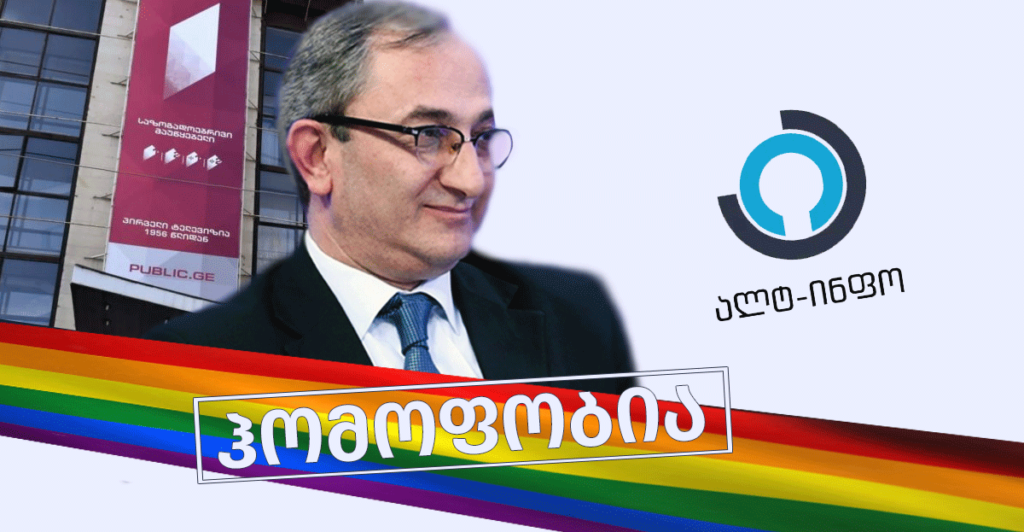 In the interview with Alt-Info TV program “Alt-Interview” on June 28, Bondo Mdzinarashvili, member of the Georgian Public Broadcaster’s Board of Trustees, former editor-in-chief and host of Obieqtivi TV who is known for hate speech and homophobic remarks, spoke about Tbilisi Pride. Mdzinarashvili made several homophobic and anti-Western messages during the interview:

The Georgian Public Broadcaster’s Code of Conduct contains a separate chapter on coverage of the issues related to sexual minorities. According to article 15.9, homosexuals frequently become victims of offensive stereotypes and program authors should remember that they too, like others, represent a part of society.

The Code of Conduct calls on the broadcaster’s employees not to contribute to strengthening stereotypes through mentioning a person’s sexual orientation without need, to be careful in selecting words and expressions and not to allow the program guests to use insulting terms.

In addition, the Code of Conduct for Broadcasters provides recommendations on the protection of the principles of diversity, equality and tolerance. Article 31 of the Code reads that broadcasters shall not promote stereotyping against the minorities

The Parliament of Georgia elected Bondo Mdzinarashvili as a member of the Board of Trustees of the Georgian Public Broadcaster in 2020. Earlier, Mdzinarashvili served as an editor-in-chief and a talk show host on Obieqtivi TV, a channel affiliated with the pro-Kremlin Alliance of Patriots party. For years, Bondo Mdzinarashvili has been the source of xenophobic, homophonic and anti-Western messages and has frequently appeared in the reports and materials prepared by the Media Development Foundation (MDF) and its fact-checking platform Myth Detector. Due to MDF’s report, Obieqtivi TV’s statements involving hate speech, as well as Bondo Mdzinarashvili’s comments were highlighted in the fifth monitoring cycle report also covering Georgia released by the European Commission Against Racism and Intolerance (ECRI).