Anti-Western and Xenophobic Statements by Candidate Backed by 14 Lawmakers 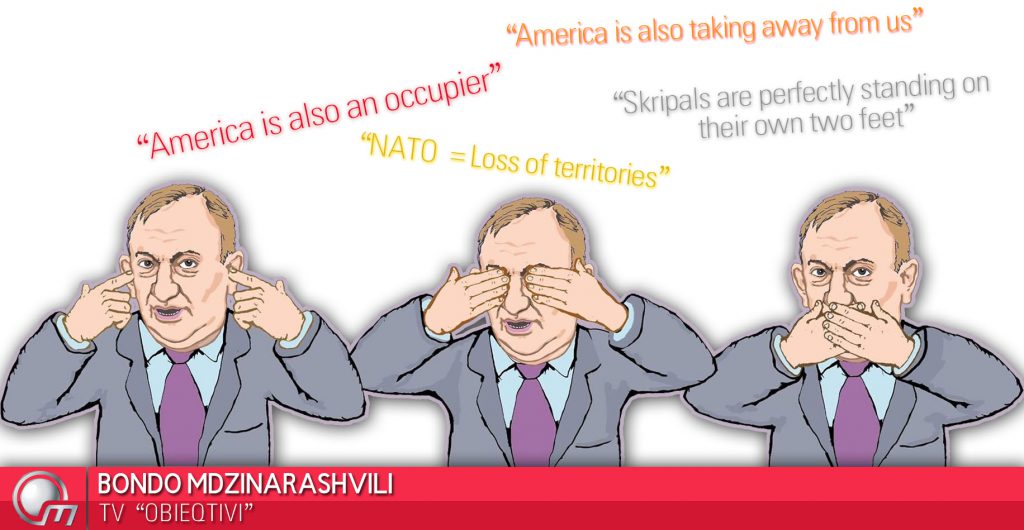 14 Georgian lawmakers have nominated Bondo Mdzinarashvili, editor-in-chief and host of Obieqtivi TV, a channel affiliated with the opposition Alliance of Patriots party, for a vacant seat in the Board of Trustees of Georgian Public Broadcaster. The TV channel and personally Bondo Mdzinarashvili are known for anti-Western, pro-Russian, Turkophobic remarks and hate speech.

The Media Development Foundation offers a review of anti-American and anti-NATO statements, as well as various conspiratorial messages voiced by Bondo Mdzinarashvili in 2019 and earlier.

Mdzinarashvili draws parallels between Russia’s occupation of Georgian territories and alleged U.S. occupation, promoting a well-known Kremlin message that the United States and the West rule over other countries.

Bondo Mdzinarashvili: “The situation of the 17th, 16th, 18th centuries is now reoccurring in our country, when the Ottoman Empire and the Persian Empire had divided Georgia. Nowadays, the occupied territory is controlled by Russians. The rest of Georgia is occupied by the United States, but we do not call it occupation.”

Bondo Mdzinarashvili: “Where is our sovereignty, our independence, our state here; how can we be called the state, when Vazha Gaprindshvili was brought to justice by “independent” South Ossetian Republic under the criminal code of Russia; this state convicted Gaprindashvili under the criminal code of another state. So, what Tskhinvali region means for Russia, the same we are for the United States, though it should be admitted that our country is not ruled under the U.S. code.”

Bondo Mdzinarashvili: “All the misfortunes faced by us are coming from beyond the ocean. It is very important if it is our strategic partner. In such case, it should care for strengthening our country, promoting education, strong economy, good judiciary, but everything happens vice versa.”

Bondo Mdzinarashvili: “We do not want Georgia to be turned into a battlefield; Americans and Russians will confront each other and what about us… Are we the friends of the United States or simply a means …It does not matter for this country whether Georgians will live here or non-Georgians; most important for it is to control this place – a crossroad between Europe and Asia.”

Bondo Mdzinarashvili: “Nobody can overpower us. We will win with our truth. But we should be cautious so that our truth does not make us lose our eyesight, make us blind, like some politicians in this country, who are throwing this country into the throat of Russia in order to satisfy their own ambitions, to fulfill Russia’s orders or orders of other countries and turn Georgia into a proving ground.”

Bondo Mdzinarashvili: “The United States failed to protect its own interests here in 2008, did not it?!”

Bondo Mdzinarashvili: “We know what the United States did in North Africa, Middle East, everyone knows about it. It destructed millions of people in an attempt to establish democracy, but no democracy has been established there.”

Mdzinarashvili also cast doubt over the economic purpose of the Anaklia deep sea port project, discussing it in the context of the U.S. military interests.

Bondo Mdzinarashvili: “…When General [Hodges] is doing it, it already implies that the Anaklia port is critically important not for economic development, but for quite different purposes.”

Bondo Mdzinarashvili: “We can actually say that we do not elect Georgian governments, legislative authorities and especially those, who are appointed, are not appointed by us. These people do not express the will of the Georgian nation regardless of whether we are well disposed to them or not. So, they appoint these people for us and the only person who is not appointed by them, thank God, is our Catholicos-Patriarch.”

Bondo Mdzinarashvili: “We have economists and we have lawyers, we have experts in constitutional issues who are butting against each other, but ultimately it appeared that OSCE, ODIHR, Venice Commission and our international friends, other friends should determine whether  our initiatives related to the electoral environment comply with our constitution; one can hardly find greater misfortune in the country famous for its lawyers than this. It means that we should definitely return to the headwater and try to clean it, because it is very turbid.”

Bondo Mdzinarashvili: “Why did not NATO help us retain our territories? Why are these speculations spread? We have lost the territory on our path towards NATO membership! Our territories had not been recognized as independent states then. Russia should have ensured that our territories had remained in our ownership!”

Bondo Mdzinarashvili: We got the war while knocking at the NATO door. Who triggered this war? What triggered this war? Was it Russia? Russia entered the territory of our country, but why could not we defend ourselves due to this strategic partnership? Why? There is no mechanism! We are not and will never be a NATO member! Meanwhile, we may again lose our lands and what will happen then?”

Bondo Mdzinarashvili: “Russians are marking the border within the limits of South Ossetian Autonomous District, which were restored by Saakashvili… Just those American Senators and some hawks, who eventually ruined Georgia, encouraged him to do it and it appeared that Georgia’s two ancient territories were recognized by Russia as independent states.”

Bondo Mdzinarashvili: “… It appeared that 33% of our territories, as of 1921, have been occupied by Turkey and we will find ourselves in a similar “temporary” situation regarding Tskhinvali and Sokhumi as well.”

Bondo Mdzinarashvili: “We are facing the most serious challenge and Turkey, with its TV series, brothels and various misfortunes, is trying to carry out cultural-economic and political expansion in Georgia… Since Georgian special services are subordinate to U.S. special services, actually it becomes impossible to protect Georgia against foreign attacks (Bondo Mdzinarashvili, Asaval-Dasavali, February 5-11).”

Bondo Mdzinarashvili: “Even British experts failed to find out this so called Novichok [a nerve agent] in this case. The Skripals recovered strangely that cannot be said about Litvinenko. Russia faced a lot of sanctions, a lot of protests and it appeared that these two persons [Sergei Skripal and his daughter Yulia] feel quite well and have no problems; so, it seems that everything was staged.”

The following 14 lawmakers nominated Bondo Mdzinarashvili’s for a vacant seat in GPB’s Board of Trustees: