What Did Biden Say in 1997 About the Baltic States Joining NATO? 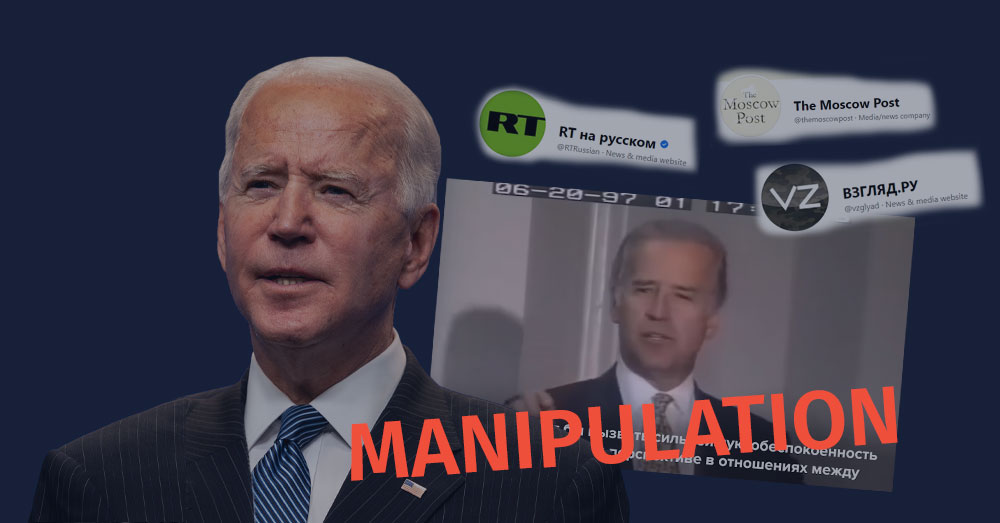 On March 8th, Russian state-controlled media “Russia Today” published a video in which U.S. President Joe Biden talks about Estonia, Latvia and Lithuania joining NATO and Russia’s attitude towards it. The video represents a 35-second clip from one of Biden’s speeches from 1997. In an excerpt, Biden, the then-senator, says the following:

Joe Biden: “I think the one place, where the greatest consternation will be caused in the short term, for admission, having nothing to do with the merit, the preparedness of the country to come in, would be to admit the Baltic States now in terms of NATO-Russian, US-Russian relations. And if there was ever anything that was going to tip the balance were it to be tipped, in terms of a vigorous and a hostile reaction, I don’t mean military, in Russia, it would be that.”

Russia Today’s post says that as early as 1997, Biden understood what it meant for Russia for the former Soviet Union republics to join NATO. An identical video was published by The Moscow Post and ВЗГЛЯД.РУ. Excerpts from Biden’s speech were also posted on the Facebook  СМЕРШ, Пул Первого, Русская армия – Russian army, Russian Washington and Кавказ и Россия: вместе навсегда. The video was also published in the Facebook group Новости Эстонии.

The 1997 speech of U.S. President Joe Biden is being disseminated in the Russian media manipulatively and without the full context. In the next part of his speech, Biden hopes that Russia will realize that NATO enlargement will benefit it as well and that the Baltic states would eventually join the alliance.

The excerpt disseminated on Russian-language Facebook pages is from a speech by Joe Biden to the Atlantic Council on June 20th, 1997. Biden, a then-member of the U.S. Senate Foreign Relations Committee, spoke about NATO enlargement. Biden spoke about the NATO summit scheduled for July of the same year, where Hungary, Poland and the Czech Republic were invited to join the alliance. Biden was also asked one question about the prospect of the Baltic states’ future membership in NATO, to which he gave an answer given in a Russian-language post. However, the video covers only a small part of the response, omitting the part where Biden hoped that Russia would realize that NATO enlargement was also in its interests to create stability and security in the region and that Estonia, Latvia and Lithuania would eventually become the members of the alliance:

Joe Biden: “So, the way I look at the calculus here, sides now are as follows: I believe, and I was once told that to be in this business, you have to be an optimist. I believe time, time meaning the next several years, will solve this. To the degree to which Russia becomes comfortable with, and it is demonstrated that the enlargement of NATO is not only not in their interest but ultimately in their interest in expanding stability is the degree to which the accession of the Baltics into NATO becomes a reality. I think there is a correlation between the two. And so it is my expectation, as well as my hope, that in the near term, meaning by the end of this century or be thereafter, the Balts will be admitted to NATO, If they still are seeking admission to NATO.”

In the same speech, Biden stated that he did not think NATO enlargement needed to have a negative impact on US-Russian relations. He said he came to this conclusion during visits to Moscow and other Eastern European countries when he met with Russian politicians and experts. Biden said that while few Russians welcome NATO enlargement, politicians have embraced the idea, and none of the Russian politicians, including the parliamentarians he met, consider the alliance’s enlargement to be a challenge to their national security. Biden said all politicians and experts understood the non-aggressive nature of the alliance, which was expressed in its declaration that it would not deploy a nuclear arsenal on the territory of the newly joined NATO countries. According to him, the problem with NATO enlargement is more psychological on their part and is related to the loss of the empire and the uncertainty about Russia’s place in the world in the 21st century.

The aforementioned quote aligns with the Kremlin disinformation campaign, which, in the context of the Russia-Ukraine war, aims to claim that there existed an official premise from the Western countries that NATO would not expand eastwards. For more information on the topic, see the following articles: