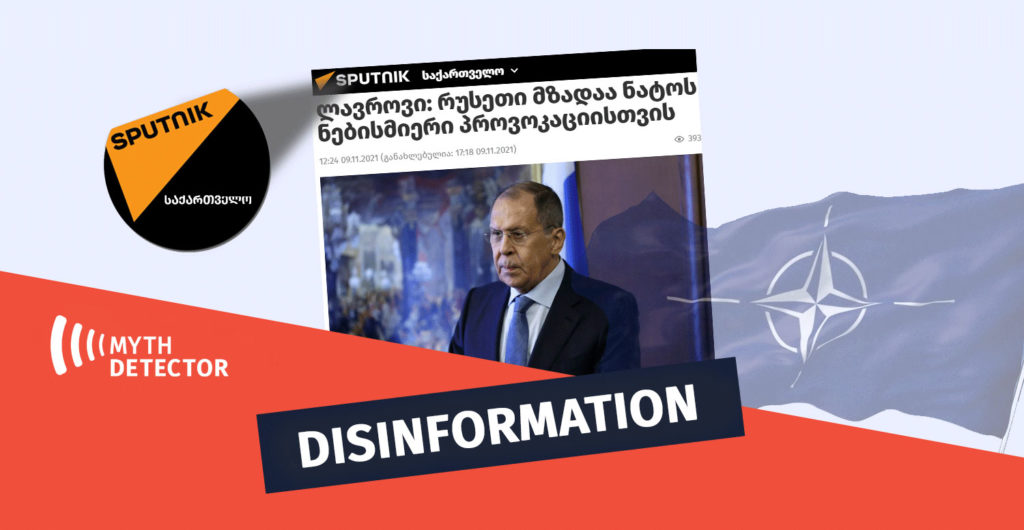 On November 9th, “Sputnik Georgia” published anarticle citing Sergey Lavrov, the Minister of Foreign Affairs of Russia. Lavrov claims that “NATO military exercises in the Black Sea serve the aspirations of the United States and its allies to strengthen Russia’s containment policy,” and that “these maneuvers violate the central part of the Russia-NATO Act, as NATO pledged not to move its military infrastructure eastward, on the territory of the new members.”

The claim of Lavrov that the initiation of the NATO military exercises in the Black Sea violates the central part of the Russia-NATO Founding Act is false. The act does not prohibit conducting military exercises and obliges both sides to “maintain only such military capabilities, individually or in conjunction with others, as are commensurate with individual or collective legitimate security needs, taking into account their international obligations.” In addition, the obligation to NATO not to deploy military forces in Europe was predetermined by the existing security environment of 1997. Noteworthy, the agreement was breached by Russia by trying to rebuild the European security architecture by aggressive military measures.

TheFounding Act on mutual relations, cooperation and security between NATO and the Russian Federation was signed in 1997. The act delegated the responsibilities to both NATO and Russia within the context of the security perspectives of that time.

The act stresses that the members of the North Atlantic Treaty Organization have no intention, no plan and no reason to deploy nuclear weapons on the territory of new members. Not to mention, NATO does not intend to modify any aspect of its nuclear posture and policy. Both sides take the responsibility to maintain military capabilities only up to a point to meet the individual or collective legitimate security needs.

The document also reiterates that instead of deploying additional military forces, NATO would ensure its collective defense and carry out related tasks through the enhancement of the compatibility, integration and support of the existing military resources. In this context, reinforcement may take place, when necessary, in the event of defence against a “threat of aggression,” missions in support of peace consistent with the United Nations Charter and the OSCE governing principles, as well as for exercises consistent with the adapted CFE Treaty.

In fact, the Founding Act was breached by Russia. By signing this agreement, Russia was obliged not to threaten or use force against NATO allies and other states. Russiaviolated this obligation when it invaded Georgia in 2008 and occupied 20% of the country. In addition, Russia illegally annexed Crimea in 2014 and continues to support separatists in Ukraine with weapons and military. In response to these actions, NATO deployed rotating defense units on the territory of its Eastern European member states, although this does not contradict the NATO-Russia founding act, as there was no permanent deployment of significant combat forces on the territory of its Eastern members.

Similar stories of Russia blaming NATO for breaching the fundamental principles of the Founding Act are rather common. For more details, see the articles by “Myth Detector:”

This topic is oftentackled by EUvsDisinfo, the European External Action Service’s (EEAS) East StratCom Task Force. Cases of disinformation about the violation of the NATO-Russia founding act include allegations on the EUvsDisinfo platform such as “NATO violates the founding act”, “NATO violated its pledge not to move eastwards”, “Approaching Russian border is one of NATO’s gross violation of its own commitments.”