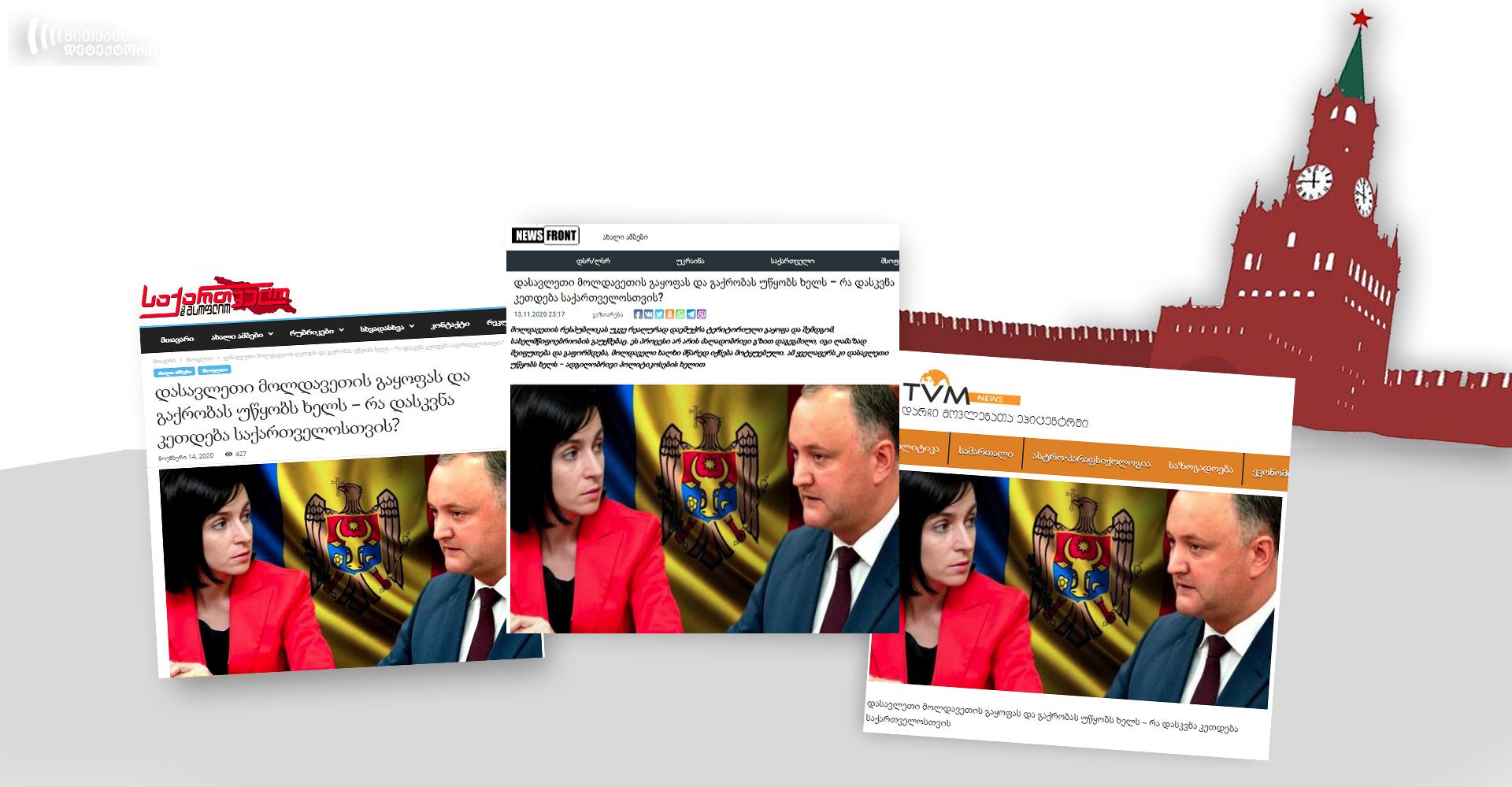 Second round of the Presidential Elections in Moldova that took place on November 15 revealed the winner – a pro-European candidate, Maia Sandu. Sandu, who is the leader of the Party of Action and Solidarity, received 57.75% of the votes. Her opponent, pro-Russian Igor Dodon, received 42.25%.

Georgian online media, including pro-Kremlin ones, disseminated messages about the expected results of the second round of the elections. The outlets included saqinform.ge, News Front Georgia, tvalsazrisi.ge, geworld.ge, mediapress.ge, and Tvm.ge. The given media published a broad review by Gulbaat Rtskhiladze titled “West Contributes to Division and Disappearance of Moldavia – What Does This Mean for Georgia?” News Front Georgia, Geworld, and TVM.ge also published identical photo collages. 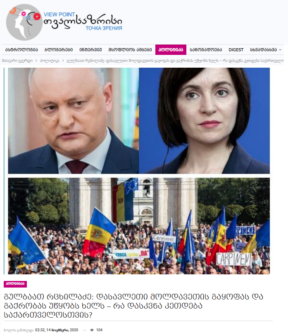 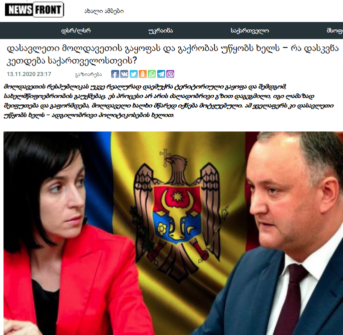 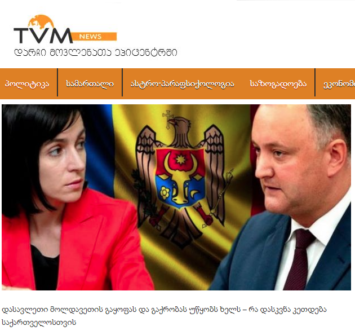 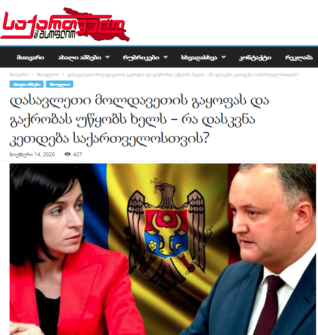 As the article, published by News Front on November 14 reveals, Rtskhiladze is currently in Moldova and observes “how pro-Soros powers are attacking the statehood of Moldavia and want to dissolve the country just to escalate tensions with Russia”.

According to the CrowdTangle data, the given article was shared by 16 different users on November 17, including party (Group of Supporters of the Alliance of Patriots of Georgia), anti-liberal (Antiliberal space), pro-Russian (Group of Those Who Agree with Kote Chikviladze and Gulbaat Rtskhiladze: Russia and Georgia, Stalin) etc.

Gulbaat Rtskhiladze’s review touches upon the scenario of events in Moldova in case pro-European Maia Sandu wins. Moreover, the author tries to discredit the activity and pro-Western orientation of Maia Sandu. Rtskhiladze voices six main narratives in his review:

1. Sandu has been “grown” in pro-Soros laboratories.

The author of the article calls Maia Sandu “a person who ‘grew’ in pro-Soros labs” and criticizes her pro-Western orientation. According to Rtskhiladze, it is impossible that a nation as religious and conservative as Moldova likes a “pro-Soros lady”.

2.The West has funded Sandu’s victory and the strengthening of the pro-Western political spectrum in Moldova.

According to the author, the West invested financial resources in Sandu’s victory. Gulbaat Rtskhiladze once again draws a parallel with Ukraine and Georgia and notes that just like these countries, Moldova will be drawn into an “anti-Russian gamble” which will affect the country economically.

Shota Apkhaidze, the Editor-in-Chief of News Front also wrote in his article about the interference of foreign powers in the Presidential Elections in Moldova and noted that the West would assure that its candidate wins by any means.

3. Moldova is under the threat of territorial division and the West contributes to it.

The author of the article appealed towards the “gross interference” of the West which would allegedly result in Moldova losing its territories. Gulbaat Rtskhiladze drew a parallel with the developments in Ukraine and Georgia and notes that just like Abkhazia and Samachablo in case of Georgia and Crimea in case of Ukraine, Moldova would see the similar scenario if it “leaves the Russian orbit” and starts pursuing Western interests.

4. Moldova will join Romania which will result in the deterioration of the life quality of Moldovans.

The issue of Moldova joining Romania, also known as Rumanization, is also raised. Maia Sandu is a supporter of this policy. The author believes that Moldova will not benefit from joining Romania, as the latter does not stand out in the EU with its level of development and, therefore, “has nothing to offer”.

The article cites a position of Sandu’s opponent – now former President of Moldova, Igor Dodon. He clearly distances himself from the Rumanization process and notes that this process would lead to a civil confrontation. Gulbaat Rtskhiladze does not exclude that Russia will be blamed for any unrests that may follow.

6. The “kind goals” of Russia: it actually tries to maintain the sovereignty and the territorial integrity of Moldova.

In parallel with the “gross interference” of the West, the author stressed the Russian factor too. He claimed that Russia is motivated to maintain Moldova’s sovereignty and territorial integrity.

It is noteworthy that the Kremlin sees Moldova as its sphere of influence, therefore, the victory of a pro-Western candidate poses a threat to Russia’s interests. The main opponent of Maia Sandu, now the former President of Moldova, Igor Dodon is a former communist who has openly admitted his pro-Russian stance.

Other sources also point to Dodon’s ties with Russia. According to an investigation by Mikhail Khodorkovsky’s Dossier Center, Vladimir Chernov, a former foreign intelligence general, leads the Moldova department of the Kremlin’s administration. As of now, Chernov is the Head of the Directorate for Inter-Regional Relations and Cultural Contacts with Foreign Countries at the Administration of the President of Russian Federation.

The narrative that the pro-Western powers interfere in the domestic policy of Moldova is characteristic to the rhetoric of the Russian politicians. On October 14, 2020, in his interview with three different Russian radio stations, Sergey Lavrov, the Minister of Foreign Affairs of Russia blamed the United States for interfering in domestic affairs of post-Soviet countries, including Moldova. Lavrov claimed that Americans try to influence everything so that pro-Western powers can gain a decisive victory and avoid coalitions such as the one between the parties of [pro-Western] Sandu and [pro-Russian] Dodon.

As for establishing strong ties with Romania, this issue is not in the interests of Russia due to territorial dispute. The idea of joining Romania became actual in Moldova in 1991. A large part of Moldova was controlled by Russia for a century before that. During the world wars, Romania took control of those territories until the Soviet Union annexed the entire country in 1940. Transnistria, a part of Moldova, became a ground for confrontations after the dissolution of the Soviet Union, as Russian-speaking locals were demanding independence. Until today, Transnistria is considered a zone of a “frozen conflict” and Russian “peacekeepers” are placed there.

Shota Apkhaidze is the Editor-in-Chief of News Front Georgia. Accounts of the given edition, that used to operate in different languages, were deleted by Facebook due to coordinated inauthentic behavior.

The article uses data by CrowdTangle, a Facebook search tool 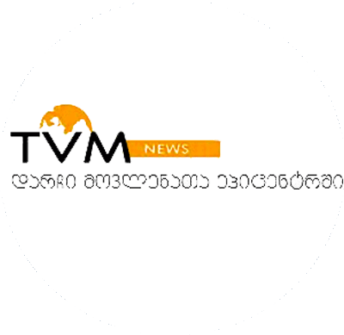 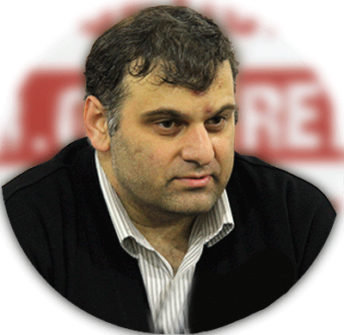