Pro-government “Fifth Column” and others vs Kelly Degnan 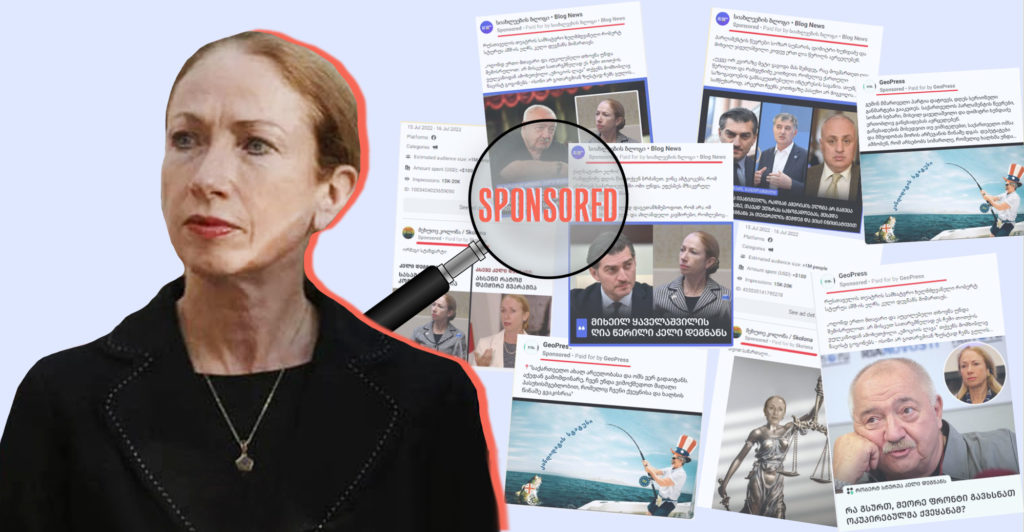 On 15 July 2022, Lasha Chkhikvadze, the judge presiding over the case of General Director of Mtavari Arkhi Nika Gvaramia, released a statement about his communication with the US Embassy. In this statement the judge alleged that US Ambassador to Georgia Kelly Degnan inquired about the reason of the guilty verdict delivered by him. Speaking with media, US Ambassador Kelly Degnan said that any suggestion that the United States was interfering in the judicial process was not true.

Earlier, three members of the ruling party: Sozar Subari, Dimitri Khundadze and Mikheil Kavelashvili left the “Georgian Dream” citing the intention to “equip society with truth” as a reason. According to the former ruling party members, there are “great powers” that seek to destabilize Georgia. Furthermore, Mikheil Kavelashvili said in his open letter to the US Ambassador that a desire to drag Georgia into the war had been expressed not by the Federal Security Service of Russia, but by individuals that were financed and supported by the US Embassy.

The statement by Kelly Degnan about the absence of any link of the US Ambassy with the judicial process was followed by a concerted discreditation campaign conducted by ruling party representatives, Facebook pages associated with the government as well as antiliberal and pro-Kremlin Facebook accounts.

What do Fifth Column, Sect and Terenti Gldaneli have in common with the accounts of Alt-Info/Conservative Movement?

On 15 July 2022, the Facebook pages მეხუთე კოლონა/5 kolona and  ტერენტი გლდანელი published a card featuring a statue of the Greek goddess of justice and fairness, Themis, which had the face of Kelly Degnan. Both pages released the posts with identical illustration and content (“justice herself” “she herself is justice!”) simultaneously, at 19:09 o’clock. 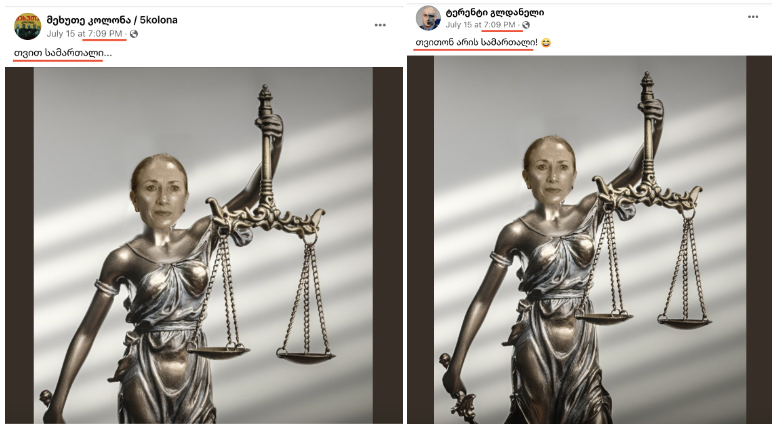 Minutes later (at 19:19), Terenti Gldaneli’s post about Kelly Degnan was shared by სექტა [Sect], yet another Facebook page associated with the government. 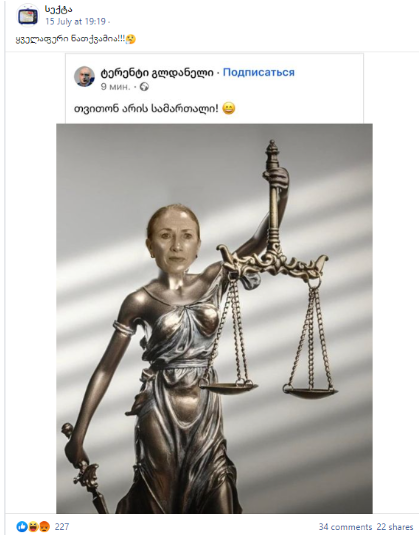 The post of government-related accounts against the US Ambassador were shared by სარკრაზმელები (at 19:19), a FB page supporting “Conservative Movement,” and Goga Tukhareli (at 19:29), an individual account of party supporter. 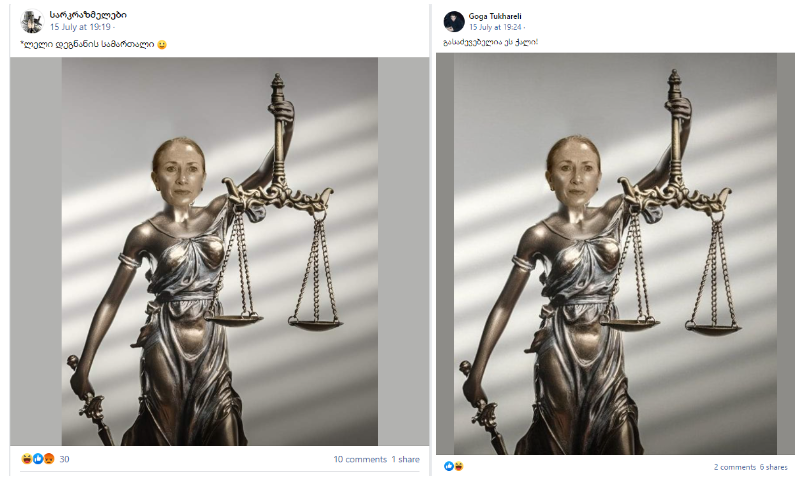 Sponsored posts alleging the interference in the independence of court

It is worth to note that the Facebook page Fifth Column sponsored the post featuring Themis with the face of US Ambassador as well as the second post published on 15 July, in which Kelly Degnan was accused of applying “double standards.” 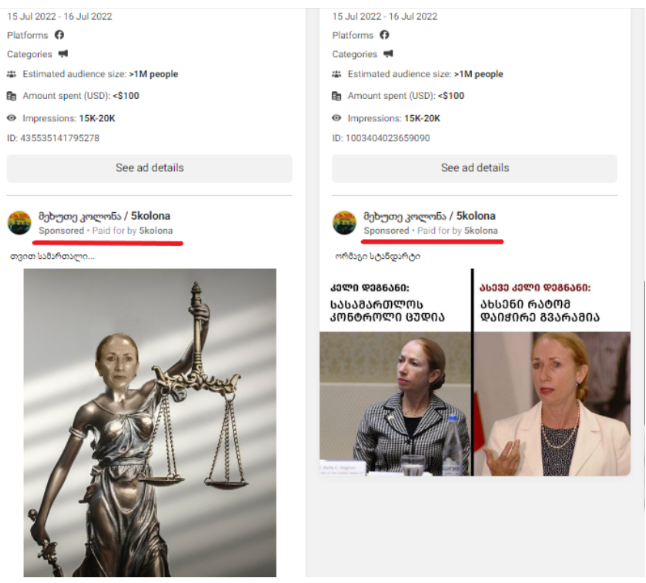 Also, a statement of former ruling party members, Sozar Subari and Mikheil Kavelashvili, published on the governmental FB page GeoPress, in which they posed additional questions to the US Ambassador about the interference in the judge’s affair, was sponsored. 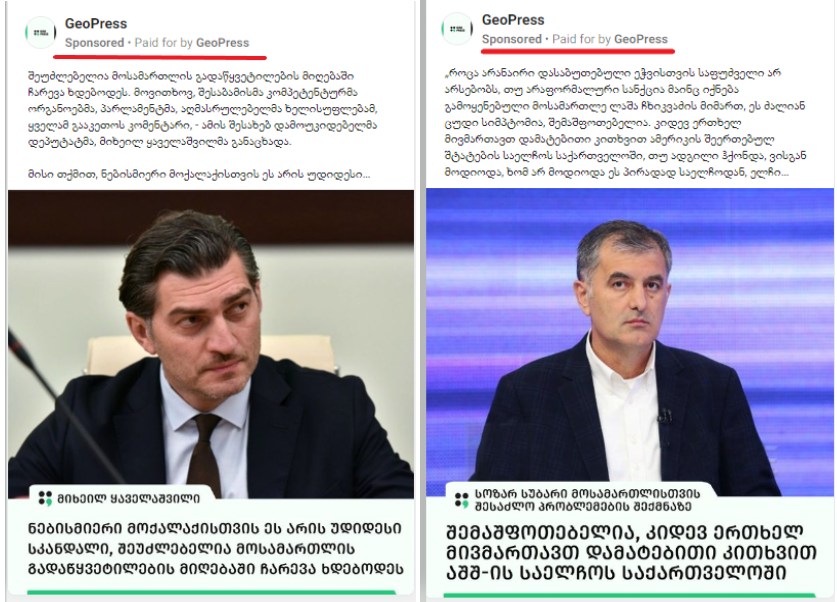 Sponsored posts containing allegations about attempts to drag Georgia into the war were published by Facebook pages associated with the government, GeoPress and სიახლეების ბლოგი • Blog News, which positioned themselves as news agencies. In early July, when the three ruling party members left “Georgian Dream” on the pretext of telling the truth to public, both FB pages published an open letter of the former Georgian Dream MP, Mikheil Kavelashvili, to Kelly Degnan. In this letter Kavelashvili stated that the narrative about dragging Georgia into the war came not from the Federal Security Service of Russia but from individuals financed and supported by the US Embassy. This open letter, published by GeoPress and Blog News, was sponsored. 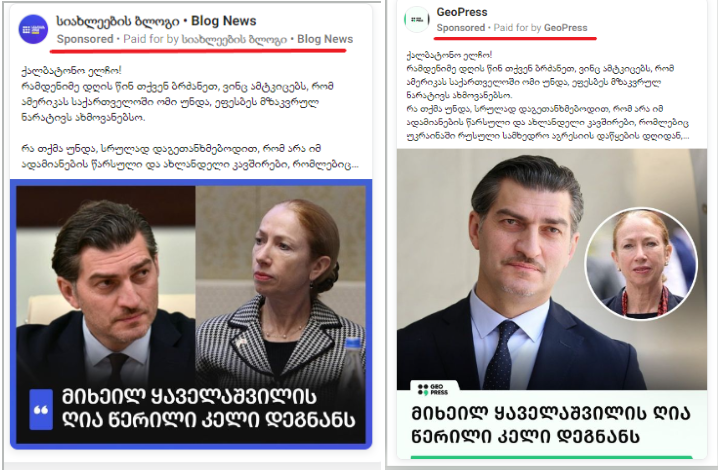 The same individuals released another open letter to Kelly Degnan, in which they demanded that the US Ambassador answer the questions. In the letter, the former Georgian Dream members called on Bidzina Ivanisvhili to say whether he had a meeting with Kelly Degnan after 24th of February and who was the initiator of that meeting. The letter of Kavelashvili, Subari and Khundadze was sponsored by FB pages სიახლეების ბლოგი • Blog News and GeoPress. 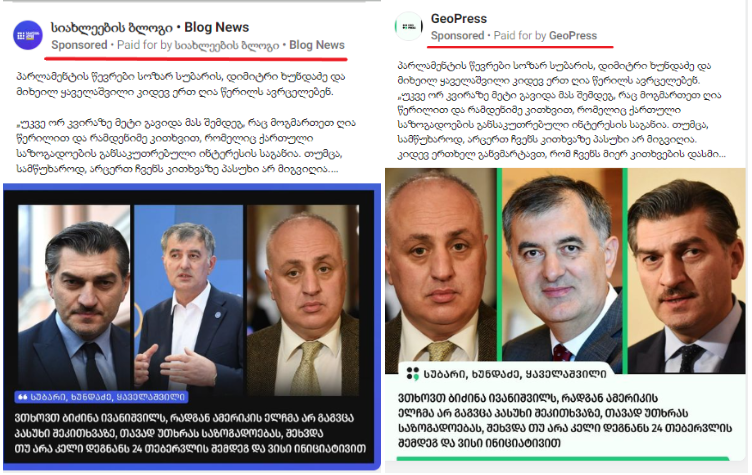 Earlier than Kavelashvili published the open letter on 28 June, the MPs that left Georgian Dream said in their joint statement that there were “great powers” that sought to destabilize Georgia. The statement of the former ruling party members was sponsored by the FB page Geopress. 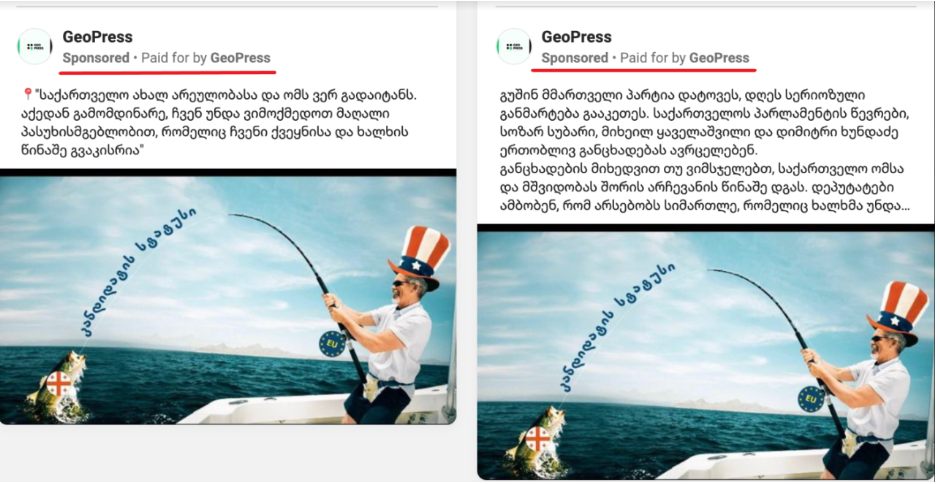 A Facebook post according to which “Georgia faces a choice between war and peace” was illustrated with a photo that showed a man wearing an Uncle Sam top hat, who had cast a fishing rod with the inscription “the status of candidate” into the water and hooked a fish that portrayed Georgia. According to the letter, “the topic of candidate status was a sort of ‘trap’ set for the Georgian government to walk into” while the aforementioned illustration portrayed the same where the rod, i.e. the EU, was handled by an American with Uncle Sam top hat. It should be noted that the letter with the identical illustration and title “war or peace – Georgia facing a dilemma” was published in several online media that pursue pro-government editorial policy (for.ge, infopostalini.com,  kvira.ge, ongo.ge, mpn.ge).

The Facebook page სექტა [Sekta] manipulatively asserted that the confirmation by Ivanishvili of the fact of meeting Degnan, was actually the confirmation of demand from the US Ambassador that Georgia engage in the war. 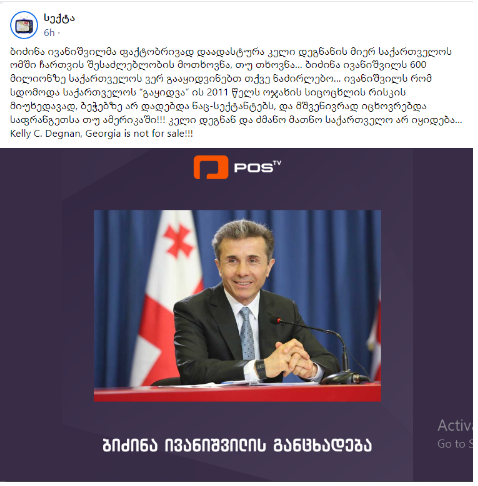 Vato Shakarashvili, a co-founder of the organization “Ai Ia,” commented on Bidzina Ivanishvili’s letter. His comment was published on FB pages არ აგარევინებთ,  არ აგარევინებთ • ar agarevinebt and აი ია [Ai Ia]. According to the comment, the US Ambassador’s request for a meeting with Bidzina Ivanishvili was interrelated with the aim to drag Georgia into the war. Shakarashvili’s comment published by Ai Ia was sponsored. 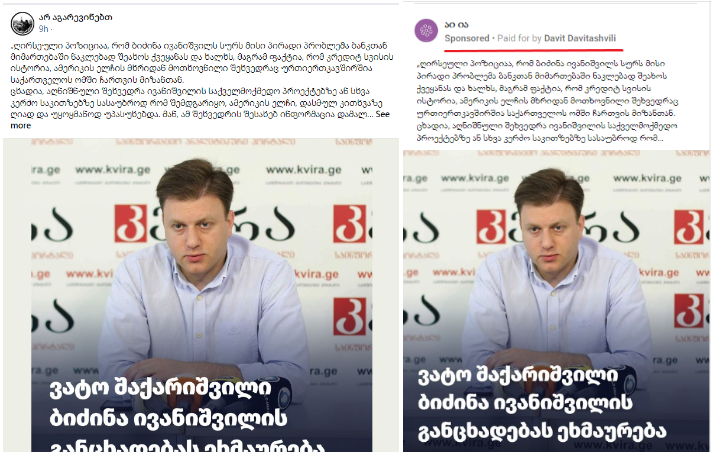 Earlier, the Facebook pages Blog News and GeoPress sponsored a letter by the Art Director of Rustaveli Drama Theater, Robert Sturua, in which Kelly Degnan was accused of having a desire to open a second front in Georgia. 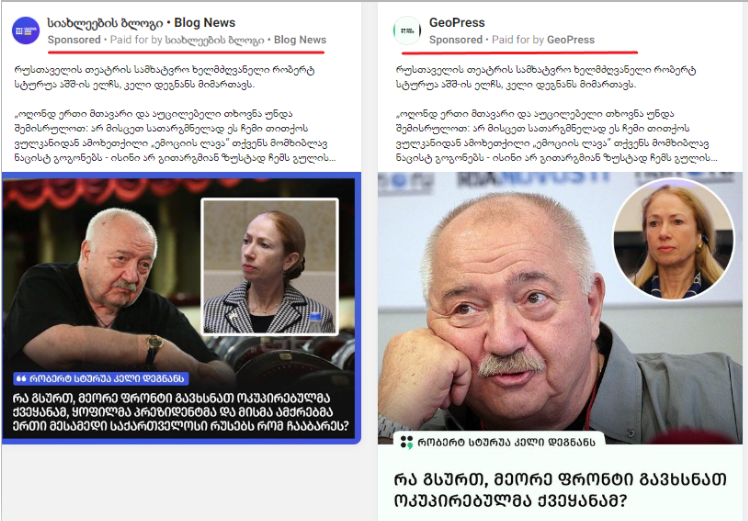 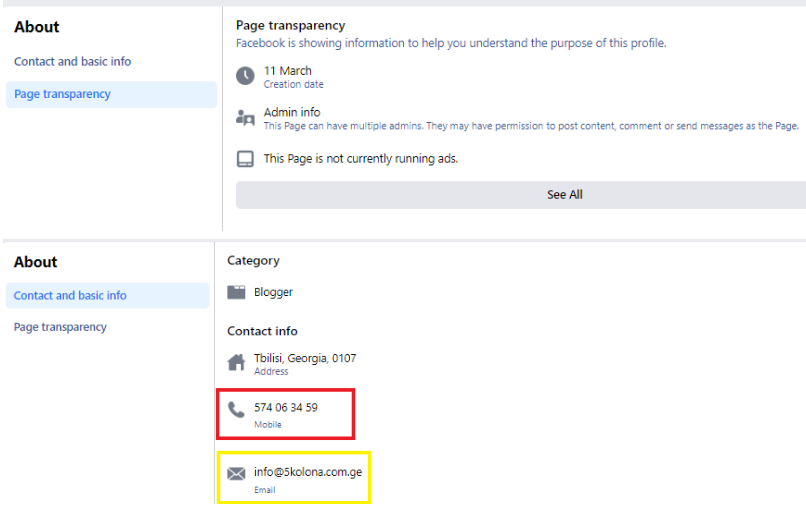 The webpage 5Kolona.com.ge was created on 7 March 2022 and its IP address is registered in Georgia, though as of now the page is inoperative which provides a ground to think that the webpage is indicated for the aim to meet transparency requirements of the Facebook.

It should be noted that over the period between 11 March and 21 July, the Facebook page published the total of 32 posts. All the 32 posts are sponsored and the amount of 100< is paid for each post. Apart from the US Ambassador, discrediting posts mainly targeted nongovernmental organizations (Transparency International Georgia, Economic Policy Research Center, Soros Foundation, Democracy Defenders, Shame Movement) and political opponents (Mikheil Saakashvili, Elene Khoshtaria). 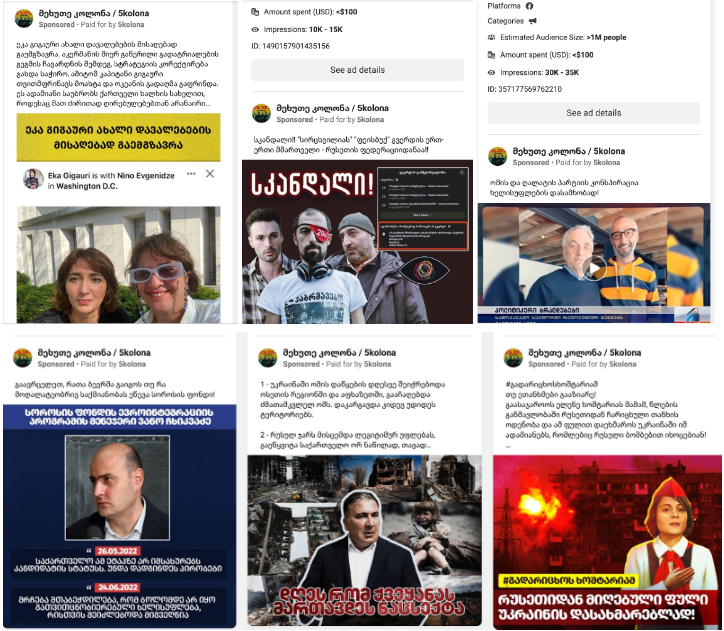 Geopress and Blog News. These Facebook pages, judging by their names, leave an impression of being news agencies. Geopress was created on 20 August 2021, while Blog News was created a little earlier, on 30 July 2021. The webpage http://blognews.ge/ of Blog News, shown in the section “About,” is inoperative and is indicated merely to meet transparency requirements of Facebook. These FB accounts were engaged in the campaign to discredit European MPs as well as the Ukrainian authorities.