Disinformation that Followed the Death of Queen Elizabeth II 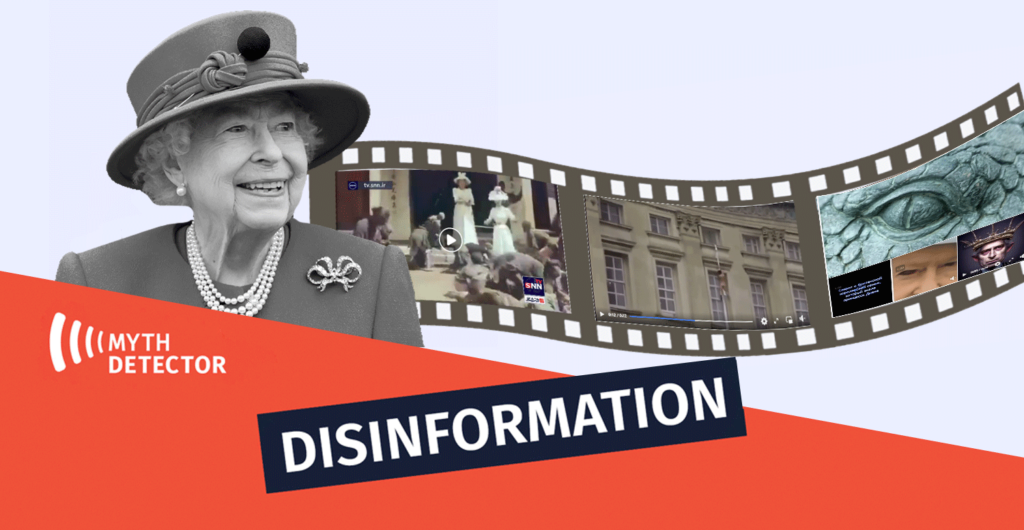 On September 8th, Queen Elizabeth II of Great Britain passed away. The monarch’s death was followed by the spread of various information and visual materials on social media.

Another video released at the same time as the Queen’s death shows a naked man falling from the balcony of Buckingham Palace. According to the description, the naked boy was trying to escape from the “nest of evil”. 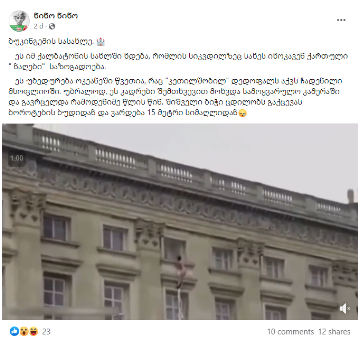 Facebook users actively shared photos and videos of the Queen (1, 2, 3, 4), showing her bloodshot eye, with one description claiming that the Queen was a reptilian and the embodiment of Satan. 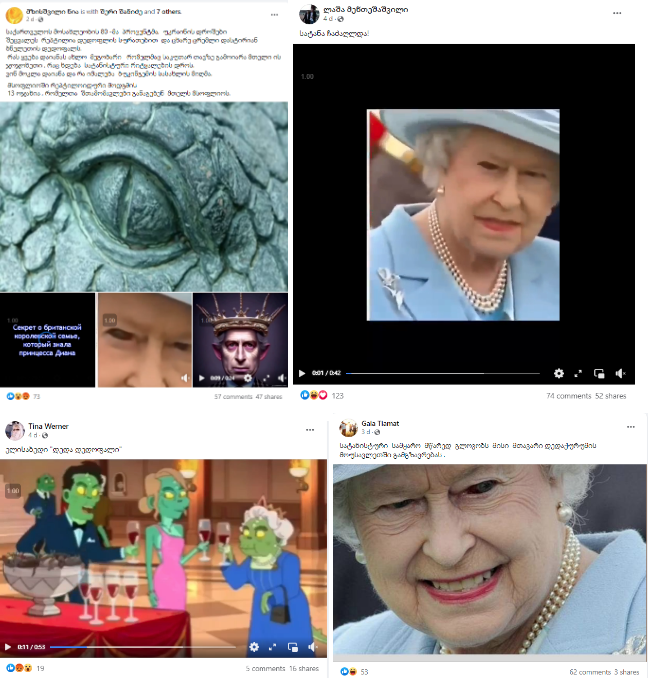 The claims circulating on social media since the death of Queen Elizabeth II are false and conspiratorial. In fact, 1) the video featuring women and children was filmed in Vietnam in 1899, 27 years before the Queen was born. 2) The shot of the man falling from Buckingham Palace is staged and is a promo video for the TV series “The Royals” 3) The claim that the Queen is a reptilian is a conspiracy theory.

The viral video allegedly shows Queen Elizabeth II throwing food at African children was, in fact, filmed in Vietnam in 1899, 27 years before the birth of Elizabeth II. Vietnam was a French colony at that time. A higher-quality colour version of the video was published on History Upscaled’s YouTube channel on February 11th, 2021, under the title: “1899 – Indochina, Vietnam – Women throwing coins for children to pick (Upscaled & Colorized).” 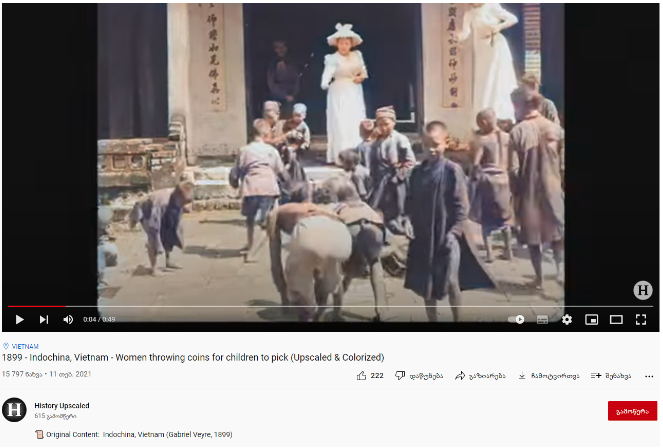 Gabriel Veyre is indicated as the original source behind the video. According to the description, Gabriel Veyre was a French photographer and director, and he took these shots in modern-day Vietnam of two French women throwing Chinese coins at Vietnamese children. According to the French publication Catalog Lumiere, the video was shot between April 28th, 1899 and March 2nd, 1900, and was shown in Lyon on January 20th, 1901, and the two women captured in it were Paul Doumer’s wife and daughter. Doumer himself was the President of France in 1931-32 and the Governor-General of Indochina in 1899-1902.

According to the description of the video second viral video, the footage shows a naked boy trying to escape from the “nest of evil” and falling to the ground in the process. The author of the post attributes this event to the Queen. The footage is actually one of the promo videos for E! ’s TV show “The Royals.” Therefore, the shots are not real and represent a work of fiction. 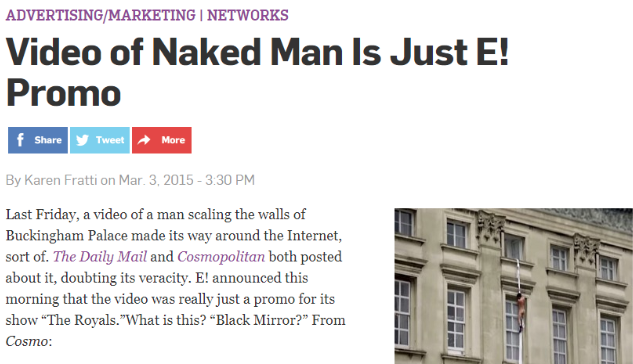 The Royals premiered on E! in 2015 and ran for 4 seasons. The TV series ended in August 2018. Back then, the video went viral a false description, as Internet users claimed that the video showed a 13-15-year-old boy trying to escape from Buckingham Palace. The video was fact-checked by Politifact analysts.

As for the red eye of the Queen, the photos and videos shared by social network users date back to 2012. In June 2012, Elizabeth II was attending a polo match when cameras caught her bloodshot eye. 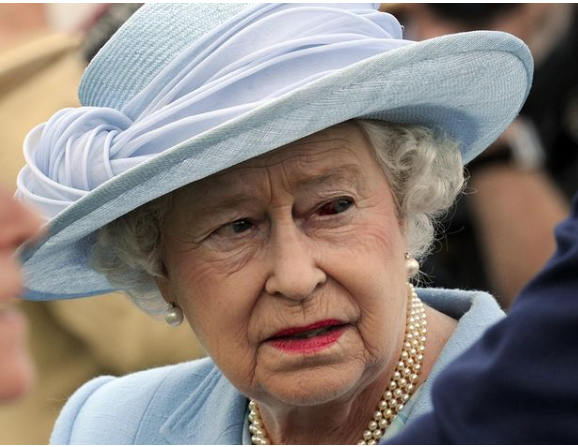 A spokesman for Buckingham Palace said at the time that the Queen was not in any trouble and was feeling well. The Queen was also spotted with red eyes in 2016 when the monarch was in Scotland. 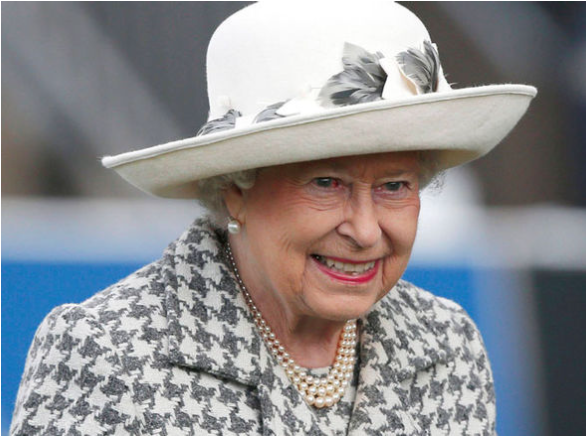 The publication Express.co.uk then wrote that the Queen had a subconjunctival hemorrhage. At such times, sneezing or even a minor injury to the eye may cause increased bleeding. The palace spokesman said that the Queen was feeling well and there was no danger.

As for the claims that Queen Elizabeth II was actually a reptilian, that claim is part of a recurring conspiracy theory. This conspiracy has been circulating since 1998, claiming the earth is ruled by reptiloid aliens and the world leaders are reptilians disguised as humans. At various times, followers of this theory have “exposed” the reptilian nature of Angela Merkel, Elon Musk and other famous people. Such conspiracy theories are baseless and have no connection with reality. For more information, see the “Myth Detector” articles: