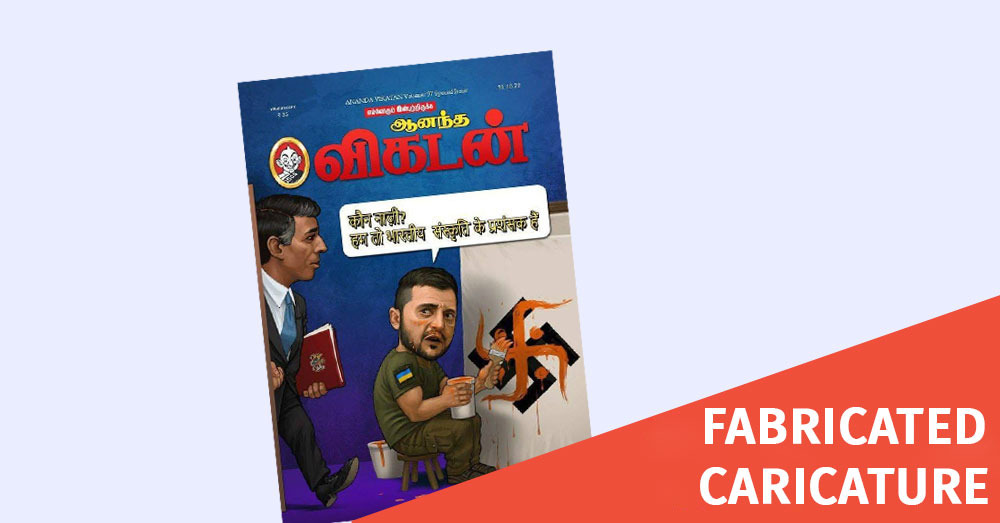 On November 1-3rd, Georgian and Russian-language (1,2,3,4,5) Facebook users have been circulating the cover of the Indian magazine “Ananda Vikatan”, depicting the Ukrainian President Volodymyr Zelenskyy and the Prime Minister of the UK, Rishi Sunak. The President of Ukraine is holding a can of orange paint and a brush, and in front of him is an orange swastika covering a black one. According to the attached description, Zelenskyy says the following to Sunak – “What kind of Nazis are we? We are simply fans of Indian culture!” 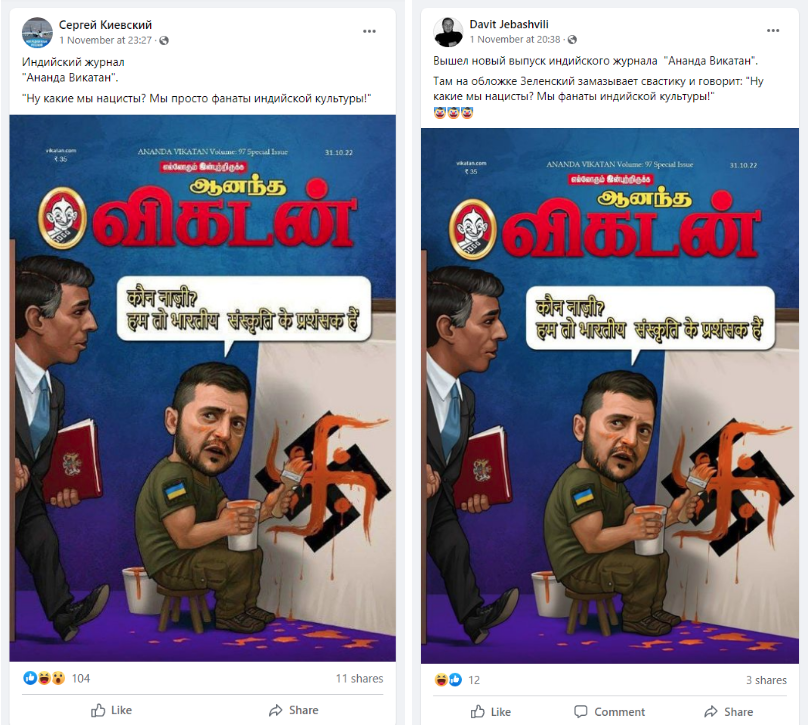 The Vikatan group is one of the largest associations in South India, which unites eight publications published in the Tamil language. A major weekly magazine named Ananda Vikatan has been published since 1928 and focuses mainly on entertainment and educational topics.

The photos disseminated on Facebook indicate October 31st as the release date of the publication. According to the official website of Vikatan, no issue of Ananda Vikatan has been published on that date, while neither Zelenskyy nor Sunak have been featured in any of the covers published within the last two months.

Notably, the covers of Ananda Vitakan mostly feature local celebrities, and no caricatures have been used on the covers of the magazine in 2022.

Throughout its existence, the Vikatan group has united more than twenty individual journals. As of October 2022, apart from Ananda Vikatan, the group owns 7 other active magazines, including Junior Vikatan, Aval, Pasumai, Nanayam, Sakthi, Motor Vikatan and Vicatan Plus. Among them, Motor Vikatan focuses solely on automobiles; Aval Vikatan on the topics and issues relevant to women; Pasumai Vikatan on agricultural issues; Nanayam Vikatan on business and financial matters, while Sakthi Vikatan deals with the issues of faith.

The covers of Junior Vikatan and Vikatan Plus feature caricatures more frequently.

The design of the disseminated photo is significantly different from the traditional cover design of Junior Vikatan. From November 2020 onwards, the design of the magazine was changed, and a coloured strip was added to the title and logo background in its upper part. In addition, the letters in the title have a black background, which creates a three-dimensional effect. None of these signs is found in the photos shared on Facebook. Not to mention, no issue of Junior Vikatan was released on October 31st.

As for Vikatan Plus, it is a new online edition. Its first issue was published on October 31st, while the second issue should be published on November 6th. Neither issues feature Zelenskyy or Sunak on the cover.

In the caricature, we see that Zelenskyy is trying to cover the black swastika with an orange one decorated with dots to hide the connection to Nazism.

The symbol of the swastika is not exclusively associated with Nazism per se and has been widely used in various cultures and religions for thousands of years, including Hinduism, Buddhism and Jainism. In addition to dots, the image may be decorated with other elements, or its direction may be changed. As for its meaning, in different cultures, it was considered a symbol of luck, fertility or the sun.

Fabricated caricatures about Zelenskyy and the war in Ukraine have been fact-checked by “Myth Detector” in the past as well. For more information, see: