Since the beginning of September, photos of the cover of the French satirical magazine “Charlie Hebdo” have been widely distributed on social networks (1, 2, 3, 4, 5, 6, 7, 8, 9, 10, 11). The caricature cover shows French President Emmanuel Macron trying to disperse the protesting fellow citizens with a water jet, calling them to go home. On the other hand, the French protestors answer the president that the water they are soaking in is warmer than the water they have at home. One can also see a caricature of the president of Ukraine with the body of a dog eating from a plate.

Identical information was disseminated in the Russian-language media as well (1, 2, 3, 4, 5). 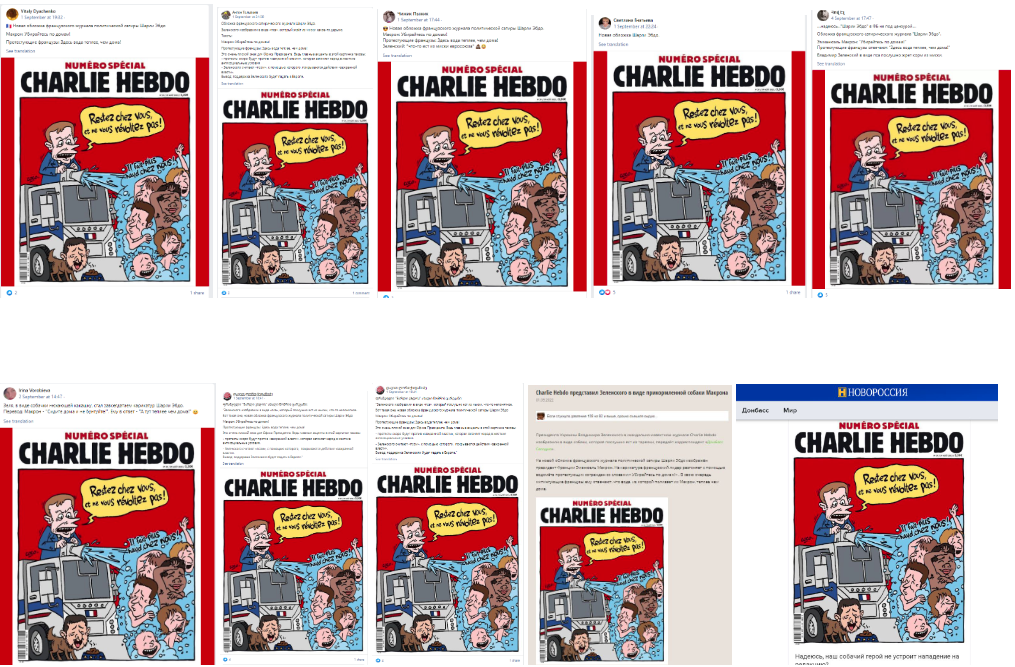 On September 19th and 20th, Russian and Georgian-language Facebook accounts (1,2,3,4) and online media (1, 2)  published a second photo of the cover of “Charlie Hebdo,” claiming that the cover of the magazine reflects the attitude of the West towards Zelenskyy. In addition, they mock the president for the mistake made by the Ukrainian embassy in Britain (Queer Elizabeth). 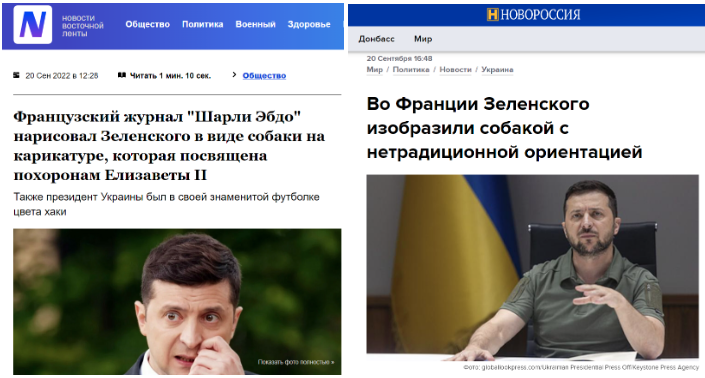 The first of the two covers circulating on social media, featuring Macron and Zelenskyy, indicates August 29th as the release date, while the second special issue was allegedly released on September 19th. Neither the catalogue of the official website of the French magazine, nor the official Twitter and Facebook pages of “Charlie Hebdo” features any of the above-mentioned covers.

The covers of the August and September issues of the magazine are as follows:

As for the special issues, the last special issue of “Charlie Hebdo” was released in June, featuring electric cars on its cover. According to a description posted on the magazine’s official Facebook page, readers will learn all about electric cars before they’re tricked.

Russian-language Facebook users have been disseminating fabricated “Charlie Hebdo” covers in the context of Ukraine in June as well. For more, see the article by “Myth Detector:”