Why does Ukraine Ban Soviet Symbolism and How does “Politicano” Manipulate with it? 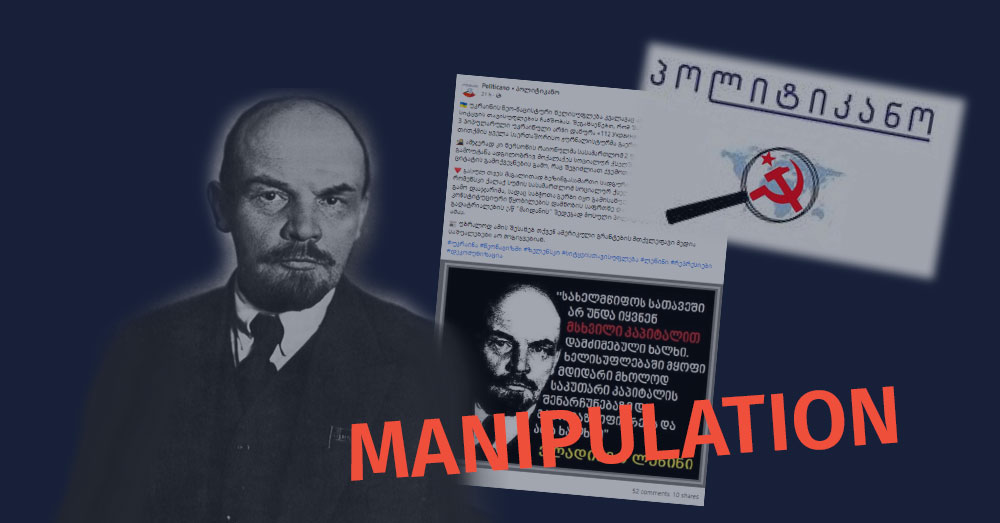 On February 10th, 2022, the Facebook page “Politicano” published a post about Ukraine, claiming that the “neo-Nazi government” of Ukraine continues to restrict freedom of speech in the country. The post states that last year the President of Ukraine, Volodymyr Zelensky closed 3 popular channels. This time, the Kherson District Court sentenced a citizen to 2 years of probation for publishing one quote from Vladimir Lenin. This quote from the Soviet leader is also featured in the post. The description also states that last month another Ukrainian citizen was found guilty and fined for “liking” a photo with a Soviet symbolic on a social network for an attempt to overthrow the constitutional order. 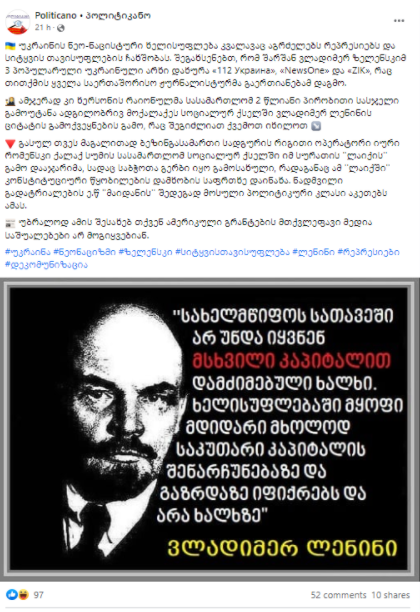 The post of “Politicano” is misleading and gives the impression that the Ukrainian government punishes only the users of communist symbols, and the same approach does not apply to Nazi symbols. In fact, the use of both symbols is punishable under Ukrainian law. The “Politicano” post does not state that one case was related to the systematic dissemination of Soviet symbols, and in the other case, to the call for the overthrow of the Ukrainian government. The closure of Newsone, ZIK and 122 Ukraine was linked to sanctions against their owner, a member of the pro-Russian political platform “Political Platform for Life,” in the context of the Russia-Ukraine war.

The post also describes the Ukrainian government as “neo-Nazi”, which gives the impression that the government is fighting only the symbols associated with the Soviet Union. In fact, the practice established by law also applies to Nazi symbols. For example, in July 2018, a case was launched in the Dnepropetrovsk region court against an organized group accused of making and distributing Nazi symbols.

The Ukrainian Rada passed the law banning both Nazi and communist symbols in April 2015. The law came into force in May 2015. Notably, the Venice Commission and the OSCE / ODIHR published a joint assessment of the law at the international level in December 2015.

Legal experts believed that while the law had a legitimate purpose, it was too broad and its use may have restricted freedom of expression.

As for some of the examples cited in the post, according to Politico, the regular operator of the gas station liked a photo of the Soviet logo in the social network Odnoklassniki, in which the court saw an “attempt to overturn constitutional order.”

In fact, the photo, which was liked by the mentioned person, contained a call for the overthrow of the Ukrainian authorities. The photo shows the flags of Russia, Ukraine and Belarus with Soviet symbols and also the caption: “Let’s overthrow the current regime in Kyiv! Only then will we be able to unite with Russia, Belarus and Ukraine on the principle of the Trinity. Whoever agrees, like and share. Our strength lies in unity.” 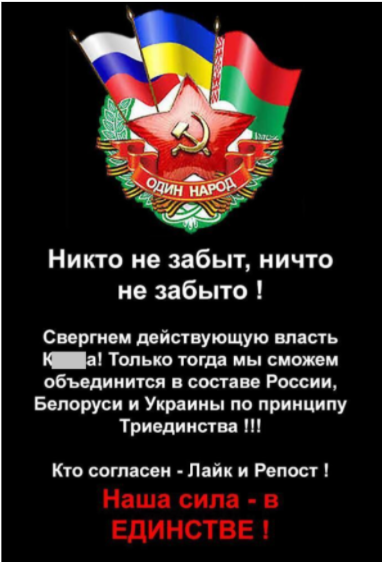 The photo liked by the operator of the gas station on the Russian social network, source: ok.ru

The dissemination of the call to overthrow the regime in Kyiv was considered by the Romensky District Court as a violation of Article 109, Part 2, which punishes making public statements or forcibly distributing materials aimed at forcibly changing the constitution, overthrowing or seizing state power. The court decision did not mention the coat of arms of the Soviet Union or its associated symbols.

The second case concerns the January 27th, 2022 judgment of the Chaplinsky District Court of Kherson Oblast. The court found a resident of the Kherson region guilty of violating the law “On condemning the communist and National Socialist (Nazi) totalitarian regimes in Ukraine and banning the propaganda of their symbols.” According to the court decision, the citizen systematically posted symbols related to the Soviet Union, photos and quotes of USSR leaders on his own account of the Russian social network Odnoklassniki for 3 years. The citizen pleaded guilty and stated that he did not know if this type of activity was prohibited.

Notably, since 2017, Russian social networks and sites, including Odnoklassniki, Vkontakte, Yandex and Mail.ru, have been blocked in Ukraine. In 2017, by the decision of the then president, Petro Poroshenko, access to these sites was restricted for 3 years. The current President of Ukraine, Volodymyr Zelensky, has extended this restriction until 2023. Access to these sites from Ukraine is prohibited, although the restriction does not provide for the punishment of those who enter the sites anonymously or through VPN services from the territory of Ukraine.

The decision to block Russian websites in Ukraine was assessed by an international human rights organization Article 19 as a restriction on freedom of expression.

As for the closure of Newsone, ZIK and 122 Ukraine, Volodymyr Zelensky decided to impose sanctions on TV owner Taras Kozak in February 2021, which led to the suspension of his television broadcasting license. A spokesman for the president explained that the above-mentioned broadcasters were restricted for the sake of national security.

Iulia Mendel, Zelensky’s spokesperson: “These media have become one of the tools of war against Ukraine, so they are blocked in order to protect national security,” adding that evidence had emerged of their being funded from Russia.”

The owner of the TV stations is Taras Kozak, a member of the pro-Russian party “Political Platform – for Life” and a member of the Verkhovna Rada. According to leaked documents released by the Organized Crime and Corruption Reporting Project (OCCRP), Kozak is one of the Ukrainian politicians and businessmen who make money selling Russian oil. According to the documents, Kozak owns one of the Arctic oil fields through an offshore company.

Notably, Zelensky’s decision to shut down the TV broadcasters was criticized by the UN Human Rights Monitoring Mission in Ukraine, which expressed concern over restrictions on freedom of expression. According to them, the state should seek to counter disinformation, but should use a balanced approach to avoid unfair restrictions on freedom of expression.

It is essential to note that, for example, the Kremlin’s propaganda media was banned from broadcasting in some Western countries as well. For example, on February 2nd, 2022, Germany banned the broadcasting of the German-language Russia Today. The channel was banned in 2020 by Lithuania and Latvia. In 2020, the Kremlin Media Sputnik office was closed in Estonia as well. The imposition of sanctions by the Baltic states on the Kremlin’s propaganda media was linked to the imposition of sanctions by the European Union on their leader, Dmitry Kiselyov. The decision by Lithuania and Latvia was criticized by Reporters Without Borders. Russia Today was banned in Ukraine after the annexation of Crimea in 2014.

Notably, “Politicano” has been suspected of spreading manipulative information in the past as well, when it tried to portray Ukraine as a supporter of Nazism. After Russia began mobilizing troops along Ukraine’s borders, Politico published and sponsored a number of posts to discredit Ukraine. For more on this topic, see the materials prepared by “Myth Detector”:

The Facebook page Politicano is a medium with links to Yevgeny Primakov Russian-Georgian Civic Center. The Center was founded by the Gorchakov Fund, established under the Russian President’s decree, and the Georgian Institute for International relations.

Politicano positions itself as a left-wing outlet, invoking Euro-Atlantic skepticism and portraying the colonial past of Europe as modern reality. At the same time, the page denies the Russian and Soviet occupation.

Politicano also denies the responsibility of Russia in the 2008 August War and often spreads anti-Western narratives, claiming that apart from Russia, Georgian territories are occupied by other states as well.