Who Spreads the Disinformation about the Evacuation of the Civilians and the Military from Azovstal? 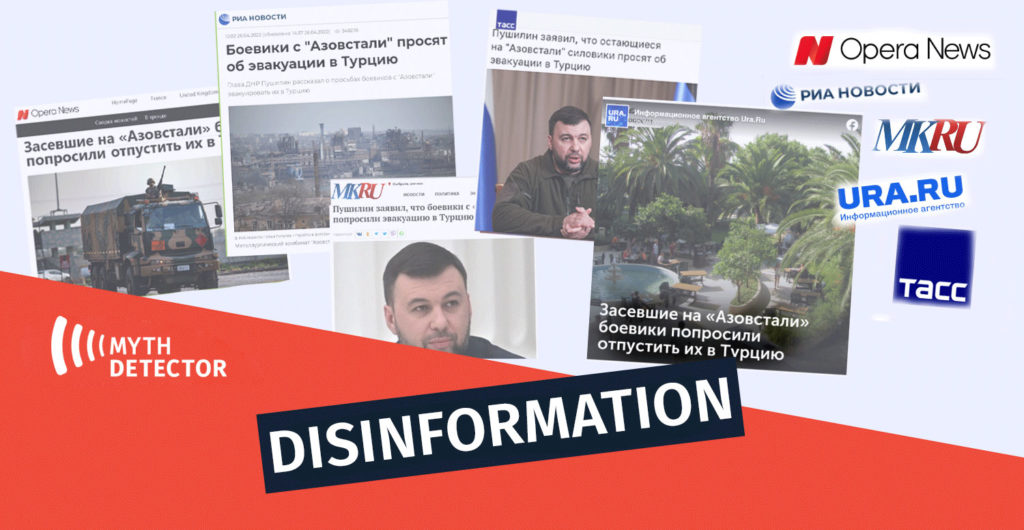 On April 27th, 2022, Nana Devdariani, the member of the Alliance of Patriots of Georgia party, spoke about the bunker of the Azovstal factory in Mariupol, Ukraine, and stated that even though the corridor is open since April 25th, evacuation still does not happen.

Nana Devdariani, Alliance of Patriots: “This corridor has been open since Monday and for some reason no one can get out [of the Azovstal bunker] and is this accidental? There is a reasonable suspicion that among the servicemen in the Azovstal bunkers there are also high-ranking Western servicemen, and they do not want to reveal that these foreign servicemen are involved in the conflict in Ukraine. That is the whole problem.”

On April 27th, similar information was published by the Facebook and web pages of the Russian news agency Ura.ru and on the website of РИА Новости. The post alleged that the “militants” besieged in Azovstal demand that they be released in Turkey. The source of the information is Denis Pushilin, the separatist leader of the occupied Donetsk region. Pushilin told Russian state media TASS that the reason for this was the distrust of those in Azovstal towards official Kyiv. Attached to the post is a photo depicting one of the recreational areas in Turkey. 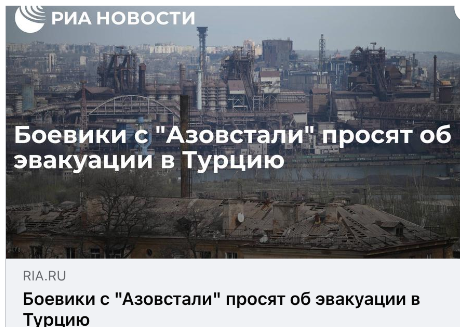 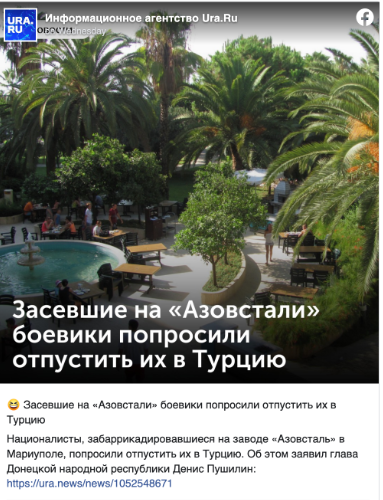 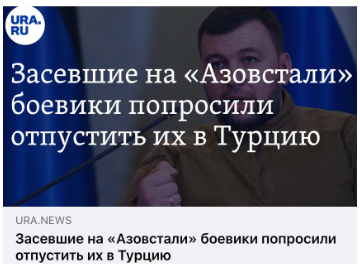 The claim that the corridor for the evacuation of the population and military personnel from Azovstal is open is false. On April 25th, Ukrainian authorities stated that there was no agreement to open a humanitarian corridor and that the corridor opened unilaterally by Russia was unsafe. The claim that the fighters in Azovstal are demanding their transfer to Turkey due to distrust of their own government is also false. In fact, they cited a lack of trust in Russia as the reason.

Information about the opening of a humanitarian corridor for the evacuation of the population from Mariupol on April 25th was disseminated by the Russian authorities, although this decision was unilaterally announced by Russia. Ukrainian vice-Prime Minister Iryna Vereshchuk responded to the statement by saying that no agreement had been reached with Russia on the evacuation of civilians from the Azovstal plant.

According to Vereshchuk, Ukraine has asked UN Secretary-General António Guterres to initiate and guarantee the evacuation of civilians from Azovstal.

Notably, Russia has opened similar “humanitarian corridors” in the past in the Kyiv and Kharkiv regions as well, although the population could only leave in the direction of the territory of Belarus and Russia. Citizens transferred from Mariupol to Russia claim that they were transferred to the so-called filter camps, after which they were forcibly relocated to various regions of Russia, including Siberia. Satellite images show that about 5,000 people in Russia are housed in a temporary camp in Bezimenne, east of Mariupol. According to the Ukrainian side, without coordination with official Kyiv, Russia transferred 40,000 people to its occupied territory. The deportation of civilians by the warring parties to their own territory is a violation of human rights.

The information disseminated by Russian news agencies based on a representative of the separatist forces that the fighters in Azovstal demanded to be transferred to Turkey because they do not trust their own government is also false. In a video address to world leaders, Serhiy Volyna, commander of the 36th Ukrainian Marine Brigade, called on world leaders to evacuate civilians and wounded from Azovstal with the involvement of a third party. He also mentioned that he will not repeat the mistake made by others and trust guarantees given by Russia about a safe corridor, because Russia will break its promise and open fire. “No one believes Russians.”- states Volyna.

Volyna later spoke to Turkish media asking Turkish President Recep Tayyip Erdogan to take part in the evacuation. It should be noted that Turkey plays the role of mediator between Ukraine and Russia and held several meetings in Istanbul as part of the peace talks.

Donetsk eastern region governor Pavlo Kyrylenko said Russia was blocking the evacuation of wounded Ukrainian fighters from Mariupol because it wanted to capture them.

Pavlo Kyrylenko, governor of the eastern Donetsk region: ” They (want to) use the opportunity to capture the defenders of Mariupol, one of the main (elements) of whom are the… Azov regiment. Therefore the Russian side is not agreeing to any evacuation measures regarding wounded (Ukrainian) troops.”

According to Kyrylenko, Russia is also trying to prevent the opening of humanitarian corridors in the Donetsk region as well.

Notably, the post of the Russian news agency about the request for evacuation in Turkey, uses a photo showing “ozkaymak incekum,” a 5-star hotel in Antalya. The agency has also used the same photo in an article about the Russian singer’s vacation in Turkey. The content and photo of the post give the impression that the besieged fighters in Azovstal are asking to be transferred to Turkey for personal purposes and comfort. Hence, the post is aimed to discredit them.

The agency has published a number of posts to discredit the Ukrainian authorities and fighters.