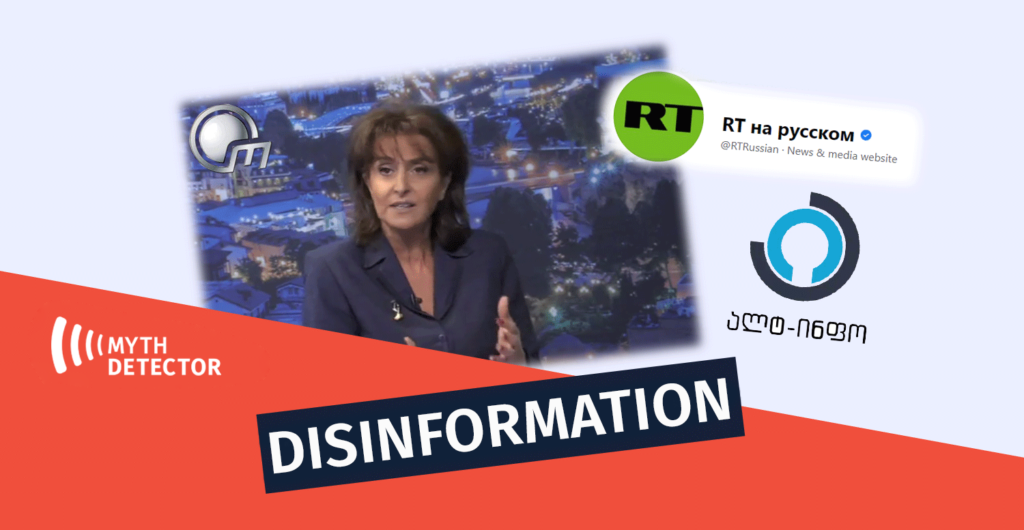 On March 9th, the news agency “RT на русском” reported that the authorities in Kharkiv warned the population that there was no humanitarian corridor, when in fact, Russia has been ceasing fire at 10:00 for several days in a row to allow evacuation of civilians from the war zone.

Notably, similar message has been voiced by the local pro-Kremlin actors. Namely, on March 7th, while speaking about the humanitarian corridors, “Alt-Info” host Shota Martinenko claimed that the Ukrainian government uses civilians as human shields and does not allow them to go to Russia and Belarus just to protect themselves.

Shota Martinenko: “They are just using population as human shields there, and that is the only real tactic of their defense, because if there were no civilians in Mariupol, for example, the Ukrainian forces there would have been put in a very difficult situation.”

On the same day, Irma Tskhoragauli, a member of the pro-Kremlin “Alliance of Patriots of Georgia” party, claimed that Ukraine refuses to use the peace corridors and uses the civilian population near Mariupol as a shield. On March 7th, a Facebook “Lela Praga” claimed that the Ukrainian government had taken women and children hostage in Mariupol, Kherson, and Kharkiv, and would not allow them to go to safe areas offered by Russia.

The claim that Ukraine uses the population as shields and does not allow them to leave the conflict zone is false. On March 6th, Russia violated its ceasefire commitment, forcing Ukraine to delay the opening of humanitarian corridors.

Since the beginning of March, Ukraine has appealed to the UN and the International Red Cross three times to help the people affected by the hostilities and activate the so-called “Green Corridors”. As early as March 3rd, during the second round of talks with the Russian side, Ukraine and Russia agreed to a temporary cessation of hostilities and the evacuation of civilians through humanitarian corridors. According to the agreement reached between Russia and Ukraine on March 3rd, the population living in the conflict zone was given the opportunity to leave Mariupol and Volnovakha through humanitarian corridors. Within 3 hours of the announcement of the evacuation process on March 6th, Russia violated the ceasefire agreement, and local officials had to delay the opening of humanitarian corridors, as residents could not leave the area peacefully without a ceasefire.

According to Ukrainian media, only 400 people were evacuated from the city of Volnovakha, as Russian troops resumed bombing of Volnovakha. Due to the violation of the ceasefire agreement by the Russian military, the evacuation was re-scheduled for the second day, March 6th. On March 6th, the Azov Regiment in Mariupol announced that a second attempt to set up a “green corridor” for Mariupol residents in the evening had failed as Russia opened fire again.

On March 7th, the Russian side announced it would open humanitarian corridors in Kyiv, Kharkiv, Sumy and Mariupol. Russia offered to evacuate residents of the Kyiv region to Belarus and then to Russia, while civilians from Mariupol, Kharkiv, and Sumy had to be evacuated to the Russian cities of Taganrog and Belgorod. The Ukrainian authorities rejected the routes offered by Russia and demanded the opening of other routes (from the Kyiv region to Lviv Uzhgorod and Ivano-Pankovsky, Mariupol-Zaporozhe, Volnovakha-Perkovsky, Sumy-Poltava, from Izium (Kharkiv Oblast, Kharkiv Oblast) In Lviv, Uzhgorod and Ivano-Frankivsk).

On March 8th, under the agreement between Ukraine, Russia and the International Red Cross, the first evacuation corridor was opened in Sumy. Initially, evacuation from Sumy was possible with only 1 route, in the direction of Poltava. Under the agreement, the corridor would be operational until 9 PM. Also on March 8th, Deputy Prime Minister and Minister of Reintegration Iryna Vereshchuk announced that the humanitarian corridor Mariupol-Zaporozhe, Energodar-Zaporozhe, Volnovakha-Pokrovsky, Izium-Lozova would be opened.

At the same time, Russian media reported that Ukraine was refusing to open humanitarian corridors for the residents of Kharkiv and Sumy.

Mikhail Mizintsev, Head of Russia’s National Defense Control Center: “Instead of helping to evacuate civilians from the war zones, the Kyiv radicals are doing everything possible to prevent the evacuation of civilians to safer places.”

According to Ukraine’s Minister of Social Policy Marina Lazebna, the creation of humanitarian corridors was hampered by Russian troops on the ground, who continued to bomb civilian infrastructure. According to the President of Ukraine, Volodymyr Zelenskyy, Russia was deliberately creating a humanitarian crisis in the conquered cities, blocking the Ukrainian “green corridors” and forcing the local population to leave for the Russian Federation.