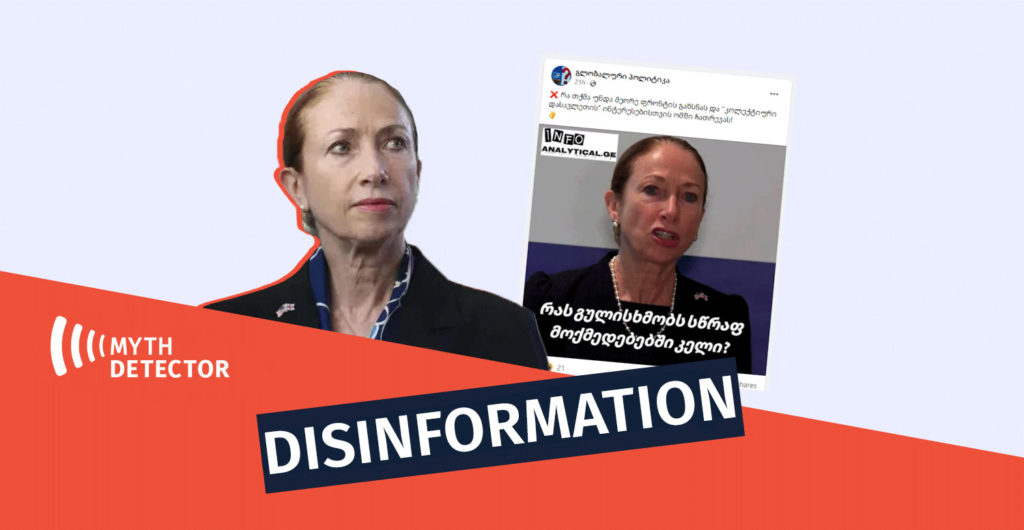 On June 29th, the Facebook page “Global Politics” published a photo of Kelly Degnan with the following caption: “What did Kelly mean by moving through quickly?” A description is attached to the photo, according to which “moving quickly” means the opening of a second front and the involvement of Georgia in the war with Russia. 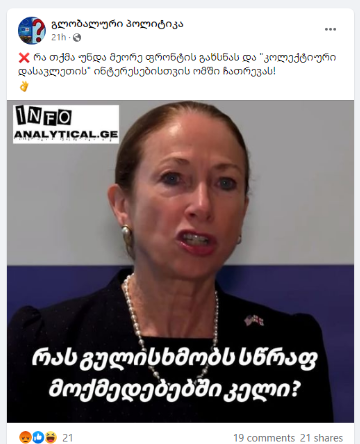 The claim that Kelly Degnan’s statement implies the opening of the second front in Georgia is false. The US ambassador mentioned “moving through quickly” in the context of the implementation of the recommendations of the European Council on June 29th while talking to journalists.

Kelly Degnan spoke about the need for quick actions on June 29th after the meeting dedicated to renewable energy by the “United States Agency for International Development” (USAID):

“Well, we know the government can move very quickly when it wants to pass legislation. We’ve seen that in the expedited legislation last December to abolish the State Inspector Service; you saw it most recently with the expedited legislation on expanding surveillance capacity. So, we know the government can move quickly when it wants to. And we know the people of Georgia want these reforms to move through quickly so that Georgia can be ready for European Union membership status.”

The US ambassador also noted that many stakeholders: people, civil society, opposition parties and some members of the government are ready to start implementing these recommendations, and everyone wants to see a very positive report on Georgia by the end of the year. Degnan also expressed the readiness of the United States to help Georgia in this process.

Kelly Degnan has stressed a number of times that the US does not intend to involve Georgia in the war, calling the claim Russian disinformation.

Messages as if the United States and European countries want to drag Georgia into the Russia-Ukraine war and open a second front in the country, have been fact-checked by the “Myth Detector” in the past as well. See our articles: