Palavandishvili Seeks to Protect the Georgian Government from the EU 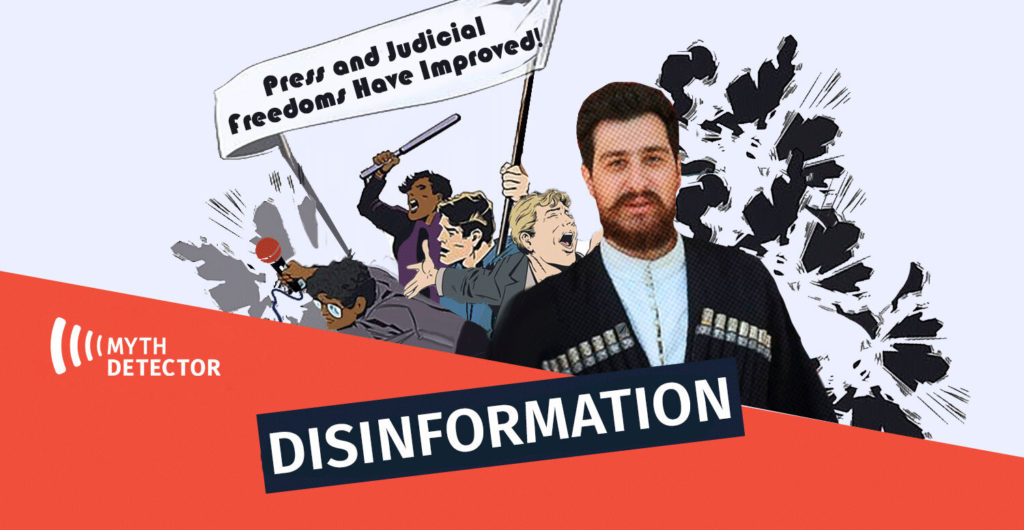 On June 14th, 2022, during the Alt-Info program “Commentary of the Day”, Alexandre Palavandishvili spoke about the June 9th resolution of the European Parliament and Georgia-EU relations, noting that the Georgian Dream only deviated from the Western course when it refused to open a second front and hold an LGBT parade in the country. Palavandishvili claimed that more or less progress is observed in terms of corruption, media freedom or the level of crime. According to Palavandishvili, there is no regression in terms of media and judicial freedom.

Alexandre Palavandishvili: “What did the Georgian Dream not do? Tell me, which Western instruction it did not fulfil? We are indeed shamefully leading in terms of implementing the Association Agreement, Sodomy or implementing any other law, and in matters of economics directly, aren’t we? … The only thing we have not done is that we have not opened a second front and the parade has not taken place yet. Since the parade has not been held yet and we are not engaged in war, that’s why we turned away from the pro-Western course. What else? Has the judiciary worsened since Misha? Has corruption increased? Did crime increase, or did the degree of media freedom decrease? We see progress in everything, more or less? At least there is no regression, is there?”

The claim of Alexandre Palavandishvili is manipulative and contains a number of erroneous provisions. The resolution of the European Parliament criticizes the government for restricting freedom of the media, the rule of law, the freedom of the judiciary, the protection of fundamental human rights, and Bidzina Ivanishvili’s destructive control over the government. Palavandishvili assertion that Georgia is not experiencing a setback in terms of media freedom and corruption is false, as evidenced by international ratings.

The resolution does not speak openly or covertly about Georgia’s possible involvement in any conflict. In the Ukrainian context, the resolution only expresses concern about the rise of Russian disinformation in Georgia and also criticizes the government’s position on Western sanctions.

Despite the claims of Alexandre Palavandishvili, the European Parliament resolution primarily criticizes the Georgian government for its media freedom issues. Notably, the resolution itself is called “on violations of media freedom and the safety of journalists in Georgia.” In addition to the media, the criticism also concerns the rule of law, the independence of the judiciary, the government’s attitude towards sanctions against Russia, Russian disinformation and the role of Bidzina Ivanishvili.

The Resolution of the European Parliament – Criticism of media freedom

In terms of media freedom, the resolution presents various factual information and criticizes the government for a number of reasons.

The European Parliament notes in a resolution that Georgia’s position in the Reporters Without Borders International Press Freedom Index has deteriorated from 60th to 89th. In addition, the resolution talks about specific facts, including the attack on journalists on July 5th, 2021, the unfounded investigation of their cases, the alleged surveillance of journalists by the security service, the detention of Nika Gvaramia on suspicious charges, and more.

The resolution also mentions other forms of pressure on the media, including the verbal abuse of journalists.

The resolution of the EP: “whereas the number of verbal assaults on journalists and the number of defamation lawsuits, including those launched by government officials and individuals associated with the ruling party, against critical media representatives and companies have been increasing;

Not to mention, the European Parliament emphasizes the role of the Public Defender in the freedom of the media, and the resolution stresses that the government often targets Nino Lomjaria.

In addition to the issues of media freedom, the resolution addresses issues of the rule of law and the protection of fundamental human rights, highlighting significant violations and problems. In contrast to Palavandishvili’s statement, this section discusses other important facts besides the July 5th events.

The resolution expressed concern about the independence of the judiciary in the context of Nika Gvaramia, stating that there is constant distrust of the Georgian judiciary. The European Parliament calls on the government to carry out a genuine reform of the court to make it independent and impartial.

The resolution of the EP: “Condemns the sentencing of Nika Gvaramia, the director of the main pro-opposition TV channel Mtavari, on 16 May 2022, which has highlighted the persistent mistrust in Georgia’s judiciary system; endorses the call by Reporters Without Borders for a review of Nika Gvaramia’s conviction; emphasises, once more, the urgent need for the government to genuinely advance reform of the judiciary through a broad and inclusive cross-party process with the aim of increasing the independence and impartiality of the judiciary, in line with commitments taken as an associated partner of the EU.”

The resolution also deals with wiretapping and surveillance, calling on the authorities to conduct an effective investigation into the incident and to put in place appropriate mechanisms to ensure that data collection is overseen more democratically.

The European Parliament also emphasizes the health condition of President Saakashvili and the importance of his release so that Mikheil Saakashvili can receive proper treatment.

These issues are also mentioned in the summary of the resolution. The European Parliament reiterates its call on the authorities to uphold the highest standards of democracy, the rule of law, judicial independence and fundamental freedoms.

The resolution of the EP: “Calls on the Georgian authorities to resolutely uphold the highest standards of democracy, the rule of law, judicial independence, fair trials and fundamental freedoms, including in the area of media freedom, and thereby unambiguously demonstrate their political determination to actualise the ambitious European aspirations of the people of Georgia.”

The deterioration in the above-mentioned issues is also reflected in the Freedom House Index. If in 2017 Georgia had 64 points in the mentioned index (100 – the highest score), in 2022, the score was reduced to 58 points. Freedom House research covers essential issues such as the electoral process, political pluralism and involvement, the functioning of government, civil liberties – freedom of religion and expression, the rule of law, freedom of the judiciary, the protection of personal autonomy and individual rights, and more.

In terms of the judiciary, the Freedom House study addresses issues that hinder the court from functioning independently. The report states that judicial reform is underway, although the situation remains problematic.

Freedom House: “Despite ongoing judicial reforms, executive and legislative interference in the courts remains a substantial problem, as does a lack of transparency and professionalism surrounding judicial proceedings.”

The resolution of the EP: “Urges all Georgian political actors to refrain from exploiting Russian disinformation attempts to target their respective political opponents, as this only contributes to the further spread of disinformation and endangers social cohesion and democracy.”

The statement by US Ambassador Kelly Degnan that the attempt to involve the United States in Georgia’s war is 100% Russian disinformation is of utmost importance in this regard.

Kelly Degnan:  “When I hear people say that the United States is working against Georgia or trying to drag Georgia into the war or open a “second front,” that is a hundred per cent Russian disinformation. That is absolutely not true. Even before hostilities broke open, the United States was the country that was working hardest to prevent this war from happening. We absolutely do not want to see Georgia dragged into this war.”

Kelly Degnan made the statement after Georgian Dream members and affiliates began talking openly that the West wanted to involve Georgia in the war and open a second front line.

The amendment of the resolution that concerns the negative role of Bidzina Ivanishvili is also important. The EU Parliament is concerned about the fact that Ivanishvili exerts control over the government in the form of persecution of its political opponents and journalists. The resolution calls the role of Ivanishvili destructive and expresses concern over his links to the Kremlin.

The resolution of the EP: “is deeply worried by Ivanishvili’s exposed personal and business links to the Kremlin, which determine the position of the current Government of Georgia towards sanctions on Russia; calls on the Council and democratic partners to consider imposing personal sanctions on Ivanishvili for his role in the deterioration of the political process in Georgia”.

The claim of Alexandre Palavandishvili that state corruption has improved since 2012, but it is noteworthy that in recent years, Georgia is still experiencing a setback in this regard.

Transparency International publishes an annual report on the Corruption Perceptions Index. According to which, although the situation in Georgia deteriorated after 2012 in 2013 (from 52 to 49 points), the country has made progress in this direction until 2018.