What are the COVID-19 vaccine ingredients and how is Dulles linked to the WHO and Вечный зов? 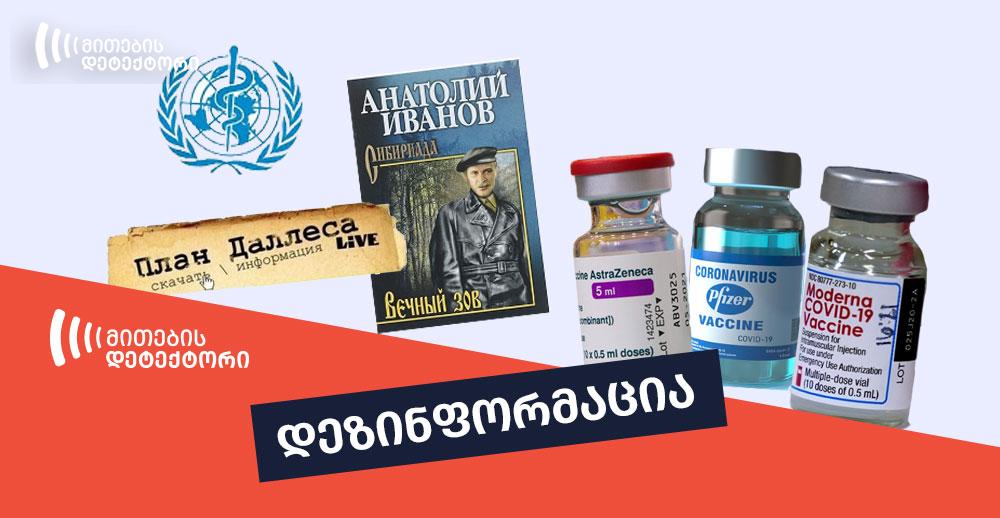 On March 12, Father Pilipe Abashidze published a post on his Facebook account discussing vaccine ingredients without specifying the manufacturing company. The post claims that the vaccine contains MRC-5, pulmonary cells from the aborted embryo. Moreover, according to Pilipe Abashidze, it also contains cattle fetus and virus found in monkeys that causes cancer.

According to the post, the World Health Organization was established by the former CIA director Allen Dulles, the post also cites a quote that the author attributes to Dulles: ” We will debauch all physically and spiritually. Instill all sorts of filth into your children; they wouldn’t be able to hide from us. We will instill our filth in every sphere starting from kindergartens”!.

Identical text citing Father Pilipe Abashidze was published by the editor of the magazine “Kvakutkhedi” Khatuna Saginashvili and anti-vaxxer Shore Shanidze as well. 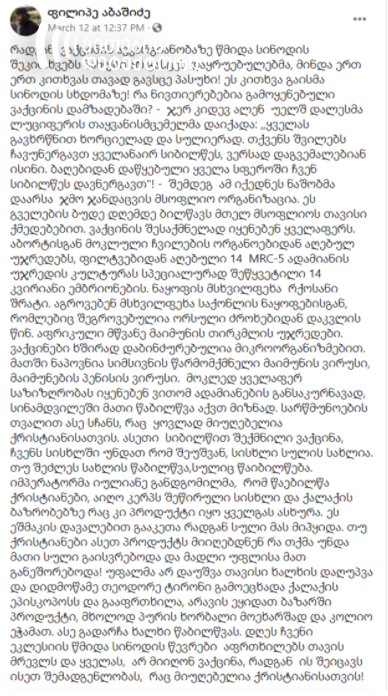 Information alleging that Dulles brothers established the Who is false and was initially voiced by a Russian physicist. The WHO was actually established in 1948 as an initiative of U.N. member-states.

Vaccine ingredients and mechanism of action.

Father Pilipe Abashidze doesn’t specify which vaccine he’s speaking about, however since currently there are three COVID-19 vaccines widely used and authorized by the WHO or other reliable regulatory agencies such as European Medicines Agency, we will review the ingredients of AstraZeneca/Oxford, Pfizer and Moderna vaccines.

Ingredients of the AstraZeneca vaccine are publicly accessible for everyone. One dose of vaccine contains: 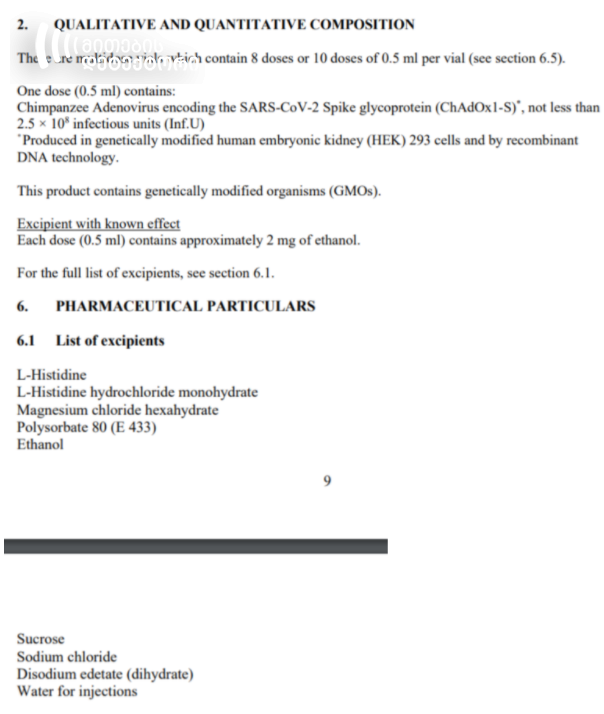 AstraZeneca vaccine ingredients have become the subject of manipulation more than once due to the spread of the misinterpreted use of Chimpanzee Adenovirus and embryonic cells. The fact is Chimpanzee Adenovirus technology used for the AstraZeneca vaccine is well-studied and has been used to develop various vaccines such as Ebola, Hepatitis C, etc, for a long time now. Claim that it causes cancer is false. This is a harmless, weakened adenovirus that usually causes the common cold in chimpanzees. AstraZeneca vaccine is a viral vector-based vaccine and is based on instructions for building so-called spike proteins stored in double-stranded DNA. The vaccine developed with this technology stimulates a strong immune response and has storage and transportation advantages since it does not require special conditions or very low temperature. Moreover, vector viruses are stripped of the genes that might harm people, adenovirus can enter cells, but it cannot replicate inside them.

As for the aborted embryonic cells, HEK-293 cell lines have been used even earlier in the development of other vaccines and not only AstraZeneca. It’s necessary in the pre-clinical studies to determine the impact of vaccines on human cells. Human aborted embryonic cells were isolated in the 1970’s, however, the abortion was voluntary and didn’t occur for study purposes. Afterward, cells were replicated in the lab and present studies are also based on the replicated cells, thus studies do not require new aborted embryo. Moreover, AstraZeneca or other vaccines themselves do not contain those cells; they are only used in the production, after which vaccines are purified to remove the cell culture materials.

Pfizer and Moderna vaccines belong to the group of nucleic acid-based vaccines, particularly, those are RNA vaccines, where the instructions on creating viral antigen are encoded. It means that, unlike traditional vaccines, instead of weakened virus or viral cells, the body is injected with messenger RNA (mRNA) that does not enter the cell nucleus and breaks down as soon as information is transmitted. RNA vaccines instruct our cells how to produce so-called spike proteins or protein fragments that will stimulate an immune reaction in our body.

Pfizer and Moderna have similar ingredients:

The above-listed lipids form an oily shell around mRNA and help it enter the cells.

As ingredients of all three vaccines show, Father Pilipe Abashidze’s claim about cattle fetus and cancerous virus found in monkeys is an absurd statement.

Read more about vaccines in the previous publications prepared by “Myth Detector”:

Allen Dulles didn’t establish the WHO

In the post, Pilipe Abashidze also formulates a conspiracy alleging that the World Health Organization aims to debauch people; he also writes that the former CIA director Allen Dulles established the WHO, which is false information previously fact-checked by Myth Detector. Among clerics, Davit Isakadze and Spiridon Abuladze were the ones who have disseminated the false information about the link between the Dulles brothers and the WHO. Such statement originates from the speech of Russian physicist Mikhail Kovalchuk who spoke about this topic during the International Military-Technical Forum “Army 2020” in Moscow.

As for the following quote “We will debauch all physically and spiritually. Instill all sorts of filth into your children; they wouldn’t be able to hide from us. We will instill our filth in every sphere starting from kindergartens”!, Father Pilipe Abashidze doesn’t cite the source, while such quote of Allen Dulles cannot be found in open sources.

A similar quote about the perversion of children belongs to Officer Polipov, one of the characters of Soviet novel Eternal Call (Вечный зов), and has been known as Dulles Doctrine conspiracy for years now disseminating in Georgian and Russian conspiracy sources.