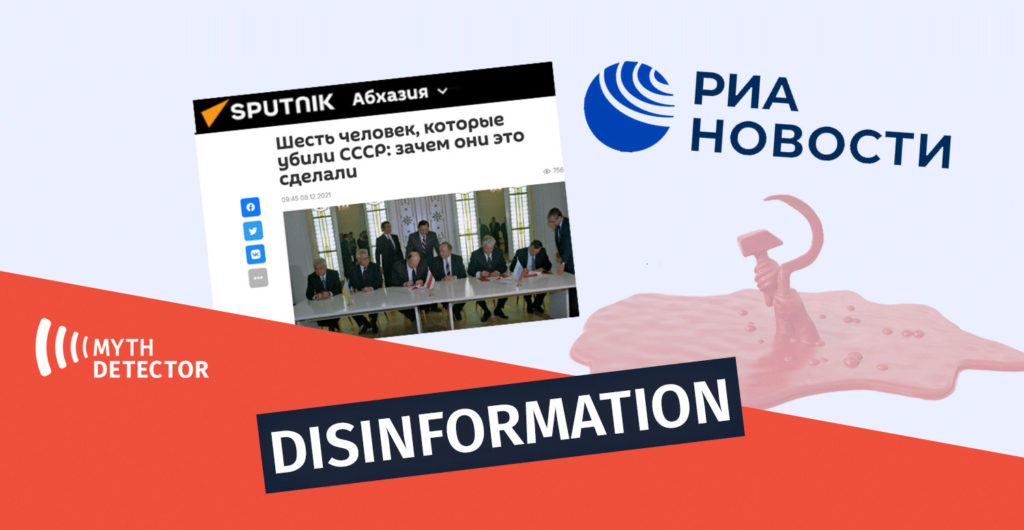 On December 8th, the Russian state-run Sputnik Abkhazia published an article by Vladimir Kornilov, author of RIA Novosti, entitled: “Six People Who Killed the Soviet Union: Why They Did It.” Kornilov notes that one of the world’s greatest geopolitical catastrophes occurred 30 years ago – “Our united force – the Union of Soviet Socialist Republics – was disintegrated.” The article asserts that the Belovezh Accords was signed on behalf of Russia, Ukraine and Belarus by people who had no legal authority; hence the decision to dissolve the Soviet Union was made illegally and against the will of the people, which was clearly expressed in the March 17th, 1991 referendum. 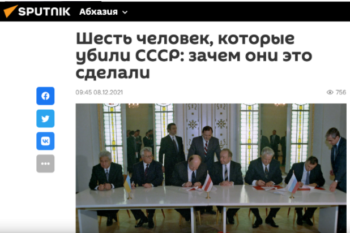 Kornilov asserts that the referendum in Ukraine had nothing to do neither with democracy nor the rule of law and was conducted in violation of procedures and laws, as the law on “procedures for resolving the secession issue from the Soviet Union” should have taken place at least six months after the decision, while the referendum in Ukraine was conducted after only three months. Kornilov also claims that unlike the March referendum, when the positions of both pro and against-independence parties were equally covered in the newspapers, the anti-independence campaign in Ukraine was completely banned, and no one but Crimea and Donetsk could express a negative response. Kornilov claimed that at the time, no one in the West was bothered by this, even though the 2014 Crimean referendum was called illegal for the same reasons.

Kornilov manipulates the facts and disseminates false information. In fact, the referendum held in Ukraine in December 1991 was not illegal. By the time the parliament had already declared independence, Ukrainian laws had stood above the Soviet Union laws. In addition, the referendum revealed that the population of both Crimea and Donetsk, as well as more than 50% of the ethnic Russians living in Ukraine, supported independence. As for the March referendum, it did not express the will of the citizens of the Soviet Union, as 6 out of 15 countries boycotted it, while in Ukraine, the questions were worded differently and did not include keeping the Soviet Union in its actual form as an option. The claim that the Soviet Union disintegrated “without losing a single war” is also false.

The referendum on the independence of Ukraine, which took place on December 1st, 1991, was scheduled on August 24th of the same year by the Parliament of Ukraine. The referendum had an 84.18% voter turnout, and 92.3% supported independence. The claim that the question in the bulletin was worded differently and that it was impossible to give a negative answer to it is not true. The text of the bulletin was as follows: “Do you support the Act of Declaration of Independence of Ukraine?” The question was followed by two potential answers: “Yes, I support” and “No, I do not support.” 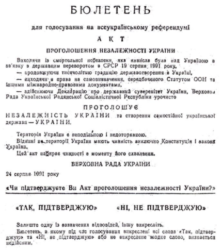 Notably, in Crimea and Donetsk, the regions mentioned by Kornilov, 54.19 and 83.90% of the participants supported the independence of Ukraine. It is also noteworthy that 55% of ethnic Russians participating in the referendum living in Ukraine were in favour of secession.

The claim that the positions of both supporters and opponents were equally covered before the March referendum, while the situation was different during the December referendum, is manipulative. Ahead of the referendum on March 17th, the Soviet government used its control over the media to influence the electorate and achieve high turnout and the desired result. The central Soviet media often covered Gorbachev’s speeches in which he argued for the republics to remain in the Soviet Union. Gorbachev’s main argument was that the collapse of the Soviet Union would have devastating consequences for the 75 million people living in the Soviet Union. Despite claims by the Soviet central government that all political forces had an equal opportunity to express their views, the opinion of opponents of the referendum was very rarely covered by the central media, with journalists pointing to increased censorship and pressure.

In Ukraine, both supporters and opponents of the referendum were implementing intensive political campaigns. In this case, too, the opposition had almost no access to Republican television and conveyed its position primarily through newspapers and brochures.

As for the referendum held on March 17th, 1991used by Kornilov to claim that the collapse of the Soviet Union was against the will of people. Noteworthy, he did not name any important factors that cast doubt on this assertion.

For instance, Kornilov’s article does not mention the information that the referendum was boycotted by 6 of the 15 countries of the Soviet Union: Georgia, Armenia, Estonia, Lithuania, Latvia and Moldova. Some of them soon held their own referendums:

As for Moldova, only 28% of voters took part in the referendum held by the Soviet government on March 17th, 1991, which is considered a boycott.

Notably, the referendum questions differed from republic to republic, and in Ukraine, for example, it asked two questions: “Do you consider it necessary to maintain the union of the Soviet Socialist Republics as a renewed federation, where equal sovereign republics are united, and the rights and freedoms of individuals of any nationality are fully guaranteed?”, To which 71.48% of respondents answered in the affirmative, to the second question, which appeared only in the Ukrainian referendum: “Do you agree that Ukraine should be part of the Union of Soviet sovereign states on the basis of Ukraine’s declaration of sovereignty?” 81.7% of the participants gave a positive answer. Consequently, the claim that Ukraine supported the preservation of the Soviet Union in its current form during the March 1991 referendum is false.  Notably, in both the above-mentioned six republics, as well as in western Ukraine, part of the population boycotted the referendum, which is why the percentage of opponents is lower than it actually was.

The claim that the Soviet Union dissolved “without losing a single war” is false. One of the reasons for the weakening of the Soviet Union and its subsequent collapse was the defeat experienced in Afghanistan. The 9-year military campaign had a severe economic and military impact on the USSR. Shortly after the withdrawal of Soviet troops, the government they supported fell. According to the information recognized by the Soviet Union, a total of 14,453 Soviet servicemen were killed in the war. However, other sources estimate a total of 26,000 deaths. The failure in Afghanistan has shaken the Soviet Union’s reputation both abroad and in its member republics and is seen as one of the reasons for its collapse.

A significant blow to the Soviet economy was delivered by the involvement in the Cold War and the rivalry with the United States over military armaments. Among other factors, military spending was one of the reasons for the economic stagnation of the Soviet Union and the significant slowdown compared to the US military development.

The Kremlin propaganda has always used the shared historical memory as one of the tools to influence the post-Soviet countries.

False and manipulative information about the collapse of the Soviet Union has been voiced a number of times in the past as well. For more details on this topic, see the materials published by “Myth Detector”: