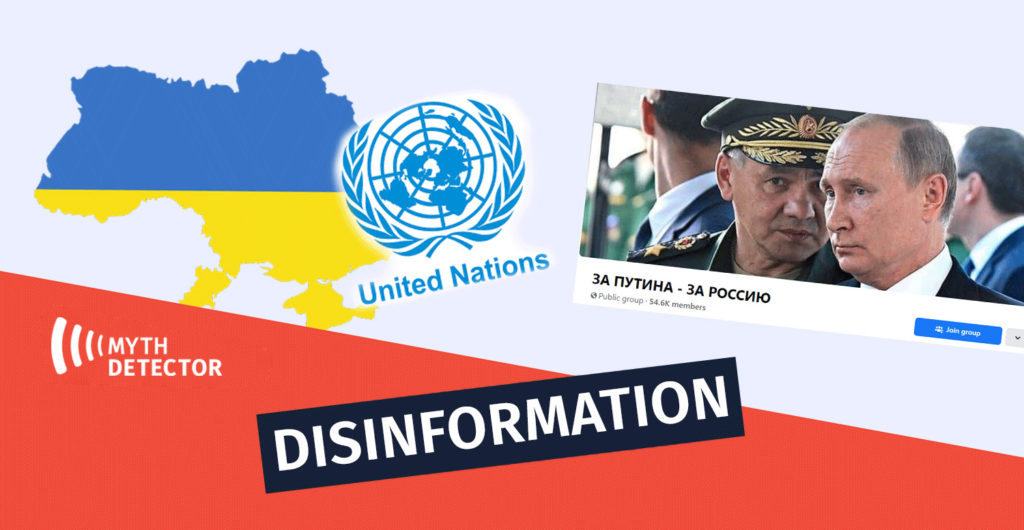 On February 26th, the Facebook user “Сергей Тимаков” published a post stating that Ukraine does not exist as a country since Ukraine has no officially recognized borders, and this addressed by former UN Secretary-General Ban Ki-moon back in 2014. The user further claimed that the territory of Ukraine, according to the CIS document, remains the administrative region of the Soviet Union, and according to the Budapest Memorandum, the country has no borders at all. Accordingly, the author of the post concludes that accusing Russia of violating Ukraine’s territorial integrity is impossible.

On February 27th, an identical text was shared by Facebook user Виктор Бусаргин in the public group “ЗА ПУТИНА – ЗА РОССИЮ/,” accumulating more than 200 shares and up to 700 likes.

After marking the information as false, “Myth Detector” revealed additional 53 accounts, which have been distributed the identical text in a coordinated manner, claiming that Ukraine’s borders are not registered with the UN; therefore, Russia has not violated the international law. “LiveJournal,” the origin of this disinformation, has also been identified. The outlet was spreading the disinformation as early as May 2014, in the context of Russian military intervention in Crimea. 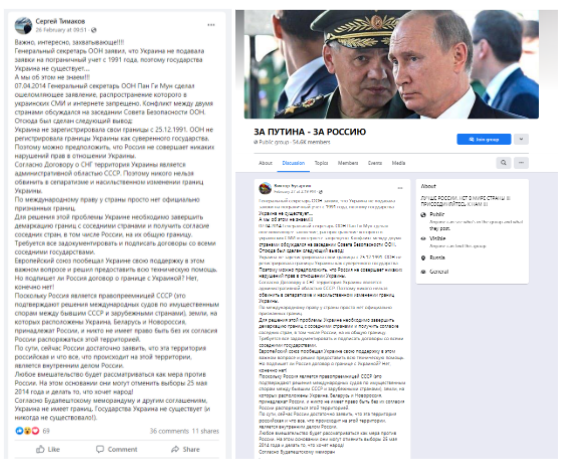 The posts contain a total of 4 false allegations. In fact: 1. The existence of Ban Ki-moon’s statement of that kind cannot be confirmed by any open source. 2. Ukraine is a full member of the United Nations, and its borders are internationally recognized. 3. CIS documents do not mention Ukraine as an administrative unit of the Soviet Union. 4. The Budapest Memorandum also confirms the sovereignty and territorial integrity of Ukraine.

1. The alleged statement of the UN Secretary-General Ban Ki-moon cannot be found in open sources.

According to the disseminated post, the former UN Secretary-General stated that Ukraine had not applied for border registration since 1991; hence Ukraine did not exist as a state.

A similar statement by the UN Secretary-General cannot be found in open sources. The UN General Assembly has adopted a number of resolutions in support of Ukraine’s territorial integrity, such as the UN General Assembly resolution of 27th March 2014, condemning attempts to undermine Ukraine’s national unity and territorial integrity and calling on all countries not to recognize the status of the Autonomous Republic of Crimea and the city of Sevastopol.

Ukraine ratified the UN Charter as early as 1945. The charter was signed by three entities from the Soviet Union – the Ukrainian SSR, the Russian SSR and the Belarusian SSR. Since gaining independence, Ukraine has had a permanent representative in the organization.

2. The claim that the borders of Ukraine are not officially registered is false.

The Russian-language posts have claimed that Ukraine does not have officially recognized borders under international law. According to the posts, to solve this problem, Ukraine must complete the demarcation of the border with neighbouring countries and get consent on the common border from its neighbours, including Russia.

“Ukraine has not registered its borders since December 25th, 1991. The UN has not registered the borders of Ukraine as an independent state. Therefore, we can assume that Russia is not violating any rights against Ukraine. ” – claim the Russian social media users.

Notably, the process of registration of state borders is not among the responsibilities of the UN. Neighbouring countries do this through bilateral agreements. The post’s author supposedly talks about the delimitation of borders, which entails concluding a legal agreement on borders. Ukraine has border agreements with all its neighbours. The border agreement between Russia and Ukraine was signed on January 28th, 2003, and ratified by the Ukrainian side on April 20th, 2004.

3. The claim that the territory of Ukraine is an administrative region of the Soviet Union under the CIS agreement is false

The posts further assert that according to the CIS agreement, the territory of Ukraine remains an administrative region of the Soviet Union.

The Commonwealth of Independent States (CIS) was established on December 8th, 1991, by the Belovezh Accords, and as the name implies, it unites independent entities. The agreement was signed by the Russian Federation, the Republic of Belarus and Ukraine and indicated the following:

The Belovezh Accords:  “[The parties] intend to develop their relations on the basis of mutual recognition and respect for state sovereignty, the inalienable right to self-determination, the principles of equality and non-interference in internal affairs, the renunciation of the use of force, economic or any other methods of pressure…“

Notably, Ukraine could not possibly join the CIS as an administrative unit, as a few months earlier (August 24), the country had already declared independence.

4. The claim that Ukraine has no borders under the Budapest Memorandum is false

The concluding part of the disseminated posts asserts that according to the Budapest Memorandum and other agreements, Ukraine has no official borders; the state of Ukraine does not exist and has never existed.

The Budapest Memorandum of Understanding on Security Assurances was signed on December 5th, 1994, between Ukraine, the United States, the Russian Federation, and the United Kingdom – in which Ukraine agreed to give up its nuclear weapons in exchange for security guarantees. In the agreement, Ukraine is referred to as a sovereign state; for instance, in the second paragraph, we read:

The Budapest Memorandum: “The Russian Federation, the United Kingdom of Great Britain and Northern Ireland, and the United States of America reaffirm their obligation to refrain from the threat or use of force against the territorial integrity or political independence of Ukraine, and that none of their weapons will ever be used against Ukraine except in self-defence or otherwise in accordance with the Charter of the United Nations.”

Hence the claim that Ukraine has no official borders under the agreement is false.