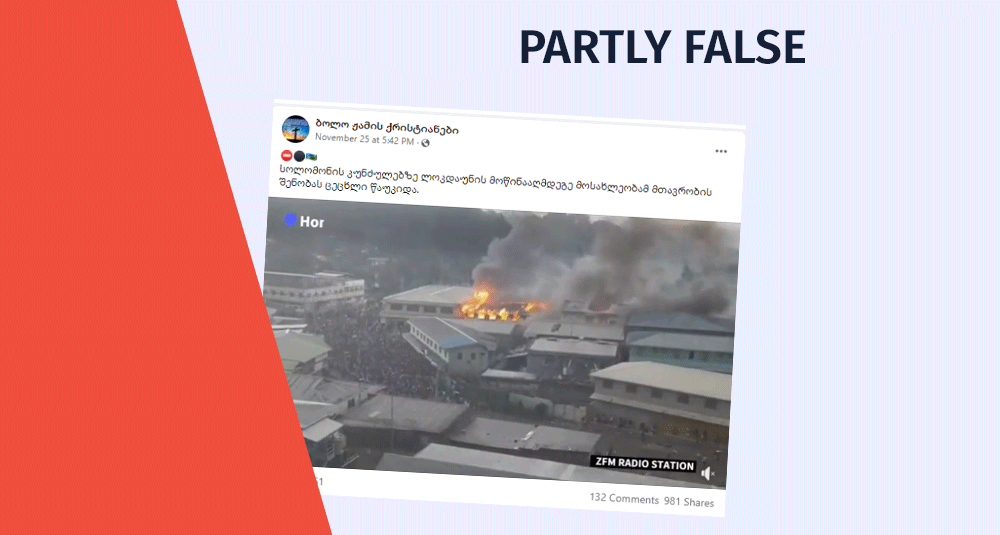 On November 25th, the Facebook account “Bolo Zhamis Kristianebi” [Christians of the Last Advent]” published a video showing a building on fire. The post claimed that on Solomon Islands, as a form of protest, people who are against the lockdown set fire to government buildings. As of Decmeber 2nd, the post has accumulated more than 700 likes and 1100 shares. 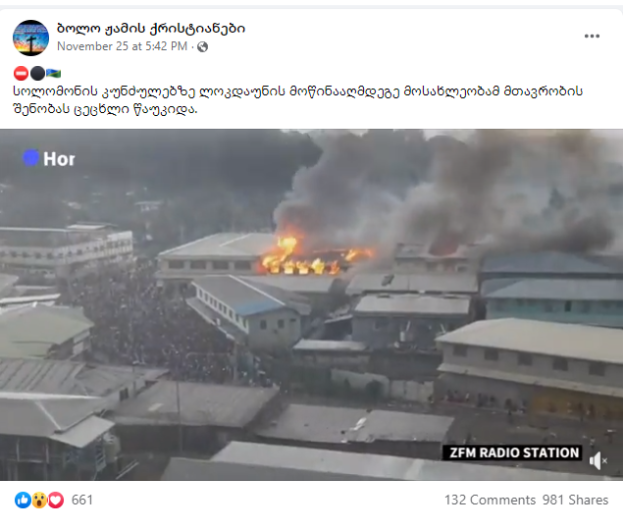 While the protest began peacefully, it quickly transformed into violence. The causes of the crisis include youth unemployment, dissatisfaction with anti-coronavirus measures, inter-island rivalries and a dispute over whether the Solomon Islands should have changed the diplomatic recognition from Taiwan to China. The protesters demand prime minister Sogavare to resign. The Parliament building was set on fire and several dead bodies were found in Honiara’s Chinatown. To tackle down mass looting and restore peace, the government imposed curfewsand invited peacekeepers from Australiaand Fiji. Curfewswere not an anti-Covid19 measure, but the means to restore the security in the town.

Following the civil war, the communist-led People’s Republic of China (PRC) was established in Beijing in 1949. Additionally, the nationalistic and democratic movement, Kuomintang,  remained in control over the Taiwan Island and established the Republic of China (ROC). PRC does not recognise the sovereignty of ROC and exerts diplomatic pressure on the other countries not to recognise the independence of ROC. With the rise of PRC economic, political and military influence the PRC’s position strengthened. Amid the 70th anniversary of PRC Solomon Islands decided to switch allegiances from ROC to PRC in 2019. This decision has stirred the geopolitical balance in the region.

The Solomon Islands consist of numerous islands. The most important are Guadalcanal Island, where the capital Honiara is located, and Malaita island. There is a rich record of violence between two islands. Particularly violent was the  end of the 1990s when a four-month state of emergency was declared amid intra-state armed conflict. Malaita Island is heavily funded by the USAand Taiwan to contain the expanding influence of PRC in the Pacific region. On the other hand PRC exerts most of its influence on the Guadalcanal Island, where the government buildings are located. The interplay between two superpowers stirred the unhealed wounds between the islanders.

While the government introduced several Covid-19 policies limiting the leisure activities and cultural events, it never imposed an intra-state lockdown. Additionally, the country introduced a travel ban, suspending all international passenger flights from April 2020 to November 2021. Noteworthy, the policy had a substantial impact on the nation’s economy that heavily relies on tourism. Noteworthy, according to the WHO data Solomon Islands reported only 20 cases of Covid-19 and 0 deaths. The vaccination rate is 25.7 percent.

Under the bilateral security treaty between Solomon Islands and Australia, the government invited Australian police and military forces to help restore peace and security. The prime minister Sogavare was not ousted from power. At the time of writing, some businesses are reopening and the situation can be described as fragile peace.

There is no reliable data on the extent of Covid-19 related job losses since many people work in the informal sector. The Solomon Islands do not have official unemployment statistics. The Central Bank of Solomon Islands estimated 8.68% of formal jobs were lost. However, it is important to note that in 2019 tourism accounted for 12.8% of GDP and tourism stalled for more than a year and a half. Thus it is safe to assume that many people were deprived of income due to the tourism crackdown. Although Covid-19 policies did indirectly contribute to the economic hardships, reducing the violence only to Covid-19 policies is a misleading oversimplification.