On July 1st, 2022, the Facebook page of PostTV published information about the article prepared by the French publication “Resistance Republicaine” about the French politician and member of the European Parliament, Raphaël Glucksmann, and the third president of Georgia, Mikheil Saakashvili. The same information was covered by “Imedi TV”, and the video of the story was published on the Facebook page of the channel. According to the media outlets, in addition to highlighting Saakashvili’s crimes, the French publication also declares that Glucksmann should be in prison as Saakashvili’s accomplice. Notably, “Imedi” also published the same information on its website, although, the mentioned material is no longer available on the page. 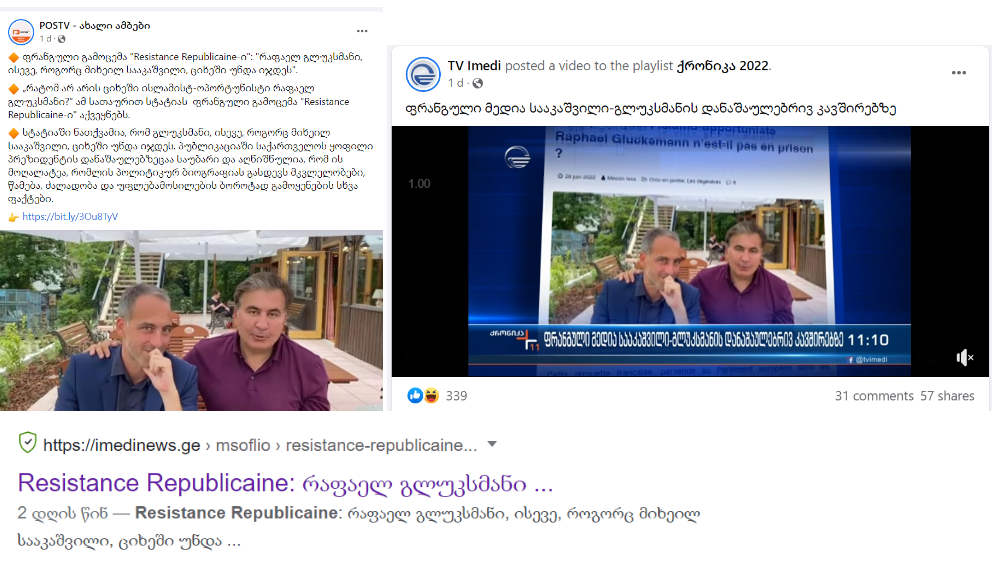 The article about Raphaël Glucksmann was published in the French outlet “Resistance Republicaine” on June 26th. Until then, on June 24th, Glucksmann responded to the decision of granting the EU membership candidate status to Ukraine and noted that no nation has ever deserved EU membership more than Ukraine. Earlier, Gharibashvili called an article published in the famous French publication Le Figaro an “article ordered by Glucksmann, which had the following title: “Georgia moves away from the European Union to return to Moscow’s orbit.”

“Myth Detector” studied the French outlet, which media outlets with pro-governmental editorial policies relied on when publishing information about Raphaël Glucksmann and Mikheil Saakashvili. As a result of the research, the following has been identified:

According to the information indicated on the website of “Resistance Republicaine,” Christine Tasin holds the position of editor-in-chief. 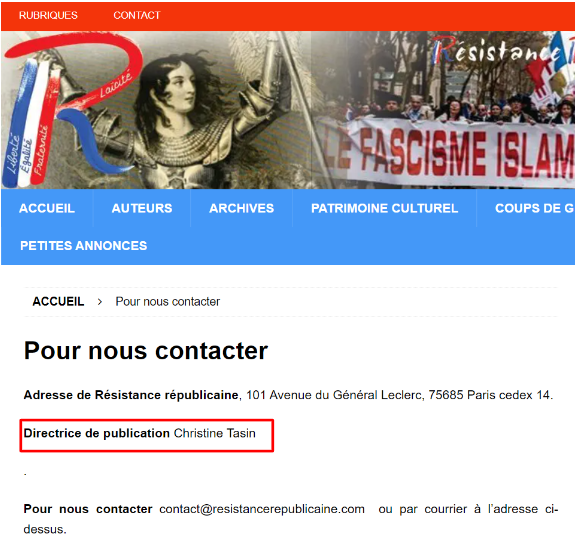 In addition to the outlet, Tasin also leads an anti-Islamic movement with the same name. Organized by Tasin and Riposte laïque, another anti-Islam organization and publication, in 2010, an Islamophobic rally took place in Paris, in which Tasin and his associates brought pork and wine to predominantly Muslim streets and demanded that Muslims return the streets back to the French people. In 2019, Tasin was convicted for justifying a terrorist act that happened in a mosque in London. In June 2017, 1 person was killed and 11 injured as a result of an attack on a mosque during Ramadan prayers. Tasin wrote about the incident that the attack was directed against terrorism or Islamization.

According to the information indicated on the website, the outlet is located on Avenue du Général Leclerc in Paris. 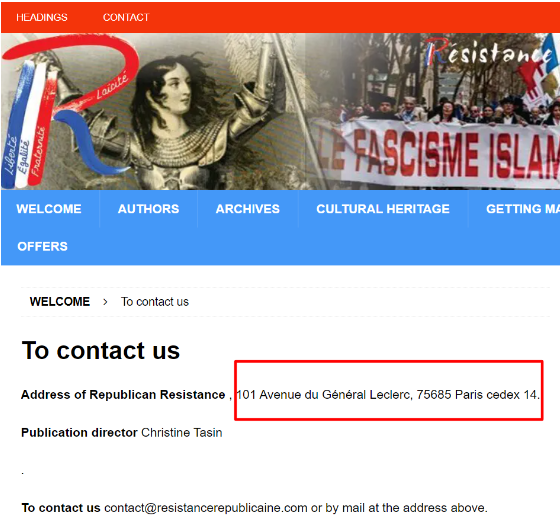 According to the information found about the website, it was created in 2019, and the current place of registration is Reykjavik, the capital of Iceland, and the IP address is located in Moscow. 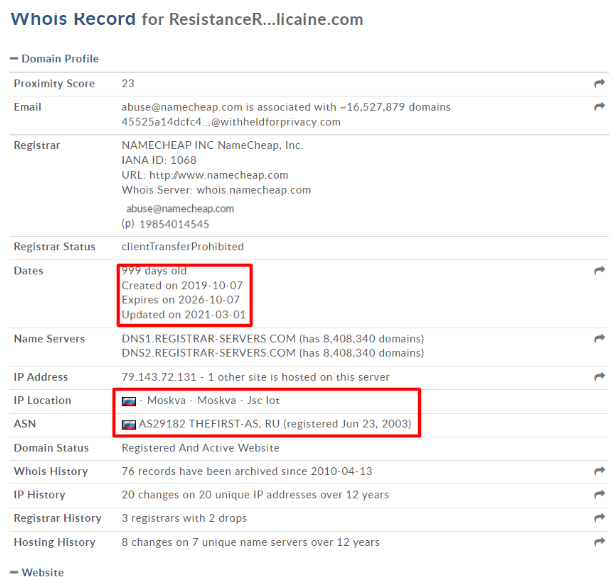 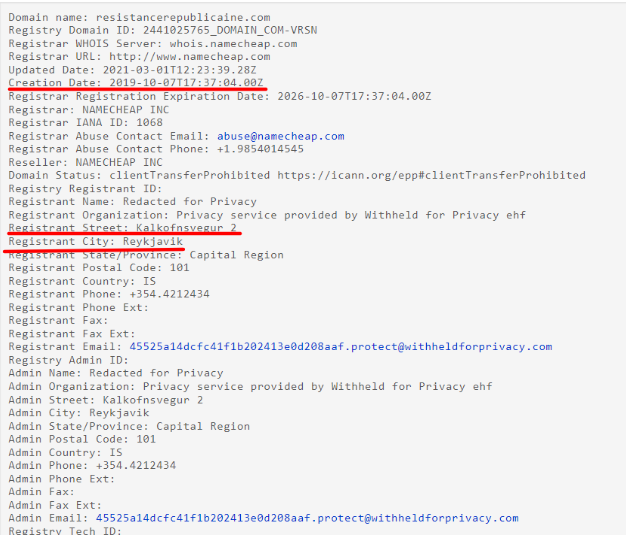 Archival screenshots of the site from October 11th, 2020, confirm that the mentioned publication did indeed exist under the domain resistancerepublicaine.com from that period. It is also interesting that Panama was indicated as the place of registration during this period. 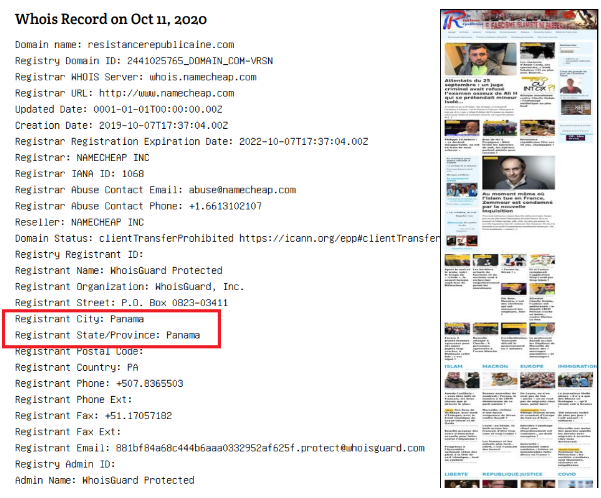 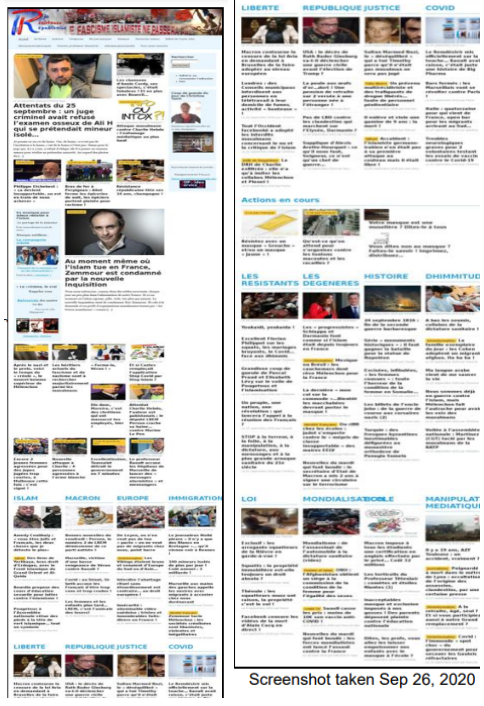 Notably, a blog with the same name and logo operated on the WordPress platform in the past, the last material published on the blog dates back to March 9th, 2011. 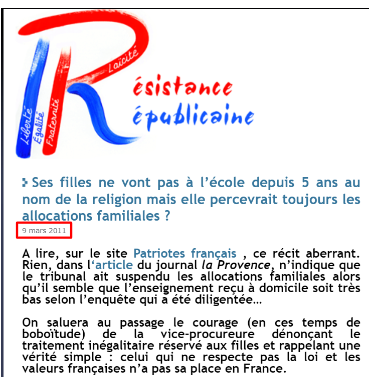 It is also interesting that Tasin, the editor-in-chief of the publication, often collaborates with Pierre Cassen. Cassen is the founder of the openly Islamophobic publication Riposte laïque.

It should also be noted that the IP address of Riposte laïque is also located in Moscow, and the place of site registration is Geneva. 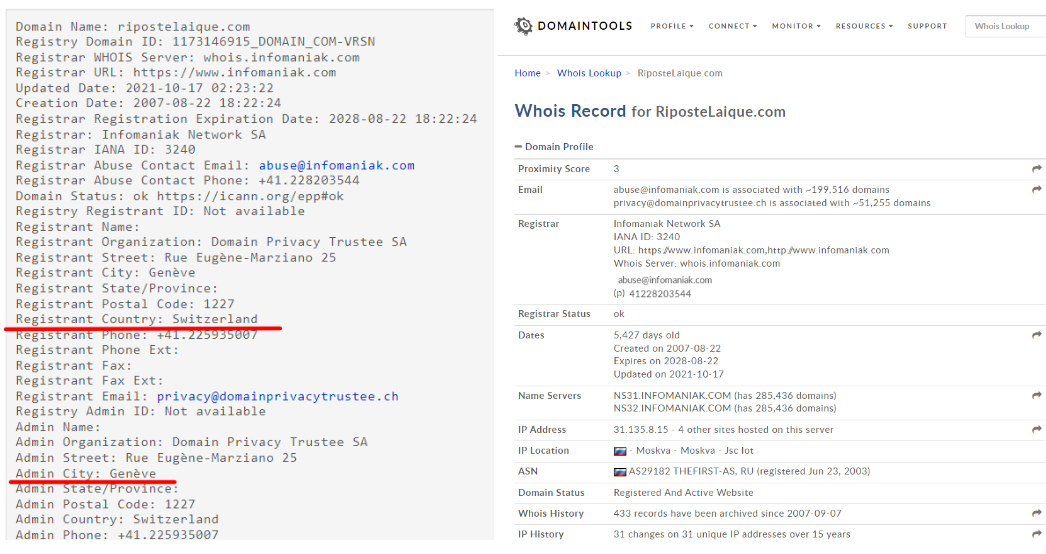 Both Islamophobic outlets have criticized Rafael Glucksmann in the past as well. Among them for the fact that he called the genocide of Muslim Uyghurs committed by China “a crime against humanity.” 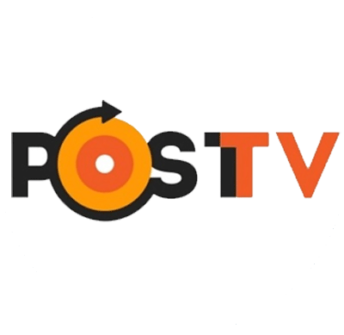